MRI image in false colours of a brain hemisphere from an MS patient (affected areas are shown in red).
Govind Bhagavatheeshwaran, Daniel Reich / NINDS / NIH
Share
Share
Artificial intelligence may enable earlier diagnosis of Multiple Sclerosis, an incurable disease that attacks the central nervous system. This could improve the efficacy of treatments designed to slow its progression.

An autoimmune disease, multiple sclerosis (MS) is characterised by a breakdown of myelin, the membrane that protects the axons of neurons. Communication within the nervous system is gradually disrupted, causing increasingly severe motor and neurological damage. Although multiple sclerosis is currently incurable, treatments are available to relieve certain symptoms, particularly if the disease is discovered early; unfortunately, however, it tends to be diagnosed at a later stage.

Automating the detection of lesions through deep learning

“The early diagnosis of MS requires MRI scans to observe biomarkers such as lesions or an abnormal volume of certain brain structures,” explains Reda Abdellah-Kamraoui, PhD student at the Bordeaux-based computing science research laboratory (LaBRI),1 in southwestern France. “The manual extraction of these data from MRI images is extremely time-consuming, which is why automated techniques have been developed.” 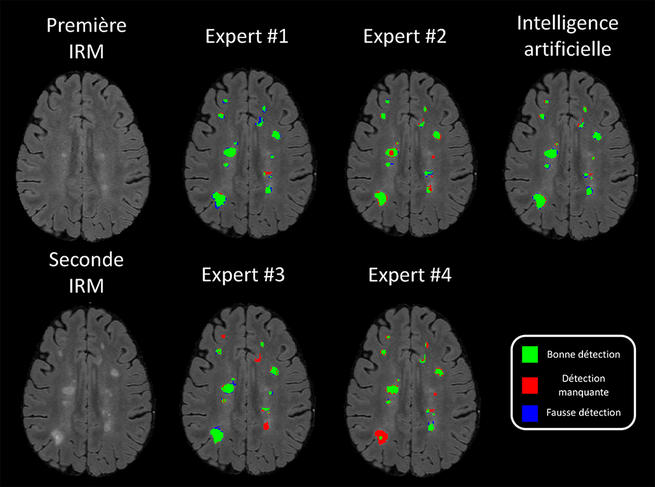 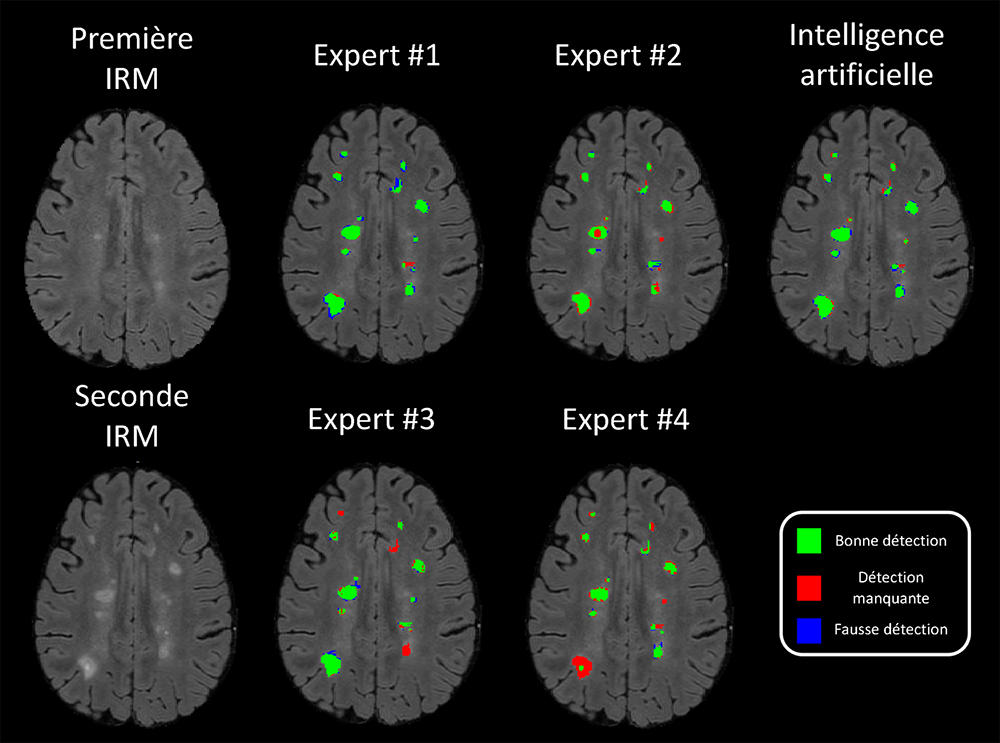 In his PhD thesis entitled “Deep learning for big data in neuroimaging”, supervised by Pierrick Coupé, a CNRS research professor at the LaBRI, Abdellah-Kamraoui’s work lies at the heart of these questions. Deep learning methods, developed for image recognition tasks, have naturally contributed to automating these complex and detailed operations. “Artificial intelligence (AI) remains a tool that can still make mistakes,” the young researcher insists. “Only physicians are therefore in a position to make the final diagnosis. However, deep learning can obtain an objective prediction in situations where two clinicians might not arrive at the same interpretation.”

Deep learning requires an accumulation of examples and data that can be used by the algorithms to train themselves to distinguish important elements on the MRI images. However, these features are not standardised because different MRI systems will produce distinct results, depending on the constructor and model. For this reason, Abdellah-Kamraoui is studying the generalisation of neural networks so that they can be trained despite such heterogeneous data. 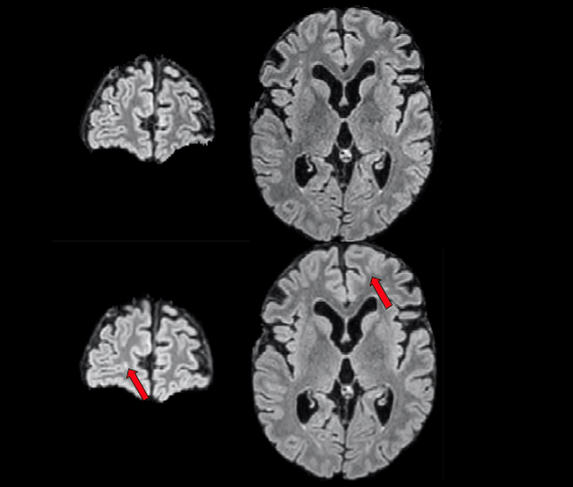 Example of a lesion that escaped the experts during the first phase of the experiment but was detected by the segmentation module and accepted by all the specialists during the second phase. The first line shows the baseline FLAIR scan and the second the FLAIR scan performed one year later. Red arrows point to the lesion of interest. 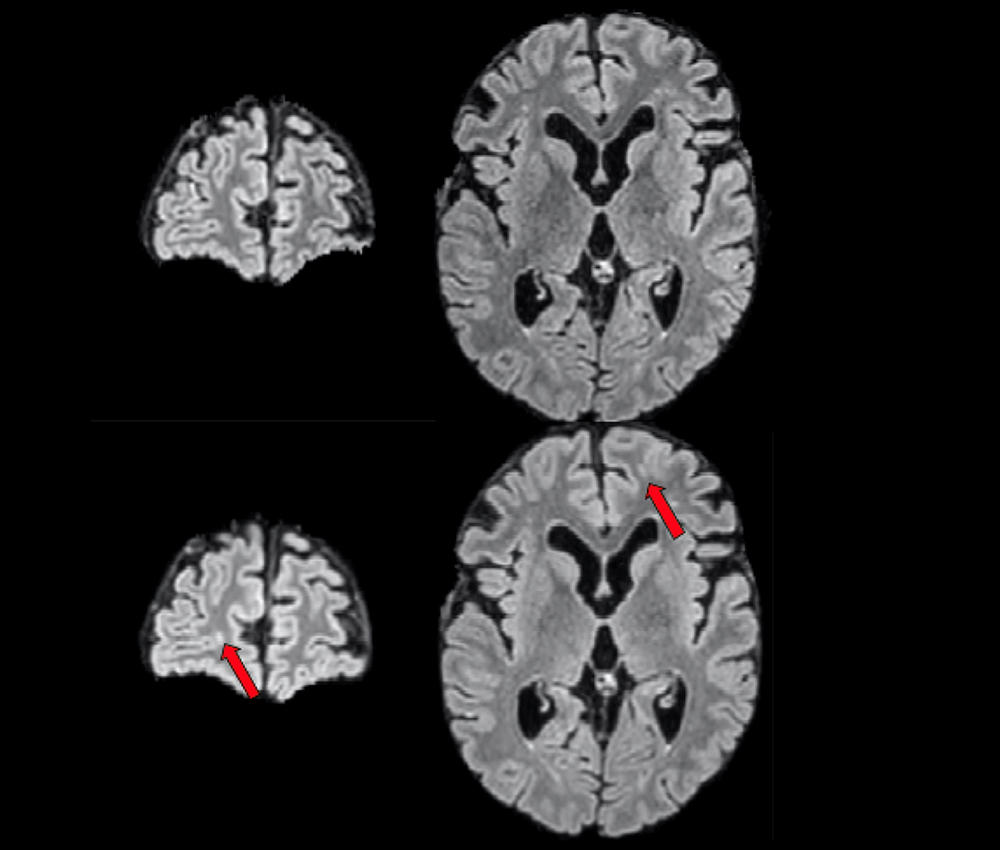 Similarly, some studies are focused on generating synthetic images to offset the lack of data to train the algorithms. The PhD student thus participated in the challenge proposed at the International Conference on Medical Image Computing and Computer Assisted Intervention (MICCAI) regarding the detection and segmentation of new lesions caused by multiple sclerosis. “The aim was to detect new lesions from two successive MRI scans of the same patient,” he explains. “The problem is that because sufferers are treated as soon as the lesions are found, subsequent MRIs will not demonstrate any major differences and we lack the data to train our algorithms. We therefore presented a technique capable of generating false MRI images that simulate the case of a patient who would not have been treated for several years, and which we use to train our AI. Abdellah-Kamraoui and his colleagues are also interested in predicting the MS Severity Score, based once again on MRI images but also on demographic and clinical data. This score is a very important parameter for clinicians.

Learning that can be generalised

The team is mainly using Python computer language and a dedicated library that enables the algorithms to read the MRI scans. In addition to deep learning, the scientists are developing transfer learning that allows an algorithm to master a task it is not precisely trained for. This may sound simple, but in fact systems based on artificial neural networks often need to start again from zero in order to learn a new exercise, even if it looks similar to the initial one.

The study of MRI findings nevertheless exceeds the framework of MS. Coupé, who supervises Abdellah-Kamraoui’s PhD work, thus created volBrain with José V. Manjón at the Polytechnic University of Valencia in Spain. This platform makes it possible to download MRI data and automatically perform numerous tasks that will facilitate the diagnosis of neurodegenerative conditions such as MS, Alzheimer’s or Parkinson’s disease.

These solutions are being integrated by Boris Mansencal, a research engineer in the LaBRI. An ANR project called DeepvolBrain is also underway to adapt the platform to the challenges of big data –  in this case the explosion in the volume of MRI data. Physicians such as Thomas Tourdias, university professor and hospital practitioner at Bordeaux University Hospital, are also involved in the project.

An aid to clinical decision-making

Other groups in France are working on AI-based diagnostic support systems for multiple sclerosis. The EMPENN2 team at the French Laboratory for Research and Innovation in Digital Science and Technology (IRISA)3 is thus participating in the PRIMUS4 programme set up by Rennes University Hospital (northwestern France), which has received funding worth €8 million through the RHU (“Recherche Hospitalo-Universitaire en Santé”) call for projects. “MS affects 120,000 patients in France, each of whom undergoes one MRI scan each year,” explains Gilles Edan, hospital practitioner and emeritus professor at Rennes University Hospital, who is closely involved in PRIMUS. “To that should be added the fact that neurologists and radiologists cannot be expert in all the diseases covered by their discipline. It is therefore impossible for each MRI image to be interpreted by a specialist in MS.”

The PRIMUS project is centered around two separate tools. The first will target support for clinical decision-making and will seek to facilitate patient compliance with the medications they are prescribed, since these can have serious adverse effects. This tool will be based on very high-quality data obtained from clinical trials conducted by pharmaceutical firms, and a closely-monitored OFSEP5 cohort of patients. “It will find patients who share as many characteristics as possible with ours, and show us how the different treatments have worked with them,” Edan adds. “We will then have reliable and personalised indicators for the probable course of the disease under treatment.”
The second PRIMUS tool will focus on MRI findings, and thanks to a huge database will supply references for physicians who are not experts in MS. Edan is delighted: “This is a real revolution. For us it will mean the memory and experience of treating 10,000 patients will be just one click away!”