Home / Articles / Hydrogen Cars for All?

Hydrogen Cars for All?

Home / Articles / Hydrogen Cars for All?

Hydrogen Cars for All?

A hydrogen-powered Hyundai fuels up at a station near the University of California, Irvine campus in Irvine (US).
STUART PALLEY/The New York Times-REDUX-REA
Share
Share
The “European Fuel Cell Car Workshop 2017” is being held in Orléans (France) March 1-3, bringing together researchers and industry. We take a closer look at this new technology and its advantages.

The hydrogen car heralds the age of “zero emission” vehicles. The “fuel cell electric vehicle,” to give it its technical name, runs on electricity, in the same way as standard electric cars (or “battery electric vehicles”). The difference is that in a hydrogen vehicle, the electricity is generated directly on board from hydrogen by a fuel cell (FC).

A cell, more efficient than a battery

This type of module, with a capacity of 10 to 30 liters, is made up of several stacked “cells,” that each comprises two electrodes— an anode and a cathode— separated by an electrolyte in the form of a polymer membrane. The electrochemical reactions between the hydrogen injected at the anode and the oxygen at the cathode result in the production of electricity and water. As a result, fuel cells emit only water meaning that hydrogen cars, like all electric cars, represent an interesting clean alternative to diesel and petrol vehicles.

Compared to the latter, however, FC vehicles have several advantages. Refueling with hydrogen takes the same time as with regular fuel: between 3 and 5 minutes, compared to the several hours needed to charge a battery electric car. Furthermore, their fuel range is similar to that of diesel vehicles: a single hydrogen refill provides up to 600 kilometers of travel, or 2 to 3 times greater than for battery electric cars.

Some models of FC vehicles are in fact already on sale: the Toyota Mirai was launched in Europe in late 2015, the Hyundai ix35 has been sold since 2015, and the Honda Clarity came out in September 2016. What’s more, since 2013, the French postal service in two French communes (Audincourt and Périgny) have been using small FC vehicles, developed as part of a project called MobyPost by the CNRS research federation FC Lab.1 Finally, in late 2016, Toyota announced plans to commercialize FC buses in Tokyo.

Refueling with hydrogen takes the same time as with regular fuel: between 3 and 5 minutes.

But large-scale commercialization of FC vehicles is still hampered by a number of obstacles. A major one is cost. A Mirai for instance will set you back at least €79,200, far above what the average French people spend on a new car (€25,000). Moreover, the mean lifetime of a FC vehicle is only 4100 hours, giving a total distance greater than 150,000 km. To match the life cycle of a diesel engine (300,000 km), they would have to operate for 7000 hours without deterioration. A further problem is that hydrogen is currently obtained chiefly from fossil fuels such as coal or gas, a method of production that is hardly green… Finally, there are currently only around 15 hydrogen fueling stations throughout France. 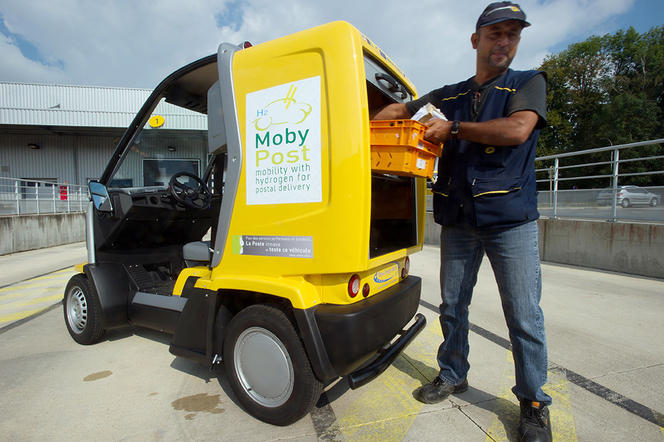 A postman pulls out some courrier from a new La Poste's vehicle working with a hydrogenic motor at the postal center of Audincourt. 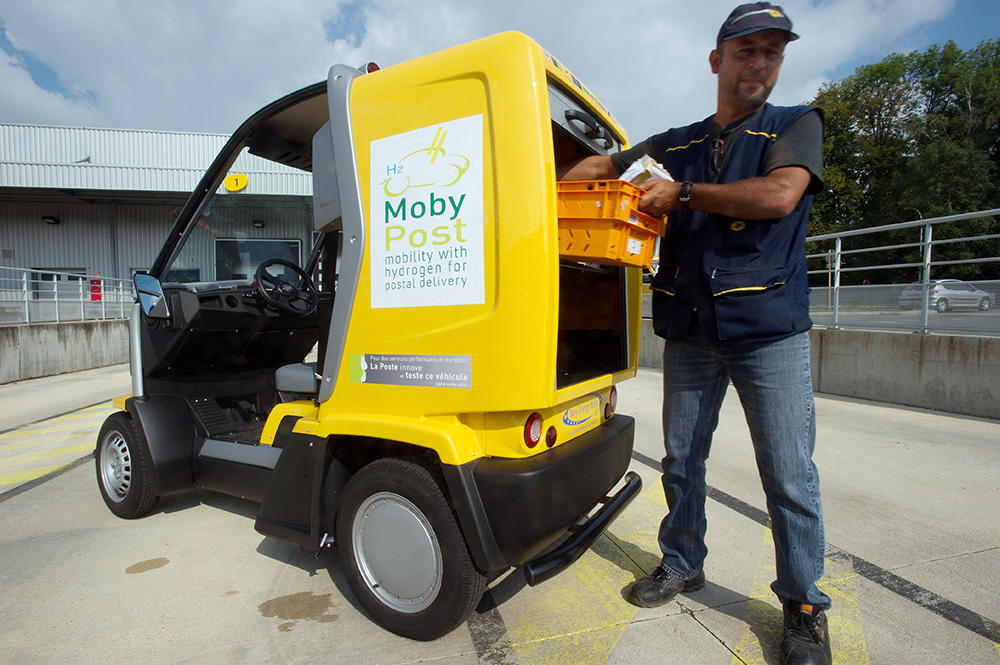 A postman pulls out some courrier from a new La Poste's vehicle working with a hydrogenic motor at the postal center of Audincourt.
S. BOZON/AFP
S. BOZON/AFP
Share
Share

Nevertheless, research continues apace, with several hundred teams throughout the world, chiefly in Japan, the US and Europe, working tirelessly on improving the competitiveness of FC technology.
“This is one of the busiest fields of research in the world,” says Pascal Brault,2 physicist and organizer of the conference held in Orléans March 1-3 which brings together 80 European researchers and several representatives of major manufacturers: Toyota, BMW, VW, Audi, Daimler...

Large-scale commercialization of FC vehicles is still hampered by a number of obstacles. A major one is cost.

In France, such research is being conducted by no less than 77 teams from the CNRS and various universities, along with another 30 teams with the CEA (French Alternative Energies and Atomic Energy Commission) and manufacturers, all working together within a CNRS research group (GdR) called “HySPàC.” In addition, this research receives specific funding from the European Union, with €665 million of funding for work on fuel cells and hydrogen technologies being allocated for the period 2014-2020 by the European FCH-JU agency (Fuel Cells and Hydrogen Joint Undertaking).

The road to competitiveness

One way of reducing costs is to eliminate some of the components currently used in FCs, which contribute to their prohibitive price. This applies in particular to platinum, a noble metal used as a catalyst to speed up the chemical reactions that occur inside the FC. “This element is practically as expensive as gold, costing €30.5 per gram compared with €30.7 for gold. It is also a rare and strategic metal, with resources being concentrated almost entirely in South Africa and Russia,” says chemist Deborah Jones,3 co-organizer of the Orléans event.

Thus, a number of teams located around the globe—and at the CNRS—are attempting to reduce the quantity of platinum used in FCs, or even to eliminate it entirely by using catalysts without noble metals, and which rely instead in particular on iron, which is far less costly (€0.16 per kilogram versus €30.5 per gram). And platinum is not the only problem: the high price of FC vehicles is also due to the low volumes of cell components currently being manufactured. These elements will have to be produced in greater volumes; such a scale-up, using automated production facilities, should see a significant drop in unit price. 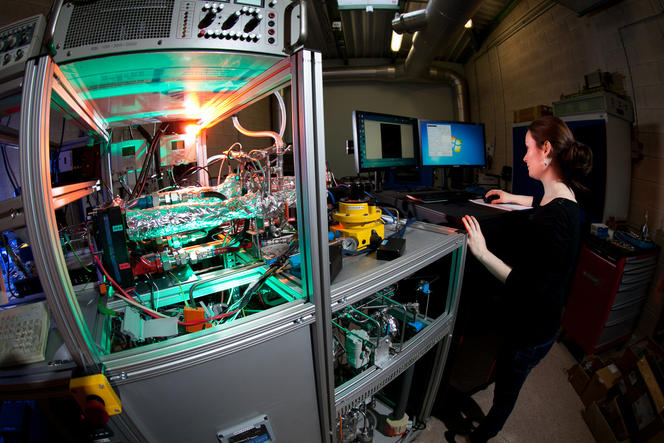 Fuel cell operated on a test bench at the FCLAB. 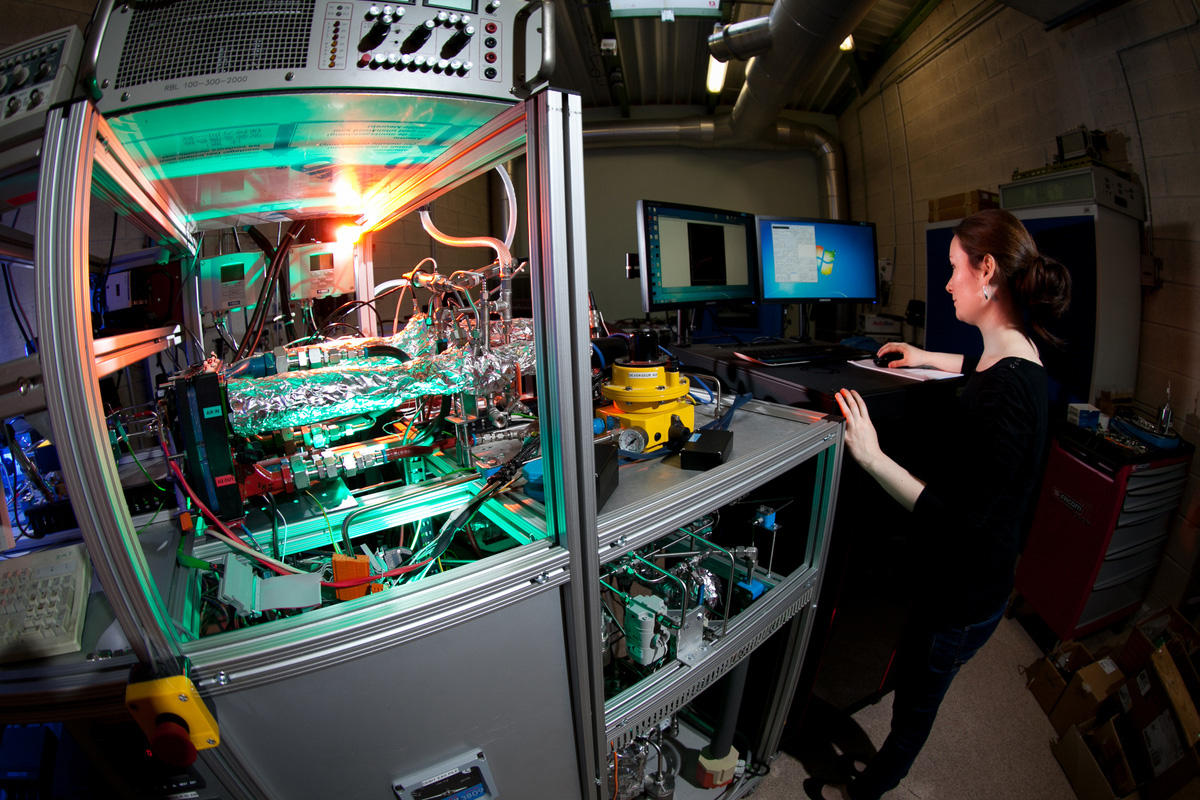 Mass production on the horizon

This is indeed the goal of the ambitious European “Volumetriq” project coordinated by Jones and intended to develop a European manufacturing base for all FC components (membranes, electrodes, membrane-electrode assemblies, and so on), as well as the necessary automated production methods. “This project, launched in 2015 and funded to the tune of €5 million, involves many component companies as well as the car manufacturer BMW,” says Jones.

Limited lifetime is another major obstacle to the development of the hydrogen vehicle sector. It is due primarily to 2 factors associated with the way in which the FC works: the effect of hydration-dehydration cycles, which are detrimental to the mechanical stability of the membrane, and the production of chemical species known as free radicals, which reduce the chemical stability of the membrane. These two problems can be solved through the use of mechanical supports together with chemical elements that trap the free radicals.

Finally, a further important area of FC vehicle research is the development of economically viable methods of producing clean hydrogen. H2 can in fact be produced without natural gas via electrolysis of water using “green” electricity generated by wind turbines or solar panels. For the moment, however, these technologies are 30% to 65% more expensive than production involving natural gas. To remedy this, researchers must successfully optimize the yield of electrolyzer systems and improve hydrogen storage systems, two areas on which Daniel Hissel and his FCLAB colleagues in Belfort, for instance, are currently working.

Research on hydrogen cars is clearly in full swing. By some estimates, more than 100,000 FC cars could be in use worldwide by 2025.

Opinion
The thousand and one facets of glass
Chemistry