How imaging is revolutionising biology

How imaging is revolutionising biology

Architecture of mouse neurons, revealed by an artificially expressed jellyfish fluorescent protein (confocal microscopy).
Sébastien MARAIS/Daniel CHOQUET/Elena AVIGNONE/Bordeaux Imaging Center/CNRS Photothèque
Share
Share
For the launch of the Year of Biology, the neurobiologist Daniel Choquet explains how progress in imaging has contributed to the current explosion of knowledge in the life sciences.

Is it fair to say that advances in imaging technology have brought about a new era in the life sciences?
Daniel Choquet:1 Absolutely. Imaging is part of a series of revolutionary methods that are rapidly expanding knowledge in biology. I like quoting a remark by the South African biologist Sydney Brenner: "Progress in science depends on new technologies, new discoveries, and new ideas, probably in that order." This is especially true in biology, for seeing new things enables us to raise fresh questions. Advanced imaging technologies have helped increase our exploration capacities.

What are the milestones of this imaging revolution?
D. C.: Imaging has a long history, as the first microscopes go all the way back to the late sixteenth century. But this new revolution can be dated to the 1980s with the use in biology of fluorescent proteins, which can label molecules and thereby help study the mechanisms and processes at work in cells. Another milestone was the development of confocal microscopy and multiphoton microscopy, which provide three-dimensional images of tissue samples. Another key moment was the emergence, beginning in 2006, of super-resolution microscopes which can generate images of objects smaller than 250 nanometres, in both living and functioning tissue. 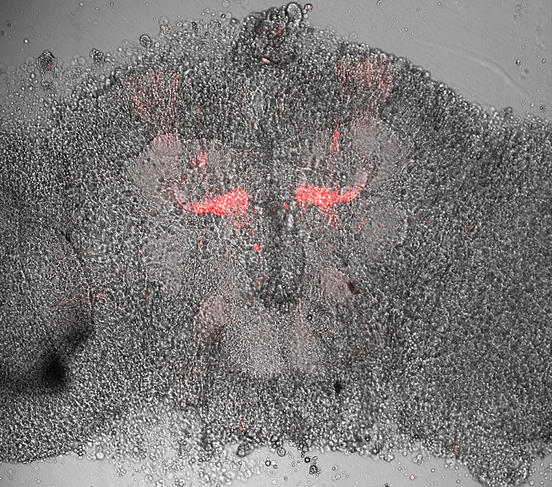 Living brain of a fruit fly observed using a two-photon microscope. In red, the axons of a subpopulation of mushroom body neurons (fluorescent membrane marker myr-Tomato), located in the central region of the brain, which are part of the olfactory circuit and are involved in the memorisation process. 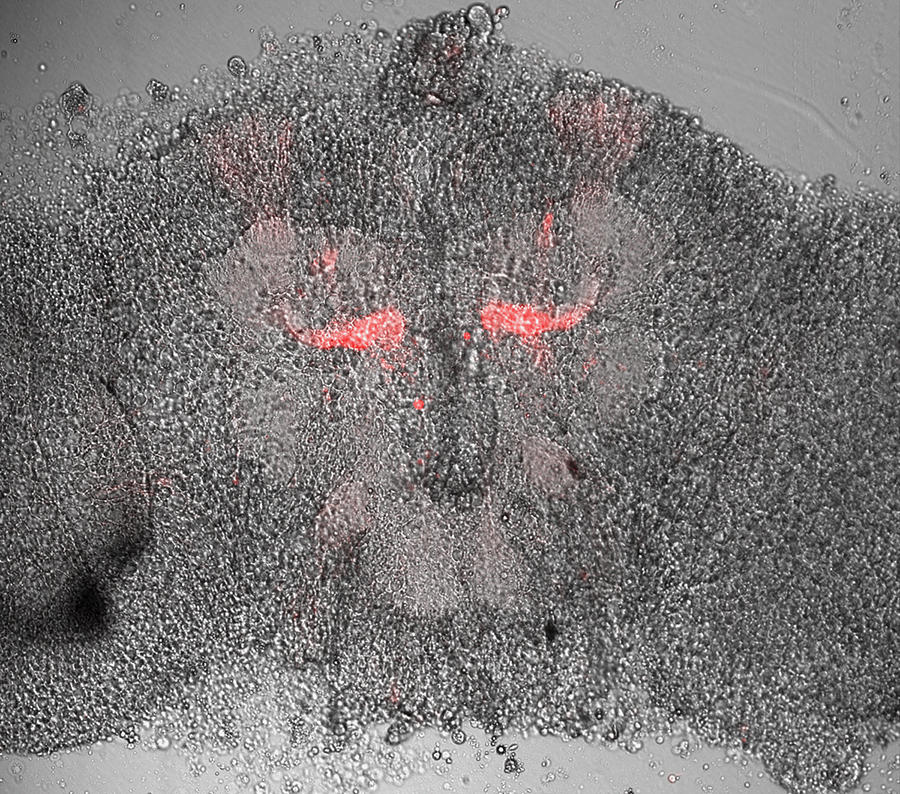 Living brain of a fruit fly observed using a two-photon microscope. In red, the axons of a subpopulation of mushroom body neurons (fluorescent membrane marker myr-Tomato), located in the central region of the brain, which are part of the olfactory circuit and are involved in the memorisation process.
Caroline MEDIONI / IBV / MICA / CNRS Photothèque
Caroline MEDIONI / IBV / MICA / CNRS Photothèque
Share
Share

What objects and processes do these new technologies make possible?
D. C.: I will use my favourite cells, neurons, as an example. The cell body of a neuron is approximately 20 microns. It is therefore within reach of conventional microscopes, which are limited by diffraction to a resolution of approximately a quarter micron. The discovery that the brain is not a gelatinous mass, and instead consists of individual cells, was actually made in the late nineteenth century by the Spanish neuroscientist Ramón y Cajal.

A synapse, or the connection between two neurons, typically measures one micron, which is close to the limits of conventional microscopy. It therefore cannot provide high-precision measurement or decode their complex organisation. With a resolution of one hundredth of a micron, super-resolution microscopy can observe not only synapses in action, but also the individual proteins behind a nervous signal.

These technologies enable us to study the dynamics at play when neurons are communicating. For example, my team has shown that synaptic receptors are not fixed to the membrane, but are instead constantly moving about.

Electron microscopy has also seen spectacular advances. What does this mean for the life sciences?
D. C.: Electron microscopy has always been important for biology. It enabled the first visualisation of viruses, although the role of this technology has often been underestimated. From the 1980s, electron cryomicroscopy brought about another revolution, namely the ability to study the structure of proteins in 3D with a resolution on the order of the atom. What's more, it makes it possible to see the different conformations adopted by these proteins, thereby helping us elucidate the functioning of these molecular machines while they are performing their task. 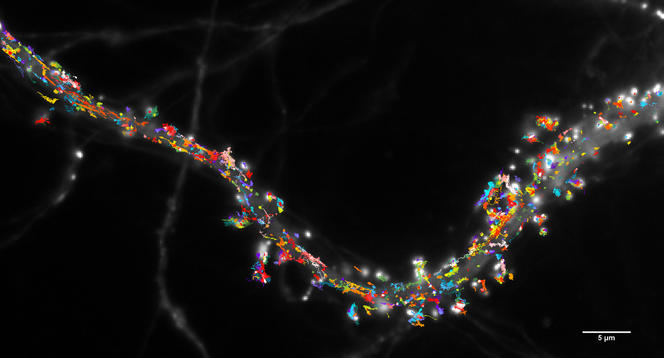 Daniel Choquet's team has shown that synaptic receptors are not attached to the membrane. Visualisation of the trajectories of neurotransmitter receptors, followed by single molecule detection on the surface of rat hippocampal neural cultures. 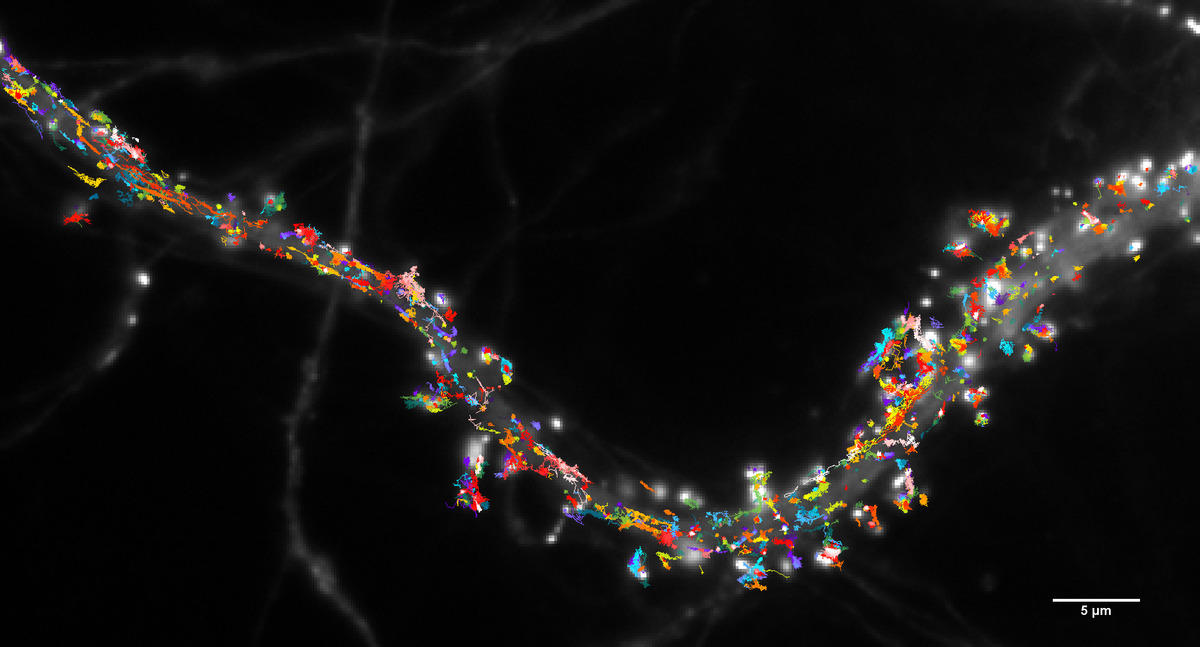 Another recent development involves imaging techniques for studying processes at the level of entire organs or living animals. What do they enable you to do?
D. C.: This is a very important point, and here we are on the other side of the spectrum of cryomicroscopy. Thanks to labelling techniques and the miniaturisation of microscopes, we can obtain imaging of an entire animal while it is in action.

For example, we can install a microscope weighing a few grams on a rat's head, and let it interact with its congeners or move through a labyrinth. This shows which neurons and regions of the brain are activated during a particular activity. It has already yielded important discoveries, such as the functioning of space and place cells, the neurons that enable us to remember specific locations, and to return to them at a later time.

These technologies show which cells are activated when an animal discovers or revisits an environment.

In other words, you can see memory as it is forming.
D. C.: Precisely, this is the brain in action. This research can also be used for other organs, such as the spleen and the thymus gland. We can study organs affected by various diseases, and identify differences as compared with normal functioning. This research can also be coupled with genetic engineering in animals.

So new imaging technologies give you access to all scales. How do you coordinate this information?
D. C.: This is a challenge of the future: how can we produce knowledge using a continuum of technologies that allows us to go from the atom to the human, from the angstrom to the metre? In an ideal world, we would be able to describe an entire human being at the molecular scale. This may be possible at some point, but today it is the stuff of science fiction. What we can do now is correlate the different scales of observation. Take for example a mouse performing a task. I discover that a specific part of the brain is active, and that a particular neuron in that region is communicating with its neighbours. I can collect a tissue sample and observe this neuron using super-resolution microscopy in order to see which synapses are active, and how they behave. I can then freeze these synapses and examine them with an electron microscope to study the 3D structure of membrane proteins, and to see how this structure changes when the neuron is activated. By overlapping correlation on different scales, we can move across scales and understand, for instance, which changes in protein conformation are connected to which behaviours in the animal. 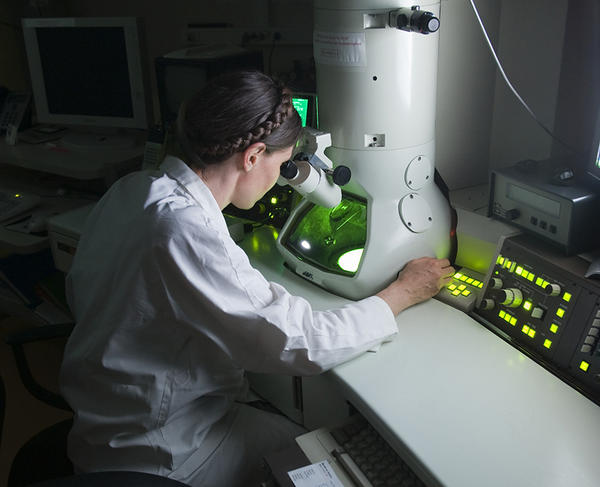 Transmission electron cryomicroscopy applied to the study of DNA conformations. 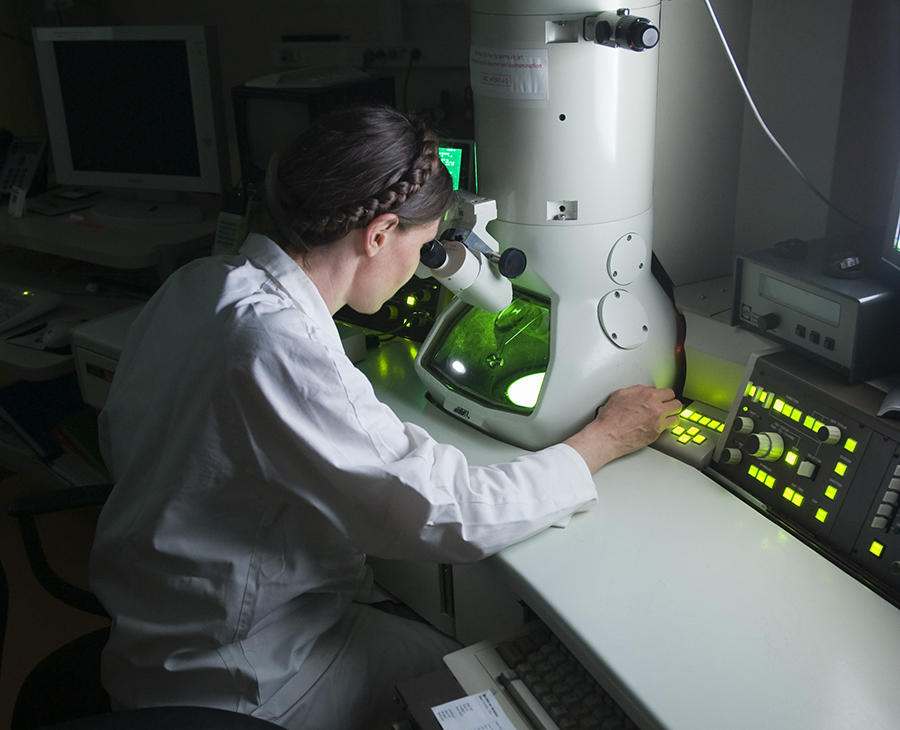 What effect do these new technologies have on our approach to diseases, such as Alzheimer's and Parkinson's?
D. C.: Absolutely fascinating things are underway. In particular, there is a new method that combines imaging and transcriptomics, the study of all genes expressed in a cell or tissue. This enables us to study why certain individuals are severely affected by neurodegenerative diseases while others are not. Today we can image these differences between healthy and sick individuals, something that will be decisive in developing therapies. This is a step towards personalised medicine.

We are still in the midst of the Covid-19 pandemic. Can these imaging technologies contribute to the fight against infectious diseases?
D. C.: They can indeed. First, it is thanks to electron microscopy that we know what the virus looks like. If we only had its genetic sequence, we would be half blind. For instance, we would not be aware of the importance of the Spike protein, which becomes quite obvious when we see it at the tip of SARS-CoV-2 spikes. Imaging also shows us the parts of the protein that medicine or neutralising antibodies should target in order to block it. Another example is research on Covid-19 symptoms. To study them we must know which tissues are infected, with imaging being decisive in this effort. 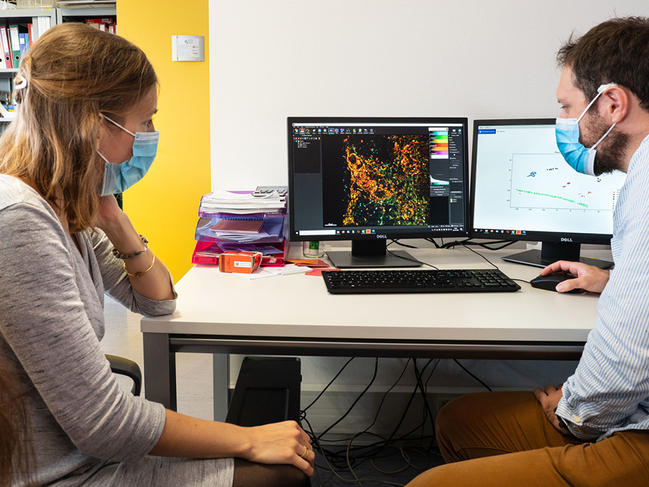 By using cutting-edge multiplex imaging, in vivo, and transcriptome imaging, the Toulouse Institute for Infectious and Inflammatory Diseases (INFINITY) studies the capacity of neurons and immune cells to communicate in connection with the intricate regulation of inflammatory response. 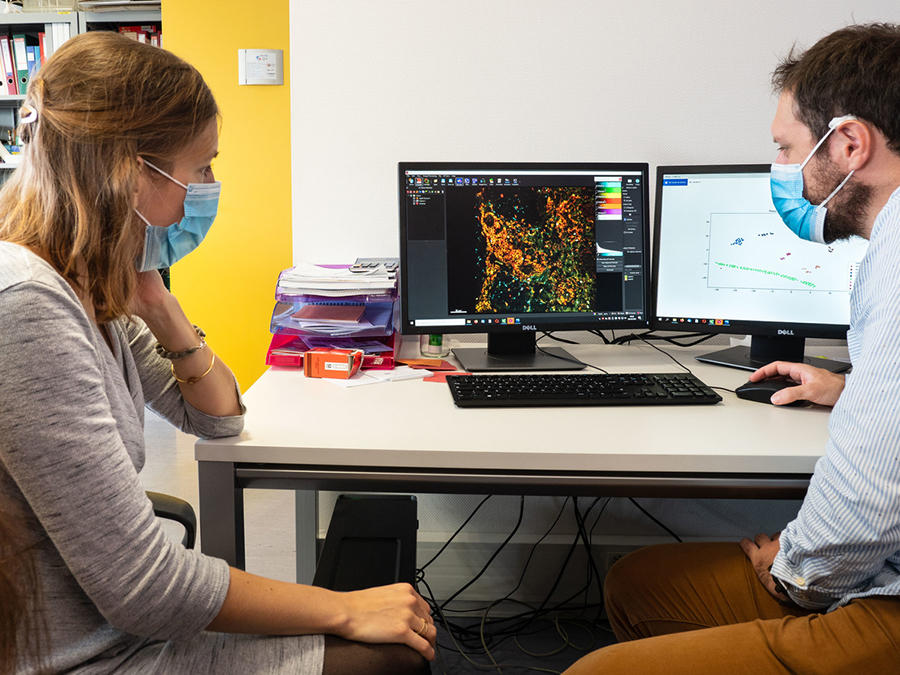 Supercomputers, artificial intelligence, learning algorithms... How can computing power and analysis be combined with imaging to understand the living world?
D. C.: We are in the midst of a boom. Artificial intelligence is invading our everyday lives without us knowing, and biology is no exception. It is indispensable if we want to study numerous parameters on multiple scales. The quantity of information produced is way beyond the grasp of the human brain: without computational resources, it would be impossible to analyse these petabytes of information. A particularly useful application involves teaching artificial neural networks to recognise protruding shapes. This is used widely in cryomicroscopy, as thousands of images are needed to determine the three-dimensional structure of proteins.

In your opinion, what will be the next technological revolution in imaging?
D. C.: If I knew, I would have invested already! I think multi-scale analyses will increase. In situ imaging to study organs while they are functioning will become ever more important. Finally, there will be progress in the automation, robotisation, and miniaturisation of microscopes. These could eventually be small enough to enter the body and observe certain organs. What I expect from these advances is a better understanding of living things, and the development of personalised medicine. I think new therapies adapted to each genetic heritage will emerge. Concerning the brain, I think imaging will help with early detection of neurodegenerative diseases, as well as the development of treatments for disorders such as autism.