Home / Articles / How did Our Cells Acquire Respiration?

How did Our Cells Acquire Respiration?

Home / Articles / How did Our Cells Acquire Respiration?

How did Our Cells Acquire Respiration?

WIRE_MAN/FOTOLIA.COM
Share
Share
Biologists suspected that our cells had acquired respiration by ingesting free-living bacteria that they have since always contained. Recent studies suggest infection rather than ingestion.

How did our cells first appear? More specifically, how did they acquire their mitochondria, the organelles that are essential to cell metabolism? This question has intrigued biologists for almost a century. In February, a CNRS team offered an explanation that involved… infection by a pathogenic bacterium!  This bold theory is now dividing scientific opinion.

The game is thought to have been played out around two billion years ago, when so-called eukaryotic cells first appeared as the constituents of all animals and plants. Unlike prokaryotic cells such as bacteria, eukaryotes are endowed not only with a nucleus that contains almost all their DNA, but also—and above all—with two very important structures: the mitochondria and, in plants and algae, the chloroplasts. Acting as a true, internal powerhouse, the mitochondrion assures cellular respiration, allowing the production of energy that can be used by the cell. The chloroplast, on the other hand, is the seat of photosynthesis, a process that uses light energy to synthesize sugars from atmospheric CO2.

The hypothesis of symbiosis is widely accepted...

Because mitochondria and chloroplasts are semi-autonomous structures with their own gene pool, the US microbiologist Lynn Margulis postulated in 1970 that they had appeared during evolution, following the ingestion—also referred to as endocytosis—of certain free-living bacteria by other, single-cell prokaryotic organisms. The free bacteria initially had respiratory (mitochondria) or photosynthesis (chloroplasts) capacity. This chloroplast endocytosis may have occurred some 1.5 billion years ago, possibly after that of mitochondria. The "ingested" bacteria were then maintained in their hosts thanks to a mutual cooperation that was beneficial to both parties. This is known as a symbiotic relationship: the bacterium supplied the host cell with its energy generation process, and the cell reciprocated by protecting the bacterium and feeding it the nutrients necessary for its functioning. It is this theory of endosymbiosis that is accepted today by the majority of biologists. 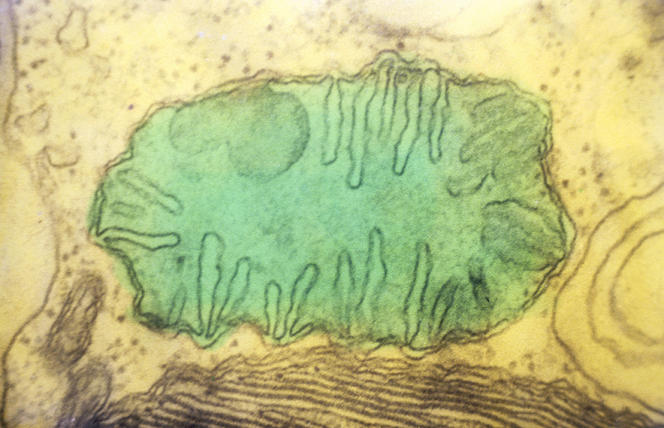 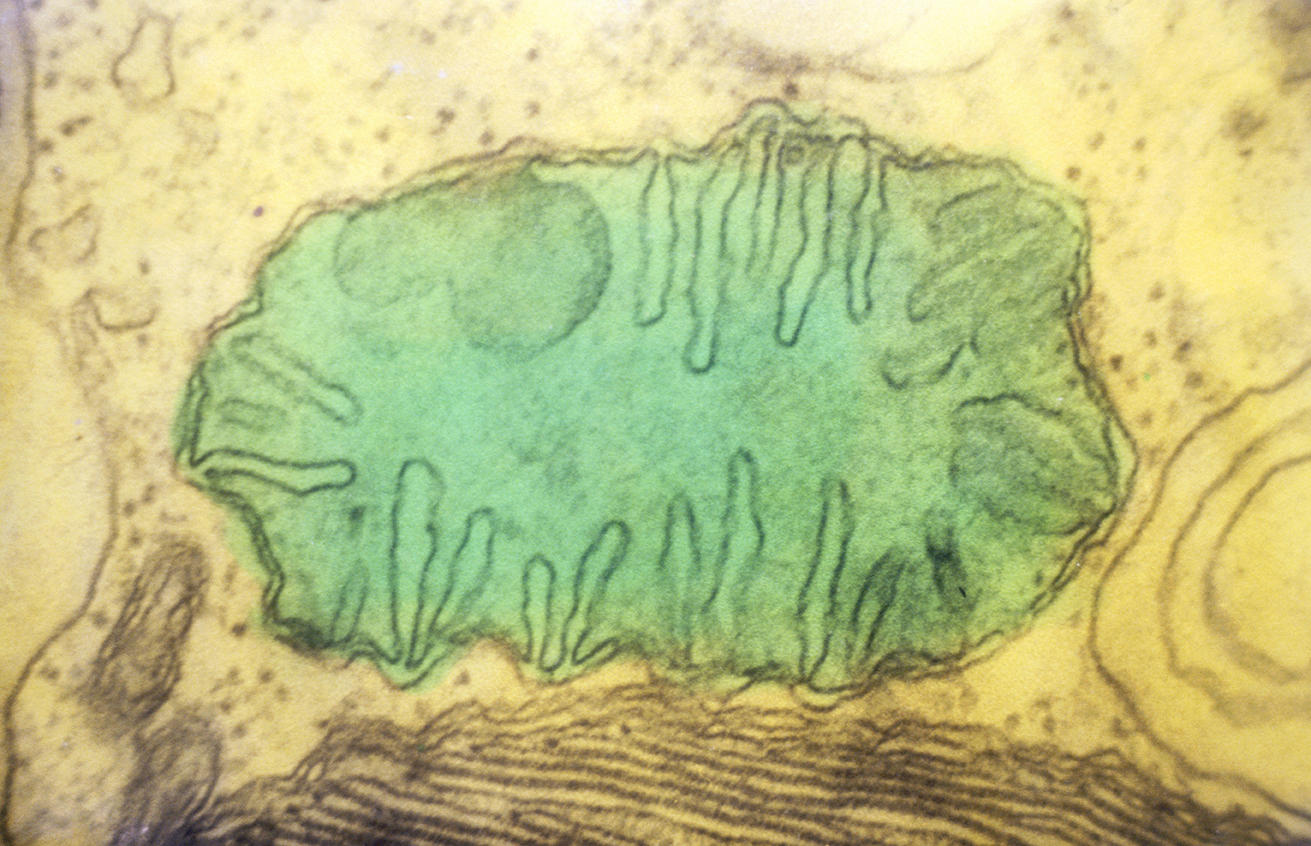 … but not always fully understood

Certain points nevertheless remained unclear such as the precise nature of the primary cell that "swallowed" the bacterium, the exact mechanisms for this internalization and above all, how the bacterium was initially able to survive inside a theoretically hostile host. Indeed, cells have highly aggressive immune mechanisms designed to destroy any intrusive elements. In their article published in February,1 the Lille-based biologist Steven Ball2 and his colleagues were indeed able to propose a mechanism that could explain how the bacterium might have dealt with the defenses of the host cell.

The mitochondrion: a pathogenic origin?

Their theory is quite astonishing in that it postulates that the ancestral cell of eukaryotes acquired its first mitochondrion not by capturing a free bacterium but by being infected by a pathogen accustomed to living inside cells and naturally endowed with mechanisms that allowed it to thwart the cell's immune defenses.

We reached the conclusion that the mitochondrion was directly derived from a bacterium of the order Rickettsiales.

"In fact, by assembling a variety of recent phylogenetic (study of the relationships between different living beings) and molecular biology findings, we reached the conclusion that the mitochondrion was directly derived from a bacterium of the order Rickettsiales, one notable member of which is the causative agent for typhus (Rickettsia prowazekii), a serious contagious disease in humans", explains Ball.

Indeed, previous studies had already mentioned the relationship between the mitochondrion and Rickettsiales—without taking it seriously. "This is firstly because it was thought that the Rickettsiales had appeared much later, after eukaryote cells. In addition, no one could imagine that the prokaryote ancestor could be infected by other pathogenic bacteria." The data described in the article by the Lille team now calls these presuppositions into question. 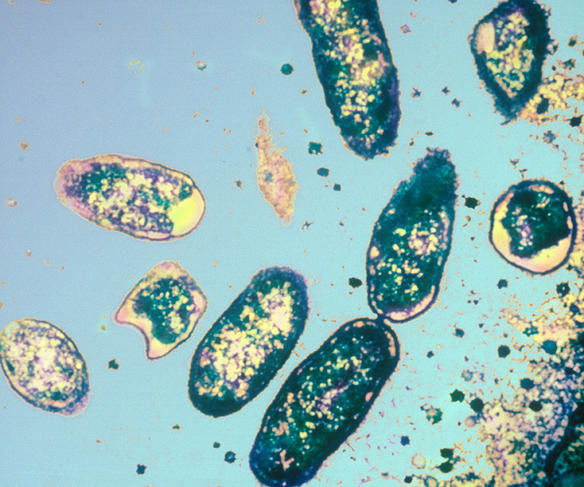 Colorized micrograph of Rickettsia bacteria, taken with an electron microscope. 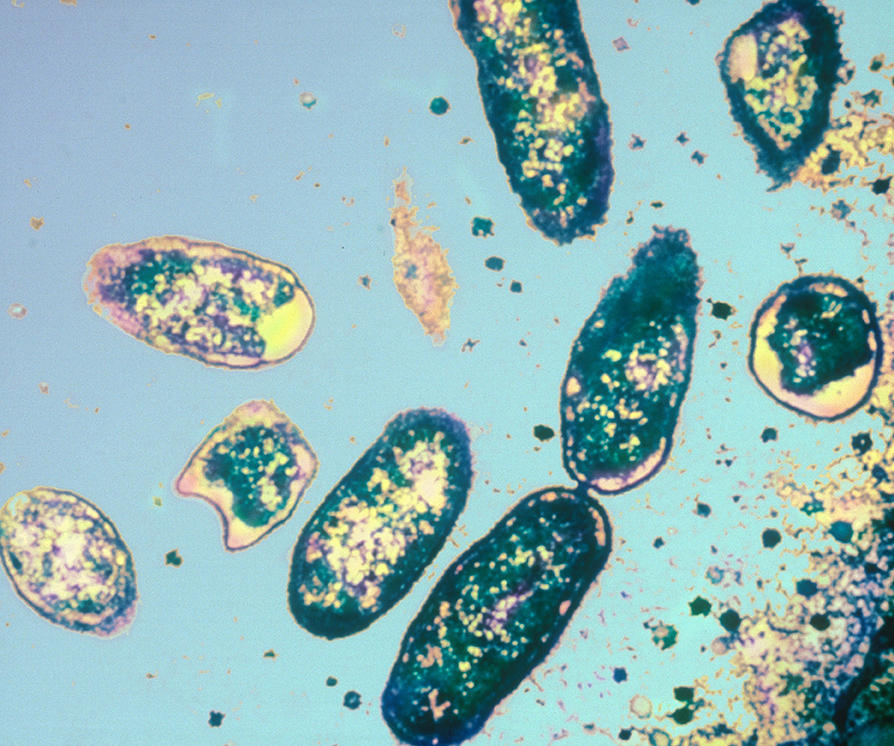 Yet the mitochondrion is not the only one involved! In a study published two years ago, the scientists developed a similar theory regarding the chloroplast. They suggested that it also resulted from the infection of an ancestral cell by a pathogenic bacterium, but via a different mechanism, which involved a tripartite symbiosis rather than bipartite (bacterium plus host cell).

"We confirmed that the chloroplast did indeed derive from a free bacterium capable of photosynthesis," points out Ball. However—and this is where our theory is innovative—this cyanobacterium was assisted by a third actor, which happened to be the intracellular pathogen. In this case, it was a bacterium from the order Chlamydiales, which are also responsible for a variety of human and animal diseases (chlamydiosis, etc.)".

According to this theory, the pathogen would have protected a cyanobacterium—the future chloroplast—from the defenses of the host eukaryote. At the same time, it supplied the host cell (by transferring its genes to the cell's genome) with the functions necessary to utilize the energy molecules generated by photosynthesis. 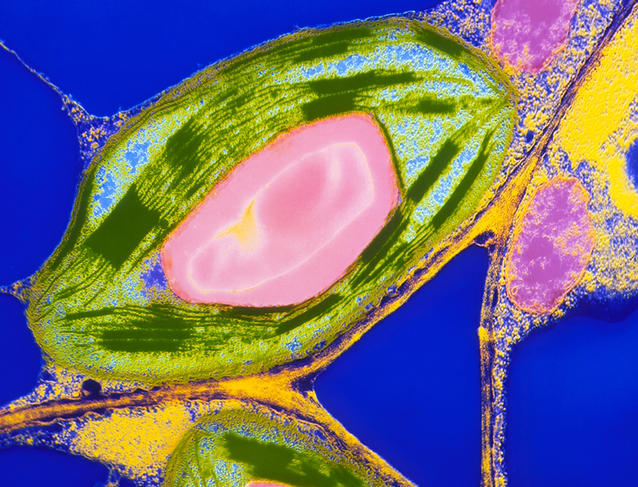 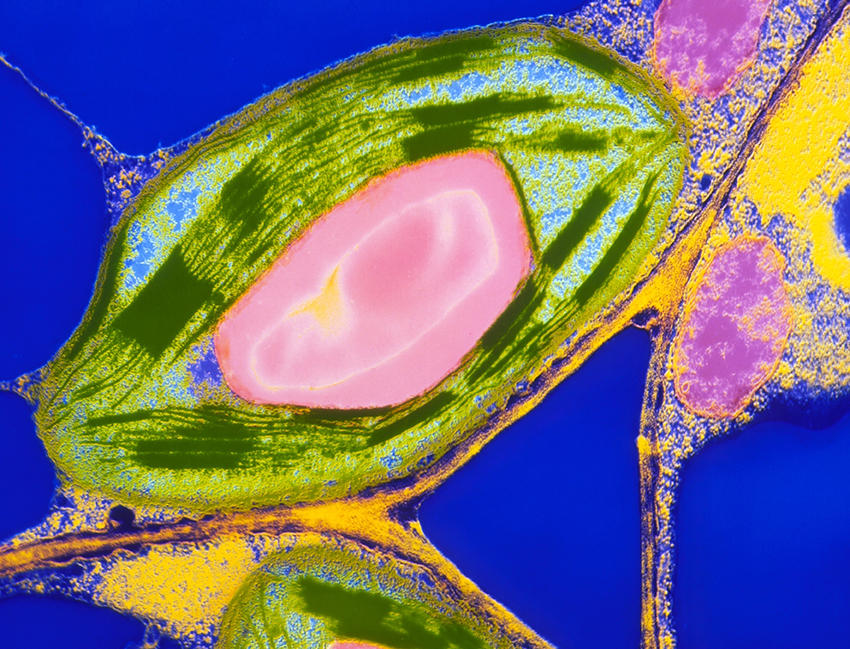 A plausible but controversial theory

"The result of a ten-year effort, this work opens a new and very exciting era in research on the origins of the mitochondrion and chloroplast, and hence those of eukaryotic cells", comments Ball. "Indeed, these findings are very interesting, and their theories are extremely plausible," confirms Ben Field, a specialist in chloroplast biology.3

On the other hand, at the LBBE in Lyon (France), Manolo Gouy4 is not quite so enthusiastic: "These are only hypotheses that are not supported by experimental findings. They need to be confirmed… Although it is clear that the mitochondrion and chloroplast are of bacterial origin, I do not think there is sufficient evidence at the moment to allow us to specify the mechanism by which the bacterium entered the host cell."

We expected that, because this is a major paradigm shift.

The theory put forward by Ball and his team has obviously not received unanimous approval from other biologists; it has even triggered a lively debate. "We expected that, because this is a major paradigm shift," retorts Ball. In order to confirm or disprove their ideas, he and his colleagues are planning further studies " not only in phylogenetics, but also in experimental microbiology and biochemistry."

It is indeed crucial to find out how the ancestral cell of eukaryotes managed to ingest a whole microorganism endowed with its own gene pool. Solving this mystery is not just about fundamental research, as Ball explains: "It will then be possible to engineer, in cells, not only one or a few genes but a large number of them, or even whole cellular structures. This would, for example, allow plants to fix atmospheric nitrogen or render microorganisms capable of hydrogen production, which is a potential fuel for the future".

0
The Effects of Ageing on Visual Perception Previous
Ramanujan: The Man Who Knew Infinity Next

1 comment
RSS feed
Interesting article. However, readers may be interested in some writings on the mitochondrion, though not named as such then, by early French fiction and science writers (Savinien Cyrano de Bergerac and Paul Poitier) https://www.genomicseducation.hee.nhs.uk/news/item/249-genomes-microbiomes-and-mitochondria Alain Li-Wan-Po a.liwanpo@gmail.com
To comment on this article,
Log in, join the CNRS News community
Log in
Register