First Exoplanet Challenge for a Nanosatellite

First Exoplanet Challenge for a Nanosatellite

PicSat will remain in orbit for one year. In order to maximize contact with the nanosatellite, scientists will call on the services of radio amateurs throughout the world.
The PicSat Team /LESIA/OBSPM
Share
Share
With their small size of several tens of centimeters and relatively low cost, nanosatellites—known as “CubeSats”—open up new scientific vistas. PicSat, launched on January 12, will be the first such instrument dedicated to the observation on an exoplanet.

Imagine a satellite the size of a bottle of water. This is the principle that enables CubeSats, small modules with edges measuring 10 centimeters, to be assembled like a Meccano machine. After initially being produced within universities as part of a training program for engineering students, these nanosatellites are beginning to attract the close attention not only of manufacturers—the US firm Planet Labs has launched hundreds of nanosatellites to map the Earth—but also of scientists. PicSat, the first satellite to be launched by the CNRS,  sent into orbit on Friday, January 121 using a launch vehicle belonging to the Indian Space Agency. Sylvestre Lacour, astrophysicist at the Lesia2 and director of the PicSat mission, discusses this groundbreaking project aimed at observing the exoplanet Beta Pictoris b.

What is the PicSat mission?
Sylvestre Lacour: The purpose of the PicSat mission is to put in orbit a 30 cm long nanosatellite to observe the passage of exoplanet Beta Pictoris b in front of its host star. This phenomenon, known as planetary transit, occurs only once every 18 or 36 years and should enable us to learn more about this extrasolar planet—direct observation of an exoplanet is in fact impossible because of the extremely low light levels involved. In practice, PicSat is made up of three CubeSats—cubes that each measure 10 centimeters along the edge—and carries a miniaturized telescope, an optical fiber and a photon counting detector: by measuring variations in the light flux from the star during the transit it will be possible to determine the exact size of the planet, calculate its density and better understand its composition.

A telescope measuring 5 centimeters in diameter (left) and optical fiber (center) have been installed in the nanosatellite. The photon detector is not visible in this image.

Why are you so interested in exoplanet Beta Pictoris b?
S. L.: Its host star, Beta Pictoris, is both extremely bright and relatively close to us, at a distance of 63 light years, making it easy to observe. Above all it is very young: while our own Sun has been in existence for 4.5 billion years, this star is a mere 23 million years old. Its planet is thus still being formed, which is the reason for our interest in its composition and the way in which it interacts with the protoplanetary disk around it. We can also see the presence of rings. All of this information will allow us to refine our models of planet formation and evolution.

What does the use of a nanosatellite mean to an astrophysics laboratory such as yours?
S. L.: A standard space mission lasts around 30 years, thus spanning almost the entire career of a single researcher, which can be a source of great frustration. Thanks to miniaturization of the on-board instrumentation, nanosatellites offer a far faster and much cheaper alternative.

But astronomy is not the only scientific field to find nanosatellites attractive. The international QB50 project launched a group of 36 CubeSats designed to study concentrations of gas in the upper atmosphere.

From funding to launch, the PicSat project will have taken three years and will cost a total of €1.5 million3 for an in-orbit lifespan of one year. This represents a tenth of the time and a hundredth of the cost of a standard space mission! Yet it will never be possible to achieve the same things with PicSat as with a large-scale mission. In astronomy, instruments require a large collecting surface to gather as many photons as possible. This lets us observe stars that are less bright, but for which we need large satellites. Our aim is rather to develop a complementary approach to standard missions by limiting the scientific aims and observing only the brightest stars.

But astronomy is not the only scientific field to find nanosatellites attractive. Environmental sciences have also taken to this technology,  which is barely 10 years old. In 2017, the international QB50 project launched a group of 36 CubeSats designed to study concentrations of gas in the upper atmosphere, and two of these devices were designed in French universities. Consequently, we are not the first French scientists to launch a nanosatellite, although we are unquestionably the first at the CNRS to do so. 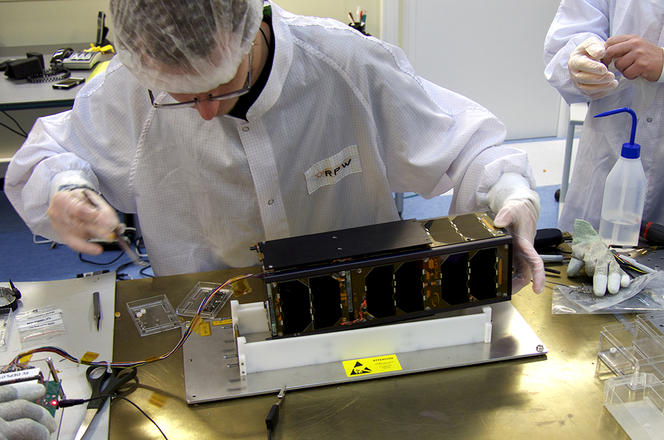 PicSat being assembled at LESIA. Nanosatellites comprise one or more modules measuring 10 cm along the sides known as CubeSats. 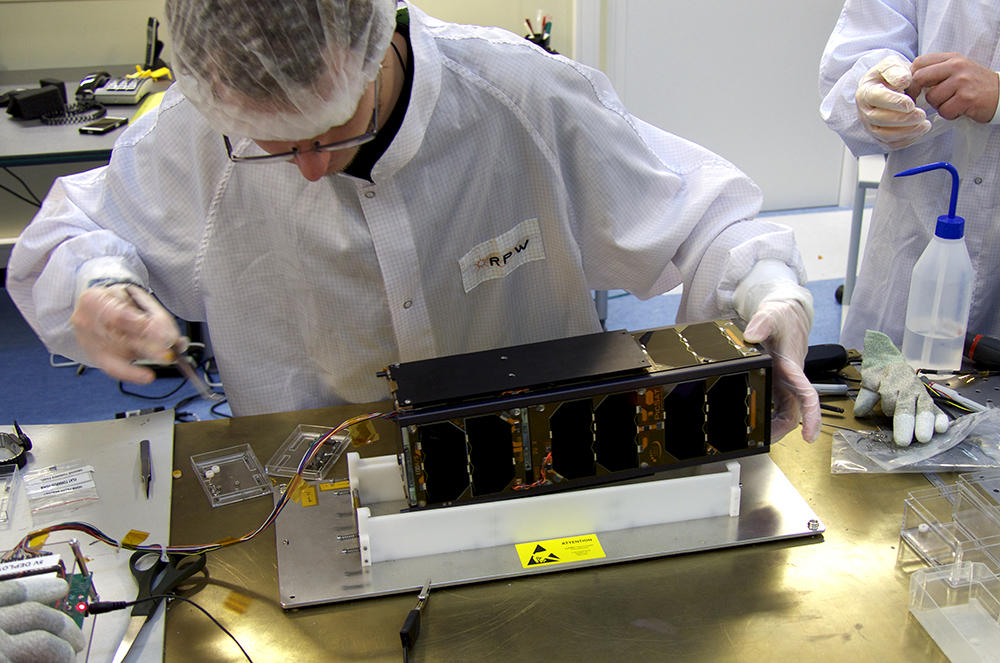 In concrete terms, how will PicSat be launched?
S. L.: PicSat will be carried aboard a Polar Satellite Launch Vehicle (PSLV) operated by the Indian Space Research Organization (ISRO). Polar satellites have a low orbit in phase with the Sun’s rotation, meaning that they are permanently illuminated and that they are subject to fewer thermal shocks that could potentially damage the equipment onboard. Preparation for the launch was extremely quick. The satellite was shipped to India in mid-December and then loaded into PSLV-C40 on December 27 for launch two weeks later. The whole process thus took one month up to blast-off from the Satish-Dhawan Space Centre near Chennai in southern India. This highly-efficient process was made possible by the CubeSat format. Any satellite comprising such modules can in fact be loaded into a standard launch vehicle and interchanged with another right up to the last minute. Several dozen other nanosatellites and a larger satellite (which covers most of the financial cost of the launch) will in fact be launched using the same rocket.

How is an exoplanet observed from a satellite orbiting the Earth?
S. L.: PicSat will be in orbit 505 kilometers above the Earth, in other words over 100 km beyond the International Space Station. At this altitude, it can observe Beta Pictoris continuously without risk of missing the transit, the date of which is known only to within a few months. On Earth, day-night alternation would be problematic, as would the fact that the star is not visible from the northern hemisphere. I would point out that a number of satellites are already dedicated to the study of exoplanets, such as the CoRoT space telescope belonging to the French Space Agency (CNES), Kepler launched by NASA, and soon, Cheops belonging to the ESA, due to be launched this year. But none of these satellites will focus on a single star. Moreover, PicSat is the very first mission to observe an exoplanet using a CubeSat. 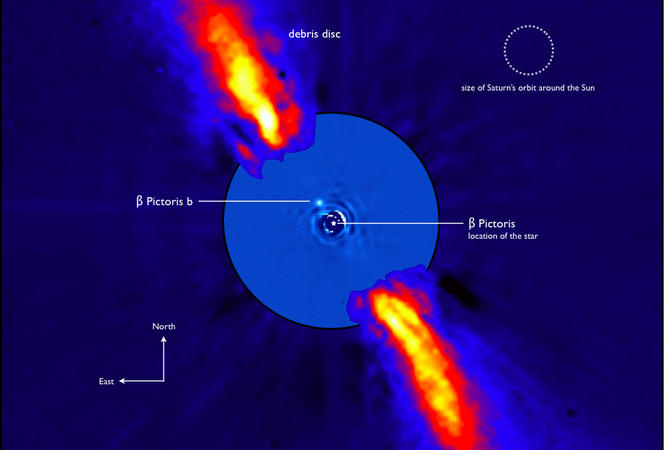 For one year, the PicSat mission will patiently await the passage of exoplanet Beta Pictoris b in front of its star, Beta Pictoris, seen here at the center of the image. 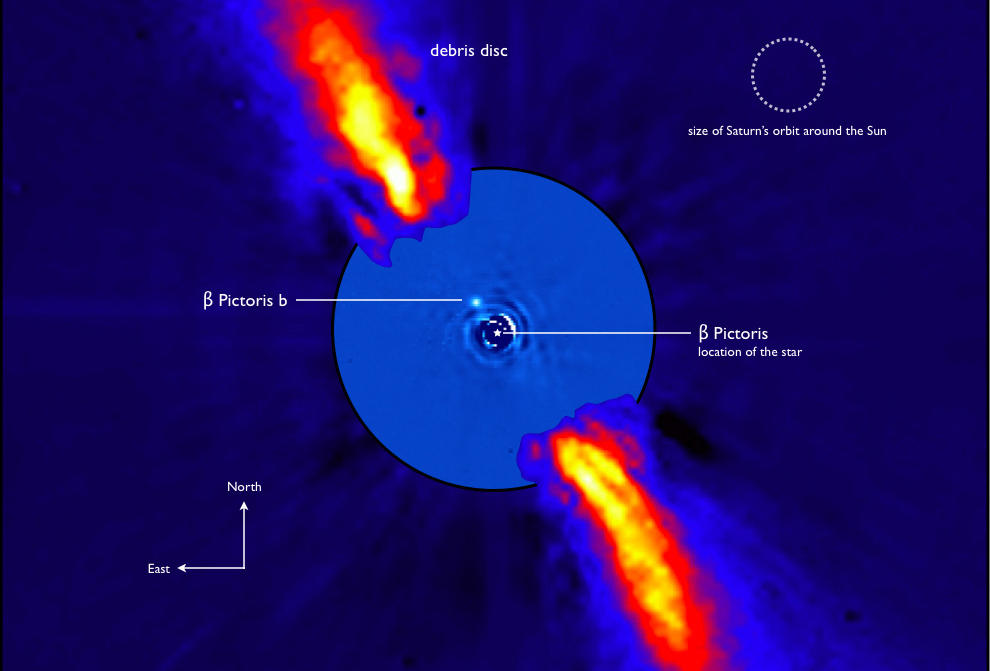 What are the mission’s main risks and difficulties?
S. L.: The planet’s Hill sphere, in other words its gravitational sphere of influence which holds all its satellites, will obviously pass in front of the star. However, we are not certain that the planet itself will in fact transit. We have been aware of this from the outset, and the CubeSat allows us to take this risk, which would be unthinkable for a program as long and costly as a standard space mission. If necessary, we have several other backup scientific projects to ensure that PicSat may still be put to full use, such as the study of exocomets orbiting around the star. Furthermore, if the planet has rings, these may transit even if the planet does not, and we will be able to observe them.

In practical terms, PicSat will be operated from the Paris Observatory in Meudon. The team will be in contact with the satellite only for several 10 minute periods, adding up to a total of half an hour per day. We are therefore working with radio amateurs across the world to maximize contact times. Radio amateurs have also let us use their communication frequencies. In return, we will broadcast the data publicly and explain to them how to receive and visualize this data. It is our wish to make PicSat a collaborative science project.