Dark Matter, Elusive as Ever

Dark Matter, Elusive as Ever

Artist's impression of the filaments and halos (in yellow) of dark matter around which formed the large structures of the Universe (galaxy, clusters, etc.).
Mark GARLICK/SCIENCE PHOTO LIBRARY/COSMOS
Share
Share
Although its existence has been suspected for more than seventy years, the hunt for dark matter continues, as physicists around the world attempt to track it down. Or are they all just chasing an illusion?

Like Luis Buñuel's film, the story could be called That Obscure Object of Desire. It is a long saga: that of a hunt conducted both underground and from the International Space Station, with the aim of revealing a mysterious, elusive substance: dark matter. Seventy years ago, a somewhat eccentric and iconoclastic Swiss astrophysicist named Fritz Zwicky wondered why certain galaxies appeared to be rotating too rapidly around a fixed point in the sky, and proposed that some kind of ghostly matter, which he dubbed “dark matter,” must be acting as a counterweight to prevent the galaxies from flying apart. At the time, the idea was met with caution.

Today, however, there is a general consensus among physicists that dark matter exists, and that it makes up 85% of all matter. In fact, it seems to be the only explanation for the cohesion of the large structures of the Universe: without it, the first stars born five hundred million years after the Big Bang would simply not have existed, and the galaxies would now be torn apart like fruit in a juicer. Remove dark matter, and all you are left with is a cold, dark, dead Universe.

The problem is that, in the labs, that “obscure object of desire” is playing hard to get. While weariness and disenchantment could have dampened the enthusiasm of physicists, the net around dark matter is closing in, and the chances of detecting it have never been so great. And should their Holy Grail elude them, this could give rise to a whole new physics.

On the trail of exotic particles

Marie-Hélène Genest, a researcher who works with data collected at the Large Hadron Collider (LHC), is also confident in the future. You might be wondering how a particle accelerator could help find a type of matter that is all around us. In fact, when physicists began to sketch out what hypothetical particles of dark matter might be like, three essential properties prevailed: they had to be neutral, massive and hardly interact with ordinary matter. This prompted the scientists to dub such particles WIMPs, for Weakly Interacting Massive Particles. At the time—the early 1980s—a new theory called supersymmetry was popular among researchers. It was supposed to complete the Standard Model, and provided a perfect candidate to play the role of WIMPs: neutralinos. From then on, the physicists at the CERN set out to track down this invisible matter, first using the Large Electron-Positron (LEP) and then the LHC colliders. 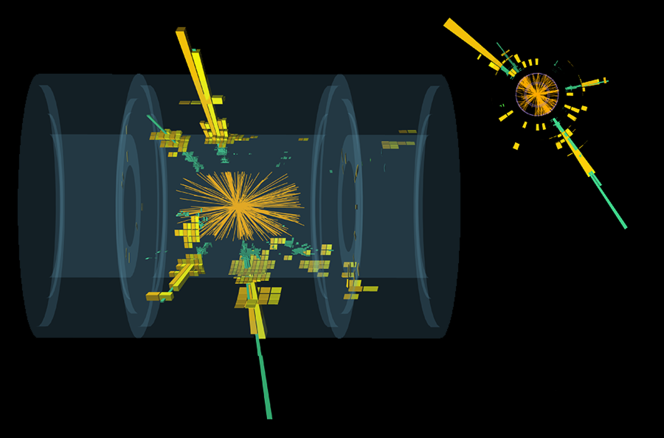 Jets of exotic particles within the Atlas detector. 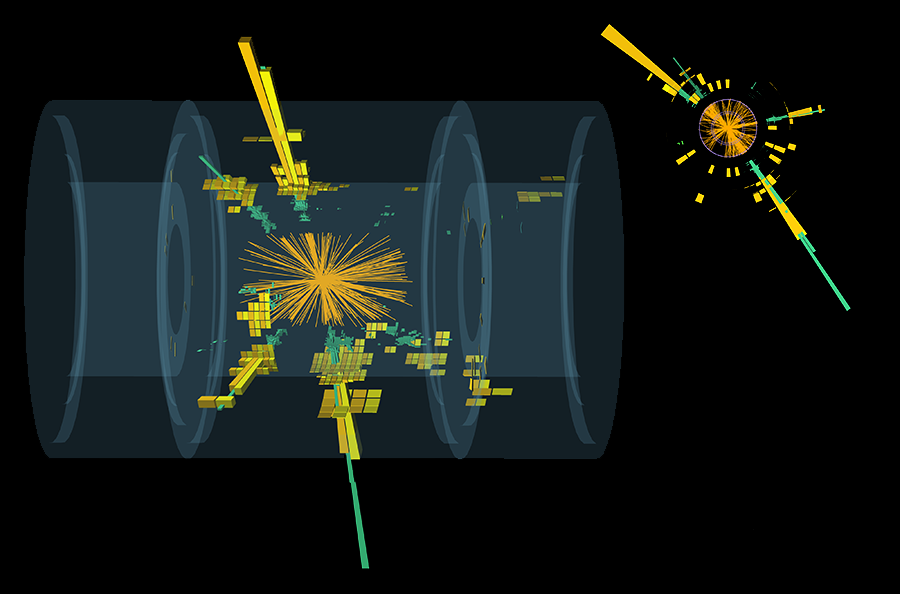 “At the LHC, we are not trying to produce neutralinos directly, but rather supersymmetric particles, such as squarks and gluinos, that decay to neutralinos,” Genest points out. “Even though the LHC has yet to have sight of any such particles (there are others than the neutralino, such as the light gravitino), that doesn’t mean that we have given up on supersymmetry. It is a theory that is mathematically elegant and that has many free parameters. Our failures lead us to believe that its signature might simply be harder to find.”

The scientist, who works at the Laboratory of Subatomic Physics and Cosmology (LPSC)1 in Grenoble, heads the exotic particle research team at the LHC Atlas detector. The reason they are called “exotic” is that, even though the LHC has closed some doors on supersymmetry, it has opened others on alternative theories according to which, for example, dark matter would interact with its surroundings via the Higgs boson. So the hunt taking place at the LHC is not restricted to WIMPs, whose profile is well known, but has been extended to a whole zoo of dark matter candidates, such as sterile neutrinos, particles that interact through a new massive Z boson, asymmetric dark matter, and so on. “In fact, we are on the lookout for any reaction exhibiting an energy deficit that would point to the invisible action of dark matter,” Genest says. “We are more pragmatic now than when we were just tracking down supersymmetry.”

Deep inside the mountain

Researcher Davide Franco, from the APC laboratory,2 is just as determined. Getting to his workplace means having to drive into the Gran Sasso tunnel, in the heart of the central Italian mountains, and then leaving the motorway via an access road that leads into a gigantic hall. The site hosts the world's largest underground laboratory, together with DarkSide, a programme designed to directly detect the flux of dark matter particles that is thought to be constantly flowing through us. Like a whole series of similar detectors (LZ in the United States, PandaX in China and Xenon1T also at Gran Sasso), DarkSide uses a target made up of a liquefied noble gas (argon or xenon). If a WIMP strikes the nucleus of one of the argon or xenon atoms, this should cause the emission of a flash of light. The 1400 metres of overlying rock, which particles of dark matter should be able to travel through unhindered since they do not interact with ordinary matter, nonetheless protects the detector from cosmic ray interference. 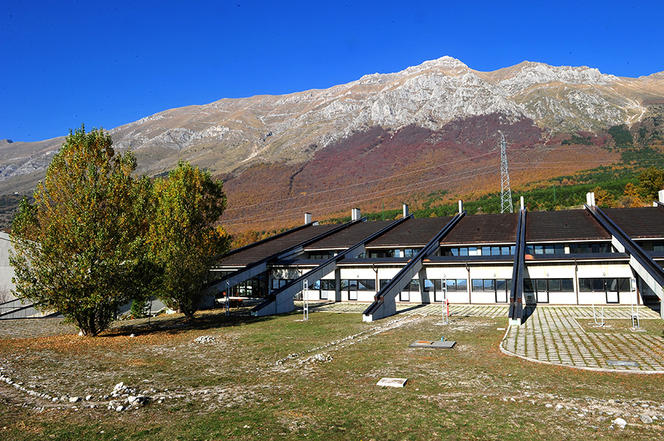 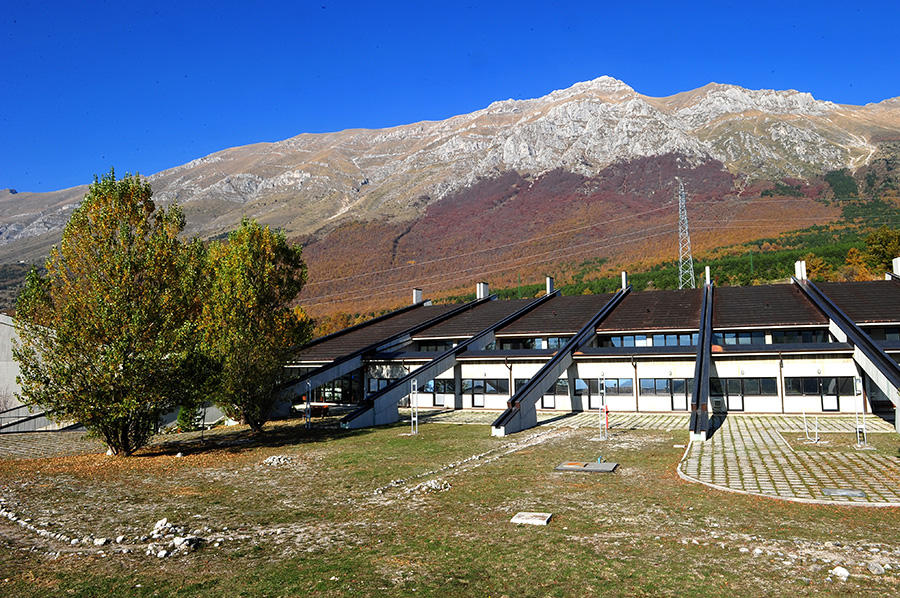 DarkSide began operation in 2007 and now uses a tank containing 50 kg of argon. Franco is upbeat about future upgrades to the detector: “In 2021, the capacity of the tank will be increased to 20 tons! This will hugely improve its sensitivity to particles with masses from around ten GeV up to one TeV, which are especially accessible to liquefied noble gas detectors. If the mass of WIMPs falls within this range, as initially predicted by supersymmetry, DarkSide will necessarily detect them.”

However, if the mass of ghostly particles lies towards the bottom of this energy range,  the large xenon detectors and the future upgraded version of DarkSide might just be pipped to the post by the smaller Edelweiss experiment, housed deep in the Alps under the Fréjus tunnel. Edelweiss, which also detects collisions with particles of dark matter, uses cryogenic bolometers small enough to hold in the hand and which contain crystalline germanium cooled to a temperature of 20 millikelvins.

“At Edelweiss, rather than focusing on sensitivity we are attempting to detect particles with low masses,” explains Julien Billard from the IPNL.3 “We cannot compete with the sensitivity of the large detectors. However, they will find it difficult, or indeed impossible, to detect particles with masses of less than 1 GeV. The principle on which they are based makes them blind to low-mass particles, whereas at such values—from a few GeV to around a hundred MeV—our detector’s eyes are wide open.”

Whether or not the mass of dark matter particles holds the key to their detection, there remains a frightening question: what if all this effort has been in vain, and there is actually nothing to detect? Billard has no problem admitting this possibility: “We are currently at a stage where we are questioning everything we thought we knew. It’s both scary and exciting. For instance, dark matter may not interact directly with our world.  There are theories that seriously consider the possibility of dark matter being confined to dimensions parallel to ours."

However, few experimental physicists are willing to go along with the idea of undetectable dark matter. “It took forty years to detect gravitational waves,” points out Laurent Derome from the LPSC in Grenoble. “We should be humble in the face of Nature.” The researcher is tracking down dark matter at an altitude of 300 kilometres using the Alpha Magnetic Spectrometer (AMS) detector, a seven-ton behemoth mounted on the side of the International Space Station. The device is sensitive to various kinds of particles (including positrons and antiprotons) that would result from the mutual annihilation of two dark matter particles. Since it was placed in orbit in 2011, the AMS has already detected excess positrons and antiprotons in the cosmic ray flux, but at values too low to be unambiguously attributable to the effects of dark matter (in particular, pulsars could explain the positron anomaly).

But for one moment, let’s imagine that, despite all the means deployed, the physicists’ search for dark matter proves fruitless. What else could explain the gravitational effects observed, whose existence is not in doubt? At one point, some thought that the MOND4 theory was a possible way out. It postulates that, over long distances, gravity does not behave as predicted by Newton’s laws and that at large scales it could act as a kind of cosmic glue, preventing galaxies from flying apart. 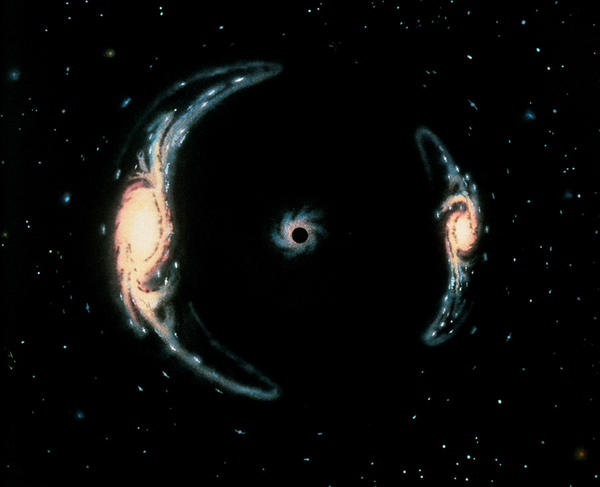 Artist's impression of the gravitational lens effect exerted by a black hole (center) on a galaxy located in its background. 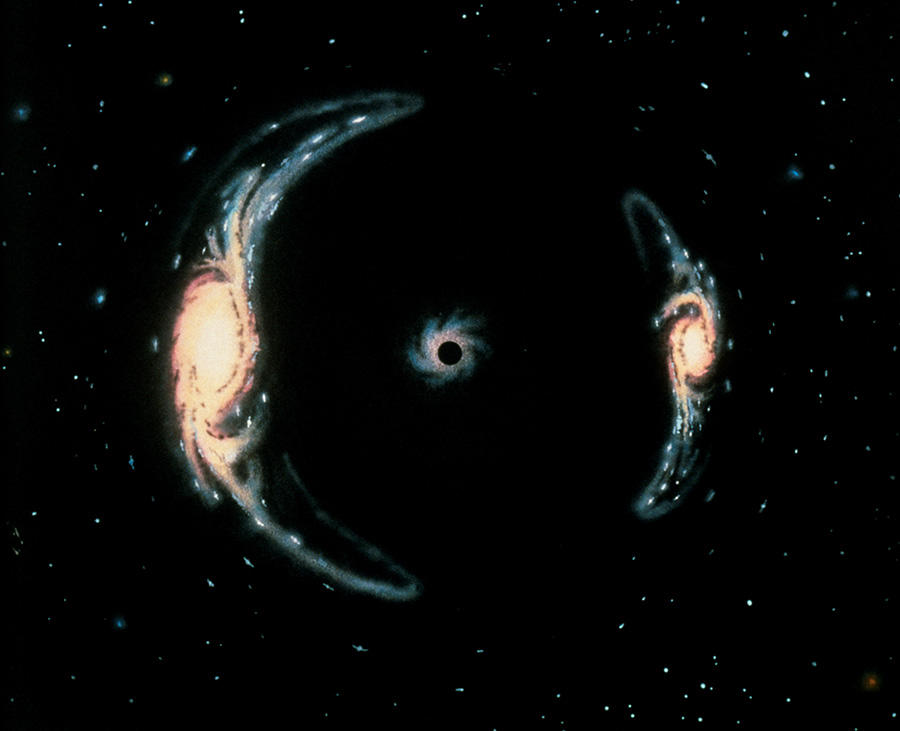 At the CPPM,5 Stéphanie Escoffier does not quite agree. “The theory as formulated in 1983 has been rejected due to the gravitational lens effect (the fact that halos of dark matter are necessary to explain why certain light trajectories in space are bent), because these observations require the presence of a mass along the line of sight. As a result, only a few extensions of MOND remain today.”

A specialist in dark energy, the other great unkown in physics, Escoffier studies cosmic voids, vast empty spaces surrounding the filaments along which the galaxies lie. Voids are astrophysical objects in their own right. “They can be used to test models of the Universe at a given time,” she explains. “For example, they have confirmed that dark matter already largely dominated matter at the time of recombination—when electrons combined with protons to form atoms, making the Universe transparent to light—380,000 years after the Big Bang.” Something that MOND is unable to explain.

With MOND out of the way, what could a Universe without dark matter look like? Should the Copernican principle (the assumption that the human species does not live in a special place in the Universe) be called into question? Is it possible that space is not identical at all scales? Or could it even be that large quantities of antimatter hidden elsewhere in the Universe create antigravity, as some theories postulate? Yet another alternative could be that spacetime is not simply curved, but also twisted on itself, rather like a Möbius strip. In any case, such solutions remain highly speculative and, above all, difficult to test experimentally. 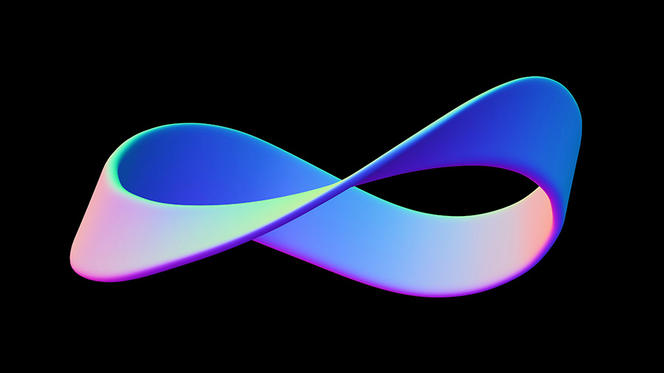 Computer artwork of a Mobius strip: a continuous closed surface with only one side. 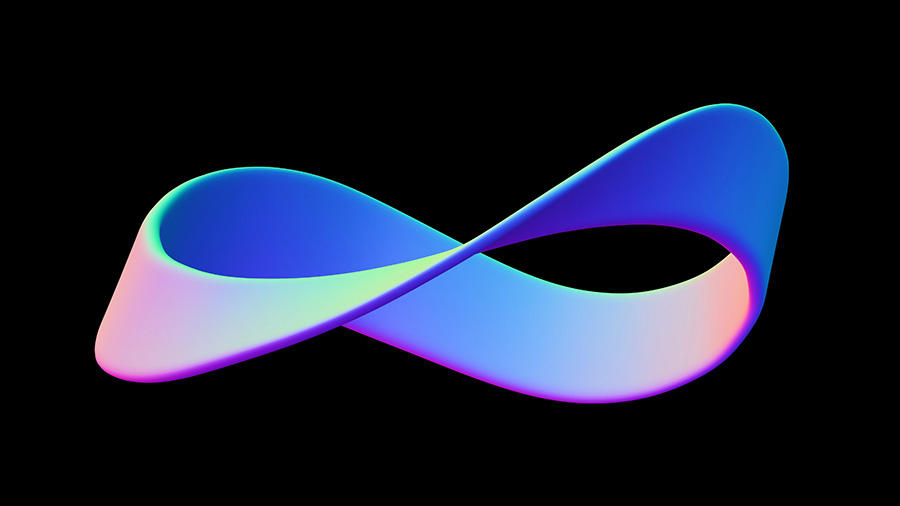 But who knows? Nature sometimes has surprises in store. A team from Yale University recently announced that they had detected strange radio signals emitted at the time when the first stars formed. This suggests that the key role played by dark matter in facilitating the birth of these stars was greater than previously thought.

Billard finds this idea exciting: “If these findings are confirmed, it would mean that dark matter interacts with ordinary matter more than we imagined. And also that we've been wasting our time all these years. Instead of trying to detect dark matter underground, we should be looking for it at the surface!” Stowed away in a corner of his laboratory, some of the scientist’s bolometers are ready to leap into action. Buñuel’s film was all about passionate desire, a never-ending story in the famous Spanish director’s view. It turns out that physics and love might have a lot in common.

With a PhD in physics, Xavier Müller is a science journalist. Since 2008, he has also published several novels.

Video
Formation of the Universe: the Big Computation