Physarum polycephalum (about 10 centimeters in diameter), or blob, composed of a single cell, cultured in laboratory on an agar gel.
Audrey DUSSUTOUR
Share
Share
Following up on earlier revelation that blobs of slime mold possess previously unsuspected learning capacities, researchers have shown that blobs also share what they learn with one another.

If “blob” or “slime mold” fits your idea of a nasty insult, you may well want to rethink that. French biologists from the CRCA1 focusing their research on Physarum polycephalum—more commonly referred to by one of the aforementioned terms—have uncovered evidence that this organism is far savvier than most people give it credit for. Already in April 2016, the team demonstrated slime mold’s ability to learn whether a substance is harmful or not despite having no brain or nervous system—which were considered prerequisites for absorbing information.2 The biologists have now gone one critical step further by demonstrating that not only can blobs learn, they can also transfer their acquired knowledge to non-initiated blobs by cell fusion.3

Physarum polycephalum is a yellowish slime mold that grows in cool, damp areas such as forest undergrowth. Non-photosynthetic, it feeds on bacteria, fungi and decaying organic matter, and creeps at a maximum speed of 4 centimeters per hour. Neither an animal, a plant, nor a fungus, it falls into the wide taxonomic group of Amoebozoa: organisms composed of one cell, which can either exist autonomously or fuse with other cells of the same species into colonies, namely to pool their food-foraging capacities. These primitive life forms were once thought to be unequipped for learning—until the Toulouse-based CRCA scientists proved otherwise.

About Share
About
Close
Année de production:
2016
Naive blobs that had fused with habituated ones for three hours proved to retain the message.

In the team’s initial set of experiments, three groups of Physarum polycephalum specimens were forced, over a nine-day period, to cross agar gel bridges—treated respectively with quinine, caffeine, or nothing—in order to access food. With the bitterness of quinine and caffeine being unpalatable to slime mold but not endangering it in any way, the first two groups began by shying away from their respective bridges. However, by the end of the sixth day, they overcame their misgivings and crossed over to the food at the same speed as the control group. Overcoming a  harmless but repellent substance after multiple exposures to it is none other than a basic form of learning known as ‘habituation,’ not previously detected in Amoebozoa. “We were astonished to find out that the slime mold could learn without a brain or nervous system!” recalls Audrey Dussutour of the CRCA. Results that seem to show that learning is a far more ancient phenomenon than previously thought, given its presence in such primitive organisms.

In another set of experiments, the team has now taken their study to a new stage by investigating interactions between Physarum polycephalum individuals exposed to different conditions. Using the same bridge strategy, the researchers began by habituating 2000 blobs—this time to salt—while a second group of 2000 blobs remained ‘naive’ about the repellent. Next, the biologists formed mixed pairs of habituated and naïve slime molds, and by bringing them into contact, triggered their fusion—a natural reflex for these “organisms which in nature tend to be split up by falling objects or climatic conditions for example, and which are thus accustomed to reforming whenever possible,” explains the CRCA researcher. “When two membranes touch,” she continues, “they open up to one another if the species recognizes that it has met its genetic match.” 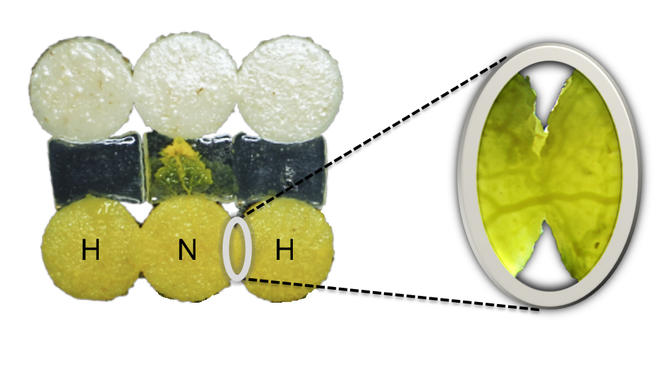 'Habituated Physarum polycephalum (H) merging with a 'naive' congener (N). The pseudopod that crosses the bridge comes from the 'naive' blob. In the contact area (zoom) one can see the formation of a vein between the blobs. 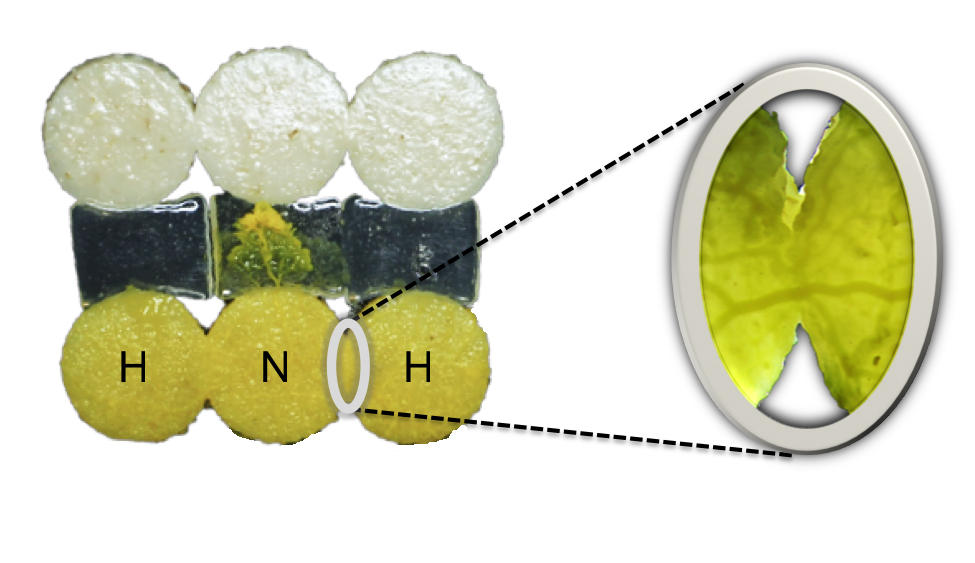 'Habituated Physarum polycephalum (H) merging with a 'naive' congener (N). The pseudopod that crosses the bridge comes from the 'naive' blob. In the contact area (zoom) one can see the formation of a vein between the blobs.
David VOGEL
David VOGEL
Share
Share

What the biologists discovered was that the fused mixed pairs crossed salty bridges just as fast as habituated blobs—an indication that the duo had shared the crucial information on salt’s non-toxicity. “It was already well-established that cell fusion enables cells to share resources such as mitochondria,” notes Dussutour. “Our results showed that fusion also allows the sharing of information.” Beyond pairs, the same result was also achieved by mixed groups that included up to four naive blobs and just one habituated individual. Remarkably, “naive blobs could attain the same level of learning without the information being diluted, no matter what physical position the habituated blob occupied in the chain, on a side or in the center.” Indeed, “most of the time, the fused entity’s pseudopod  extended from a naive blob.”

To check that unhabituated slime molds had well and truly assimilated the tip passed on by their habituated partners, the biologists then repeated the experiment after separating the blobs from one another. Naive blobs that had fused with habituated ones for three hours proved to retain the message, but those that had fused for shorter periods regressed to their previous wariness of salt. Microscopic analysis indicated that a vein—taking a significant three hours to form—linked habituated and naive blobs at their fusion point: this is undoubtedly the vital vessel through which information transits from one individual to the other. Cracking “the cellular and molecular mechanisms behind this flow of information,” in collaboration with neuroscientists, is amongst the team’s future projects.

Dussutour describes their next step as probing “whether a pair of blobs, each habituated to a different substance—one quinine, the other salt, for example—can swap their knowledge through fusion and retain both pieces of information.” She also envisages testing whether “Physarum polycephalum—which is more or less immortal as it can be resuscitated by wetting when it dries up—is capable of remembering information learned prior to a drying process.”

Article
The blob creeps into the homes of the French
Mold