Home / Articles / At the Heart of Nuclear Matter with SPIRAL2

At the Heart of Nuclear Matter with SPIRAL2

Home / Articles / At the Heart of Nuclear Matter with SPIRAL2

At the Heart of Nuclear Matter with SPIRAL2

View of part of the high energy transmission line of Spiral2 which makes it possible to focus the ion beams inside the tubes kept under high vacuum.
P. STROPPA/CEA/CNRS
Share
Share
A new heavy-ion accelerator was inaugurated a year ago at the GANIL facility in Caen (northwestern France). The first phase in the SPIRAL2 project, this new instrument will enable scientists to delve further into the mysteries of the atom and even create new elements.

In days of old, alchemists pursued a goal long believed illusory, that of transmuting a base metal into another—preferably noble. At facilities like the French Large Heavy-ion Accelerator (GANIL) in Caen, the alchemists' dream has become scientific reality. For the last 35 years, GANIL's physicists have been smashing accelerated ions in order to produce new atoms and find the secrets of matter on atomic scales. Once the facilities of GANIL's SPIRAL2 project (2nd generation Production System of Online Accelerated Radioactive Ions) are up and running, scientists will be able to perform transmutation on an unprecedented scale, opening the way to the discovery of as yet unknown elements and atomic structures.

One of the world's largest ion accelerators

GANIL was jointly set up in 1976 by the French Alternative Energies and Atomic Energy Commission (CEA) and the CNRS National Institute of Nuclear and Particle Physics (IN2P3).1 In the years that followed, the facility continued to expand, establishing international collaborations and acquiring new equipment. This constant evolution, in which SPIRAL2 is a milestone, made it one of the world's four leading laboratories in the field of ion beam research. Its operating principle has nonetheless remained the same:  the production of electrically charged ions by stripping electrons from neutral atoms. When they enter the accelerator's magnetic fields, the nuclei of these atoms near a third of the speed of light before smashing into the atomic nuclei in the target.

These extremely high-energy collisions result in nuclear reactions that give rise to new nuclei with unusual neutron-proton ratios, structures or shapes. Observing and analyzing these short-lived radioactive nuclei helps scientists to gain a better grasp of the properties of nuclear matter. Thanks to the work of its 250 permanent staff (physicists, engineers, technicians, administrative staff, etc) and with the contribution of 700 visiting researchers from across the world, GANIL has witnessed a host of discoveries about the structure of atomic nuclei, their thermal and mechanical properties, and their decay modes. 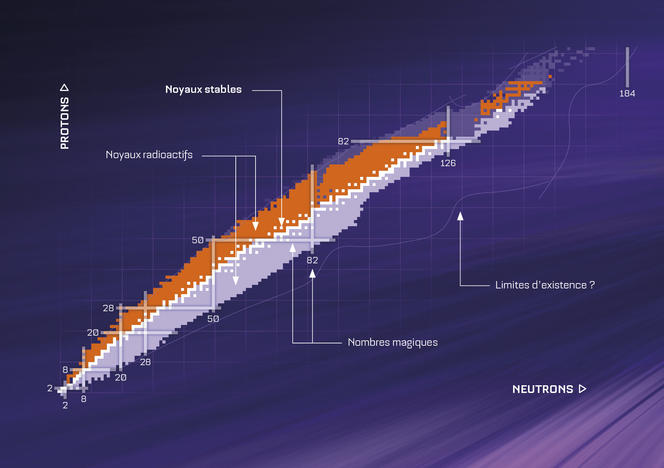 The chart of nuclides. Each square represents a nucleus positioned according to its number of neutrons (on the horizontal x-axis) and protons (on the vertical y-axis). The white squares correspond to the 291 nuclei found in the natural state on Earth, while the orange and light grey areas show the 2 800 nuclei synthesized so far in the laboratory. Beyond feature the nuclei predicted by theory to exist in the Universe. 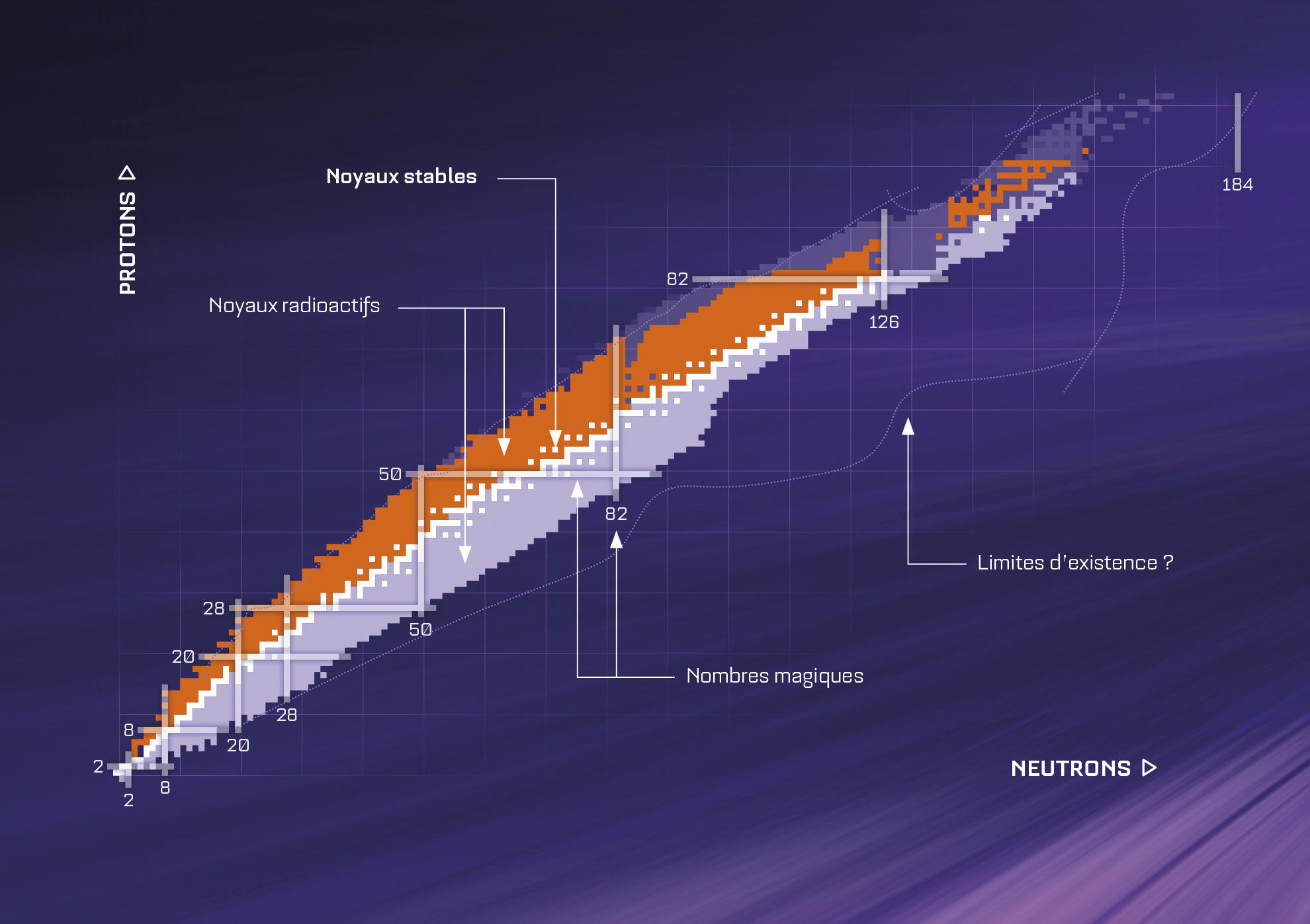 The chart of nuclides. Each square represents a nucleus positioned according to its number of neutrons (on the horizontal x-axis) and protons (on the vertical y-axis). The white squares correspond to the 291 nuclei found in the natural state on Earth, while the orange and light grey areas show the 2 800 nuclei synthesized so far in the laboratory. Beyond feature the nuclei predicted by theory to exist in the Universe.
UNIK STUDIO
UNIK STUDIO
Share
Share

The search for exotic nuclei

The laboratory is at the cutting edge of research into exotic nuclei, so-called because they are not among the 291 stable isotopes found in the natural state on Earth. Over a hundred such nuclei have already been discovered, synthesized and studied. Once SPIRAL2 begins operation, it will become possible to produce and study new exotic nuclei at GANIL, enabling the facility to compete in the global race to produce super-heavy nuclei (nuclei with an atomic number, in other words number of protons, exceeding 110). For instance, GANIL will be able to produce new elements surpassing Oganesson (Og) the heaviest to date with 118 protons, and whose synthesis by a Russian laboratory was verified in December 2015.

Buried nine meters underground, the various instruments making up the first phase of SPIRAL2 will begin operation progressively. They will not replace but rather extend GANIL's existing facilities, whose area will increase from 11,000 m² to around 20,000 m². The project was divided into several phases so as to take budgetary constraints and safety clearance procedures into account.

The heavy ion beams produced will be ten to a hundred times more powerful.

On November 3rd, 2016, the first phase, which is set to continue until 2019, will be marked by the inauguration of the brand new linear accelerator LINAC, and the two ion sources and injector that will feed into it.
The first source will produce beams of heavy ions from elements ranging from carbon to uranium. "The heavy ion beams produced by this source will be ten to a hundred times more powerful than those currently available at GANIL," explains Jean-Charles Thomas, a CNRS researcher at the site. "The beams will be used mainly to produce (exotic) radioactive nuclei by fusion reactions."

The second source will produce beams of lighter particles: protons, deuterons (nuclei made up of a proton and a neutron) and alpha particles (helium-4 nuclei, comprising two protons and two neutrons).  "Beams of lightweight particles such as these are not currently available at GANIL," Thomas points out. "They will be used principally to generate powerful beams of neutrons." The beams of heavy ions or lightweight particles will then enter the radio-frequency quadrupole (RFQ), whose role is to accelerate the ions up to 4% of light speed, while separating them into packets suitable for injection into the accelerator. 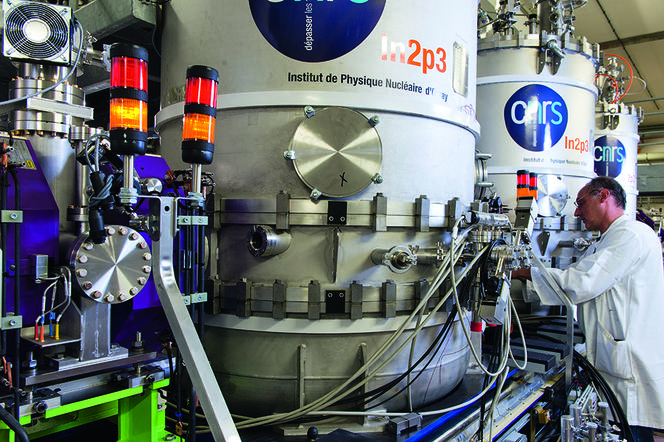 The new LINAC accelerator comprises 19 cryomodules, each containing one or two acceleration cavities. 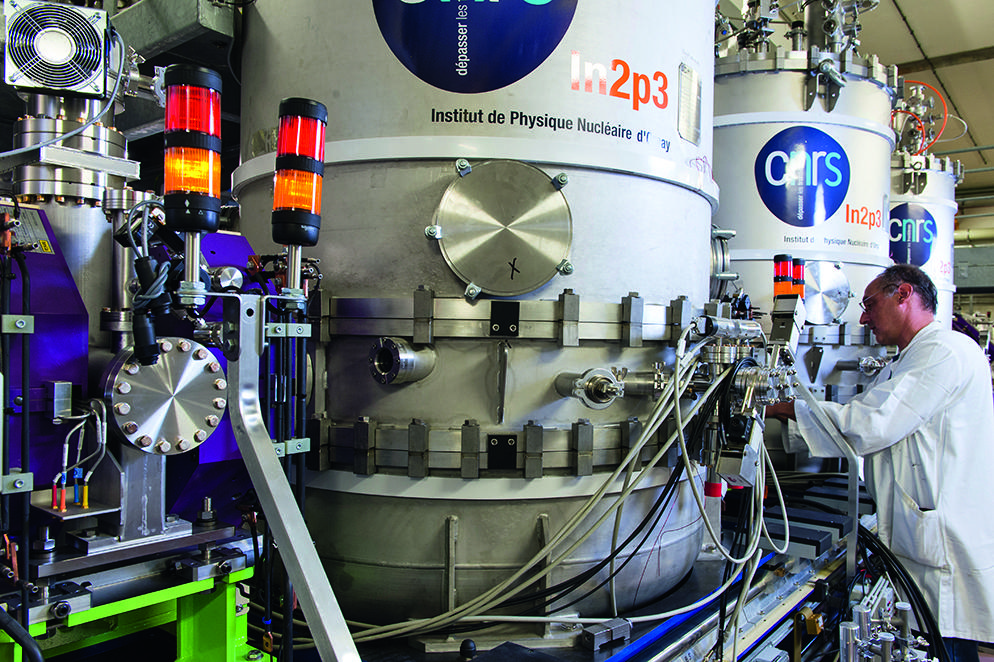 From pure research to social applications

At the heart of the SPIRAL2 facilities, the LINAC linear accelerator is made up of a sequence of 19 cryomodules containing superconducting cavities that operate at 4.5 K (-270 °C). The whole assembly will accelerate the particles to energies of up to 25% of the speed of light, while heavy ions will reach 18% of light speed. Depending on their nature, the high-energy beams will be sent to two new experimental areas, NFS (Neutrons For Science) and S3 (Super Separator Spectrometer), which are due to begin operation shortly.

SPIRAL2 will let us elucidate the structure and behavior of atomic nuclei produced under extreme conditions.

NFS, which will get underway in 2017, will be used to study the reactions brought about by fast neutrons in next-generation nuclear reactors, as well as the effects of neutron irradiation in the fields of healthcare and materials. The S3 area, due to become operational in 2019, will use beams of heavy ions to generate and study the exotic nuclei produced in nuclear fusion reactions.

"In fundamental terms, SPIRAL2 let us elucidate the structure and behavior of atomic nuclei produced under extreme conditions," says Julien Piot, a CNRS physicist involved with S3 at GANIL."It should also confirm the existence of certain 'magic numbers' of protons/neutrons, as well as that of a possible island of stability for super-heavy nuclei."

However, SPIRAL2 will also have applications including the treatment of radioactive waste, the production of isotopes for nuclear medicine, and the study of the impact of neutrons on materials and living organisms.

Article
Is ventilation the ultimate weapon against Covid-19?
Atom

Video
The New Masters of Time