Image of the monumental epicenter of Naachtun.
Projet Naachtun/A. Dorison
Share
Share
The results from a major campaign of lidar mapping in Guatemala caused a sensation early this year, revealing the remains of 60,000 Maya ruins, most of them totally unknown and buried beneath the dense tropical forest. Seven international teams used this incredible trove of information that dramatically changes our understanding and perception of the ancient Maya. Philippe Nondédéo, Naachtun Project leader and co-author of the study, answers our questions about the newly-published study.

With the discovery of 60,000 archeological structures, the publication of the first LiDAR1 results made a splash in January. How did this campaign unfold?
Philippe Nondédéo:2 Since 2010, I have been working with my colleague Cyril Castanet from the LGP3 in the site of Naachtun, deeply settled within the Maya Biosphere Reserve in northern Guatemala. Like a number of other sites in the area, the Naachtun Project is partly financed4 by the Pacunam Foundation (Patrimonio Cultural y Natural Maya). Two years ago, this private organization launched a major lidar cover program on ten sites within the biosphere, covering a total of 2100 km². Nine archeological sites were included, along with two test areas with no known remains, and entirely covered by vegetation.
When this research was initially revealed last February, the reality was often incorrectly reported: we were not talking about a single huge site, but rather a series of different sites. The 60,000 archeological structures listed are distributed across discontinuous areas that are sometimes dozens of kilometers apart.

Can you tell us about the new results that were just published in Science5 on these Mayan structures?
P. N.: Archeological excavations in Maya areas often focus on city epicenters, the economic and political core of cities where pyramids and important political monuments can be found. Yet that would be like studying the very central parts of major French cities without considering the suburbs or the neighboring countryside. The perspective and vast territory covered by lidar survey offers a very different vision of the Maya civilization.
While traditional models stipulated that the population was concentrated in these epicenters and adjoining residential areas, we actually observe a strong population density within the distant periphery, in areas considered until now as rural ones. We thought these areas were dedicated to agriculture, but in reality we now know that they were highly populated. With so many people settled everywhere, this finding raises the question of how the Mayas managed to support their population with food and water.
While jungle covers this entire sector today, this study emphasizes that the Maya area was a strongly anthropized environment during the Classic period with vast systems of agrarian terraces on the hills, and a complex network of channels and small agricultural fields in wetlands areas susceptible to flooding. The terraces retained humidity and sediments from erosion, while depending on the season canals drained or irrigated the heart of the partly cultivated wetlands areas. This demonstrates the Mayas’ impressive capacity to adapt to the hostile environment of tropical forest, and shows their high degree of control in the management of available resources. 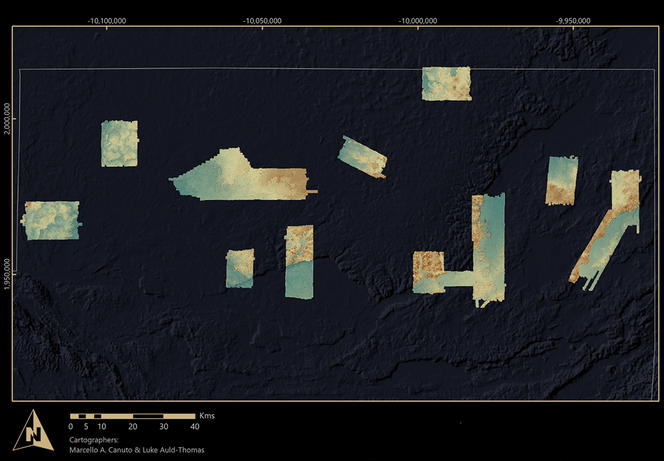 Map of all of northern Peten, Guatemala, showing 11 areas covered by LiDAR imagery. 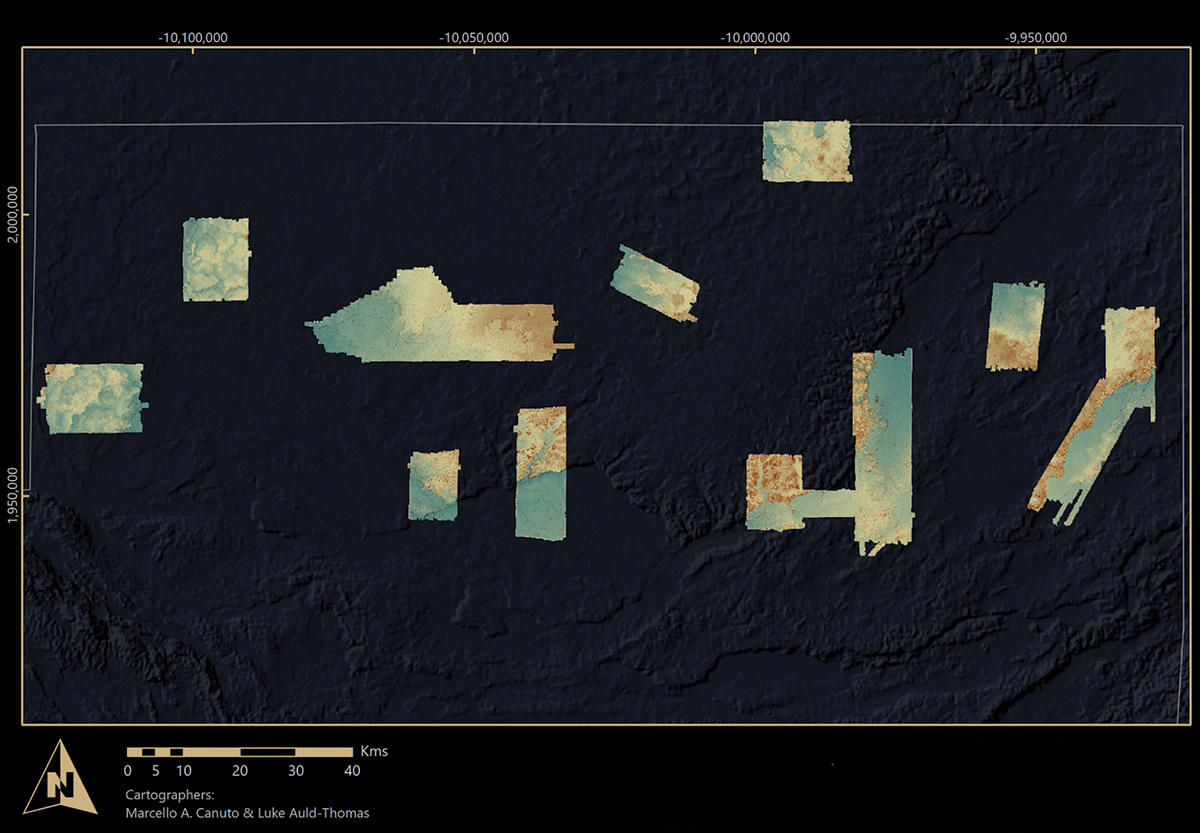 What does this research reveal about the political organization of the Maya?
P. N.: The lidar images revealed a surprising connectivity between cities, with a network of raised causeways extending across dozens of kilometers. Yet we didn’t notice anything while in the field, it was features completely unknown to us. Even today, when we know the exact location of these causeways, seeing them in the field is very difficult in a tropical forest environment, and we have to clear an entire sector in order to start getting a clear picture. We wouldn’t have seen any of these features without the help of the lidar, even though for Naachtun alone, the network totalizes approximately 50 kilometers of causeways and pathways. We observed that vassal cities could be, by these causeways, directly connected to their suzerain capital, such as Naachtun. The deciphering of Maya inscriptions during the 1990s had already provided information regarding their political system, with numerous steles commemorating conquests, wars, and marriage alliances. The most powerful kings married their daughters and sisters to their vassals, thereby establishing complex networks through blood ties. The causeways network to a certain extent offers a concrete materialization of these hierarchical relations.
The images also showed that certain sites were equipped with defensive works including low walls, palisades, moats…These systems especially involved settlements occupied from the Preclassic period (600 BCE to 150 CE), and are not so present at Classic period sites (150 to 950 CE), such as Naachtun.

LiDAR has once again proved its usefulness in archeology. How has it become part of the discipline?
P. N.: To give a rough estimate, only 5 to 10 % of the 60,000 structures revealed were already known. In Naachtun we went from 900 listed structures to nearly 12,000. In a fairly dense tropical jungle cover, we focus our studies on city's centers. Working and traveling in the jungle is too difficult and time-consuming to explore the distant peripheries with the same intensity as the monumental epicenter. As a result, they do not receive as much attention.
Lidar was perfected in the 1980s, and was added to the archeologist’s toolbox in the 2000s. It also won renown beginning in 2005 on another Maya site, the site of Caracol in Belize, where the method revealed a fairly elaborated land use, with numerous systems of agrarian terraces. While still costly, the gradual fall in the price of lidar has currently enabled a better diffusion of this technique among archeological projects all over the world. 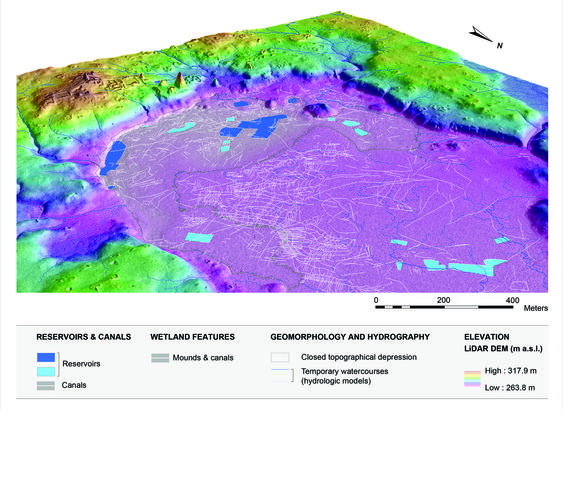 Hydraulic developments of marshes for intensive agriculture near the center of Naachtun. The white network corresponds to a system of channels that connected cultivated fields whereas the blue areas show water reservoirs. 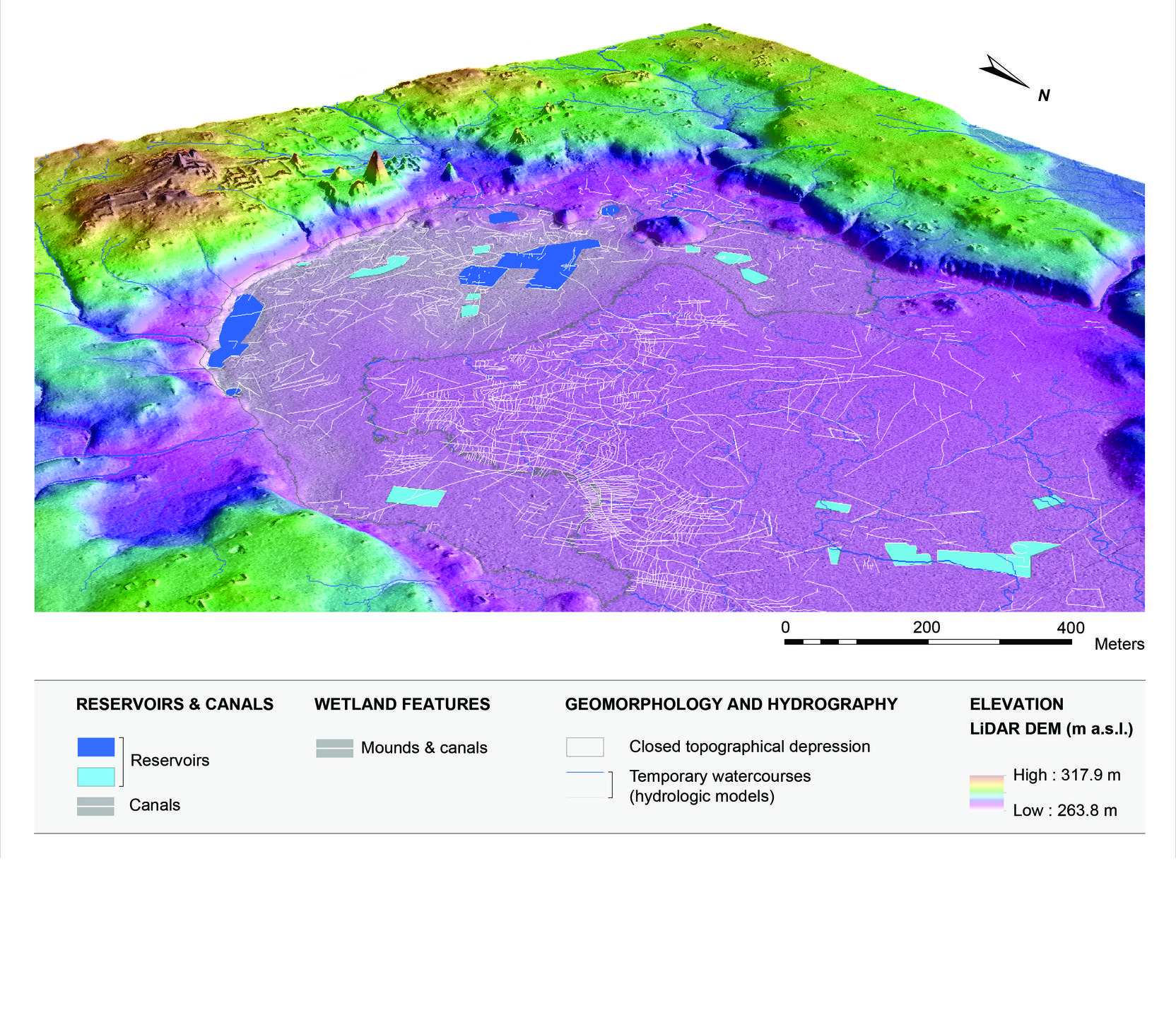 What are the next steps in this research?
P. N.: We plan to go back to the field in 2020 for a four-years-project, mainly for excavations and “ground-truthing.” We will then be able to respond to the new questions the Lidar dataset raised. We are taking greater interest in the management of water and local resources by the ancient Mayas. Future research will most probably allow us to test thoroughly and even shatter certain theories regarding the collapse of Classic Maya civilization, the Mayan people have sometimes been accused of over-exploiting their environment. The dataset of course reveals that the Maya had a firm grip over their environment, but it also suggests prudent and able management. For Naachtun alone, we identified over 18,000 agricultural terraces, approximately 5,400 canals, and over 70 large reservoirs of water (drinking and farming).

Within the Naachtun project, we are developing a multidisciplinary approach, with archeologists being joined very early on by researchers working on the reconstruction of paleoenvironments and society environment interactions: geographers, geoarcheologists, sedimentologists, archeobotanists… A number of CNRS laboratories (Archam, LGP, CEPAM6) are involved in an effort to understand how the city developed, and how the landscapes evolved in accordance with human intervention and fluctuating climatic conditions. This multidisciplinary research was also applied to lidar imagery of the Naachtun territory through two complementary approaches conducted simultaneously: archeologists recorded all material traces (buildings, mounds, quarries, causeways…), while environmentalists identified land modifications such as reservoirs, dams, canals, moats, raised fields…