A Prestigious Award for Claude Lorius

A Prestigious Award for Claude Lorius

This week, you will be with Claude Lorius as he receives the Bower Award for Achievement in Science & Prize from the Franklin Institute in the United States for his pioneering work on climate change. This award is the latest addition to an already impressive list.
Jerôme Chappellaz: Yes, Claude Lorius has already received many awards and recognitions. In France, he was presented with the CNRS Gold Medal in 2002, together with Jean Jouzel, his long-standing scientific partner. On the international stage, he has received the Tyler Prize for Environmental Achievement, the Blue Planet Prize, the Balzan Prize, and numerous others. But this new award is especially welcome on account of the impressive list of prestigious scientific laureates over the last 200 years (Tesla, Einstein, Marie Curie, among others), but also in view of the climate change scepticism being expressed at the highest levels of the American administration... Claude will be donning his tuxedo once more for the occasion, just as he did at the Cannes film festival in 2015, during the showing of Luc Jacquet’s film La Glace et le Ciel (“Ice and Sky”), which was entirely devoted to his life in science. I have no doubt that he will be overcome by emotion once more.

Above all, these prizes are an opportunity to showcase the underlying processes of research, like the one Claude has experienced with his own team: a long process of intellectual blind man’s buff requiring great patience, intuition, risk-taking, and very close bonds with an ingenious team, in the hope of being successful after several decades of effort. It is also an opportunity to talk about the Anthropocene, this new geological era in which humans are leaving their irremediable footprint on our planet’s environment, and where we cannot sit idly by. Claude has been waging this battle for decades.

Where would current research on climate change be without the efforts of Claude Lorius and his collaborators?
J.C.: The science of ice cores, which Claude launched in France, has greatly contributed to our understanding of the mechanisms that regulate the Earth’s climate under natural conditions, while also throwing into sharp relief the impact of human activities. Shortly after glaciologist Willi Dansgaard’s studies in the 1950s of snowfall in Greenland, Claude showed— using samples collected in 1959 during a US Antarctic expedition—that the relationship between heavy and light hydrogen isotopes that make up water molecules in snow was closely dependent on the temperature at which the snow in question actually fell. The notion of the "isotopic thermometer" was born. This fundamental tool is still used today to analyze past changes in climate using ice cores. 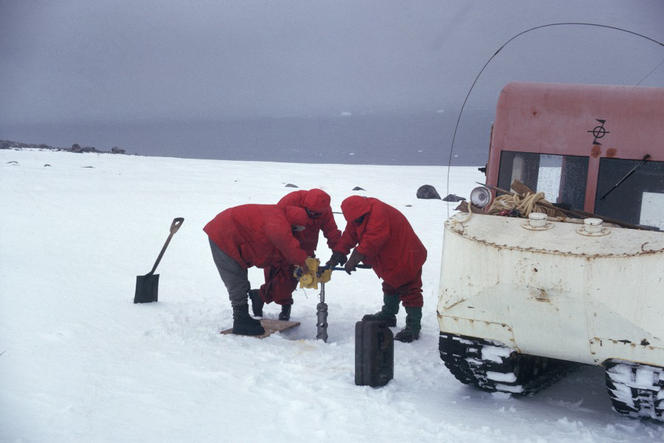 Light drilling operation near the coast in Adélie Land, home to the Dumont-d'Urville station (1964-1965). 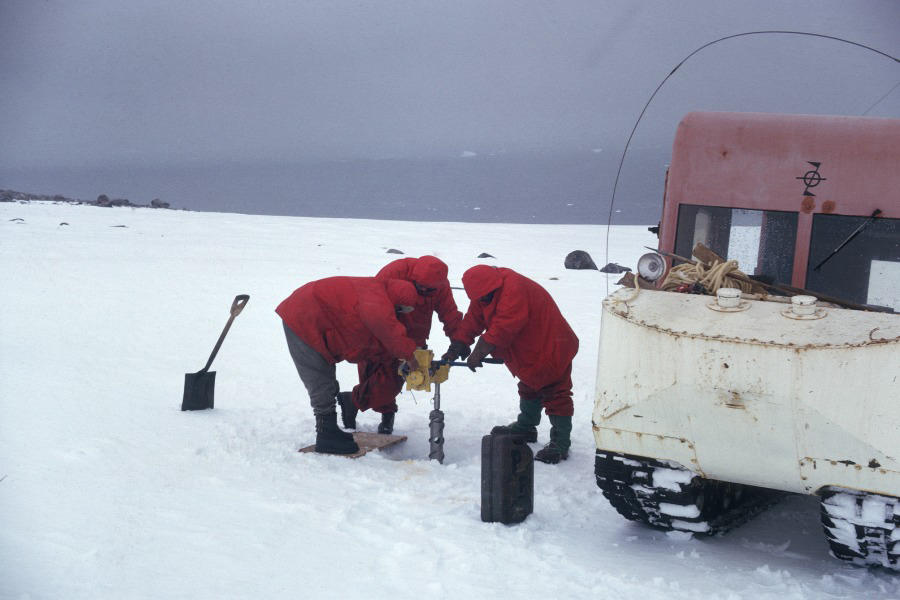 But it doesn’t stop there. During the winter of 1965, while in charge of the Dumont d'Urville base in Antarctica, Claude and his team carried out the first drilling operations in the coastal ice of this immense continent. After a hard day’s work, he tossed a piece of ice from the drilling operation into his well-earned glass of whisky. On seeing the pressurized air bubbles trapped in the ice suddenly burst and release the gas inside them, Claude imagined that this air might be used to reconstitute the composition of the atmosphere in bygone times. Between this initial idea and reliable results, a period of 20 years elapsed which saw technical developments, as well as countless studies and failures. With two of his ex-doctoral students, Dominique Raynaud and Robert Delmas, he finally reached the Holy Grail using the 900 m core drilling operation which he oversaw at Dome C in 1977/78, followed by the famous Lake Vostok borehole drilled by a Russian Arctic Expedition in 1984, which reached a depth of 2000 meters.

The upshot was a very famous triptych published in Nature in October 1987 consisting of three articles and a cover showing the drilling towers on Lake Vostok. This triptych contained for the first time a detailed description of Antarctic climate change over 150,000 years, in other words a complete climate cycle. Furthermore, it revealed for the first time, the concomitant change in atmospheric carbon dioxide levels, thanks to data measurements made by the late Jean-Marc Barnola. For the first time, a striking correlation between the two indicators emerged. Above all, as Claude would qualitatively demonstrate in the early 1990s, the role of CO2 in natural climate change—through its radiative impact— became a key factor in accounting for glacial-interglacial climate change. A knock-on effect ensured that the impact of increased atmospheric CO2 levels resulting from human activities over the last 200 years took on a new dimension. 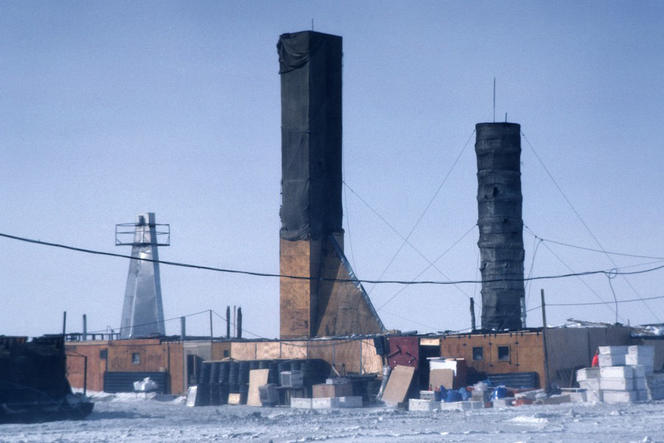 This picture of the 3 drilling towers at Vostok was featured on the cover of the journal Nature (1984-1985). 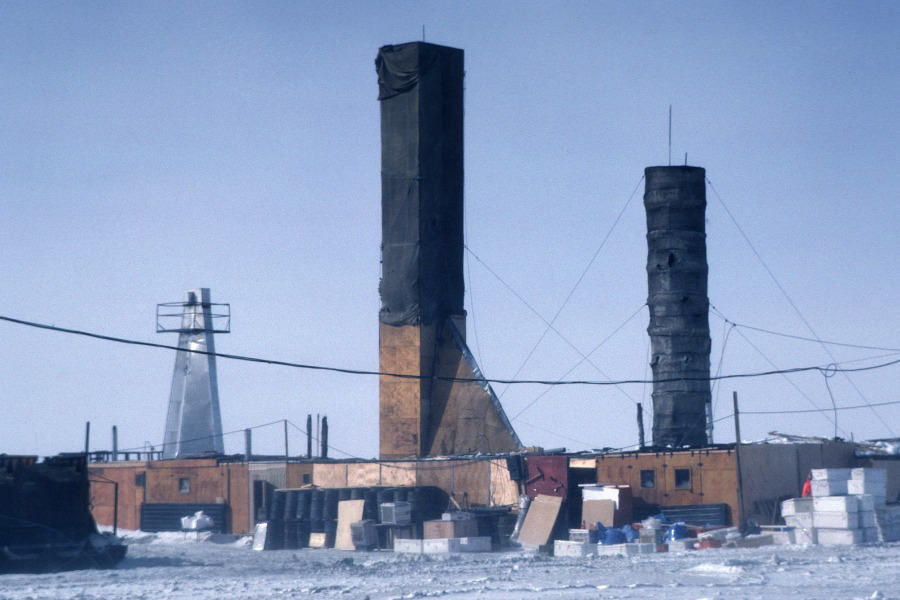 How have these measurements been refined since his initial research?
J.C.: Although Claude left his team in the early 1990s as they continued the research program, this science did not dwindle away: far from it. We owe Claude—who was the first president of the French Polar Institute—several momentous achievements. One of these was his effort to create the European EPICA consortium and to build the Franco-Italian Concordia base in Antarctica. This made it possible to drill to a depth of 3270 m at the Dome C site which enabled us to study changes in the climate and in the Earth’s atmosphere over the last 800,000 years, in other words 8 full glacial-interglacial climate cycles! Advances in technology made it possible to analyze these changes in far greater detail and highlight regional disparities in temperature change, while reconstituting other important parameters in the climate system, such as the extent of sea ice, the intensity of continental dust sources, and the intensity of volcanic eruptions, among a number of other factors. 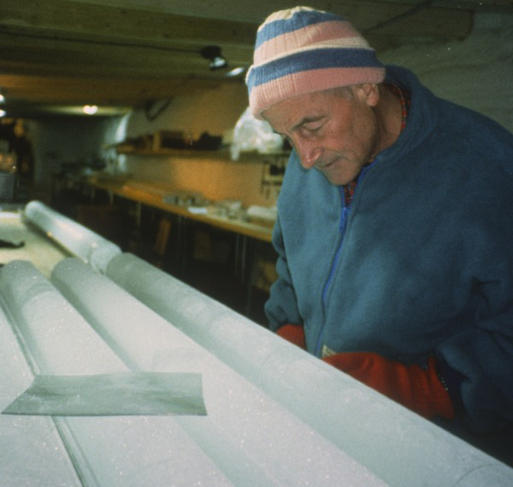 Claude Lorius examines a set of ice cores during a visit to the GRIP (Greenland Ice Core Project) as president of the Polar Institute (1992). 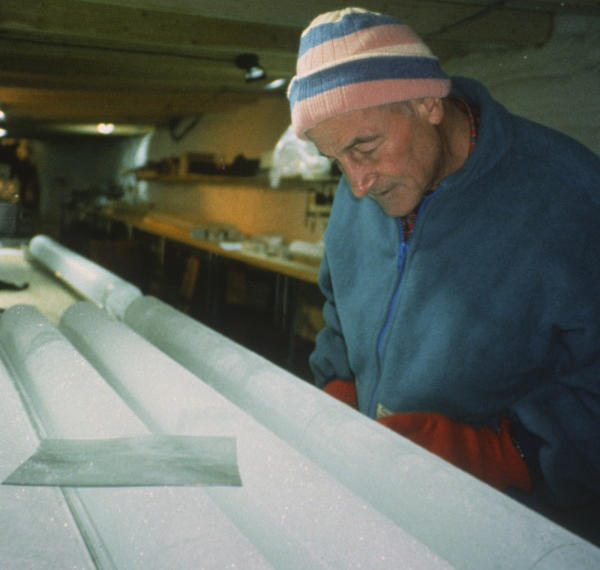 What current projects directly or indirectly expand on the original findings of Claude Lorius?
J.C.: Our science is alive and well. Today our community is trying to locate in Antarctica ice formed 1.5 million years ago. The objective is to study the climate change that took place in the Middle Pleistocene, around 1 million years ago. This age is an enigma, characterized by marked change in the rate and amplitude of glacial-interglacial climate cycles. We hope to be able to accurately record for the first time comparative changes in levels of CO2 and other greenhouse gases that might have caused this major change.

In Grenoble, the way we are broaching the subject is very innovative. Over the last 5 years, and particularly in the context of my ERC Ice & Lasers project, together with the laboratory’s technical team, we have designed and built a sensor that contains a laser spectrometer. The objective is to be able to drill through the Antarctic glacier in just 2 months and get the information needed to validate the existence of sufficiently old ice, but also to immediately extract some of the data that is of primary interest.

The science of ice cores is also evolving in terms of our ability to read the natural alphabet contained in ice. Technological advances and new ideas are leading to studies that were previously inconceivable. For example, we can now identify volcanic eruptions in which the plume reached the stratosphere, that therefore had an important effect on climate. We also have new markers that help us understand how vegetation fires evolved, or the degree of moisture at the surface of oceans responsible for generating water vapor that gave rise to the snow and ice we are studying. 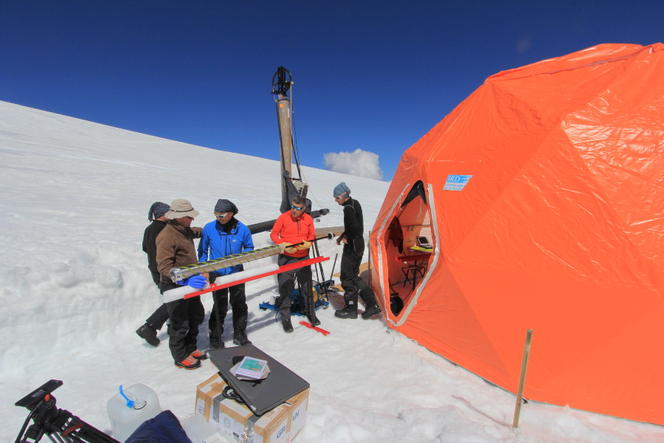 Part of the "Ice Memory" program, researchers extracted ice cores from the Mont Blanc massif in 2016 to be stored at the Concordia station in Antarctica. 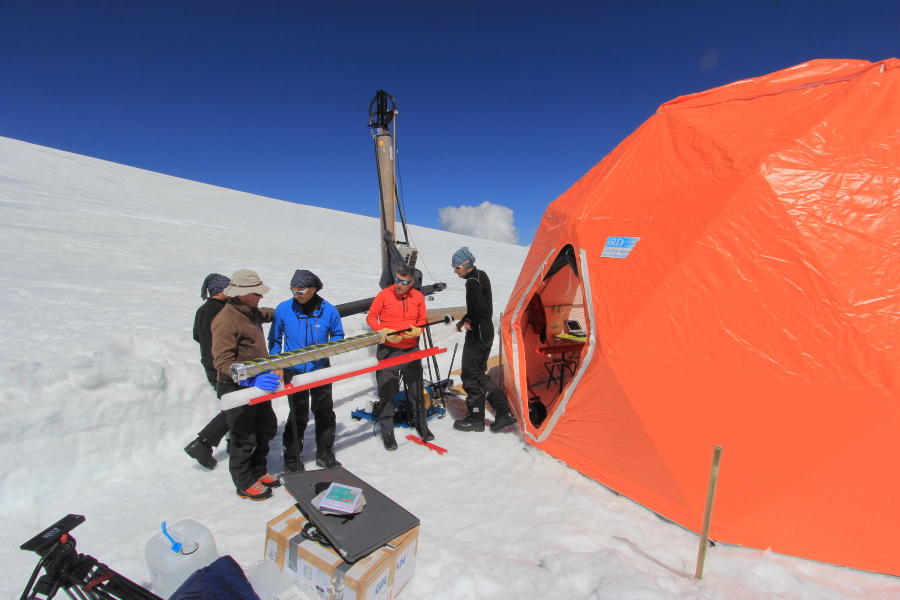 And there is another paradox: ice—this incredible natural repository of memory about the Earth’s climate and environment—is threatened by global warming. As a result, we have a new challenge: collecting high-quality raw material from mountain glaciers and storing it in Antarctica for use by future generations before it is too late. This project, known as "Ice Memory," which I began in 2015, has already seen its first operation under the summit of Mont Blanc. This spring, my colleague Patrick Ginot will be carrying out a second operation at the summit of the Illimani glacier in Bolivia.

Throughout his entire life, Claude Lorius has fought for the Earth and tried to show the devastating effects of human activity. What does he think of the current political and social climate, in terms both of positive initiatives such as the signing of the COP21, and of climate-change scepticism, which appears to be making a comeback?
J.C.: You may want to ask him directly… but after spending much time with him over the last few years, I think that Claude now has renewed hope. In the 2000s, he was dogged by pessimism, but the interest in his background shown by film director Luc Jacquet gave him fresh hope. The key message of this unique film, which rode on a wave of emotion, was important for Claude. Despite what is currently happening with the new US administration’s stance on climate, the lines have shifted towards common sense. Even the owners of large industrial companies have clearly understood that they cannot simply sit idly by and do nothing. China in particular is investing heavily in new technologies in a bid to become the leader of a world in which human development and environmental imperatives need not necessarily be in opposed notions. I think that overall, Claude is happy about this, although he would have obviously preferred our political leaders to introduce strong measures much earlier.

Saman Musacchio
See author's bio
This Animal is an Expert in RegenerationPrevious
Claude Lorius, a Life on the IceNext

Slideshow
Did the Mont-Blanc Glaciers Shrink Before?