Home / Articles / A New Diet to Slow Down Alzheimer’s Disease?

A New Diet to Slow Down Alzheimer’s Disease?

Home / Articles / A New Diet to Slow Down Alzheimer’s Disease?

A New Diet to Slow Down Alzheimer’s Disease?

Astrocytes in the hippocampus of the mouse brain. In blue, the cell nuclei.
Laboratoire des maladies neurodégénératives (CNRS/CEA/UNIV Paris Saclay)
Share
Share
French scientists have discovered a metabolic deficit that may be central to the cognitive disorders linked to Alzheimer’s disease. In the longer term, this raises hopes of a potential therapeutic approach designed to delay the onset of symptoms by means of dietary supplementation.

Because the mechanisms underlying Alzheimer’s disease are still not fully understood, until now the search for a treatment to check this neurodegenerative condition had reached stalemate. This failure was partly due to the fact that the therapeutic solutions envisaged focused mainly on patients whose cerebral lesions and cognitive symptoms were already far advanced. Would it not be more effective to initiate therapy as soon as the initial disorders develop?

Noting that several imaging studies had evidenced a reduction in the brain’s glucose consumption at a very early stage of the disease, scientists “sought to determine whether this change to the metabolism of glucose, which is the principal source of energy for neurons, was indeed at the origin of cognitive disorders, so that could, if relevant, try to identify the molecular mechanisms at play”, explains Gilles Bonvento, deputy director of the Neurodegenerative Diseases Laboratory in Fontenay-aux-Roses, near Paris.1 To achieve this, his team initiated a collaboration with colleagues at the Neurocentre Magendie in Bordeaux (southwestern France)2 in order to study the role of astrocytes, glial brain cells that had long been restricted to the role of neuron support, although it is now known that they perform a broad range of key functions that regulate the transmission of information in the brain.

At the heart of astrocyte metabolism

“Via the blood vessels to which they are connected, astrocytes capture glucose before transforming it into different metabolites, including the amino acid L-serine, the precursor of D-serine,” explains Aude Panatier, a neurobiologist who works in the team led by Stéphane Oliet at the Neurocentre Magendie. “This D-serine then acts as a gliotransmitter in the hippocampus where, once released at the synaptic level, it binds to the NMDA neuronal receptors that play a crucial role in learning and memorisation.”

The enzyme that synthesises L-serine, in green, is expressed in astrocytes of the mouse hippocampus (in red).

During a study published recently in Cell Metabolism,3 Aude Panatier and Gilles Bonvento sought to find out whether a D-serine deficiency might be responsible for the symptoms that appear during the early stages of Alzheimer’s disease. In a group of young mice that had been genetically modified to provide an animal model for the condition, the scientists started by determining the glucose consumption of several regions of the brain, including the hippocampus, the seat of spatial memory. They also quantified the degradation of glucose in astrocytes while measuring the production of D-serine and L-serine. The results of these analyses showed that “these animal models displayed a reduction in the absorption of glucose in the brain regions studied, together with a lower production of L-serine and D-serine”,  Gilles Bonvento adds.

An amino acid as a remedy

Although the number of synapses mobilised was equivalent in the two groups of rodents, a decrease in the activity of NMDA receptors was nevertheless observed in the transgenic mice. “This first series of results tended to show that the loss of synaptic plasticity was caused by a lower availability of D-serine at the synaptic level, which in turn reduced the number of NMDA receptors available for activation,” explains Aude Panatier. 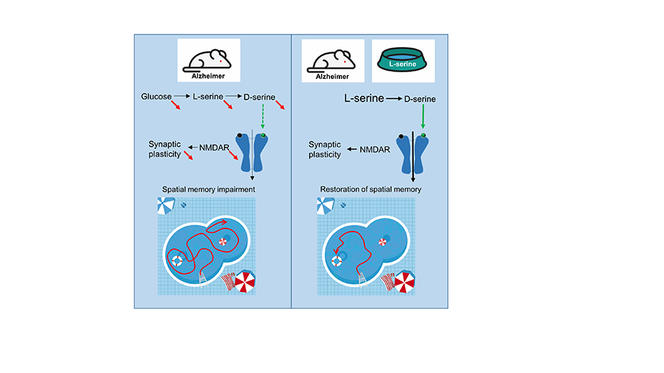 In mice that had been genetically modified to model Alzheimer’s disease, a low production of serine was observed, together with weaker activation of the NMDA receptors, causing a reduction in synaptic plasticity and a deterioration of spatial memory (left). Plasticity and spatial memory performance were restored in these mice after they were fed a serine-enriched diet (right). 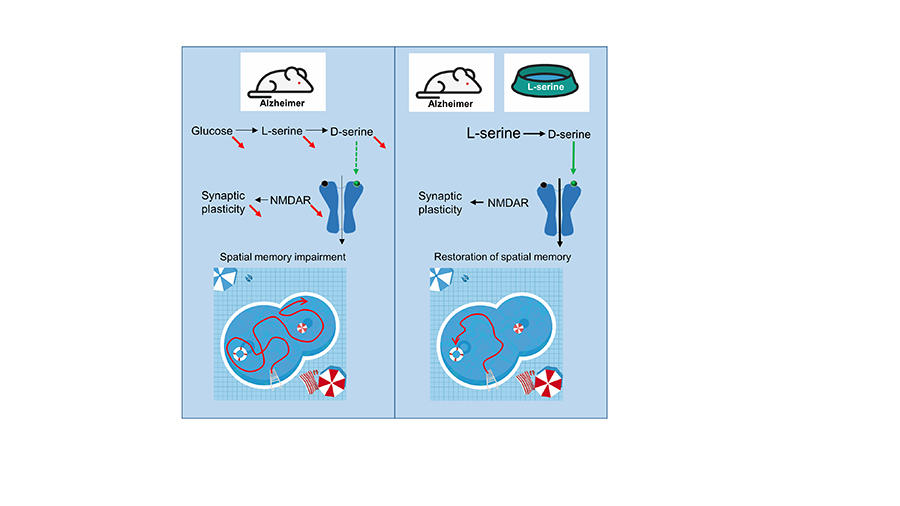 In mice that had been genetically modified to model Alzheimer’s disease, a low production of serine was observed, together with weaker activation of the NMDA receptors, causing a reduction in synaptic plasticity and a deterioration of spatial memory (left). Plasticity and spatial memory performance were restored in these mice after they were fed a serine-enriched diet (right).
Gilles BONVENTO
Gilles BONVENTO
Share
Share

To confirm this hypothesis, the scientists then gave the transgenic mice a feed enriched in L-serine (unlike D-serine, this substance is not toxic to the kidneys) with the aim of restoring the activity of NMDA receptors and their associated plasticity and memory. The result was that after just two months on this diet, the rodents successfully passed the spatial memory test they had failed without treatment.

The same L-serine supplement was also given to a group of transgenic mice incapable of synthesising this amino acid. “We wanted to check that the deficits observed were only associated with a reduction in the synthesis of this amino acid, and that they could be restored by means of an L-serine enriched diet,” explains Gilles Bonvento. When challenged with the spatial memory test, the animals had no problems, thus confirming that the L-serine supplied by their diet had indeed served to maintain their synaptic memory.

A first step towards a potential treatment

“Our work testifies for the first time to the existence of a close link between the metabolism of cerebral glucose and the release of a gliotransmitter that plays a crucial role in neuronal communication and memory,” Aude Panatier sums up. The study also revealed that changes to synaptic plasticity and memory, which are also early symptoms of Alzheimer’s disease in humans, could both be restored by the ingestion of L-serine.

This raises real hopes regarding the development of a new approach that could complement other therapeutic strategies and be able to delay the onset of cognitive disorders related to this neurodegenerative condition. Yet although the results obtained by the French scientists are undoubtedly very encouraging, a potential L-serine-based treatment is still a long way away. “Before we can plan for initial clinical trials in humans, further investigations must be carried out in several other mouse models in order the confirm the efficacy of this amino acid and its long-term effects,” Gilles Bonvento points out.

Article
Sea monsters at the time of the dinosaurs
Neuroscience