Researchers from the Canadian University of Toronto collecting ancient water from fractures in the Kidd Creek mine in Ontario, Canada.
Barbara Sherwood Lollar /Stable Isotope Lab/University of Toronto
Share
Share
At the bottom of mines or beneath the ocean floor, drillings reveal the presence of vast communities of microorganisms in the subsurface of our planet. Scientists believe this could be due to natural radioactivity in rocks, which may offset the lack of sunlight and organic matter.

Right beneath our feet lies an unknown world. Over the past twenty years, mainly thanks to drilling carried out at the bottom of mines and beneath the ocean floor, scientists have gradually uncovered a totally unsuspected world of subsurface microbial life. Much to their surprise, this biosphere, principally made up of bacteria and archaea that can survive at depths of up to several kilometres, thrives underground everywhere: in marine sediments, in lakes located under ice sheets, in hydrocarbon reservoirs and even in the tiniest cracks inside rocks. In fact, it is estimated that these subsurface “intraterrestrials”, as some have dubbed them, could make up as much as 15% of the Earth's total biomass, and account for more than 70% of all terrestrial bacteria and archaea. “Their diversity is extraordinary as well, and is even greater than on the surface,” points out Bénédicte Ménez, a geomicrobiologist at the IPGP.1 “This can be explained by the variety of conditions (hot, cold, saline, acidic, etc) underground, which organisms have adapted to as they evolved.”

Radiolysis of water, a reaction conducive to life underground

The presence of these organisms deep under the Earth's surface raises a major question: how do they survive in places where the sunlight required for photosynthesis is completely absent, and where the small amount of organic (i.e. carbon-containing) matter that is transported down from the surface rapidly disappears? Of course, biologists are well aware that microbial communities proliferate near hydrothermal vents on the ocean floor, and in subsurface regions heated by volcanic activity on the continents. In these cases, microorganisms derive their energy from the chemical reactions that take place when seawater or rainwater mix with fluids that rise from deep within the Earth. But outside such oases, the question remains unanswered.

Research by several teams around the world, including scientists at the CNRS, is beginning to shed light on the mystery. Their findings reveal that natural radioactivity is an important source of energy for the deep biosphere. This is due to the fact that ionising radiation produced by the radioactive elements (uranium-238, thorium-232 and potassium-40) found in rocks, breaks down groundwater into hydrogen and highly-reactive chemical species called radicals. Microbes can then use the hydrogen, a gas they thrive on, as an energy source. At the same time, calcite (calcium carbonate), a mineral found in the surrounding rocks, is dissolved by water, and these carbonates then react with the radicals, forming small organic molecules (formate, acetate and oxalate) on which these organisms can feed. “With this reaction you can synthesise all the ingredients needed for subsurface life, just from water, the radioactive elements found in many rocks such as granites, and calcite, which is very common,” explains Laurent Truche, a geochemist at the Institute of Earth Sciences (ISTerre)2 and author of a recent study on the subject.3 “We can therefore hypothesise that the radiolysis of water enabled these organisms to develop in a wide range of environments, including very nutrient-poor ones, far from any hydrothermal sources or volcanic activity.” 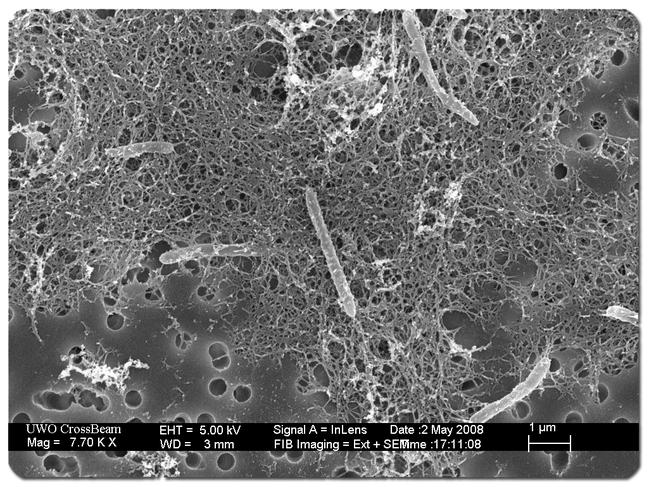 Colony of Candidatus desulforudis (Desulforudis audaxviator) discovered in a gold mine in Mponeng, South Africa. 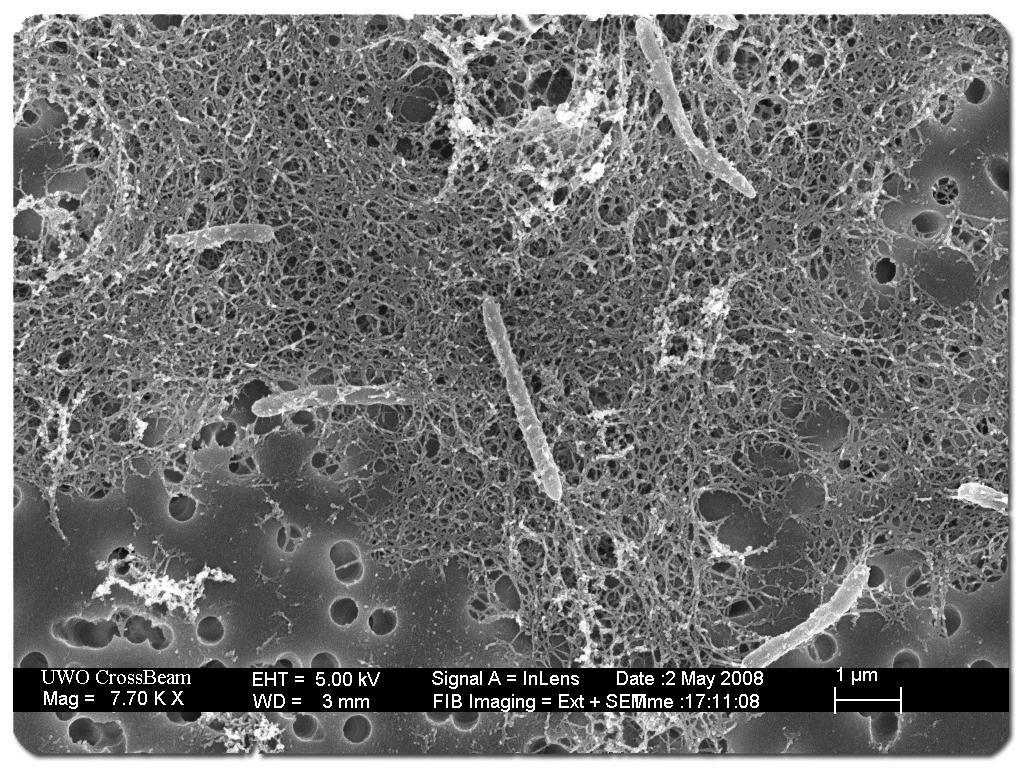 Water radiolysis had been investigated in chemistry laboratories well before microbiologists became interested in it. Observed for the first time by Marie Curie at the beginning of the twentieth century, it has in particular been studied in the core of nuclear reactors (where the radioactive fuel is cooled by immersion in water), in deep storage of radioactive waste, and in nuclear medicine.

Things changed in the 2000s when geologists discovered the presence of large amounts of hydrogen in water trapped in fractures in the continental crust, at the bottom of mines in South Africa, Canada and Finland. “Several geological processes can produce hydrogen, but two are particularly well-known: interactions between volcanic gases, and serpentinization, in other words, the alteration by water of iron-rich minerals such as olivine,”  Truche explains. “However, neither of these mechanisms could explain these findings. So we had to come up with another pathway. And water radiolysis turned out to be a serious candidate.”

Hydrogen, the fuel of the subsurface biosphere

At the same time, biologists’ surveys of the deep biosphere revealed that many microorganisms use hydrogen as a fuel. Genetic sequencing of samples collected from the subsurface showed the presence of genes coding for enzymes that can use hydrogen as an energy source. This is exactly the kind of organism that has been found at the bottom of the South African, Canadian and Finnish mines. What's more, studies in the Canadian pit have shown that the water where populations of bacteria have been detected has remained sealed off from the surface, with no external input, for at least a billion years. This means there had to be an independent energy source capable of sustaining biological activity over a very long period of time. In 2005, Barbara Sherwood-Lollar's team at the University of Toronto was the first to put forward the hypothesis that, on the basis of these various clues, it was radiolysis that fuelled subsurface life. 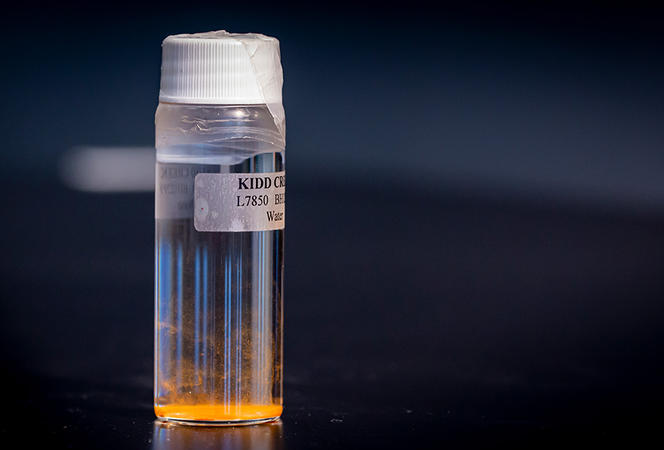 Sample of ancient water collected from deep within the Kidd Creek mine in Ontario, Canada. In the water, researchers have detected hydrogen, sulphate and abiotically produced organic compounds that can sustain life underground. 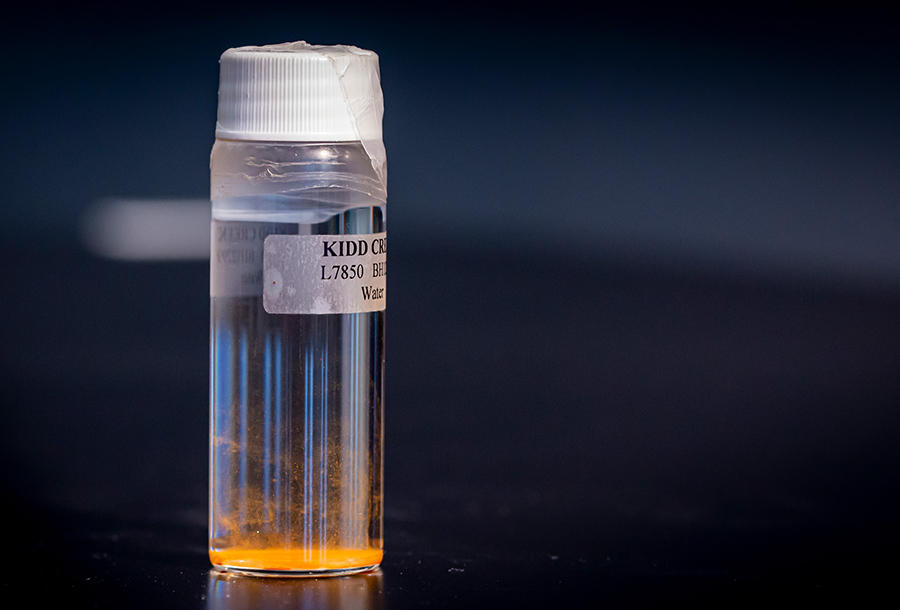 This scenario was subsequently supported by further evidence. The Canadian researcher and her colleagues first showed that certain radicals produced during radiolysis could react with the sulphides found in abundance in the surrounding rocks, producing the sulphates observed in deep fluids, and which are vital for bacteria. “The process by which microorganisms derive their energy is a redox reaction,” Ménez explains. “For this to take place, you need both an electron donor, hydrogen, and an electron acceptor, sulphate.”

The above-mentioned detection recently of small organic molecules (formates, acetates and oxalates) has now lent considerable weight to the radiolysis hypothesis. However, the link between the two was not discovered immediately. “It was partly by a stroke of luck that we made the connection,” says Johan Vandenborre, a radiochemist at the Subatech laboratory.4 “In 2017, during experiments carried out in the context of radioactive waste storage, my team and I showed that, in the presence of carbonates, the radiolysis of water produced formates, acetates and oxalates. Two years later, at a conference, it was reported that these same compounds had been found in mines where microbial life had been detected. As far as I was concerned, there was an obvious explanation: the molecules in question had been produced by radiolysis.” 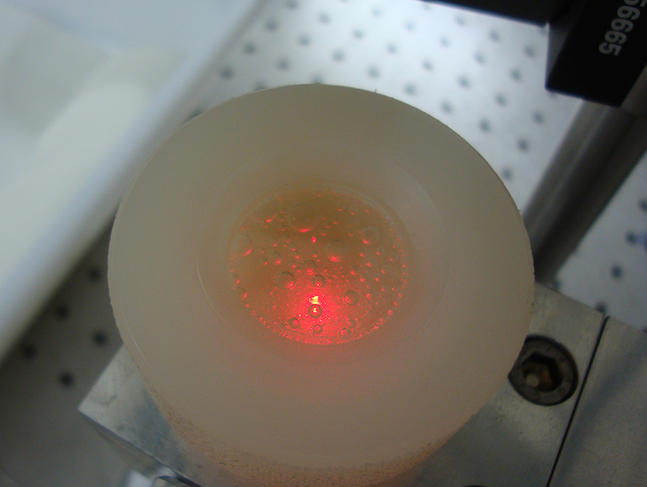 Bubbles of hydrogen gas obtained by radiolysis of water. (Research by Laurent Truche and Johan Vandenborre at the Arronax Cyclotron). 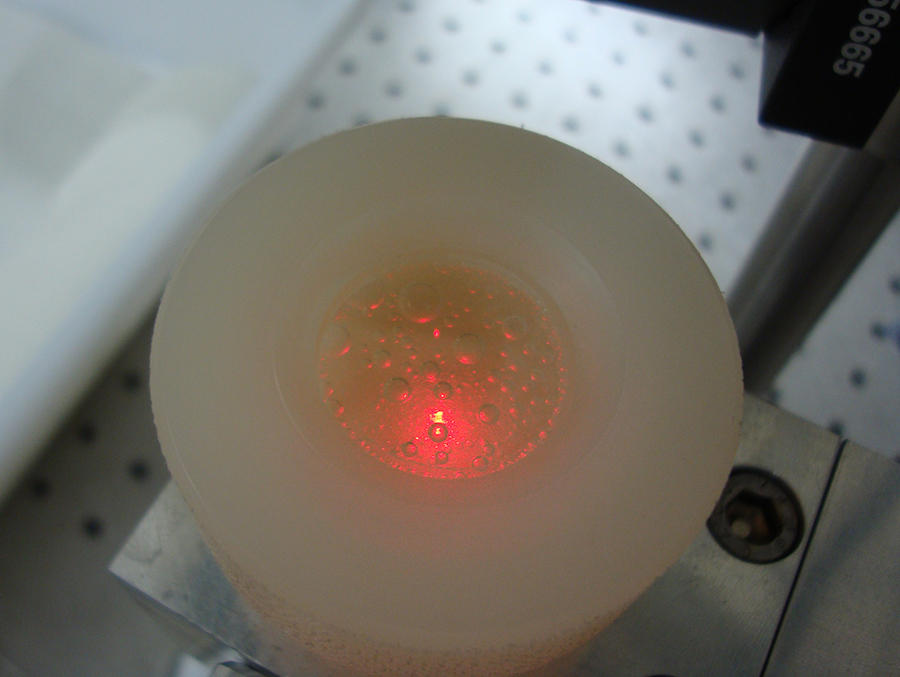 In an attempt to confirm this, Vandenborre joined up with Truche. Together, they conducted an experiment in which they exposed water containing dissolved carbonates to a beam of alpha rays (just like those emitted by radioactive rocks) produced by the Arronax cyclotron, in Nantes (western France). They then varied both the intensity of the radiation and the concentration of the reagents, each time measuring the quantity of organic molecules produced. The results they obtained precisely matched the amounts found in natural rocks.

The puzzle may well have finally been solved. By providing a source both of energy and of carbon, and all this without any exchanges with the surface, radiolysis really does appear to be the process that sustains the deep biosphere. And as well as being vital for today's intraterrestrials, it may also have played a key role in the development of the very earliest life forms. As radioactivity has been around ever since the Earth came into existence, it could have sustained the first microbial life. From this perspective, radiolysis lends credence to the idea, defended by some, that life first emerged underground. “This type of environment would have been a safe one, protected from the many hazards present on the surface of the early Earth, such as meteorite bombardments, a toxic atmosphere, and high levels of radiation,” Truche points out.

And that's not all. In addition to playing a central role in maintaining the first life forms, radiolysis may also have led to the synthesis of prebiotic organic molecules, a requirement for the emergence of life. “Radiolysis takes place where water is confined inside rock, within micrometre-sized pores and fractures,” Ménez explains. “So when organic compounds are created, they are concentrated within a very small volume, which could then facilitate the formation of more complex molecules. Especially as the minerals present in rocks can catalyse organic synthesis reactions.” 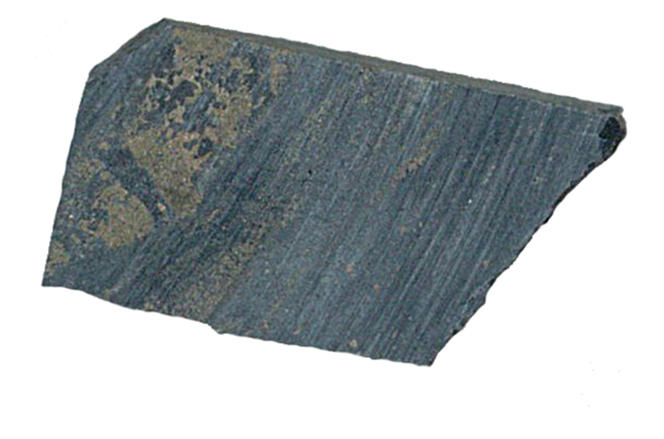 Precambrian rock from the Kidd Creek mine in Canada. The ochre-coloured layers are sulphides, which are converted by radiolysis into sulphates, used by the microorganisms in these deep environments for respiration. 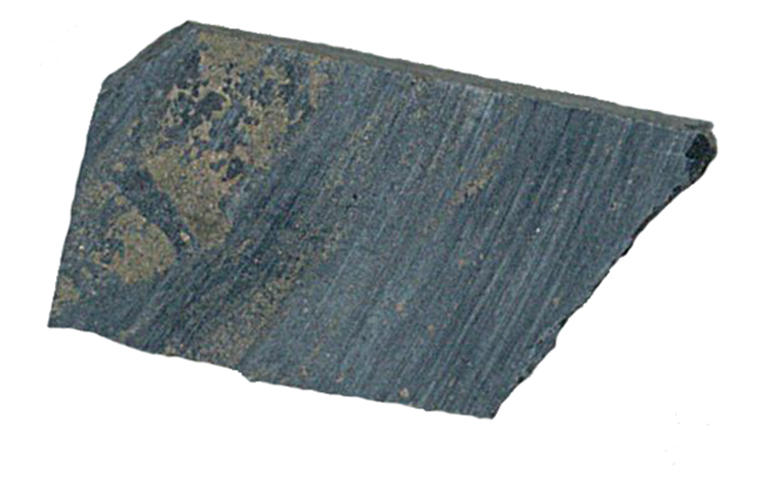 Admittedly, the organic molecules detected in samples of continental crust or synthesised by radiolysis in the laboratory have so far proved to be very simple ones. However, radiolysis research is still in its infancy and may well hold many surprises in store. “Analyses of rocks drilled from mines in Canada carried out in my lab have already revealed the presence of organic compounds that are far more complex than formate, acetate and oxalates,” says Ménez, who is about to publish a paper on this work. “For the time being, our radiolysis experiments are still too simplistic compared to what happens in nature,” Truche adds. “Eventually, our goal is to add chemical elements such as sulfur and nitrogen, together with a more diverse range of minerals, in the hope of detecting even more complex organic molecules.”

Looking beyond Earth, the discovery of radiolysis as a driver of the deep biosphere is also great news for the search for extraterrestrial life. We already know that all the ingredients needed for this process (water, radioactive elements, and carbonates) are present on many other bodies in the Solar System, such as the planet Mars and Enceladus, one of Saturn's moons. There too, radiolysis could have sustained subsurface life several billion years ago, and may even continue to do so. This idea is already starting to gain ground and could guide robotic space exploration in the future, depending on the mineralogical composition of the terrain for example. “So we wouldn't just be looking for fossil organisms but for actual living microorganisms! That would be incredibly exciting,” Ménez concludes.

Article
A Bite into the Past of Extinct Marine Reptiles

Slideshow
History Down the Drain
Interdisciplinarity