Home / Opinions / Scientists in the Cockpit

Scientists in the Cockpit

Home / Opinions / Scientists in the Cockpit

Scientists in the Cockpit

Yves Rémond
From engines to landing gear, science is present everywhere on board an aircraft. Following last month's Paris Air Show, here is a quick overview of recent advances, arising in particular from research conducted by CNRS laboratories.

Airplanes are among those objects that concentrate the genius of humans. Although their appearance seems hardly to have changed over the past fifty years, they in fact conceal impressive evolutions to which about a hundred CNRS laboratories in engineering science have largely contributed. Today all of these machines boast new materials, lighter and more reliable structures, optimized airflow around the wings, better combustion in the turbojets, reduced sound output, lower harmful emissions and fuel consumption, along with better control over frost, more efficient brakes and—to top it all—optimized pilot assistance systems. Three central components, namely structure, motorization, and on-board systems, whose cost is roughly the same, have all benefited from advances in research.

Structure, to start with, comprises the fuselage, wings, and tailplane, as well as the hidden structures that provide rigidity and resistance to the aircraft. They are exposed to many pressures resulting from rolling along the runway, vibrations and fatigue caused by in-flight stress, variations in temperature, and the ageing of materials.

All of these structures were initially made entirely of metal, but eventually became lighter through the use of increasingly high-performance materials, since metals are sometimes heavy and needlessly resistant in relation to their ultimate purpose. As a result, lighter alloys were used early on, and were succeeded by the era of composite materials reinforced with carbon fibers lined with polymers. For instance, the already long-serving Airbus A320 contains 4.5 tons of composite structures that helped shed more than a ton of weight in comparison to a metallic structure—and save thousands of tons of jet fuel over the life of the airplane. For the A380, the composite piece to which its giant wings are attached lightened the aircraft by 3 tons. While composites represented a mere 5% of an airplane's structure 40 years ago, they now exceed 50% in the latest airliners. These materials have even taken over the brakes! The distant successors of pre-1950s brake drum systems, they now use carbon-carbon units that preserve their properties up to 2,000 °C, and can thus release all of an aircraft's kinetic energy in a few seconds. 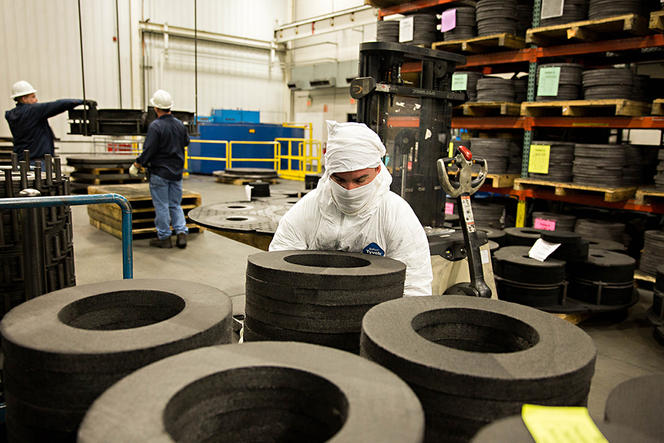 Carbon discs at the Safran Landing Systems site in Kentucky (US), which produces and refurbishes carbon discs and as manufactures wheels and brakes for the aeronautics industry. 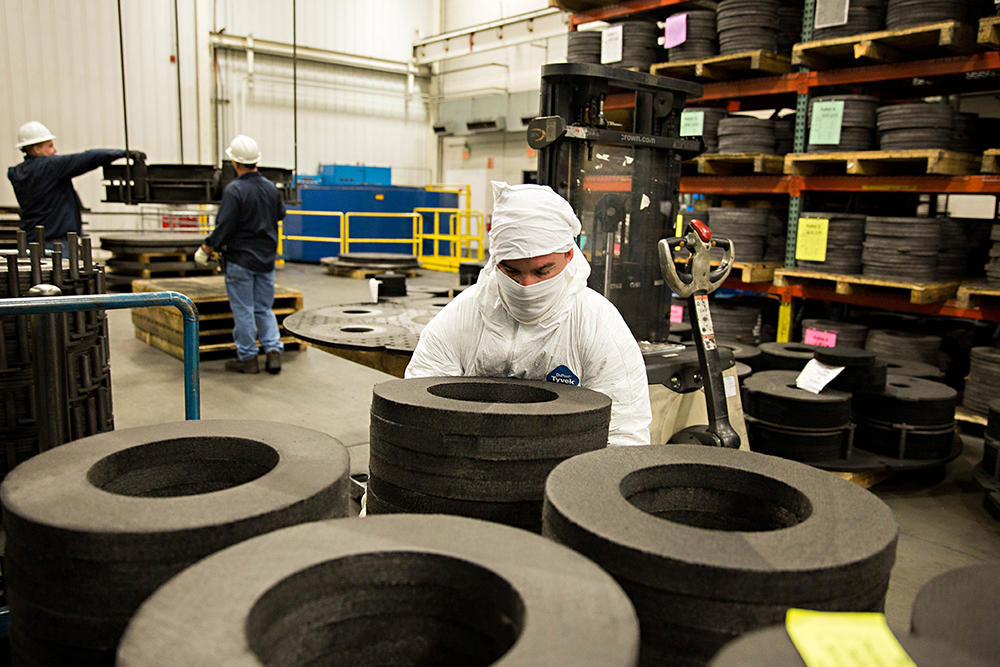 On the down side, the ways in which composite materials sustain damage are significantly more complex to predict than those of metals. In fact, for the latter, the appearance of cracks due to fatigue was not immediately understood. It was not until airplanes imploded in mid-flight during the 1950s that studies helped discover the role played by fatigue, which causes fissures over time through repeated stress, even though most of it would have been withstood perfectly well if applied continuously rather than repeatedly. Only then were fatigue calculations systematically used for airplanes.

The presence of cracks in the structure of an aircraft is normal and closely monitored, but the key issue is to predict their spread, a highly complex exercise that depends on numerous parameters. Recent research, however, has made it possible to accurately anticipate such spread and hence a plane's durability.

An interesting paradox is that composite materials crack at a very early stage, but resist fatigue much better than alloys; they are, however, more sensitive than metallic alloys to the presence of holes, the starting point for damage. So why not stop making holes? As it happens, it is the most widely used method of assembly, with some large airliners today counting millions of them. As a result, calculations for predicting breaks in the vicinity of these holes are crucial. In the end, given that airplane structures with holes also experience fatigue, composite materials are indeed the best option.

Motorization has also seen considerable progress. The phenomena involved are, once again, highly complex, involving turbulent flows, sustained combustion, as well as extremely high temperatures, for the higher the temperature the better the engine's output. Researchers are striving to improve their understanding of combustion, with one priority in mind: society is rightly demanding lower fuel consumption and noise pollution, along with greater reliability. The LEAP engine, the most recent airplane motor developed by Safran and General Electric, is a good example of progress based on decades of research by CNRS laboratories and their partners. It has reduced fuel consumption by nearly 15% and nitrogen oxide emissions by 50%, and will equip most new single-aisle aircraft, already selling a record of more than 12,000 units. 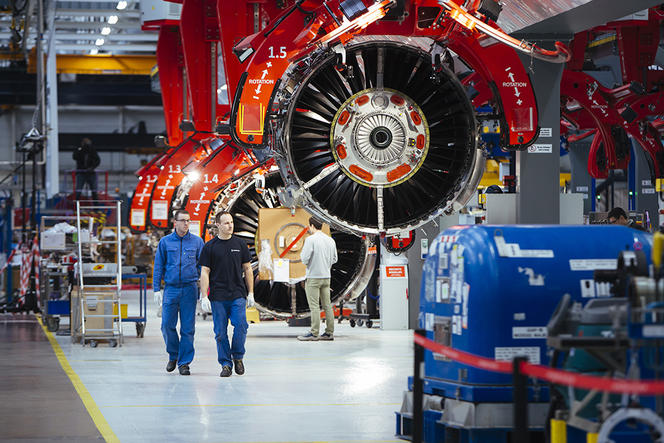 Assembly line for the production of the LEAP engine, which equips new-generation single-aisle aircraft. 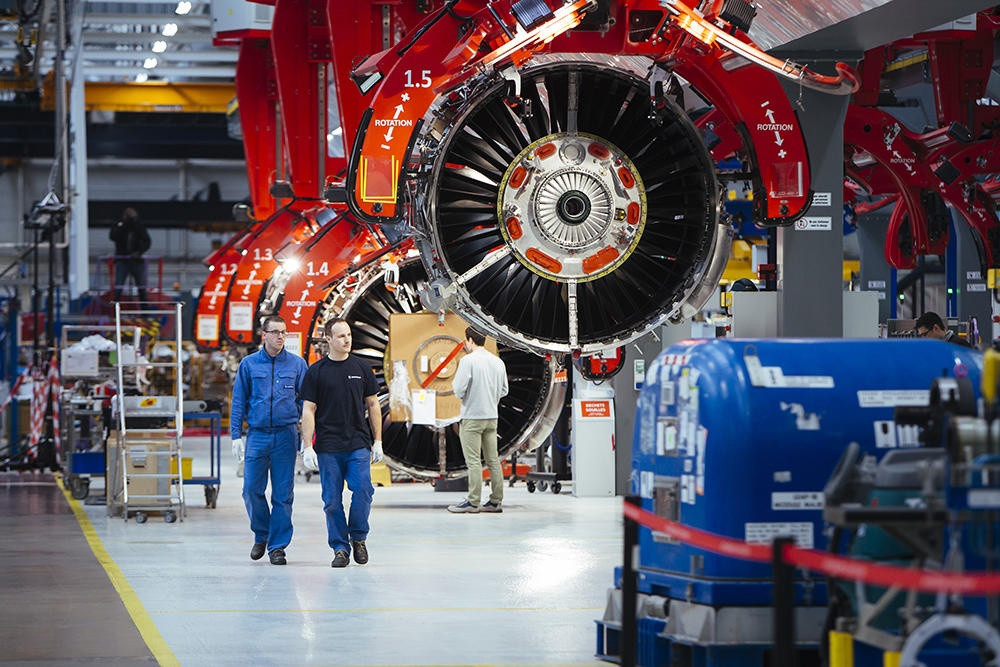 As for on-board systems, they include all of the IT equipment (hardware, software) needed for piloting and control, along with sensors, radios, radars, etc. These elements must withstand with unfailing reliability all of the pressures of flying: jolts, vibrations, intense external cold, bad weather, lightning, extreme heat in proximity to combustion, as well as a lifespan of multiple years. They also consume energy, which must be available on board. An A380, for instance, requires 400 to 600 kilometers of cables. Finally, all connections must be protected, which also represents a permanent challenge... that is being met by numerous French laboratories.

Many other fields remain to be explored, some of them quite unexpected, such as tests on "mesostructures" aimed at limiting the number of tests that must be conducted to design a new aircraft, while increasing the quantity of information collected. Research is not short of ideas for flying the airplanes of the future. 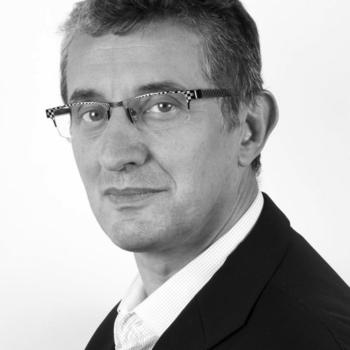 Yves Rémond is a professor of mechanical behavior of materials, polymers and composites at the University of Strasbourg (ECPM). He is Deputy scientific director of the CNRS Institute of...