Home / Opinions / New Perspectives on the Emergence of Life

New Perspectives on the Emergence of Life

New Perspectives on the Emergence of Life

Ludovic Jullien
How did life emerge on Earth? Ludovic Jullien, who chairs the PASTEUR laboratory in the chemistry department of the Ecole Normale Supérieure (ENS) explores two different perspectives in light of an international conference on the subject to be held in Paris in December.

Just one year ago, the space probe Philae landed on comet 67P/Churyumov-Gerasimenko. This event truly captivated the world, as did the more recent discovery of the presence of liquid water on Mars. One reason is that beyond the incredible scientific and technological achievements, the questions that these missions seek to answer have long been at the heart of human preoccupation: how did life appear on Earth and does it exist elsewhere? 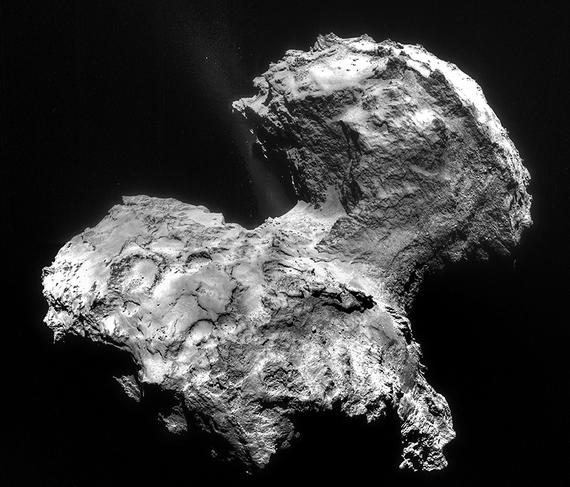 Scientists continue to study comets (pictured here 67P/Churyumov–Gerasimenko) in order to determine whether life's building blocks can form in the harsh environment of deep space. 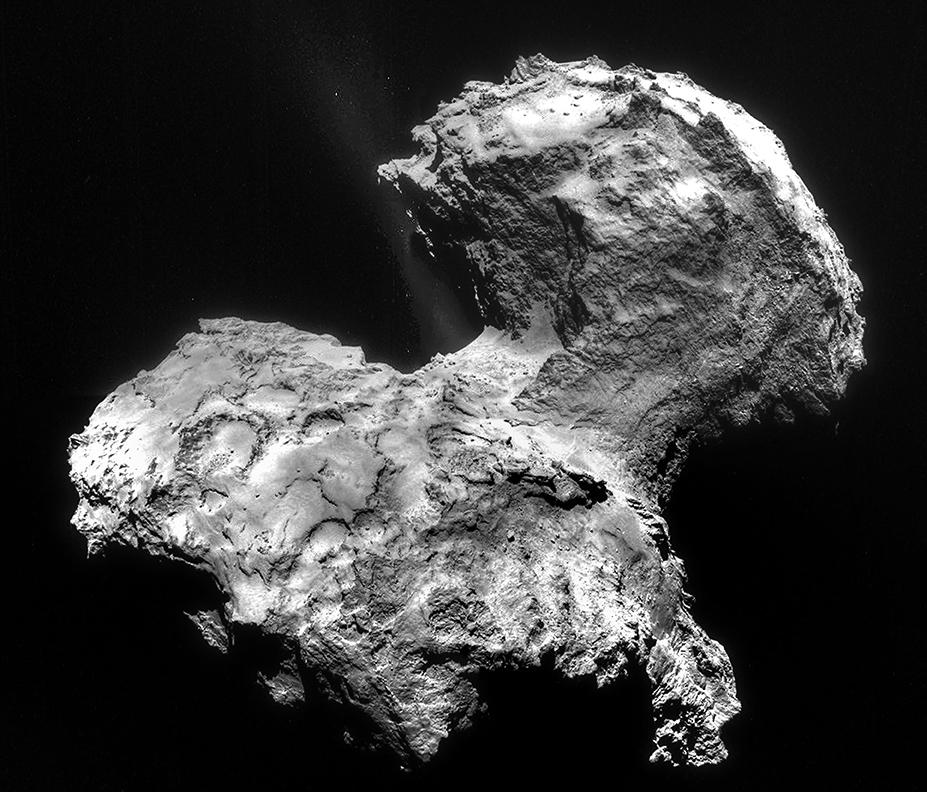 Still only speculative a few decades ago, these issues are now active fields of research involving all areas of science, including astronomy and astrophysics (the discovery of extrasolar planets and improved knowledge of the Solar System through space probes), or chemistry and biology (with advances in the prebiotic world, the emergence of living matter, and the key stages of evolution).

Most of this research has focused on reproducing the composition and organization of living cells.

So how did life appear on Earth? Indeed living matter has always appeared highly singular against the background of “inert” matter, raising both interrogations concerning its emergence, and attempts to convey its original features to inanimate objects. Over the course of the 20th century, research avenues began to be investigated at the cellular level, leading to increased knowledge of the molecular components of living cells, their interactions, and reactions. This resulted in the adoption of two different perspectives on the subject: one focused on how cell components formed, the other on the dynamics of intra-cellular organization.

Most of the research dedicated to understanding how life emerged has been tied to reproducing the composition and organization of living cells as we know them. This perspective has generated much experimental work in the field of prebiotic chemistry, with attempts to synthesize possibly homochiral molecular modules (amino-acids, nucleotides, sugars, lipids etc.) integrated in the present biomolecules (such as proteins and nucleic acids) within the postulated astrophysical and planetary context of the emergence of life (abiogenesis research like the Miller-Urey experiment, for example). In fact, such research demonstrated that molecular modules could not only be obtained, but could also react after appropriate activation to produce macromolecules and supramolecular assembly exhibiting similarities with the ones found in living cells.

Another research avenue has been to consider life as a historical dissipative process in which a living cell is an evolving network of interactions and chemical reactions. In this alternative perspective, the final objective is no longer to synthesize the present structure and composition of a living cell per se, but rather to decipher the mechanism behind this evolution: from the initial state of non-living matter to the present level of biological organization. Up until now, most research along these lines has been theoretical. In particular, it has emphasized the significance of thermodynamic and kinetic considerations, bringing forward the concepts of energy dissipation, autocatalysis, replication, symbiosis, fitness, or Darwinian molecular evolution. Despite those theoretical developments, we must admit that we still lack a principled, quantitative, chemically-explicit theory of the requirements needed to stabilize a metabolic network and a self-generated control system that is far from thermodynamic equilibrium. Yet emerging experimental research has benefited from the developments in analysis, imaging, high-throughput screening, microfluidics and other technologies, to yield promising results, while challenging the relevance of theoretical models. 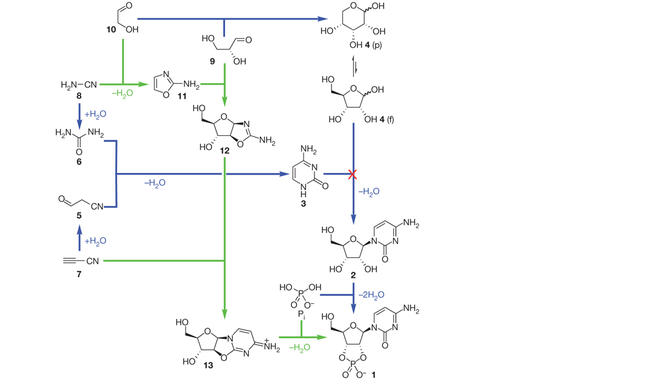 At some stage in the origin of life, an informational polymer must have arisen by purely chemical means. Pictured here: Pyrimidine ribonucleotide assembly options. 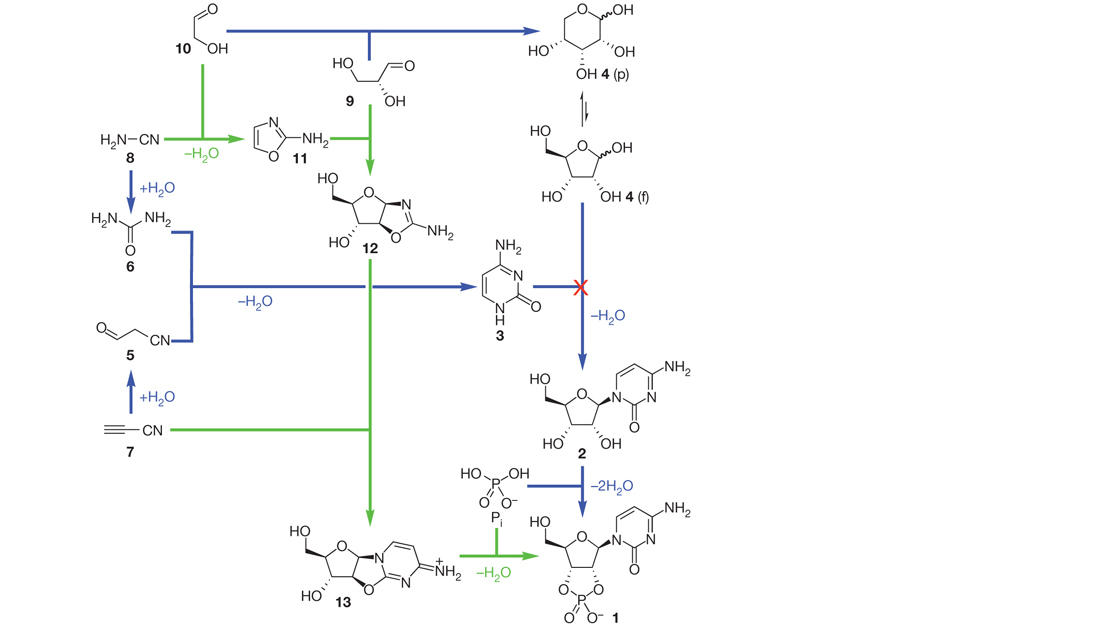 Beyond these considerations, fossils unambiguously expressing the activity of the very first living organisms are still lacking. Moreover, claims that several core metabolic processes (e.g., reductive tricarboxylic acid cycle)1 would already be present when life first emerges remain speculative. We must therefore recognize that the actual nature of the first organisms and the exact circumstances of the emergence of life on Earth are, at least in a large part, not yet directly amenable to a scientific approach. However, this clear limitation does not prevent us from appreciating that life on Earth has been a successful experiment, fully demonstrating what is chemically possible. Hence, more than unraveling the early stages of life, the ultimate challenge may be to construct an artificial “living” organism that could reproduce and evolve. Creating life anew should certainly shed light on how life can start as a general process, how likely its presence is, how diverse it might be in other worlds and, ultimately, “what” life is.

Co-organized by A. Estevez-Torres, F. Guyot, L. Jullien, and R. Plasson, the international colloquium “Why living matter is worth its conceptual and synthetic challenge?” will be held on 10-11 December 2015 in Paris. https://domesticationetfabricationduvivant.wordpress.com

0
Penguins in a Changing ClimatePrevious
Plan B in Outer SpaceNext 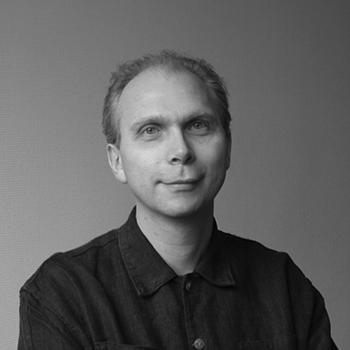 Ludovic Jullien is professor of chemistry at the UPMC and director of the PASTEUR laboratory in the chemistry department of the Ecole Normale Supérieure.