Can we Create Environmentally-Friendly Plastics?

Home / Opinions / Can we Create Environmentally-Friendly Plastics?
0 comment
opinion
-A +A
Matter
Environment

Can we Create Environmentally-Friendly Plastics?

This year, the world will produce 360 million tons of plastics. From their disposal in the environment to implications on human health, this has become a major societal issue. The chemists and polymer scientists Sophie Guillaume and Jean-François Gérard explain how research is trying to find solutions to better recycle plastics and curb their production's environmental footprint.

Discovered in the early 20th century, polymers1 commonly referred to as ‘plastics,’ revolutionized our everyday lives, and, among other things, helped to improve health safety. They developed in pace with both consumption and a rapidly growing post-war economy.

Due to their low cost—and the simplicity with which they can be produced and shaped—they are ubiquitous in all sectors, including packaging, transportation, construction, electrical installation, electronics, textiles, etc. They use 8% of the global production of petroleum (as chemical compounds and energy consumption for their production).

There are many different kinds of plastics. For example, “commodity” plastics, especially synthetic rubber, polyethylene, polypropylene, and others such as PVC, PMMA known as Plexiglas®, polyamides known as Nylon®, polytetrafluorethylene known as Teflon®, poly(p-phenyleneterephtalamide) known as Kevlar®, etc. “Specialty” plastics have more focused applications. Their production is less sizeable, but involves well-defined and controlled—and even high-precision—macromolecular architectures in an effort to achieve optimal properties. They make it possible to combine functionalities (gas barrier, resistance to tearing, and the production of complex forms, such as films that protect food). These polymers, which are more expensive because more difficult to produce, are used in cosmetics as well as in the aeronautics and medical sectors. Thanks to their specific properties in comparison to other materials, some of them are designed for long-term uses—for instance in the automotive sector, in which polymers contribute to lighten vehicles (thereby reducing CO2 emissions and gas consumption)—or for creating coatings with no toxic compounds. Although plastics offer many services, today we must recognize and find solutions for the damage some of them (especially commodity plastics) cause in our ecosystems. 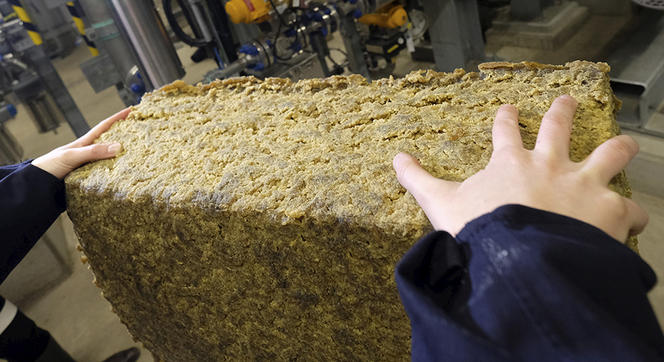 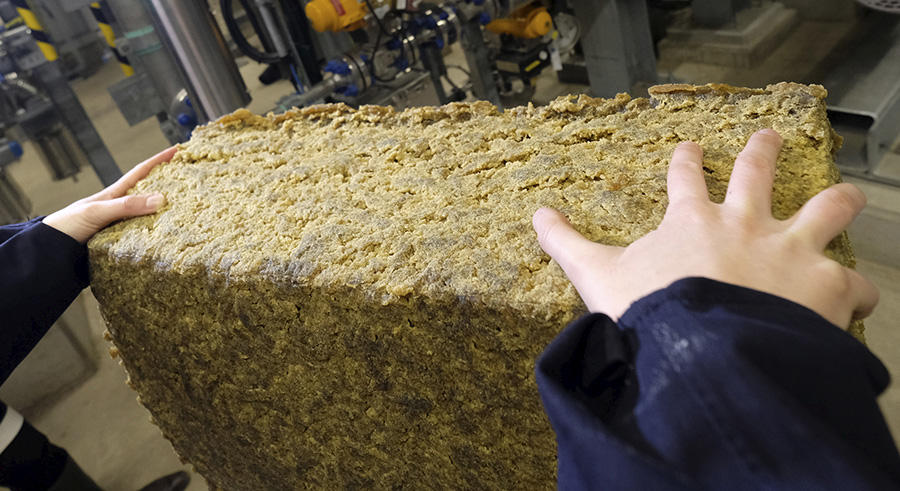 The future of plastics: a global concern

The international scientific community is engaging with the issues arising from growing demand and production of plastic materials: citizens, governments, organizations, and associations are questioning the often very short-term usage for these plastics, as well as what happens to them after. The development and use of “responsible” plastics are increasingly required by institutions, such as the European Community. The French government has set the target of 100% recycled plastics by 2025. In addition to such regulation, the responsibility and environmental engagement of all actors, including both producers and consumers, are opening the way for a new era, in which plastics must be more virtuous, as well as contribute to the well-being of society and the preservation of our planet.

Of the 6.3 billion tons of plastics produced between 1950-2015, only 9% was recycled and 12% incinerated. What happened to the remaining 79% that is still in circulation? A virtuous circle must be put into place to prevent plastics from “leaking” into natural environments (rivers, oceans, dumps, etc.), by optimizing their life cycle as part of a circular, responsible, and sustainable economy. Scientists and industrial actors are exploring innovative solutions in the areas of production, degradation, recycling, reuse, and the repurposing of plastic waste. There are expectations for genuine large-scale breakthroughs, which will not occur without research. 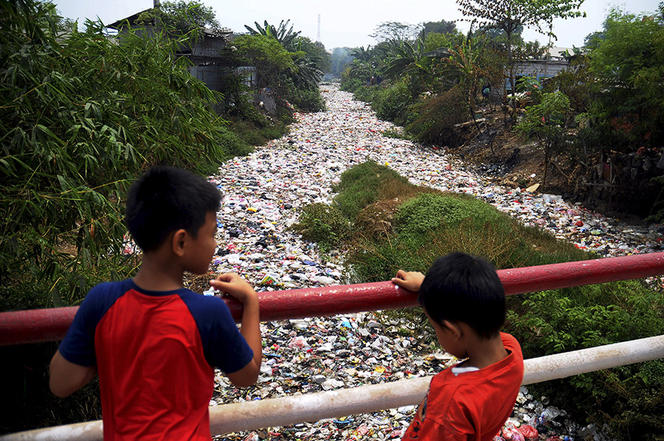 On the Island of Java in September 2019, a river carrying tons of waste over a distance of 500 meters, most of it consisting of plastics. 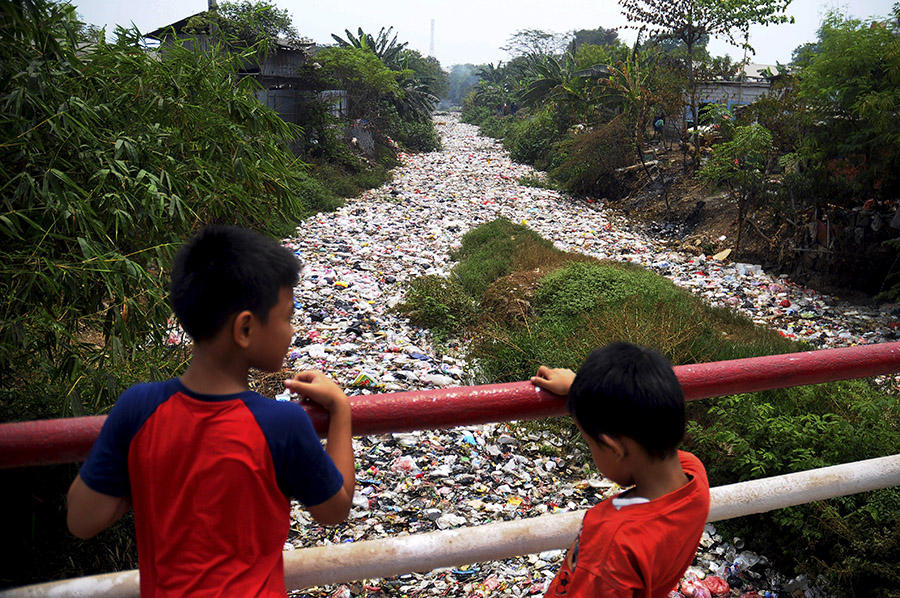 Many research groups are concentrating their research on alternatives, such as the development of new environmentally friendly plastics. Scientists are making major contributions to this interdisciplinary effort within CNRS research groups as well as the Groupe Français d’Etudes et d’Applications des Polymères, acting as the Polymer Division of the French Chemical Society (SCF).

The gathering and sorting of plastic wastes, which is to say its physical recycling, provide an environmentally responsible and friendly solution to the act of simply “throwing away”: numerous local, regional, and national efforts seek to promote the recovery of wastes. This recycling is then optimized on the basis of scientific studies that seek to better separate plastics based on their family through optical, densimetric, or float sorting, in order to better process and reuse them. Another scientific advance in recycling aims to give polymer waste a second life by generating new materials with lower value added, a practice known as “downcycling.” Finally, efforts are being made upstream through the molecular design of “tailored” polymers, which offer optimal recycling properties for pyrolysis or chemical recycling. This involves inserting, along the polymer’s skeleton, functions that are sensitive to an enzyme, UV rays, or heat exposure for example, and that can break the macromolecular chain into small fragments when stimulated, and even into the elementary units of the initial polymer. This approach, which consists of depolymerising polymers by transforming them into their original monomers, represents an economically viable avenue of exploration. These monomers can be recycled through their polymerisation to create a new material that has the same properties as the initial one. Known as “upcycling,” this process is oriented toward industrial applications, for practically all types of petroleum- or bio-based polymers, and offers a perfect illustration of the implementation of a circular economy. 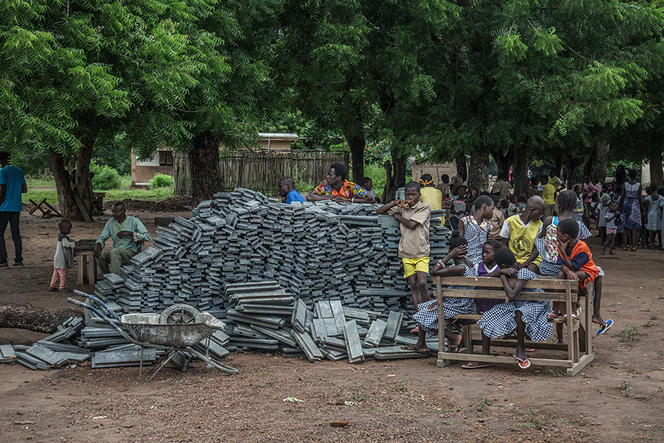 These plastic bricks, which will be used to build a school in Ivory Coast, were made from recycled waste (June 2019). 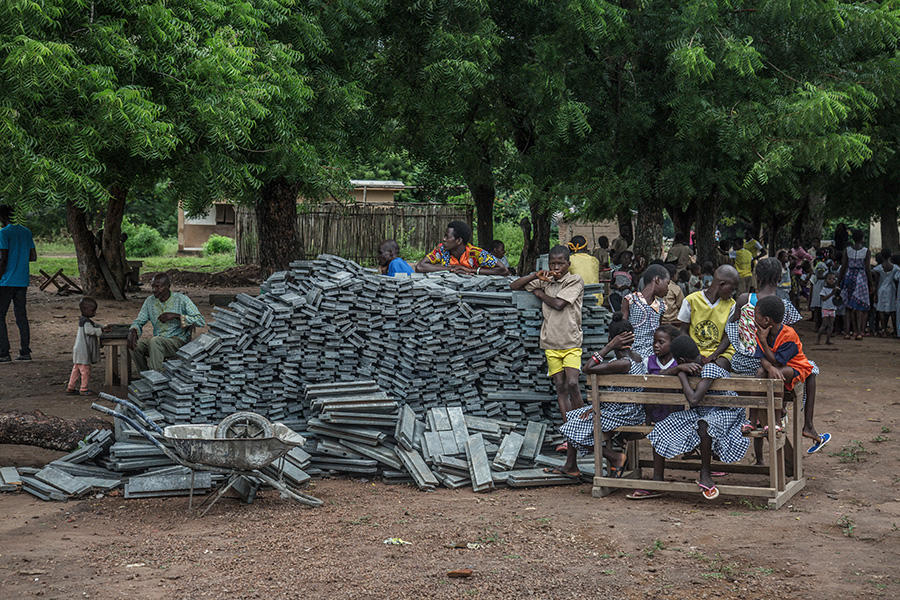 Nevertheless, it is also important to distinguish between a "bioplastic,” which refers to a natural polymer or one produced from renewable natural resources, and a “biodegradable plastic,” which refers to the ability of a material to degrade under the action of natural microorganisms. Not all bio-based plastics are biodegradable, while some petroleum-based polymers are.

For that matter, an upstream study is focusing on the development and production of these plastic materials whose performance at least equals that of similar petroleum-based polymers through the valorisation of biomass, which is to say organic matter from plants, animals, bacteria, and mushrooms, along with renewable, non-edible natural sources. Researchers are increasingly seeking green processes that respect human health and the environment, in order to replace the polymers banned by REACH2 recommendations due to their toxicity. This is the case for polyurethanes, which scientists have succeeded in creating without the undesirable compound of isocyanates. A great deal of research also uses vegetable oils (sunflower oil, castor oil), sugars (glucose, fructose), and even food waste or modified natural polymers3 such as cellulose, casein, or starch, to replace current petroleum-based polymers. These solutions are similar to some developed in the early 20th century to produce objects from galalith, a substitute for ivory or horn made from milk casein. In 1941, Ford presented the Hemp Body Car, a car with a body made entirely of a hemp- and soy-based plastic, reinforced by sisal fibres and wheat straw. Recently, an American physicist created his own car using a 3D printer, largely composed of such plastics.

Mimicking nature as closely as possible, notably with polypeptides (from amino acids: leucine, glycine, cysteine, etc.) or bacterial polymers (polyesters produced by natural micro-organisms such as some microalgae4) makes it possible to propose alternative synthetic polymers that are more competitive than their natural analogues. These polymers can also be innovative, opening the way for new applications due to their bio-compatibility, notably in the packaging and medical fields. Captured CO2, a source of renewable carbon, can also serve as a raw material for creating new polymers such as polycarbonates (used in optical lenses, CD/DVDs).

In polymerisation, catalysis is a major consideration for the effectiveness of chemical transformation reactions in terms of productivity and activity. Efforts seek to replace conventional metallic and sometimes toxic catalytic systems with organic and enzymatic analogues with promising results.

The community of polymerists in France, within organizations such as the CNRS, universities, or in industry, is working toward the continued improvement of synthesis methodologies and production processes by taking the overall life cycle of plastic into consideration. In other words, scientists are considering the biosourced origin of the reactants used up through the development of new functional polymers with improved properties, such as durability and/or recyclability, as well as the processes themselves, which must be fast, cleaner, and less energy intensive. National and international calls for projects on the topic provide support for cutting-edge and highly interdisciplinary research: biochemistry and bioprocesses for the units of interest from biomass, cleaner polymerisation catalysis without heavy metals or the use of organic solvents, design of “reversible” polymers, as well as depolymerisation processes and recycling. No avenues are left unexplored in the effort to create new, environmentally-friendly polymers.