An individual of the pied butterfly bat species (Glauconycteris superba), captured in late 2013 during a scientific expedition to the Democratic Republic of Congo. Here, being held by the naturalist Raphaël Colombo.
ROS KIRI ING
Share
Share
An expedition to the Kisangani region, in the Democratic Republic of Congo, has yielded surprising findings about a supposedly very rare bat species, the pied butterfly bat, whose black fur with white markings is remarkably reminiscent of the panda's.

Since 1939, only five specimens of the species had ever been recorded. From November to December 2013, an international team of nine scientists, including biologists and virologists from the University of Kisangani, the ISYEB,1 and the CEFE,2 together with physicists from the Institut Langevin,3 set off4 to find the pied butterfly bat (Glauconycteris superba). "Of the 1 200 species of bat discovered so far, 250 live in sub-Saharan Africa.  And in the Kisangani region, 52 species have already been recorded. Our ambition was to successfully capture specimens of the pied butterfly bat, otherwise known as the panda bat, whose coloration pattern—black with white patches on its head, back and belly—is unique," explains Alexandre Hassanin, a researcher in evolutionary biology at the ISYEB. There is little data on tropical bats, and their biodiversity remains poorly understood. The expedition is the latest in a series of missions to tropical Africa, one of the researchers' long-term goals being to study the phylogeography (i.e. the levels of geographic patterning of genetic diversity) in several bat species.

Since 1939, only five specimens of the species had ever been recorded.

These acoustic, taxonomic and virological studies have shed fresh light on the biodiversity of bats. And it was during their latest expedition in 2013 in the Kisangani area that the researchers collected their very first data on the panda bat, the results of which were published in December 2016 in the journal Acta Chiropterologica. For a month, the team monitored the elusive little mammals, which "often fly above the canopy, around 30 meters from the ground, making their capture extremely difficult and uncertain," Hassanin points out. 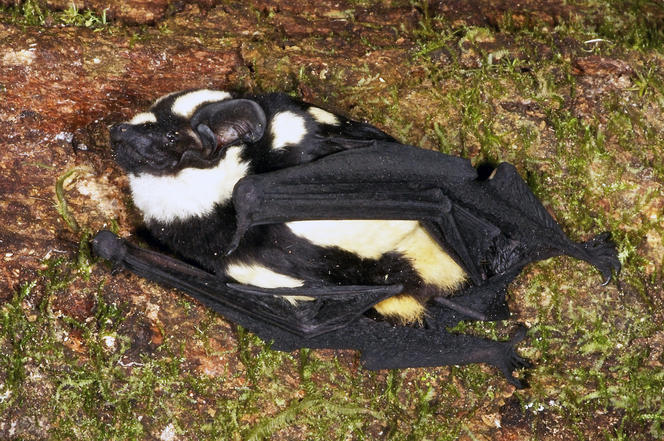 A pied butterfly bat captured on Mbiye island in the middle of the Congo River, a few kilometers from the city of Kisangani (Democratic Republic of Congo). 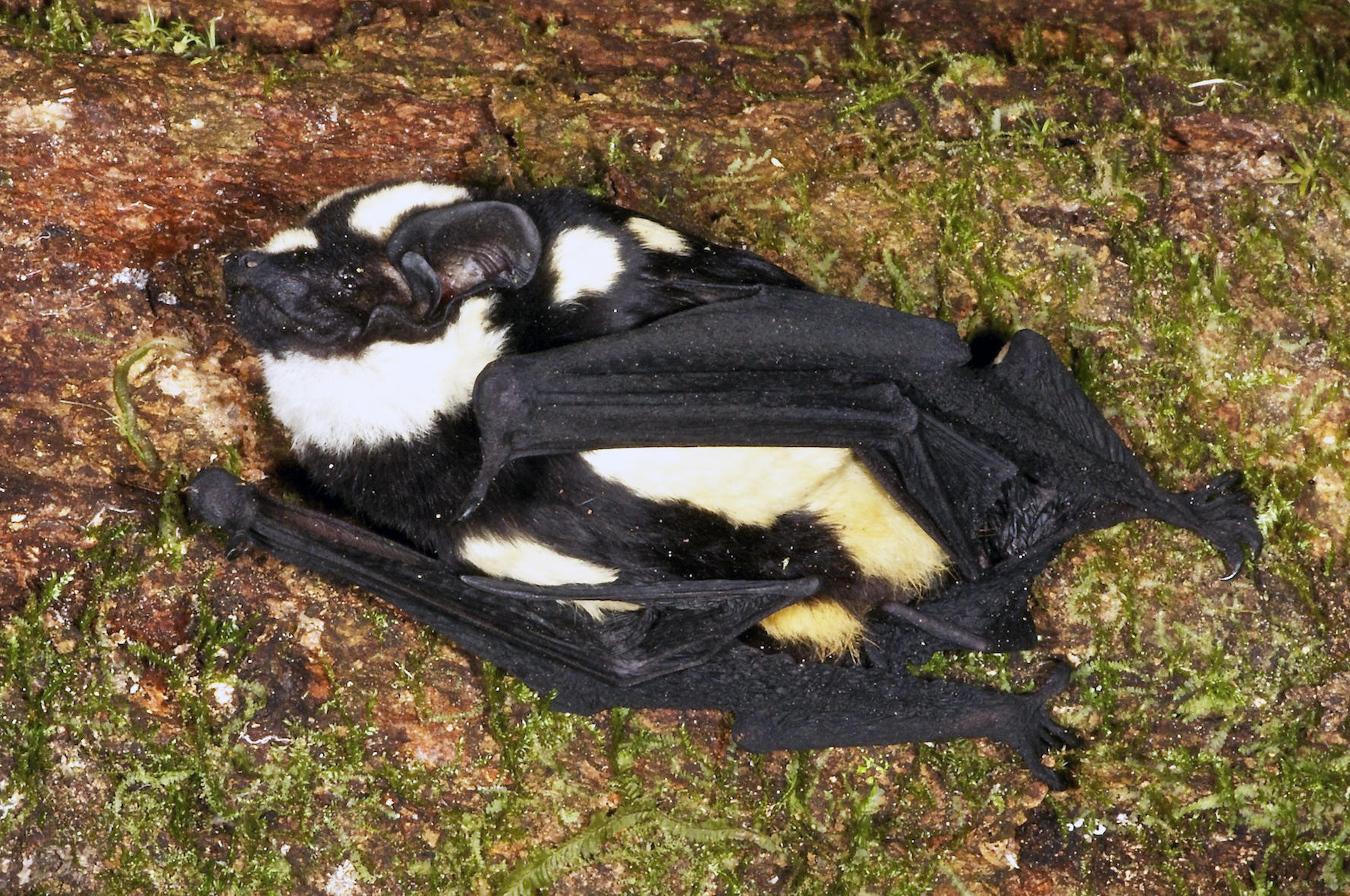 A pied butterfly bat captured on Mbiye island in the middle of the Congo River, a few kilometers from the city of Kisangani (Democratic Republic of Congo).
A. HASSANIN
A. HASSANIN
Share
Share

A more effective way of detecting their presence in the forest (and thus in the longer term of estimating its population size) is to identify their call. Bats emit ultrasounds and each species has its own range of calls. "Once known, these enable us—wherever we are on the ground—to identify a species without seeing it. We therefore tried to determine the acoustic signature of the panda bat," explains Ros Kiri Ing, a physicist at the Institut Langevin in charge of tracking the animals' trajectories in the field in real time.

The team set up a novel acoustic system to detect and record the bat's echolocation calls in three dimensions. The system was made up of four high-frequency microphones to pick up the ultrasounds, a microphone signal amplifier and a camera controlled by a field computer. Rather like an antenna on a tripod, the microphones were arranged in the shape of a pyramid. "Ultrasound waves travel through the air at a speed of 345 meters per second. When a bat calls, the soundwaves it produces are detected by our microphones which, being in different locations, measure these soundwaves at different times," Ing explains.

This light, mobile system enabled the researchers to reconstruct the flight paths and speeds of this small nocturnal mammal, as well as detect possible acoustic variations during its flight, when hunting for example, and take synchronized photographs. "Studying their acoustic signature is non-invasive and non-intrusive: the bat doesn't know that it is being tracked," Ing points out. 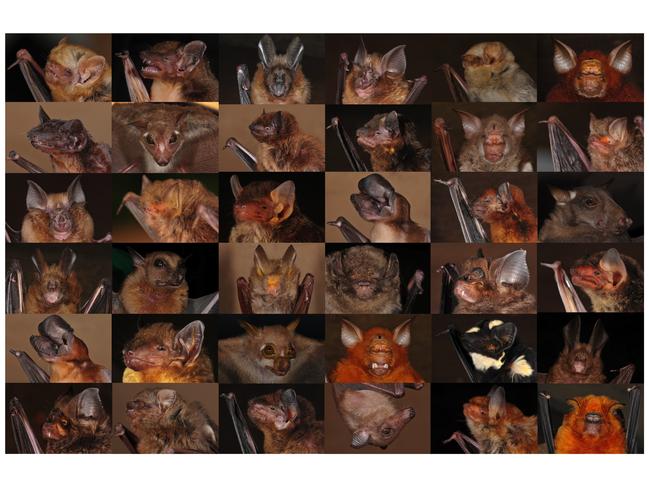 Morphological diversity of bats captured in the Kisangani region. 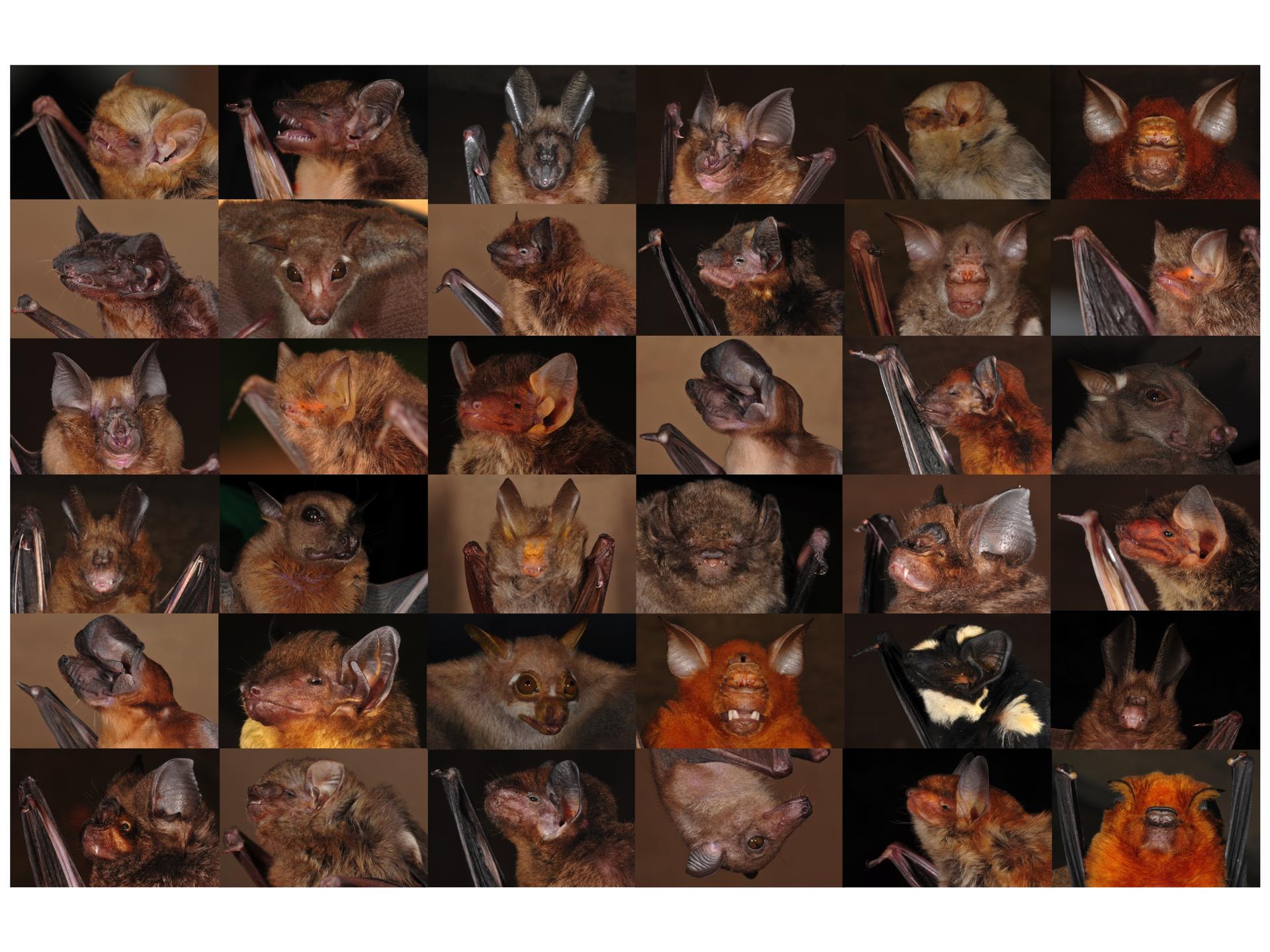 To capture specimens, the researchers placed nets in the flight paths of the bats, while the 3D tracking system was installed less than three meters from the nets to enable their detection. The mission was performed under field conditions. "Captures and releases took place at night, usually between 6 pm and 11 pm, sometimes later. Some were carried out before dawn," Hassanin explains.

Knowing the echolocation signals should make it possible to estimate the size of the population and distribution of the pied butterfly bat. Although the species remains very difficult to observe, its scarcity is probably only apparent. The scientists are also studying the origins of its fur.

While its long wings allow it to fly very fast, "the many white patches on its back, belly and head may well enable it to limit predation in the canopy, particularly when flying over the treetops," Hassanin believes. This is because twilight and moonlight illumination is reflected by the white parts, making the mammal difficult to spot by nocturnal birds of prey, its predators, which have trouble making out the contours of its body.

The expedition enabled the scientists to collect a large amount of acoustic and morphological data about the elusive pied butterfly bat. Moreover, they managed to capture 396 individuals from 43 out of the 52 species recorded in the region—not to mention the two new ones they discovered using morphological and molecular approaches.

The mission to sub-Saharan Africa also led to other findings, especially in virology: four new viruses were identified, as well as the first rearranged mitochondrial genome in the Haemosporidia, a family of blood parasites. In addition, since bats are a reservoir for many viruses such as Ebola and rabies, their role in the maintenance, transmission and evolution of some of them is also being studied. Hassanin's team is working on the role of bats in spreading the Zaire Ebola virus from the forests of Central Africa (Gabon, Congo, Democratic Republic of Congo) to those of West Africa (Guinea), against which a vaccine has recently been shown to be effective.

"This campaign enabled us to collect a great deal of data in a little studied region," says an upbeat Hassanin. "We're now hoping to undertake a new journey to West Africa, this time to Benin."

Slideshow
The Secret in their Eyes
Bat