Home / Articles / This Animal is an Expert in Regeneration

This Animal is an Expert in Regeneration

Home / Articles / This Animal is an Expert in Regeneration

This Animal is an Expert in Regeneration

Ascidians, of which approximately 3,000 species are known, have dotted the ocean for nearly 500 million years. This red sea squirt (Halocynthia papillosa) photographed on the coast of Corsica is a solitary organism.
F. ZUBERER / COM / CNRS Photothèque
Share
Share
Ascidians are strange little marine invertebrates shaped like wineskins that can quickly grow new tissue after suffering serious injury. The biological mechanisms underlying this process have barely been studied, but their investigation may provide precious insights for regenerative medicine.

If an ascidianFermerAscidians are marine organisms that feed by filtering seawater. Their name comes from the Greek askos, meaning “wineskin,” a reference to their shape. Ascidians are thought to be our closest invertebrate relatives. were a cartoon character, it would have to be the X-Men’s Wolverine, who can fast-forward the healing process after being wounded. Indeed, like the Marvel hero, these tiny marine organisms that first appeared about half a billion years ago have fascinating regenerative powers—at least in their colonial form. So much so that after being ravaged by one of their rare predators, or lack of food, their body rebuilds itself in a few days once the danger or scarcity is over. No matter their fascinatingly colorful, symmetric, undulating forms, these invertebrates are not just pretty decorations on the ocean floor: they grab the fancy of biologists who wish to draw inspiration from their amazing properties.

They are fascinating models because they have different ways of rebuilding the same body.

“Research on ascidians could have significant repercussions for regenerative medicine,” says Stefano Tiozzo, who heads one of seven teams at the Developmental Biology Laboratory (LBDV)1 in Villefranche-sur-Mer (southeastern France). Sea squirts, as they are also known, have intrigued the young researcher ever since his doctoral thesis. Though he is modest about the immediate applications of his work, the regeneration biology of ascidians may well become a model for regenerative medicine, which seeks to use our own cells to replace diseased or damaged tissue—rather than transplanting donor organs or tissue, a practice fraught with complications. Already in the late 1990s, ascidians had attracted the attention of immunologists focusing on how our bodies make the distinction between self and non-self—which plays a central role in transplant rejection in humans. 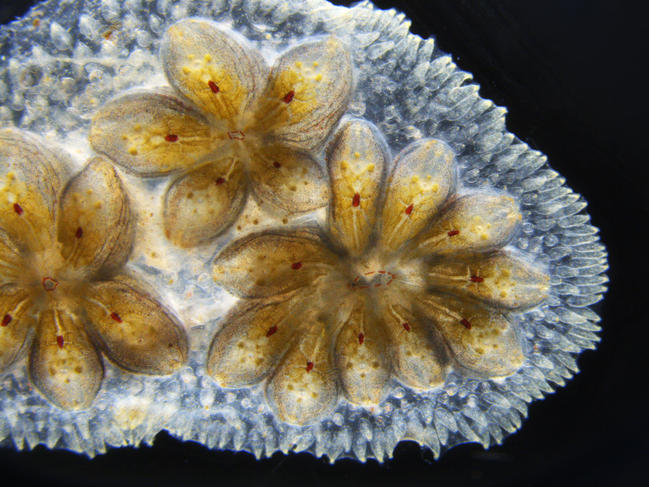 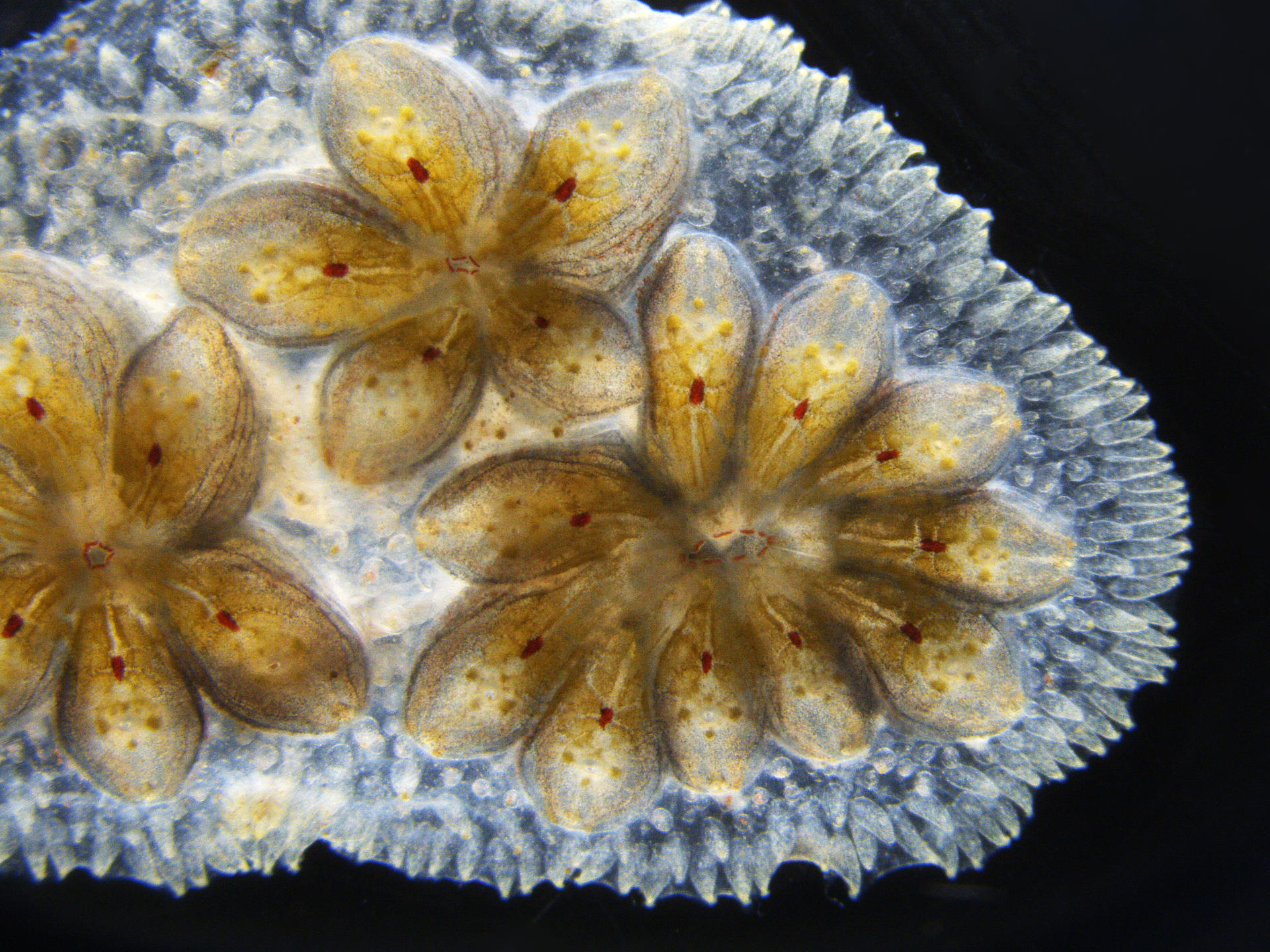 True enough, ascidians are not the only animals able to regenerate: the axolotlFermerThe axolotl (Ambystoma mexicanum) is an aquatic animal. Its name comes from the Nahuatl language and means “water doll” or “water being.” Axolotls mainly live in Mexican volcanic lakes. Their impressive ability to regenerate damaged organs and their smiling faces framed by fern-like gill structures have popularized them. Argentinian author Julio Cortázar dedicated a short story to these creatures. and its relative, the salamander, have been in the limelight much more frequently in the past few years. But ascidians are easier to study in the laboratory and are remarkably diverse, boasting 3,000 recorded species to date. Both these characteristics make them ideal candidates for in-depth study of regeneration. “Above all, they are fascinating models because, unlike many other animals—and vertebrates in particular—colonial ascidians have different ways of rebuilding the same body,” Tiozzo points out. His team hopes to map these different paths of regeneration by focusing on a group of species related to Botryllus schlosseri, the star ascidian, which is prevalent along the Mediterranean coast.

To discover the key to regeneration, the researchers decided to compare ascidians according to lifestyle. “They may be solitary, social or colonial,” explains Tiozzo. Ascidians living as a colony form a close-knit community—literally speaking. “In the colonial form, individuals share a single tunic criss-crossed by a network of blood vessels connecting them to one another. The colony then gradually spreads by budding, with each new individual actually being a copy of the founder of the colony.”

This kind of asexual reproduction—i.e. involving only one individual—is generally associated with “a great capacity for regeneration,” explains the researcher. “Various metazoanFermerMetazoans comprise all multicellular animals. (In contrast, protozoans are unicellular animals.) Their evolution and diversification accelerated during the Cambrian explosion, approximately 500 million years ago. This highly differentiated group comprises more than a million species, including sponges, mammals, and humans. species share this faculty, but not necessarily to this degree.” Both the regenerative power of colonial ascidians—especially star ascidians—and the diversity of its manifestations make them very promising and valuable research subjects. 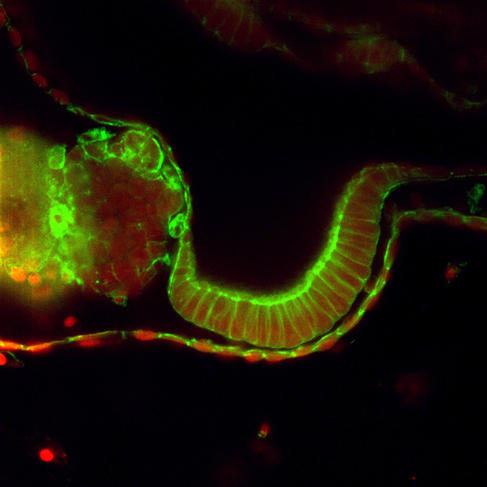 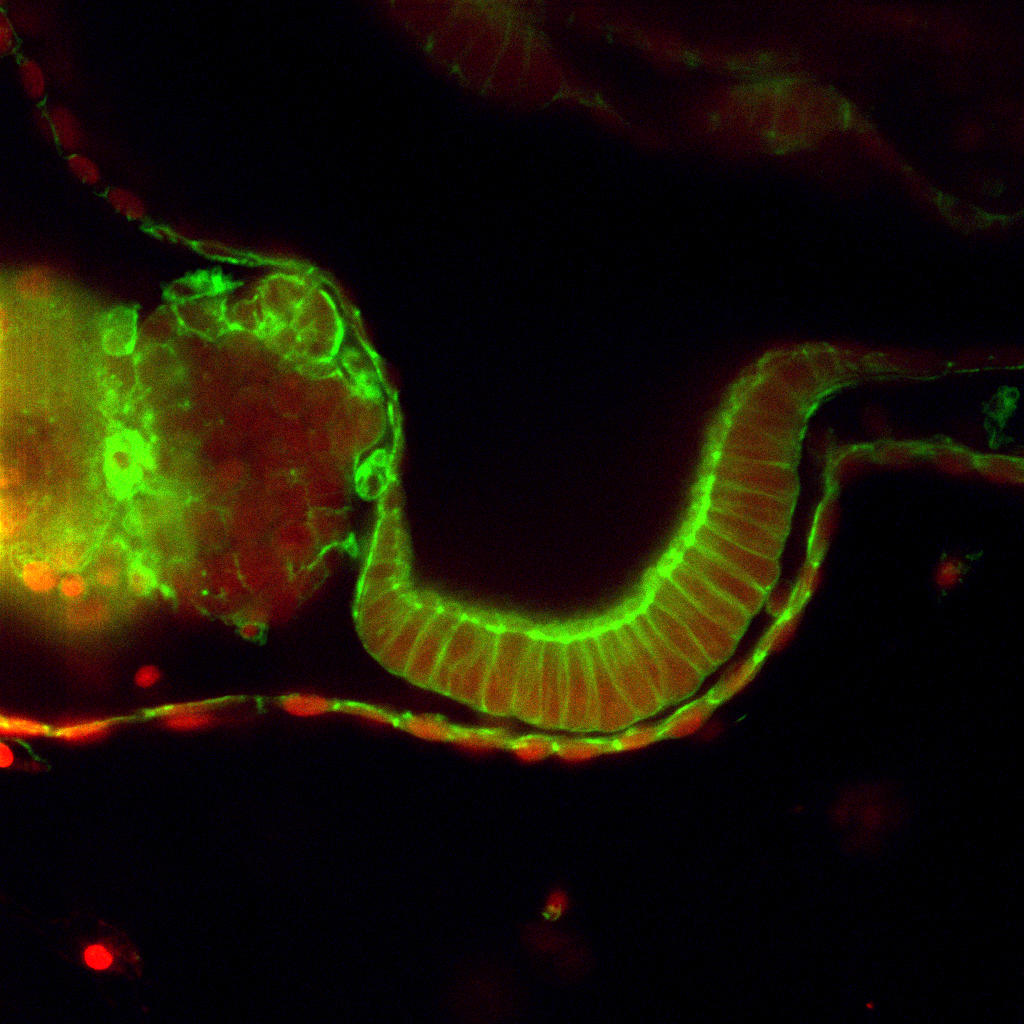 Solving the mystery requires observation of both solitary and social sea squirts: “Solitary ascidians only reproduce sexually,” says Tiozzo. “Their capacity for regeneration is not as developed as that of colonial ascidians.” To study these differences in detail, the researchers rely on modern cellular imaging and molecular biology techniques, including high-throughput sequencingFermerHigh-throughput sequencing is an ultrafast DNA sequencing method that works with large volumes of genetic material. (The Sanger method, in comparison, may be considered “low-throughput” sequencing.) It is frequently used to sequence the genomes of various organisms and to study gene expression or other cellular processes. and transgenicsFermerTransgenics aims to selectively modify the genome of one species by introducing one or more genes from another group, in order to study the effects of this modification on the altered organism.. “Developing these resources is a lot of work, because we’re almost starting from scratch:  these organisms are still barely studied,” explains the scientist, who has identified less than a dozen teams working on the regenerative biology of colonial ascidians worldwide.

Current efforts aim to collect basic data on the star ascidian and related species. This implies genomeFermerA genome is the set of DNA molecules encoding genetic information (as genes) found in the nucleus of eukaryotic cells or throughout the cytoplasm of prokaryotic cells. sequencing, a prerequisite to all investigations in molecular biology.  In addition to B. schlosseri, already sequenced, the Villefranche-sur-Mer laboratory is planning to focus on the genomes of two colonial and one solitary species exhibiting different degrees of regenerative ability while being genetically very similarFermerWhen two species are genetically similar—that is, when their genomes are very similar—they are considered to have closer evolutionary ties. The genomes of humans and chimpanzees, for example, are more than 98% identical.. By aligning their “gene catalogs,” the team thus hopes to find the genetic keys to regeneration. “There are no ‘regeneration genes’ as such, but rather a complex molecular process with multiple sources: genes, regulatory sequencesFermerRegulatory regions of a genome, which contain various elements, other than genes, play a key role in the control of gene expression., epigenetic modificationsFermerEpigenetic modifications are variations in DNA or associated molecules that partly determine how the cell will use the genetic material. Unlike DNA, these variations can change quickly—over the span of the cell cycle—to best meet cellular requirements., and the environment,” adds Tiozzo, whose team is also investigating this sophisticated cellular coordination through measurement and comparison of gene expressionFermerGene expression entails the synthesis of a messenger RNA (mRNA) molecule using the gene's DNA sequence as a template (“transcription”) and then making a protein according to the encoded instructions of the mRNA molecule (“translation”). Thus, the quantity of mRNA molecules for a particular gene at any given moment is a measure of its level of expression. levels under different conditions. This approach has already proved successful in the lab, allowing the researchers to identify networks of star ascidian genes whose function differs depending on the mode of reproduction.

There is no magical regenerative keystone common to all species.

The new experimental tools used with star ascidians and their relatives might also help elucidate the mechanisms underlying the production of stem cells. These protean cells—able to give rise to any other kind of cell, an organ, and even an entire organism—are also involved in ascidian asexual reproduction and regeneration. Tiozzo and his team are busy trying to determine where star ascidian stem cells come from: are they naturally present throughout the organism? Or do they arise from specialized cells that can reprogram themselves?

The answers to these questions may shed light on the evolutionary processes that deprived most animals, including humans, of these incredible abilities. The spectacular healing powers of the cartoon hero Wolverine are the result of a simple genetic mutation, but it would take a lot more to awaken the same traits in humans. “There is no magical regenerative keystone common to all species that only needs reactivating,” Tiozzo stresses. If your dreams of joining the ranks of the X-Men have just been shattered, do not despair. In addition to the promise it holds for the progress of regenerative medicine, this research could help explain certain processes involved in degenerative diseases and ageing—all thanks to these little sea squirts who had managed to avoid the spotlight until now. Still, they didn’t escape the searching gaze of author John Steinbeck, prompting him to pen this thought in his Log from the Sea of Cortez: “I am much more than the sum of my cells and, for all I know, they are much more than the division of me.”

See author's bio
How Should Chess Players Be Rated?Previous
A Prestigious Award for Claude Lorius Next

Video
Physics of the Embryo
Biology

Article
Where the CNRS Was Born

Video
Inside a Termite's Nest