Home / Articles / The Robot Will See you Now

The Robot Will See you Now

The Robot Will See you Now

Axilum's TMS robot is operated by a computer and uses a stereoscopic camera (right) to monitor the slighest movements of the patient's head.
AXILUM ROBOTICS
Share
Share
Winner of the startup contest at the 2016 Innorobo international forum in Paris, Axilum Robotics’ TMS-Robot is a huge step forward in magnetic brain-stimulation procedures, pointing to the promising introduction of robotics in the medical field.

Whether robots, as some technophobes fear, leave human workers jobless in the future or not, one thing is certain: today, they are tackling an ever-increasing variety of complex tasks—sometimes even more successfully than humans. This robotic prowess is demonstrated by the spearhead invention of Axilum Robotics, a Strasbourg-based spinoff launched by the CNRS-partnered ICube1 research laboratory: their TMS-Robot significantly improves on the traditional method for administering TMS (Transcranial Magnetic Stimulation) whose applications notably include treatment of drug-resistant depression and chronic pain. The TMS-Robot’s great potential has been recognized by Innorobo,2 Europe’s major yearly robotics summit, which has singled out Axilum Robotics as one of six startups invited to pitch their products to an Investor Panel during its 2016 event showcasing state-of-the-art technologies and their contributions to our daily lives. 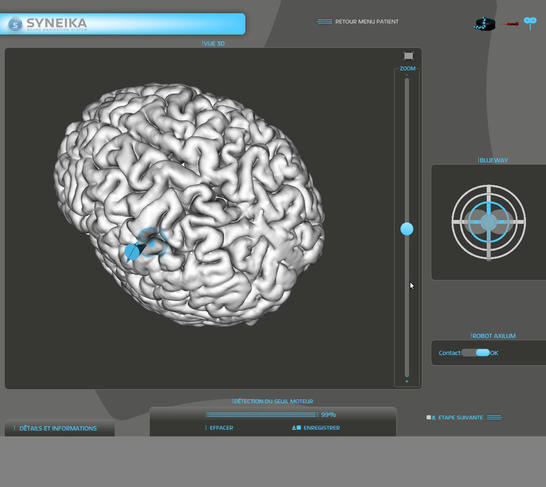 Used in psychiatry to treat depression or schizophrenia, TMS consists in applying magnetic impulsions via a magnetic field generator (coil) placed near the head of the patient to affect specific areas of the brain. 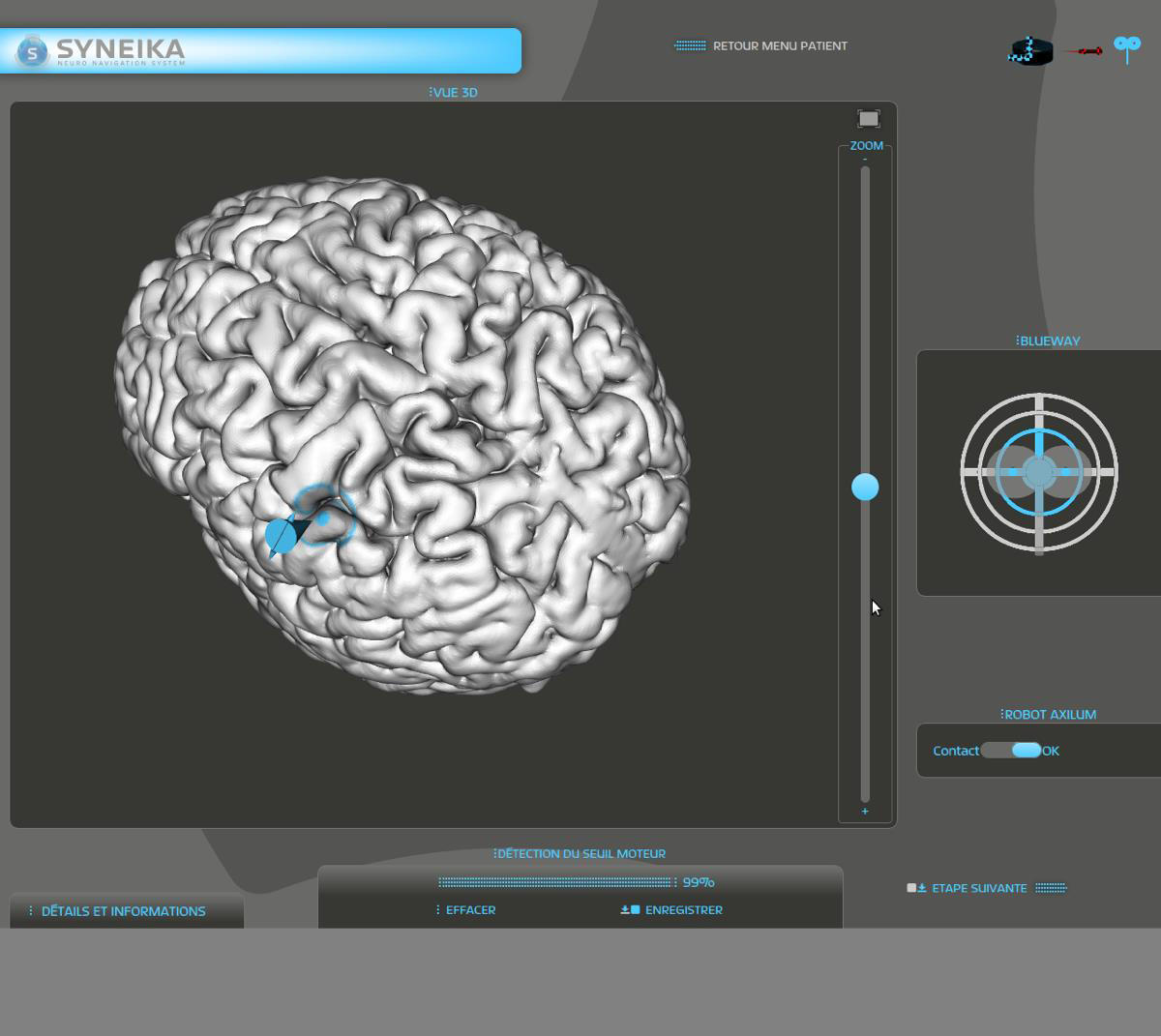 Used in psychiatry to treat depression or schizophrenia, TMS consists in applying magnetic impulsions via a magnetic field generator (coil) placed near the head of the patient to affect specific areas of the brain.
SYNEIKA 2016
SYNEIKA 2016
Share
Share

While the idea of droids standing in for mere mortals has long been the stuff of science fiction, the replacement of human staff by robots is well and truly a reality in many medical and healthcare procedures today. Robotic surgical assistance dates back to the Arthrobot, developed to improve hip reconstructions and first used in 1983 in Vancouver (Canada). More than 30 years on, technology has gone from strength to strength, with robots taking on increasingly diverse and delicate medical procedures. A phenomenon illustrated again on May 7, 2016, by a team in Washington, DC whose STAR (Smart Tissue Autonomous Robot) device—a computer-controlled robotic arm fitted with a suturing tool—sewed back together severed piglet intestines under only light human supervision—achieving more evenly spaced and leak-proof stitches than most surgeons to boot. This feat highlights robotic ability to outperform humans thanks to steadier, more precise movements resulting in less invasive operations—a valuable advance indeed.

Robotic surgical assistance dates back to the Arthrobot, developed to improve hip reconstructions and first used in 1983.

This incredible potential use of robotics in the medical and healthcare fields is reflected by Innorobo 2016’s numerous developers of technologies in this domain. Among them, Open Bionics' 3D-printed prosthetics for amputees are not only lightweight and affordable but also fashion items. Another participant is RoboCARE Lab, whose Presence+ robots cater to the social developmental needs of autistic children, or alternatively monitor and mentally stimulate the elderly. Meanwhile, Kuka’s robotic diagnosis, surgery and rehabilitation aids include a system for boosting motor skill recovery in stroke victims.

And then of course, there is Axilum Robotics, whose TMS-Robot automates and vastly improves on the traditional method for administering Transcranial Magnetic Stimulation. TMS is a technique first explored in the 1980s whereby a coil—a magnetic field generator—is placed near a person’s head to stimulate brain nerve cells via small electric currents. Painless and non-invasive, TMS has a dual function, explains Michel Berg, CEO of Axilum Robotics: “This neuroscience research tool helps us further understand cognitive mechanisms, but it is also used therapeutically for drug-resistant psychiatric or neurological diseases.” Although results obtained from therapeutic use of TMS vary for a range of conditions including schizophrenia and Parkinson’s disease, evidence supports its effectiveness in providing relief for severe depression and chronic neuropathic pain. Berg notes that “since 2012, TMS has been covered by Medicare in the US for treating serious depression.” 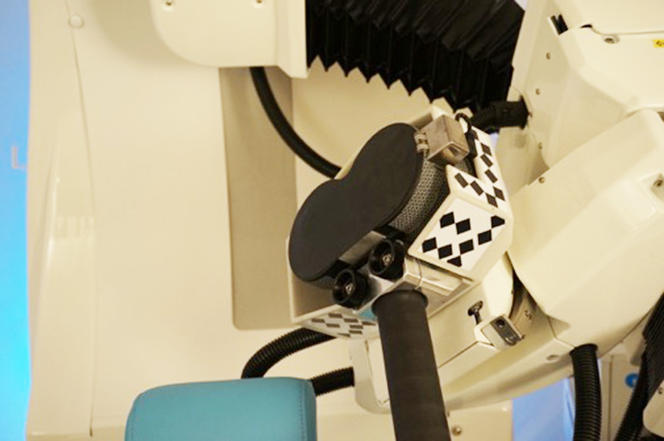 Close-up of the TMS robot's magnetic field generator, or "coil." Until now, TMS sessions had to be performed manually, which is difficult due to the weight of the device (3-4 kg), and repetiveness of the procedure. 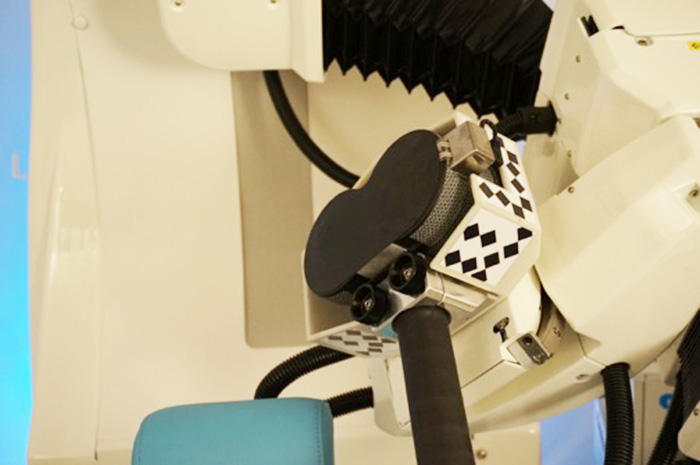 Close-up of the TMS robot's magnetic field generator, or "coil." Until now, TMS sessions had to be performed manually, which is difficult due to the weight of the device (3-4 kg), and repetiveness of the procedure.
AXILUM ROBOTICS
AXILUM ROBOTICS
Share
Share

Until now, TMS has been administered manually by an operator holding the coil next to the skull of the patient, naturally prone to head movements. Not only is this technique physically tiring for operators, but it also lacks the extreme precision required for optimal effects when targeting a specific area of the brain over 30-minute sessions, sometimes for up to 30 identical sessions. Alerted on these shortcomings by psychiatrist and neurologist Jack Foucher, a TMS pioneer in France, ICube director Michel de Mathelin led a group from the lab’s Control, Vision and Robotics team on a search for a user-friendlier solution in 2004. Recalling the ICube team’s “desire to see a lab invention treat persons in real-life circumstances,” de Mathelin defines their challenge as “creating an original mechanical structure that is safe for use in patients.” The robot, born in 2010, lived up to the team’s objectives. “Improvements were made on the procedure’s reliability, accuracy and repeatability,” notes Berg. “And staff freed from a repetitive task can use their time elsewhere.” Because once stimulation targets are entered into its system, the device takes over: consisting of a robotic arm and an ergonomic computer-controlled patient seat, TMS-Robot positions the coil against the patient’s head according to the targets. Monitored by force sensors, the coil re-adjusts throughout the session to maintain permanent contact with the patient’s head and compensate for movements. 3D optical tracking enables monitoring of the automated procedure.

Axilum Robotics was set up in 2011 to further develop ICube’s functional prototype and bring a medical device to market. With systems already sold to institutions in France, Canada, Brazil, Indonesia, Denmark and Spain, the spinoff has its sights set on further international development. In the meantime, it presented its project to the 2016 Innorobo Investor Panel. Berg describes this as “a wonderful opportunity to enhance the program's visibility and potentially find funding, which will come in handy to obtain licensing in the US, and also expand the range by creating a more affordable, simplified TMS solution,” the CEO concludes.

Article
Pasteur beyond the legend
Medicine