The Equivalence Principle Confirmed in Space

The Equivalence Principle Confirmed in Space

Artist's impression of the Microscope microsatellite, placed in orbit in April 2016 to test the universality of free fall, also known as the equivalence principle.
CNES/Virtual-IT, 2017
Share
Share
The first results of the Microscope experiment have just been unveiled. Its objective is to test the equivalence principle, which states that in a vacuum, all bodies fall with the same speed. Explanations with Gilles Métris, co-principal investigator of the mission.

The first results of the Microscope experiment have just been published. What are they and what is the objective of this experiment which involves several CNRS teams?
Gilles Métris:1 The objective of Microscope is to test the equivalence principle, also known as the universality of free fall, according to which all bodies fall in the same way in a gravitational field, in other words with the same acceleration. Yet after analyzing the data from the first series of measurements, we have concluded that the equivalence principle is valid up to 14 digits after the decimal point. Hence we have improved by a factor of 20 the precision of the best measurements to date, which were made by the Eöt-Wash group of US physicists in 2012.

What is the principle of Microscope?
G. M.: In a word, testing the equivalence principle involves comparing how masses with different compositions fall in a gravitational field. The first experiments of this type go back to Galileo. Following his lead, Isaac Newton used pendulums of the same length with balls made of different materials to verify that they swung at the same rate, with an approximate accuracy of 10-3. Then in 1889, Loránd Eötvös used torsion balances to conduct a measurement with eight significant digits. The 2012 record was established by refining this same experimental technique.

With Microscope, we are returning to the principle of the original trials, which is to say free fall. Yet unlike Galileo's thought experiment, which was "conducted" from the top of the Tower of Pisa, we placed our masses inside a satellite orbiting the Earth at an altitude of 700 kilometers. In this way they can be in permanent free fall far from surface disturbances.

More specifically, we used two hollow concentric cylinders—an internal cylinder made of platinum with a mass of 400 grams, and an external cylinder made of titanium with a mass of 300 grams—in a zero gravity enclosure, like an astronaut in the International Space Station. An electrostatic system keeps these two masses perfectly immobile in relation to one another; the key is to measure and compare the forces required to keep each mass static. Insofar as all other disturbances are controlled, a difference would represent a violation of the equivalence principle.

Why is it important to test the equivalence principle?
G. M.: In Newton's formalism, this principle conveys the identity of gravitational mass, which determines a body's sensitivity to the attraction of a gravitational field, and inert mass, which defines the degree of a body's resistance to a change in its movement. In principle, there is no reason for them to coincide; however, the equivalence principle is a foundational part of the theory of general relativity devised by Einstein in 1915, which led to gravitation being considered not as a force exerted from one object to another, but as a phenomenon connected to the deformation of the very structure of space-time. 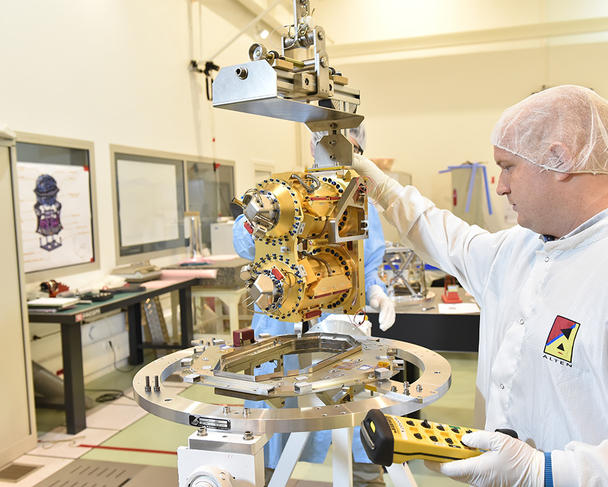 Payload integration for the Microscope satellite. 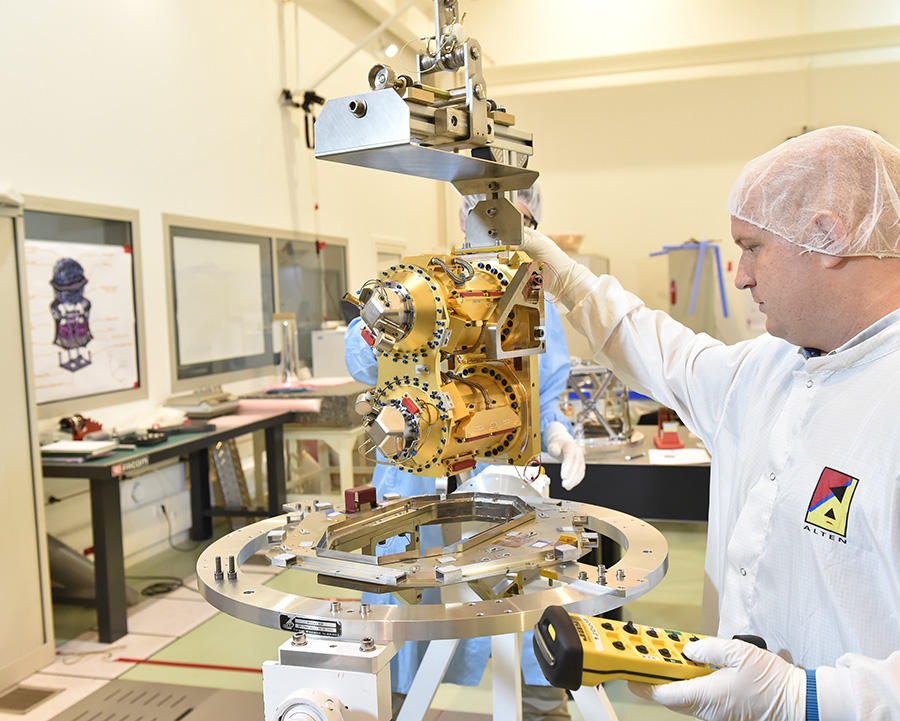 While general relativity has been confirmed in ample detail, why is there an expectation of a possible challenge to the equivalence principle?
G. M.: Although general relativity works very well, it cannot constitute a definitive theory. As it happens, it does not integrate the rules of quantum mechanics, unlike conjectures that describe the three other interactions—electromagnetism, and weak and strong nuclear forces.

As a result, theorists have been working for decades to develop a shared framework to unify the four fundamental interactions. Yet numerous candidate hypotheses for this unification predict the existence of new fields, one of whose manifestations would be a violation of the equivalence principle. The observation of such a violation would moreover be one of the simplest and least costly ways of putting these theories to the test.

Except that Microscope has just shown that the equivalence principle continues to resist...
G. M.: According to theoreticians, a violation was not expected on the level of precision explored before Microscope. The purpose of this experiment is that for the first time, it makes it possible to explore domains where the equivalence principle could cease to apply, without there being strong theoretical predictions that this should occur. It is also worth noting that the recently published results are based only on the very first series of measurements.

What is the next step of the experiment?
G. M.: Microscope was put into orbit in April 2016. Since then, it has conducted approximately 10 series of measurements of eight days each. Upon completion of the mission, which is scheduled for spring 2018, we should have about ten additional series, or approximately twenty in total. Collectively, they will increase precision by a factor of ten to reach 15 significant digits. Eventually, we will be limited by the autonomy of the gas micro-propulsion system that very finely controls the movement of the satellite.

What results do you expect?
G. M.: It is impossible to say, in that no prediction has indicated the level of precision at which a deviation from the equivalence principle would start to be observed. If this were the case with Microscope, the next objective would naturally be to confirm it through an independent measurement. However, in the event of a negative result, new and even more precise experiments will be required. In 2018, the European Space Agency will decide whether to give a green light for the Stequest experiment, which aims to study the free fall of atoms in space. The US experiment Step, on the other hand, aims to reach a precision of 18 digits after the decimal point, using three masses kept at cryogenic temperature. Meanwhile, the equivalence principle continues to resist after 400 years!

Article
First-ever physical model consistent with the history of the...
Physics

Article
Is ventilation the ultimate weapon against Covid-19?
Experiment