Stretching the Boundaries of Bio-elasticity

Stretching the Boundaries of Bio-elasticity

Pinch your skin and watch how quickly it recovers its original form. If it happens instantaneously, one can safely guess that you are young. If it takes a bit longer, you are probably middle-aged or older… This is perfectly normal: the regeneration of the body’s elastic fibers slows down over time. After the age of 20, our “elastic capital” is gradually depleted. What is less well known is that these elastic fibers are present everywhere in the body and are in fact indispensable for a wide range of functions, including respiration and nutrition. In addition, their depletion can be the cause or an aggravating factor for an impressive range of pathologies, from heart failure to aneurysmal rupture, loss of voice and blindness. And yet, researchers are just beginning to plumb the mysteries of these fibers made up of more than 30 different proteins (elastin, fibrillin, fibulin, lysyl oxidase…) with a view  to developing mechanisms to protect—or even replace them.

Pascal Sommer, a biologist at the Institute of Movement Sciences,1 is one of a handful of French researchers who are investigating the properties of elastin, one of the key proteins in elastic fibers.

The complex role of this protein, and its variable assembly from some 20 amino acids, were revealed in 1998. “Mice whose elastin gene was deactivated died at birth of an unexpected cause: a cellular hyperproliferation that led, most notably, to heart failure,” Sommer explains. “This means that the elastic environment of tissues modifies cell functions via epigenetic mechanisms.”

Later, the researcher and his team carried out the first biomechanical studies of human skin elasticity, focusing on rare diseases of the elastic tissues like cutis laxa. This “premature ageing” syndrome affects children, whose skin elasticity at 18 is the same as that of an 80-year-old. The team is also looking into possible therapeutic approaches. Back in 2004, their work led to the filing of a preliminary CNRS-BASF patent for a dill extract with the potential to partially restore the elasticity of the skin and other tissues.

The study of elasticity has also resulted in the development of artificial skin. As part of the DHERMIC project, Romain Debret of the LBTI2 has produced an elastin analogue using genetic engineering: a synthetic gene encoding for the analogue is inserted into E. coli bacteria, which are mass-cultured, harvested and ground to extract the protein—a real challenge, given the difficulties of reproducing this complex molecule.

The LBTI is one of only four laboratories in the world to hold patents in this field. Debret’s team has evaluated the injection of this synthetic elastic protein into the arteries of zebrafish. “We have shown that it diffuses well and adheres as expected to the vascular walls,” the biologist recounts. “Now we are working to characterize its ability to improve the elasticity of blood vessels.”

“Gluing” the edges of a wound in seconds

This elastin analogue could also be used to develop more elastic biomaterials, such as bio-inks for 3D printing. For example, a project entitled Nasaltis is testing 3D-printed polymers that imitate the cartilage of the nose. The goal is to improve the elasticity of the prostheses used in rhinoplasty, since the printable biomaterials in biomedicine are currently too rigid. Cardiovascular diseases are another key target for this research. Blood vessels have a natural capacity to dilate and contract in order to facilitate blood circulation, powered by the heartbeat. This elasticity is still lacking in today’s vascular prostheses, whose effectiveness and durability are limited by the use of relatively rigid materials.

Didier Letourneur, a senior researcher at the Laboratory for Vascular Translational Science (LVTS)3 is looking into the issue: “It’s a very complicated equation, because elasticity is only one of the factors involved in the design of materials for vascular prostheses. We also have to consider their biocompatibility with the organism and with blood, their mechanical resistance, etc., which explains why the development process takes such a long time.” In 2014, this world-renowned specialist and his team, in cooperation with Ludwik Leibler’s group at the MMC,4 developed a revolutionary “bioglue.”

To make it adhere to human tissues, including “soft” organs like the liver or heart, the researchers used nanoparticles dispersed in an aqueous solution, which bind with the tissue’s molecular network (via adsorption) while the gel forms a bond among the particles themselves. As a result, this bioglue can be used to close a wound on an organ in a few seconds, providing high-quality healing. 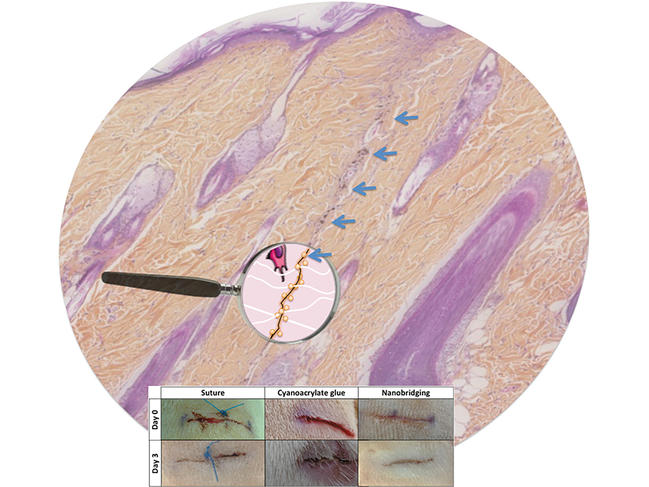 The bioglue developed by D. Letourneur and L. Leibler can close a wound in a matter of seconds. After three days, this nanoparticle bandage produces esthetically superior results compared with conventional sutures or cyanoacrylate adhesives (see bottom right, click to zoom). 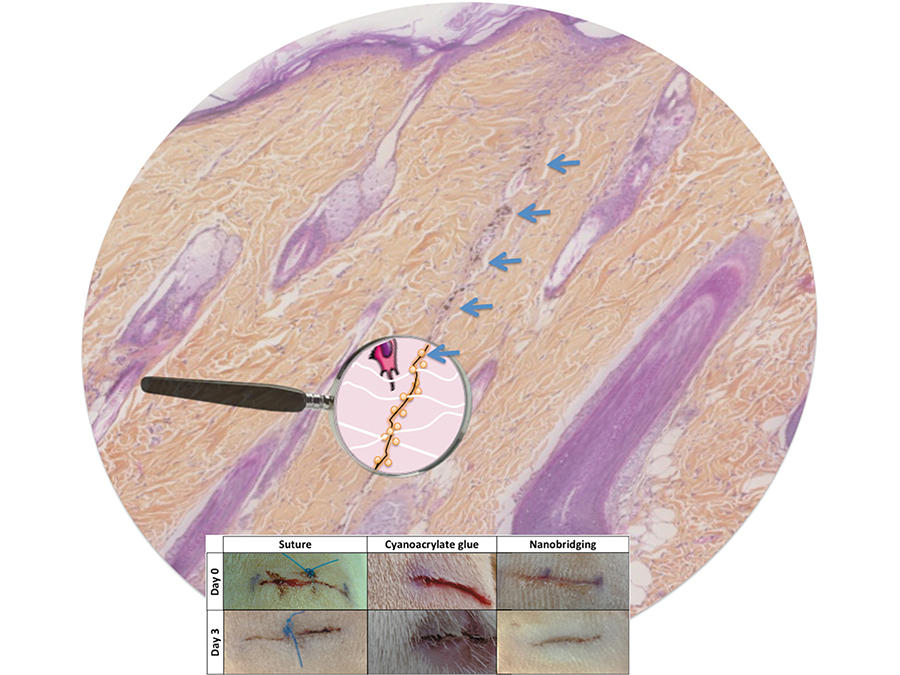 Meanwhile, Lucie Bailly and her colleagues at the 3SR5 laboratory are exploring the mysteries of the vocal folds (the scientific name for the vocal cords), whose elastic properties enable us to speak. Under the effect of air pushed up from the lungs through the trachea, the vocal folds change shape and produce periodic vibrations that modulate the frequencies of the voice. “How these self-oscillating movements are formed and adjusted to produce the desired sound remains a mystery, as the microstructural and biomechanical properties of the vocal tissue are still poorly known,” Bailly explains. Yet she is determined to unlock the secret: in collaboration with other partners of the Grenoble-based site,6 3SR recently collected promising data on the microscopic composition of the vocal fold and the 3D configuration of its fiber networks using high-resolution images obtained by synchrotron X-ray microtomography.7

Ultimately, these projects will improve understanding of vocal pathologies characterized by a change in the fold’s microstructure (polyps, nodules, cancers, etc.). The laboratory is also working on the development of biocompatible self-oscillating fibrous materials, here again using the elastic protein synthesized by Debret’s group. “In the case of deep surgery, the long-term restoration of a patient’s phonation capacity remains a challenge, whether with injected biomaterials or with artificial implants mimicking the vibrations of the vocal folds,” Bailly notes. 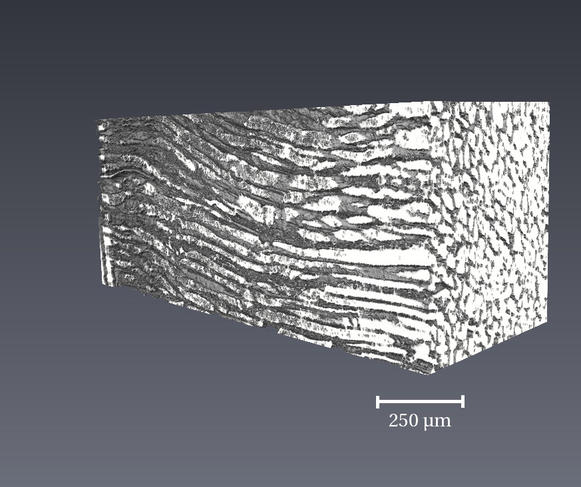 A 3D visualization of a network of collagen, elastic and muscle fibers in a human vocal fold (vocal chord) obtained by high-resolution X-ray microtomography. 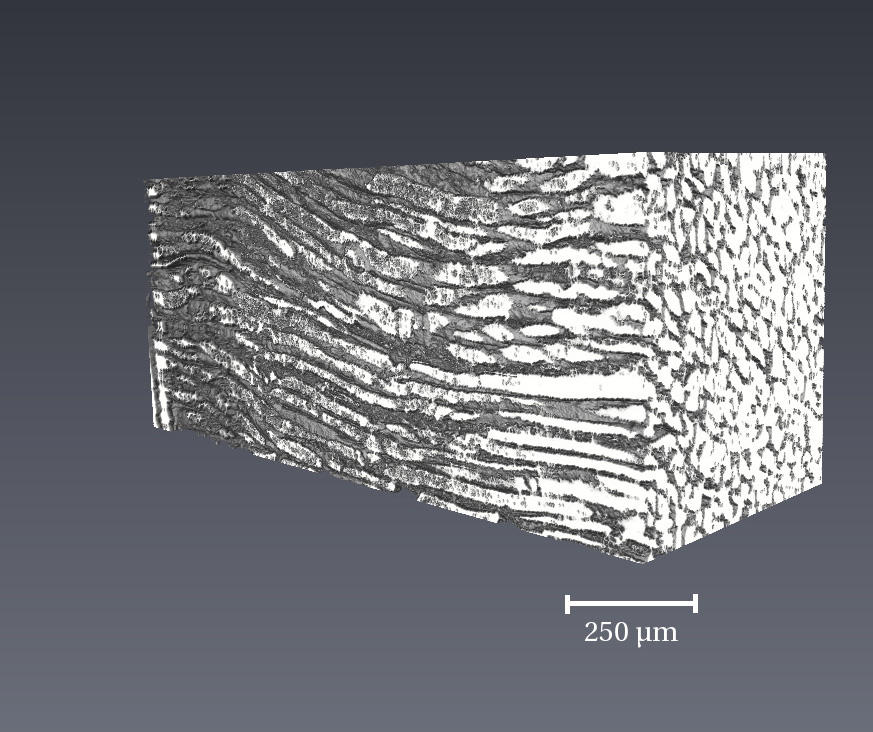 The body’s elastic properties can be truly surprising and turn out to be essential in the least expected places—such as in our bones! Or rather in the “skin” that covers them: this soft, vascularized tissue, called the periosteum, plays a role in the regeneration of fractures by facilitating the transfer of repair cells to the damaged area.

This method could facilitate the regeneration of important fractures, as well as bone consolidation after certain procedures.

The biomechanics experts in Martine Pithioux’s team at the Institute of Movement Sciences are attempting to reproduce this membrane in order to improve the healing of fractures. They have developed a proof-of-concept showing the impressive regenerating capacities of the periosteum, even in critical situations like the regeneration of large masses of bone tissue. A study now in progress, based on elastin hydrogels that were originally developed for artificial skin, is testing the effectiveness of this type of substitute on femur fractures in rats, with a view to potential applications in humans. “In the future, this method could facilitate the regeneration of important fractures, as well as bone consolidation after limb-lengthening procedures used to correct leg length discrepancy, for example,” Pithioux explains. 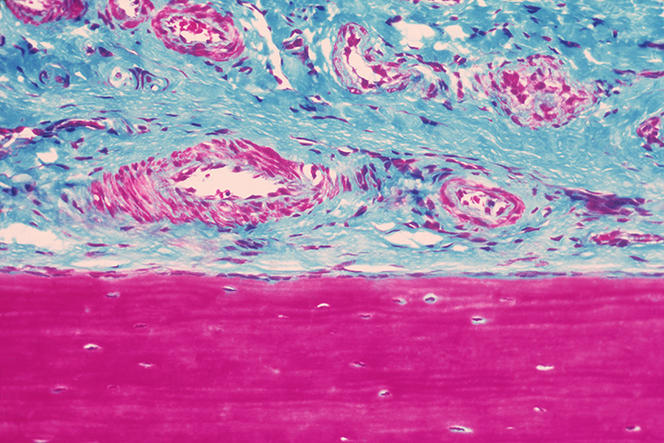 This cross-section shows the different layers of the periosteum, a vascularized soft membrane that covers certain bones. Martine Pithioux’s team is working to create a substitute for this precious tissue, which plays a key role in bone regeneration, in particular in the case of fractures. 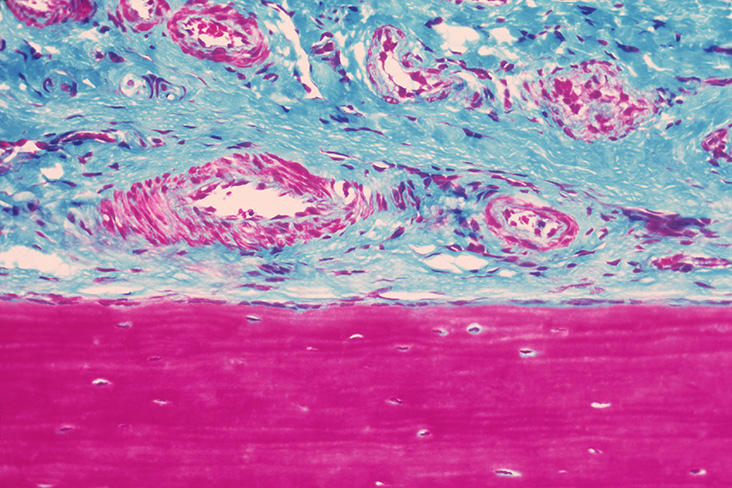 Aphonia, fractures, cardiovascular diseases… This variety of applications seems all the more promising as research in the “elastic human body” is still in its infancy. As Sommer points out, “It has only taken off with the recent appearance of new concepts and tools.” The mechanisms by which elastic fibers are assembled from elastin were not fully characterized until 1998. “Until now, the properties of elasticity were modeled mostly in relation to collagen fibers, the family of proteins that give tissues their rigidity,” Pithioux adds. “It took time for biologists’ knowledge of the elastic fibers themselves to be adopted in other fields of research like biomechanics.”

Until relatively recently, there was no effective method for measuring the elasticity of organs and tissues. French research, at the cutting edge of ultrasound technology, helped resolve this problem with the development of new ultrafast imaging techniques in the early 2000s.

“Traditional ultrasonographs only used compressional waves, in other words the primary waves generated by successive dilations and compressions of the medium in the direction of wave propagation,” explains Jean-François Aubry, a senior researcher at the Institut Langevin.8 “But the elastic properties of tissues are related to another type of wave, called shear waves, for which the movements of the medium are perpendicular to the direction of wave propagation. Just as ultrafast cameras can reveal astonishing details invisible to the naked eye, the new ultrafast ultrasound techniques now make it possible to record an acoustic image of shear wave propagation and thus determine the elastic properties of tissues.” The French company Supersonic Imagine, deploying technology based on no fewer than 14 CNRS patents, has become the world leader in these techniques. 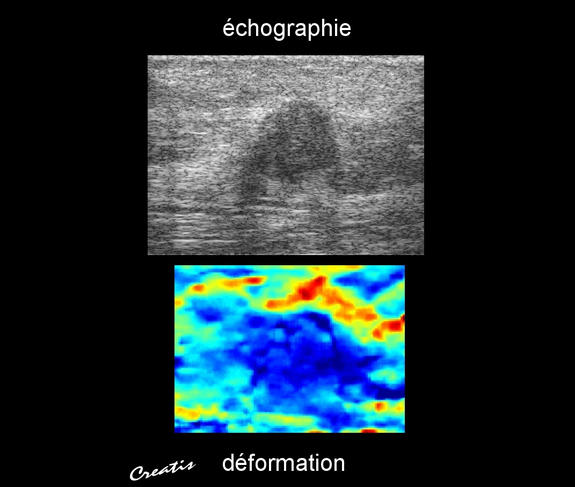 Since modifications in the elasticity of biological tissues are often linked to pathologies, the ability to measure this property provides valuable diagnostic information. In this example, 2D ultrasound elastography is used to screen for breast cancer. 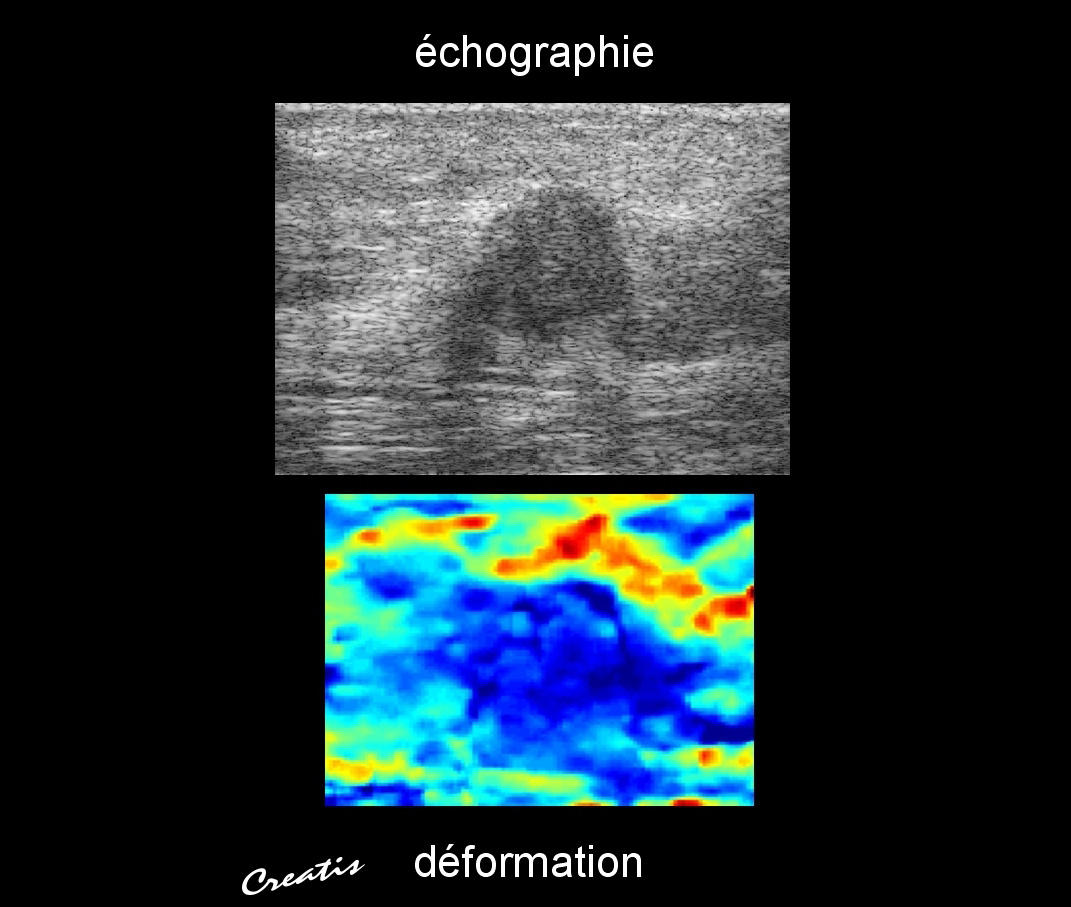 Since modifications in the elasticity of biological tissues are often linked to pathologies, the ability to measure this property provides valuable diagnostic information. In this example, 2D ultrasound elastography is used to screen for breast cancer.
Élisabeth BRUSSEAU/Valérie DETTI/CNRS Photothèque
Élisabeth BRUSSEAU/Valérie DETTI/CNRS Photothèque
Share
Share

But the most recent developments go beyond the realm of measurement, making it possible to modify the elastic properties of tissues. Non-intrusive surgical techniques using high-intensity focused ultrasound can actually “burn” diseased tissue inside an organ with extreme precision. Applications for these techniques could include healing the brain regions responsible for essential tremor, a debilitating form of tremor that resembles the symptoms of Parkinson’s disease.

As in any new field of research, many  obstacles remain to overcome before fresh light can be shed on elasticity and how to treat the related pathologies. The mechanisms involved depend on subtle physico-chemical phenomena at the molecular or inter-molecular level, and can be studied at various scales. Consequently, the mathematical models of elasticity developed by physicists and mechanical engineers are difficult to apply to the living organism. “The question is to determine the most pertinent scale for studying these properties—molecular, cellular or macroscopic—in order to choose the right mathematical models,” says Yves Rémond, deputy scientific director of the CNRS Institute for Engineering and Systems Sciences (INSIS). Progress will depend on interaction between biologists, physicists and biomechanics experts, a multidisciplinary approach that Rémond and Sommer are set to implement: at a recent conference on the “elastic human” at the CNRS Paris headquarters, the two scientists announced the upcoming formation of an International Bioelasticity Society. No doubt this research field  holds many promises.

Article
Pasteur beyond the legend
bioengineering

Slideshow
Microalgae: a Revolution in the Making