From Phantom Limb to Bionic Arm

From Phantom Limb to Bionic Arm

N. Jarrassé 2017
Share
Share
French scientists and doctors have used the peculiar phenomenon of the “phantom limb”—a sensation that an amputated limb is still attached—to build a bionic arm controlled by the muscle contractions that amputees activate when they move their missing appendage.

Although today’s technology generates prosthetic arms with increasingly sophisticated functions, namely multiple workable joints, these devices don’t always get thumbs up from users. Control of ultra hi-tech robotic arms is too complicated, amputees often report, to make them worth the effort. What a majority of amputees feel that they can manipulate naturally, on the other hand, is their missing limb, which oddly feels as if it’s still there. This phenomenon, dubbed “phantom limb mobility” (PLM), is at the heart of an ingenious new prosthetic solution designed for transhumeral amputees whose arms have been amputated above the elbow.

Unlike existing arm-control solutions that rely on extensive user training or surgery, the device under development can be operated intuitively by muscle contractions when amputees trace deliberate movements with their phantom limb. With a recent prototype test yielding promising results, the French PhantoMovControl team has good reason to believe that a working version of their no-surgery bionic arm is within reach.1

For the last sixty or so years, scientists have been exploring limb-control solutions based on myoelectric signals, the electrical impulses released by contracting muscles, detectable by electrodes placed on the skin’s surface. The underlying mechanism is straightforward: to trigger a desired movement in the artificial limb, users must contract the muscles left in their stump in a given manner to transmit a recognizable pattern of electrical signals to a receiver. In practice though, the task isn’t always so easy—especially for transhumeral amputees. PhantoMovControl project coordinator and neuroscientist Jozina de Graaf of the ISM2 observes that the difficulty for these users stems from their “having to control several joints—in the hand, wrist and elbow—with contractions in just two muscles—the biceps and triceps—which were previously uninvolved in wrist, hand or finger movements.” The upshot is that prosthesis control “remains laborious and attention-intensive, even after the lengthy training it necessitates.”

Prosthetic-limb control got a new boost in the late 2000s when “targeted reinnervation” techniques began to connect residual nerves from the lost forearm to other muscles put out of service by the amputation—pectorals for example, hence producing an extra source of myoelectric signals. But this solution still comes at a cost of heavy surgery on top of reeducation. 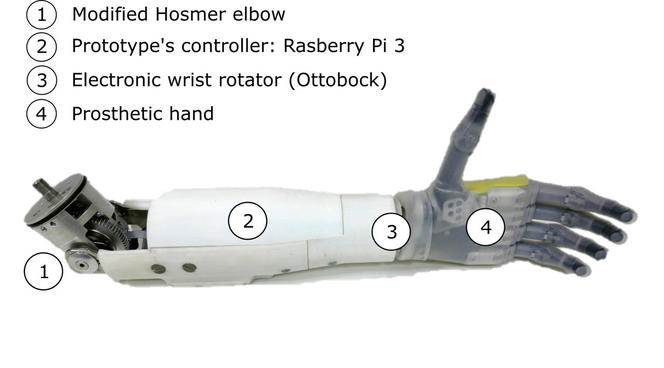 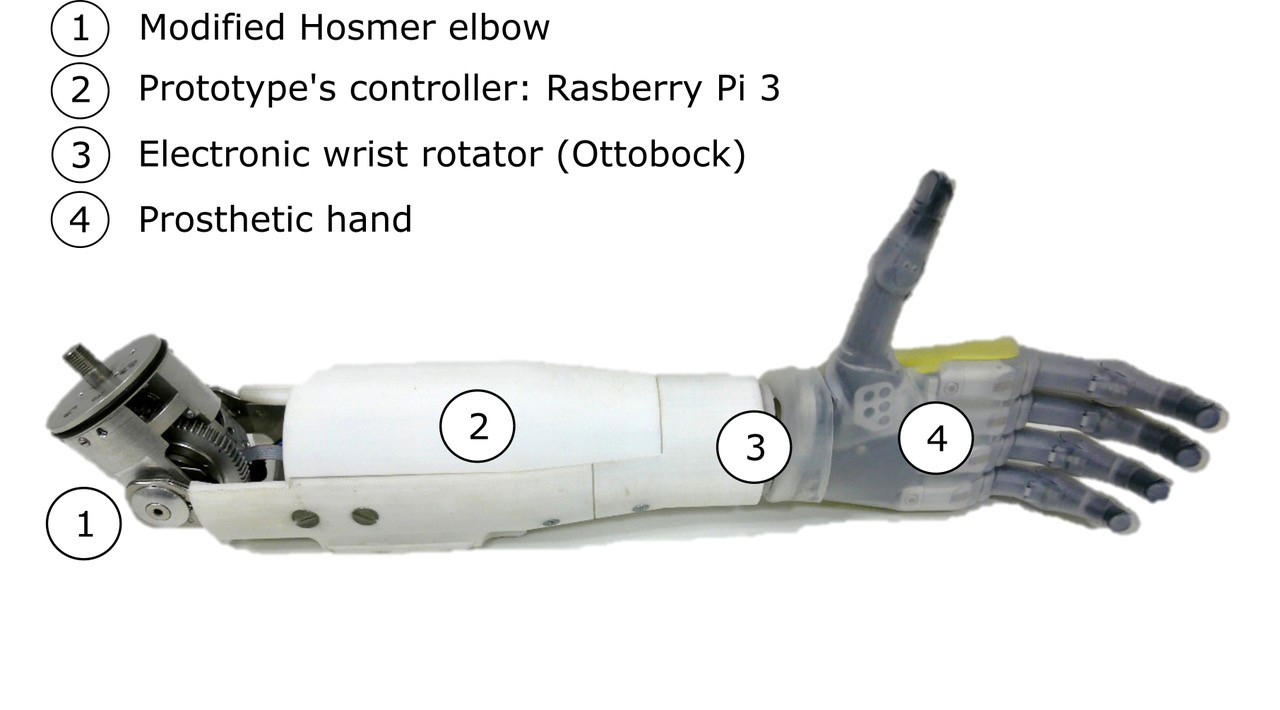 This is what pushed the French research group to explore whether or not a surgery-free alternative could be developed. Since 2015, the team has been pooling its knowhow in neuroscience, robotics, social and medical sciences to focus on the overlooked phenomenon of PLM. “Due to its invisibility,” explains De Graaf, “some think the phantom limb is ‘imaginary’ or the ‘result of unfinished mourning.’ A mobile phantom limb is even worse: how can you move a limb that doesn’t exist? Some patients end up thinking they’re crazy…” And even if doctors acknowledge the existence of PLM, “they’ve long ignored it deliberately to avoid having phantom-limb movements interfere with the control of myolectic prostheses.”

PhantoMovControl suspected, however, that PLM could be put to good use. After establishing, in a prior study, that roughly 75 % of arm amputees retain a sense of control over their missing limb,3 the group set out to show how exactly PLM can be harnessed for bionic-arm control.

Crucially, the muscles contracted by an arm amputee to move a phantom limb bear no relation to those used by a non-amputated person for the same action, possibly due to a nerve-reorganization process provoked by the amputation, which De Graaf describes as a “natural reinnervation of the stump’s muscular fibers.” The team therefore had to first identify and decode the muscle activity involved in phantom-limb movements. To do so, they adapted an approach that was “originally developed to decode the activity of still-intact hand and wrist muscles in the stumps of persons amputated below the elbow,” says team member and roboticist Nathanaël Jarrassé of the ISIR.4 “We started off by extensively analyzing and characterizing the myoelectric activity recorded when test participants moved their phantom limb.” Next, this data was fed into a specially-designed machine-learning algorithm, thus “trained to recognize PLM activity from the real-time data flow produced when an amputee controls their phantom limb.” Then, once the algorithm was linked up, via a control interface developed by the team, to a prototype they put together from commercially-available prosthetic parts (fitted with a new dedicated embedded robotic-control architecture), it could “issue orders to the prosthesis to move in the way that the phantom limb seemed to.” 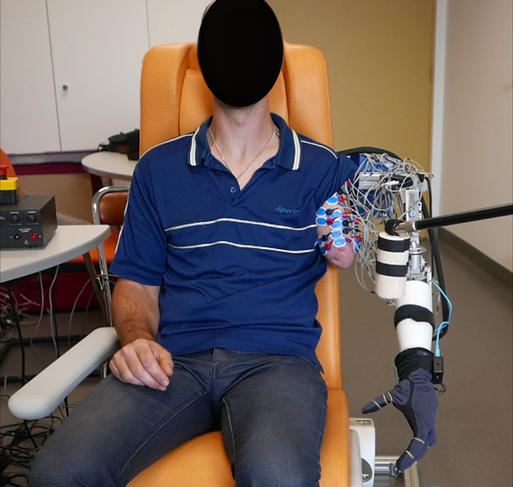 One of the participants had to bend the arm's elbow and grab a cylinder in front of him. 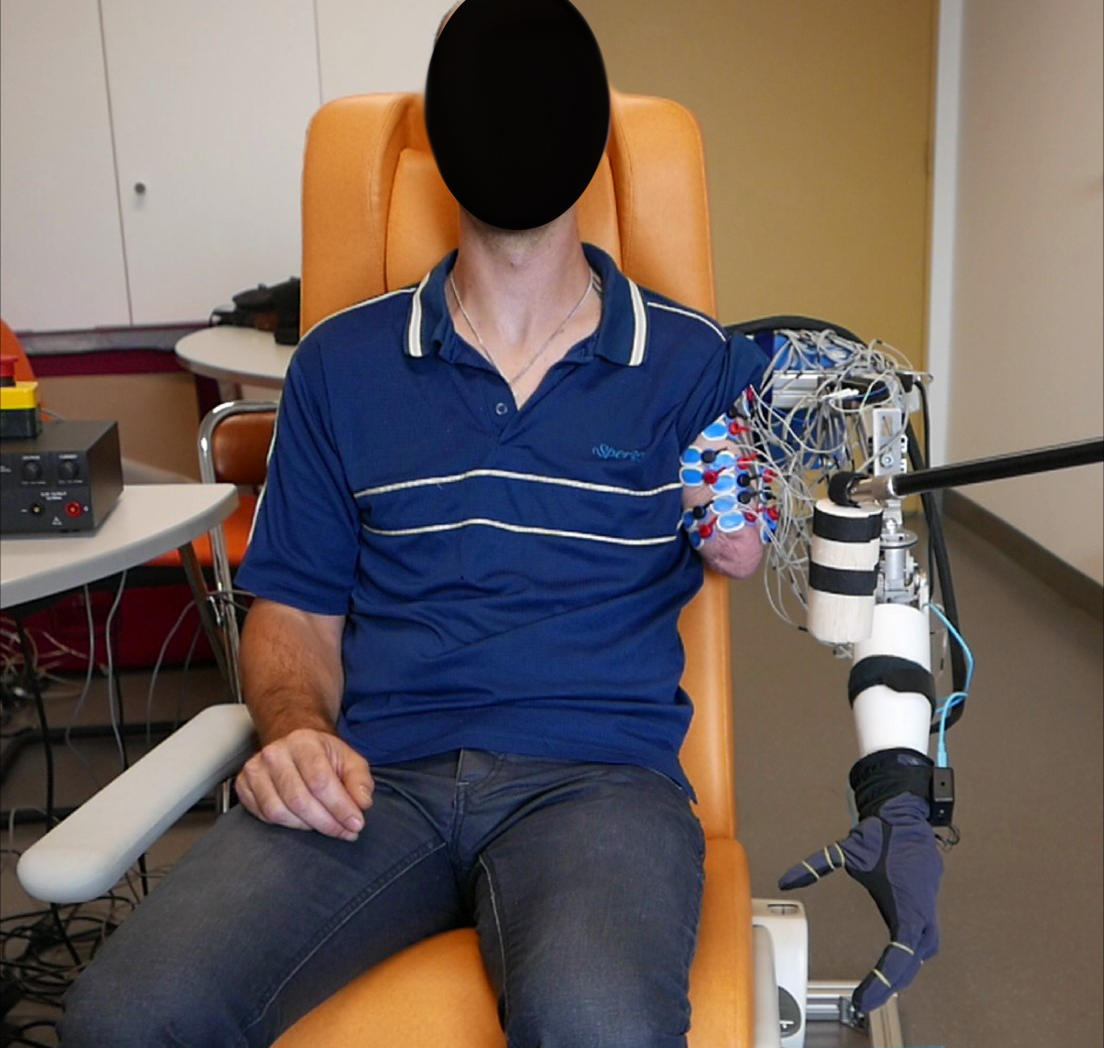 The beauty of the PhantoMovControl solution lies in its “intuitive, natural and easy” control that requires no training. “The user only has to execute a desired movement for the muscular activity registered in the stump to be analyzed by the prosthesis, which immediately mimics the phantom movement,” De Graaf points out.

Preliminary testing of the prototype only confirms the solution’s sure potential. Merely minutes after familiarizing themselves with the setup, two transhumeral-amputee participants managed to complete a series of maneuvers. “Even if the precision of prosthesis control and prototype movements are still improvable,” adds Jarrassé, “results show that the system is already fit for practical tasks requiring a degree of accuracy like picking up a clothespin between thumb and index finger.” The participants, incidentally, were “initially a bit sceptical,” recalls De Graaf, “then astonished and enthusiastic about the ease with which they carried out the tasks.”

The team’s next step, Jarrassé notes, is to “test a prosthesis worn by the participant”—not the case in the preliminary test where the prototype was only positioned beside the participant. “Attachment of the prosthesis to the stump is likely to interfere with measurement of myoelectric activity at the same spot, so we’ll need to resolve this difficulty through extra algorithms,” the roboticist anticipates. Looking further ahead, the team is also exploring “the integration of more PLM-controlled motorized joints, namely for individual fingers,” as the present prototype only allows for movements with the whole hand or else thumb-index pinching.

Naturally, the French solution can only work on amputees who exhibit PLM—a majority of them. But the team is also investigating “whether PLM can be ‘summoned up’ by training” for those who don’t have it,  declares De Graaf.

Article
Biomechanics off to a flying start in BMX racing
bioengineering

Slideshow
Microalgae: a Revolution in the Making

Article
Stretching the Boundaries of Bio-elasticity