River Seine: Preparing for the Flood

River Seine: Preparing for the Flood

After several days of exceptional rains, the water levels of the Seine reached 6.10 meters in Paris in June 2016.
KENZO TRIBOUILLARD / AFP
Share
Share
A few weeks before the Seine burst its banks in June 2016, a large-scale crisis management exercise dubbed "EU Sequana" was held in the Paris region with the aim of preparing for the next "flood of the century." Taking part was a team of researchers, including Valérie November, who has published a book about this exceptional event and the lessons to be learned from it.

Can you tell us about the EU Sequana exercise?
Valérie November:1 This was a crisis management practice simulating major flooding in the Ile-de-France region, organized on March 7th-18th by the SGZDS.2 It took two years of preparation and brought together 87 public and private operators. Four European countries—Belgium, Spain, Italy and the Czech Republic—also took part, while another thirty or so sent observers. The Defence Zone authorities suggested that the EU join in the exercise within the framework of the European Civil Protection Mechanism.

In concrete terms, how was the drill organized?
V. N.: It was held in the participants' crisis rooms—and sometimes in their subsidiaries, which means that far more people were actually involved. The players had to handle the crisis in real time, and were forced to react to 'surprises,' unexpected events that were regularly thrown at them by the organizers during the course of the day. The scenario was written and organized by the SGZDS, together with the INHESJ.3 The first week was given over to rising water levels, while the second focused on falling levels. This is a really novel approach, since little coordination work between partners has been done with regard to receding floodwaters, a process that takes much longer. Interestingly, there has been a gradual change in the philosophy underlying crisis management. The emphasis used to be placed on the unfolding crisis, and the actions implemented were mostly aimed at reducing the extent of the event or at preventing it. Yet the players today are aware that crises are inevitable, and spend more time thinking about their impact and the best way to deal with them.

How was your team able to observe the exercise at close hand?
V. N.: The Euridice research program,4 which I lead, focuses on risks and crisis management, and performs hands-on, action research. In 2015, the then prefect, Jean-Paul Kihl, General Secretary of the Paris Defence and Safety Zone (ZDS), wanted to bring in researchers who could provide an external perspective on crisis management, in the context of a particularly busy schedule of upcoming events in Paris: the COP21 in late 2015, EU Sequana in March 2016, and the 2016 UEFA European Championship in June-July.

We had just started our research when Paris was hit by the terrorist attacks of 13 November 2015.

The aim was also to observe potentially unexpected situations. We had just started our research when Paris was hit by the terrorist attacks of 13 November 2015. Despite the dramatic circumstances, the local authorities kept their commitment to allow us access, and so we found ourselves in the heart of the action. We were granted 'Confidential Defence' clearance and were able to go about our work. It should be pointed out that researchers in the Euridice program are still allowed entry into the defence zone, and that the new prefect, Marc Meunier, continues to support our research. 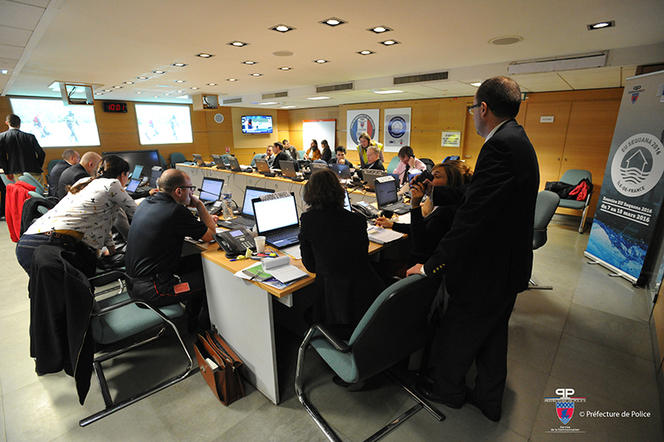 The crisis team at the Secretary General of the Defence and Safety Zone of Paris, as part of Operation "EU Sequana." 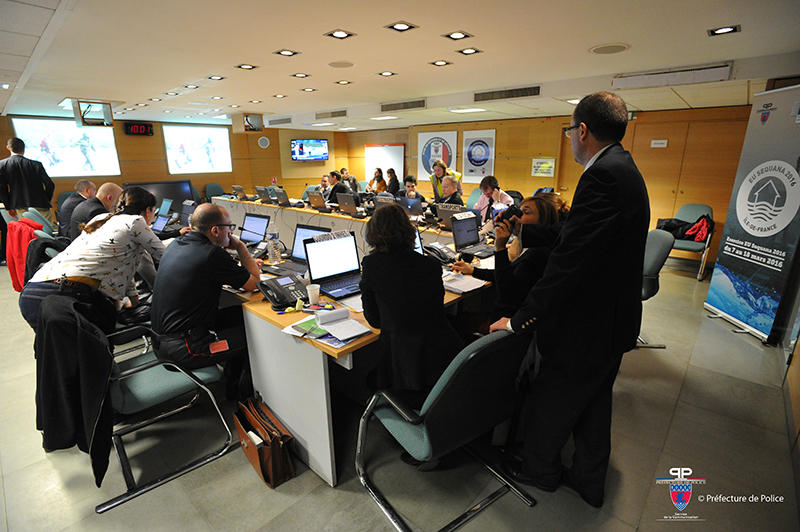 What kind of data were you able to collect?
V. N.: We knew that the exercise triggered many researchers' attention, so we sent out an email inviting them to join us in the observations. We formed a team of around forty scientists (geographers, sociologists, engineers and researchers in management science) from various institutions, including the Ecole Normale Supérieure (ENS), Université Paris-Dauphine, Ecole des Ponts ParisTech, Ecole des Mines d'Alès, the Sorbonne, Sciences Po, and even observers from the UK and Norway. This enabled us to be present at all sites, and to simultaneously observe between five and twelve crisis management rooms every day, using an evaluation grid that we had previously designed. For instance, we studied the relations between the participants and their preferred means of coordination, as well as the various ways in which they improvised when dealing with unexpected events. Looking at the various scenarios, we set up a sizeable database that provides us with a huge amount of material to analyze!

What are the main lessons from the exercise?
V. N.:It was an opportunity to share experiences and for the participants to realize how interdependent they were. Let me cite one example: imagine that the Paris public transport authority (RATP) wants to close  a few underground stations to protect its infrastructure, but that at the same time the Police force calls on drivers not to use their cars, which raises the issue as to how people can or must travel: should workers be allowed into the city or should they be kept outside to avoid further congestion? The participants also realized that certain initiatives need to be taken quickly, while others can wait. For instance, if a hospital has a generator that can operate for twelve hours, there is no immediate need to evacuate. If not, you need to act very fast. So knowing how every infrastructure operates is of utmost importance. The exercise confirmed this, depending on water levels, since the scenarios differ every time the situation worsens.

A TV channel even recorded fake news programs and live reporting on the development of the crisis.

A lot of work was also done on communication with the general public, not only via the 'information point' set up at the Champ-de-Mars on the weekend of March 12-13, but also through videos made available online, showing 3D simulations of rising water levels. A French TV channel even recorded fake news programs and live reporting on the development of the crisis. The aim was to raise awareness, among the inhabitants of the Paris region, of the risk of flooding and its many consequences. Furthermore, the participation of partners such as hospitals, the prison and social services enabled us to analyze issues related to maintaining activity, evacuation, supplies, etc, by shedding light on the potentially considerable knock-on effects. The urban fabric is in delicate balance. Once there is no electricity, a whole series of services are no longer available. Similarly, new problems arise if waste cannot be collected regularly. Such crises can therefore cause a huge amount of chaos. 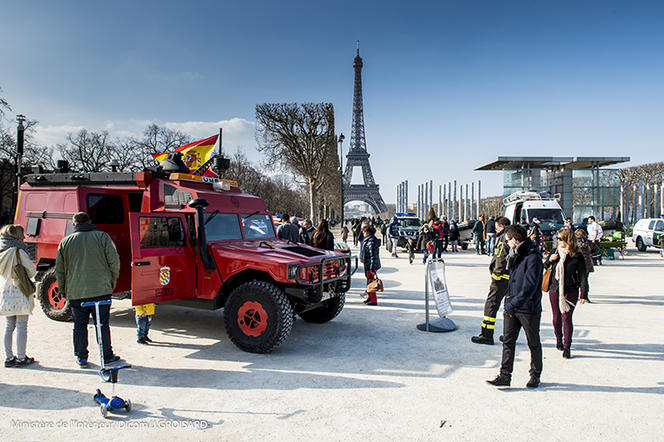 During the "EU Sequana" exercise, prevention operations were also carried out aimed at the general public, such as the one at the Champ-de-Mars, on 13 March 2016, which involved workshops, demonstrations, equipment, as well as general information. 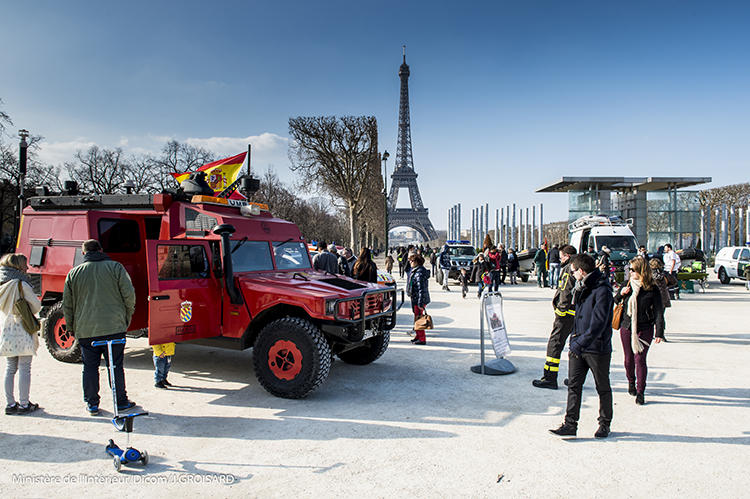 A few weeks after EU Sequana, the Paris region was hit by a genuine flood of the Seine:5 did the exercise prove beneficial in finding a response to this phenomenon?
V. N.: It was tremendously helpful. We were present in the crisis room throughout the event, and we could see that coordination had clearly improved after the exercise, since many partners referred to EU Sequana. It helped them meet up or get to know one another better, as all the contacts had been updated during the practice. As a result, participants benefited from their reviews of scenarios and operational timelines. They had also studied the sequence of operations in response to flooding, which enabled them to be reactive at the right time.
However, they were surprised by the speed at which water levels rose. No two disasters are the same, and no crisis unfolds exactly as expected. Above all, things won't necessarily happen as they did during the exercise! That's why a good crisis manager must be able at any time to adapt to a constantly changing and unpredictable situation.

Your new book, co-directed with Laurence Créton-Cazanave, comes out exactly one year after EU Sequana. From the look of it, your novel research approach has resulted in an atypical piece of work.
V. N.: One of the Euridice project's lines of research is to work on the capitalization of knowledge. As action researchers, we proposed this book as a form of capitalization. Very little has been written about the exercises, and we also wanted to present the experience both from the point of view of researchers and that of operators. The book is organized in an unusual way, in that it can be read either as a sequence of events or by topic. This dual approach means that it can be approached either chronologically (before, during, and after the event), or by subject: writing of the scenario, resources, flow of information, planning, culture of risk, and so on. 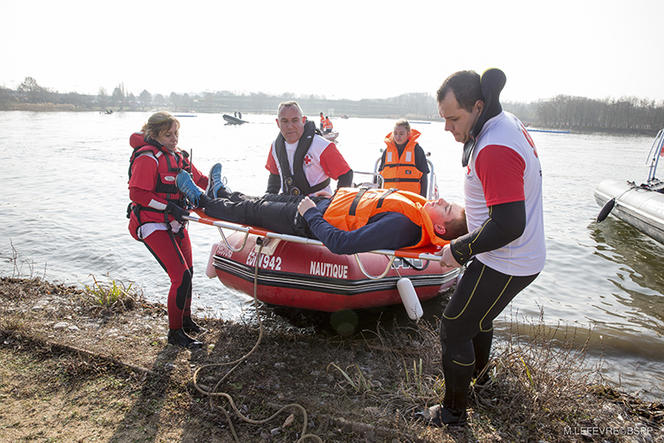 Evacuation simulation during the "EU Sequana" exercise in Valenton (Val-de-Marne), on 12 March 2016. 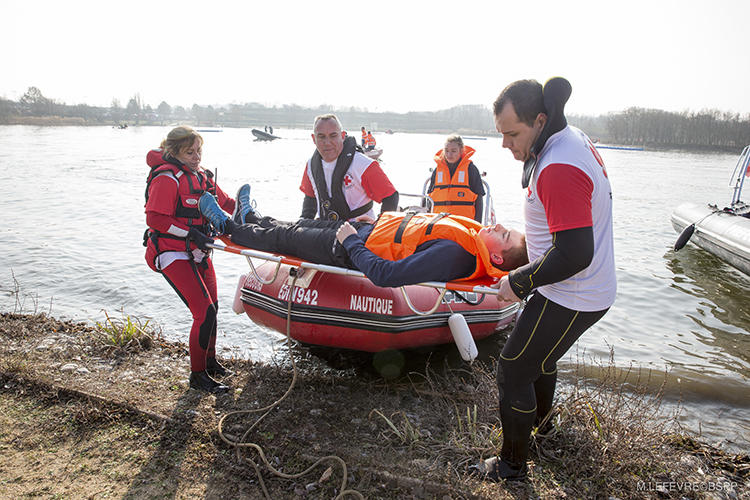 In your book, you wonder whether the exercise will be seen as a landmark study. In your opinion, does it herald a new way of preparing for crisis management both in Europe and worldwide?
V. N.: I hope that this won't turn out to be a one-off event, but it required so much preparation that it can't easily be repeated. It was also very expensive, and funding (in this case, European) isn't easy to obtain. For some organizations, carrying out exercises is routine, they take place all the time, but such a large-scale simulation, with funding and numbers of participants to match, is extremely rare. Hence the importance of learning as much as we can from it.

Bruno Caïetti is a journalist.