La Soufrière volcano, Guadeloupe. Some muons produced by cosmic rays have so much energy that they can travel right through the lava dome, in the same way as X-rays travel through the human body during an X-ray examination.
A. Brusini / hemis.fr
Share
Share
Scanning volcanoes to better identify their weaknesses: this groundbreaking work is made possible by muon telescopes, a new technology developed a mere ten years ago and now in operation on La Soufrière volcano in Guadeloupe.

What do cosmic-ray muons1 and volcanoes have in common? Not much at first sight. However, the amazing ability of these cosmic-ray generated particles to penetrate matter (as much as several hundred meters of rock in some cases) caught the attention of geophysicists, always on the lookout for new ways of probing our planet. "Muons are produced by collisions between cosmic rays and atoms of gas in Earth's upper atmosphere," explains Dominique Gibert, a geophysicist and specialist in imaging systems at the Géosciences laboratory2 in Brittany. "Although muons have been known since the 1940s, their astonishingly high energy was only discovered when particle physicists started to bury particle accelerators to avoid cosmic ray bombardment—or so they thought. The scientists' efforts proved unsuccessful since the highest-energy muons nonetheless managed to travel through tens of meters of soil and concrete!" In fact, this is what prompted the physicist and Nobel laureate Luis Alvarez to try using muons to scan the interior of the Pyramid of Chephren in the late 1960s.

The Earth's surface is subjected to a constant rain of muons from all directions.

Why then not do the same with volcanoes? The idea began to form in Gibert's mind some ten years ago, while a Japanese team also started exploring the same avenue. "The Earth's surface is subjected to a constant rain of muons, with every square centimeter being struck by around one particle per minute; they come from all directions, which makes it possible to obtain images from all angles," Gibert says. The first muon telescopes, developed in collaboration with the Institute of Nuclear Physics of Lyon (INPL),3 were installed on La Soufrière in the early 2010s, causing a stir among specialists.

Although the general principles underlying volcanic activity are well understood, the volcanoes scattered across the planet still hold many secrets for scientists, who are anxious to find out exactly what goes on inside them. "Volcanoes do not just contain rising magma, which can cause eruptions of lava: they are first and foremost hydrothermal systems that can store considerable amounts of energy," Gibert explains. "They are full of cavities and fractures where water constantly circulates, together with steam made extremely acidic by the volcanic gases originating in the magma chamber. This process literally eats away at the volcanic domes from the inside." To such an extent that, for most active volcanoes, the most important risk is not that of an eruption but rather the partial or even total collapse of the lava dome. 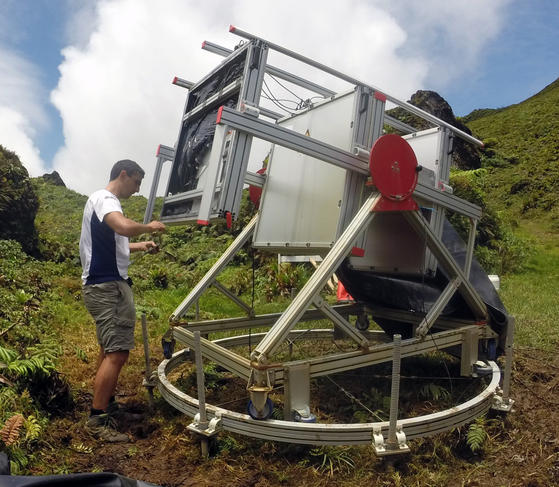 Six muon telescopes have been installed on La Soufrière volcano in Guadeloupe. It takes two weeks for a telescope to obtain an image. 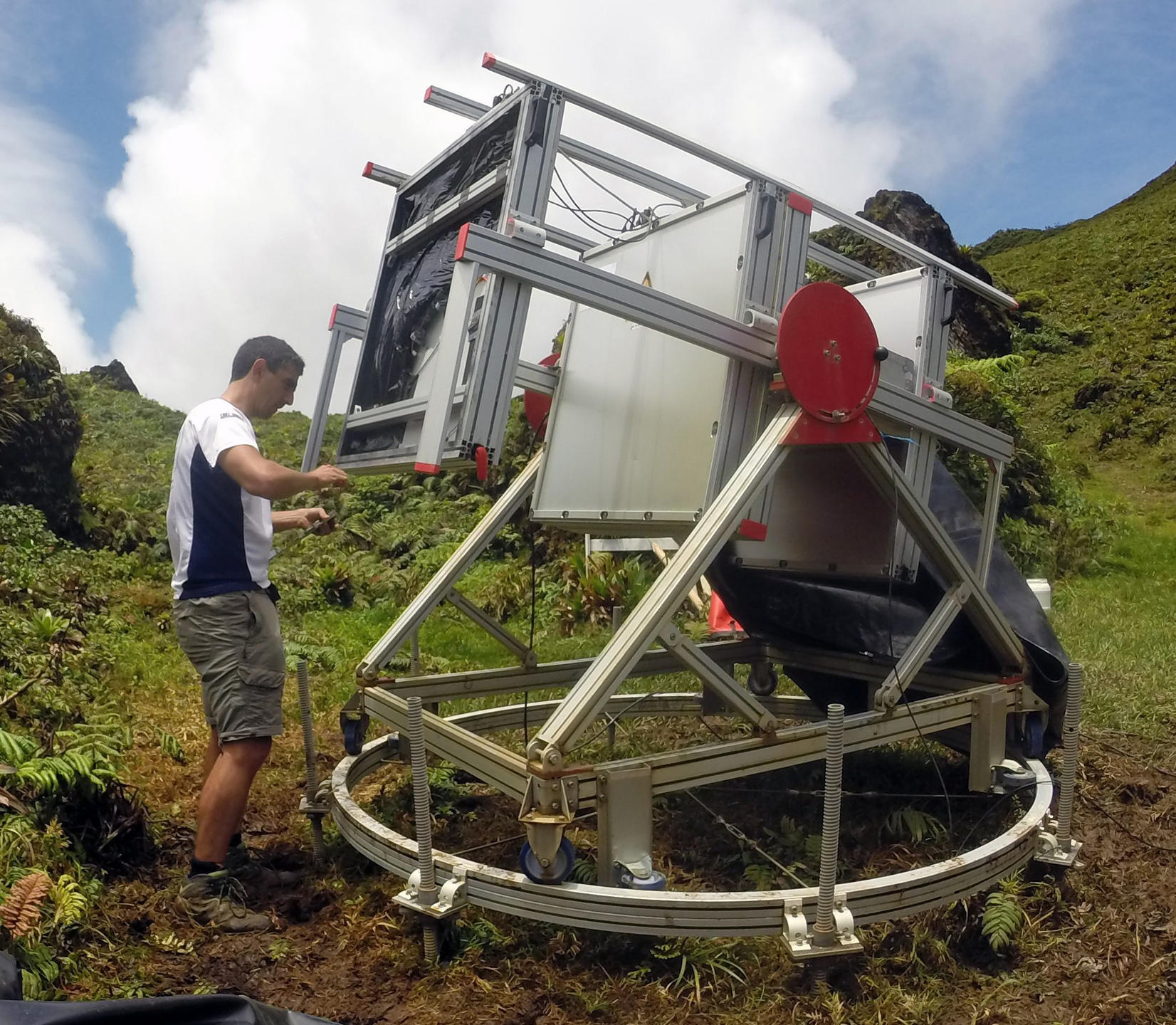 Unlike other imaging methods tested until now, such as electrical resistivity tomographyFermerElectrical tomography makes it possible to send current through volcanoes to inform about the nature of the present rocks. But this method makes it impossible to distinguishing between a cavity full of air, which does not conduct electricity, and a mass of Andesite, a type of lava that has strong insulating properties. and seismic tomographyFermerThis imaging method involves sending vibrations to the ground to determine its nature, but it is difficult to detect cavities inside volcanoes because waves tend to circumvent them., the main advantage of muon tomography is that it provides precise information about the density of the materials found inside the volcano, enabling researchers to determine their nature (rock, liquid, gas), and identify not only any cavities present but also regions in the volcano with lower density, where weaknesses are most likely. It is important to realize that this technique will not make it possible to obtain daily snapshots: on La Soufrière, which is about one kilometer wide, a telescope takes two weeks to produce an image, while on larger volcanoes like Etna and Vesuvius, it would take a year using current detectors, although, as Gibert points out, this could be reduced to three months if their surface area were increased.

Shedding light on the innermost workings of volcanoes

Despite the (relative) scarcity of images, muon tomography is already revealing unexpected aspects of the innermost workings of volcanoes. "Two years ago, emissions from fumaroles on La Soufrière began to increase, at a time when five muon telescopes were in place on its southern side," recounts Gibert who was able to observe the processes inside the volcano in real time—a first in the history of volcanology.

In just a few months, the images showed that the volcano became less dense and opaque.

"In just a few months, we witnessed extremely rapid changes. In the images, the volcano became less dense and less opaque. Pockets of steam formed, expelling the liquid water present beneath the southern crater." The researchers were amazed at the sheer mass of materials involved: in two months, during the summer of 2014, an astonishing one million tons of fluids moved around inside La Soufrière. The results were so convincing that muon telescopes are now expected to be permanently included in the monitoring network, with the aim of predicting the risks of collapse and phreatic eruptions, i.e. explosions caused by the sudden production of steam within the volcano. 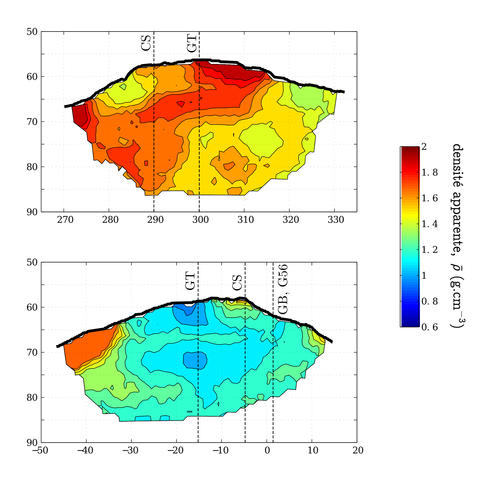 These tomographic images of the dome of La Soufrière volcano in Guadeloupe (taken from two different spots) reveal the high heterogeneity of the volcanic edifice, considerably altered since its formation in 1530. 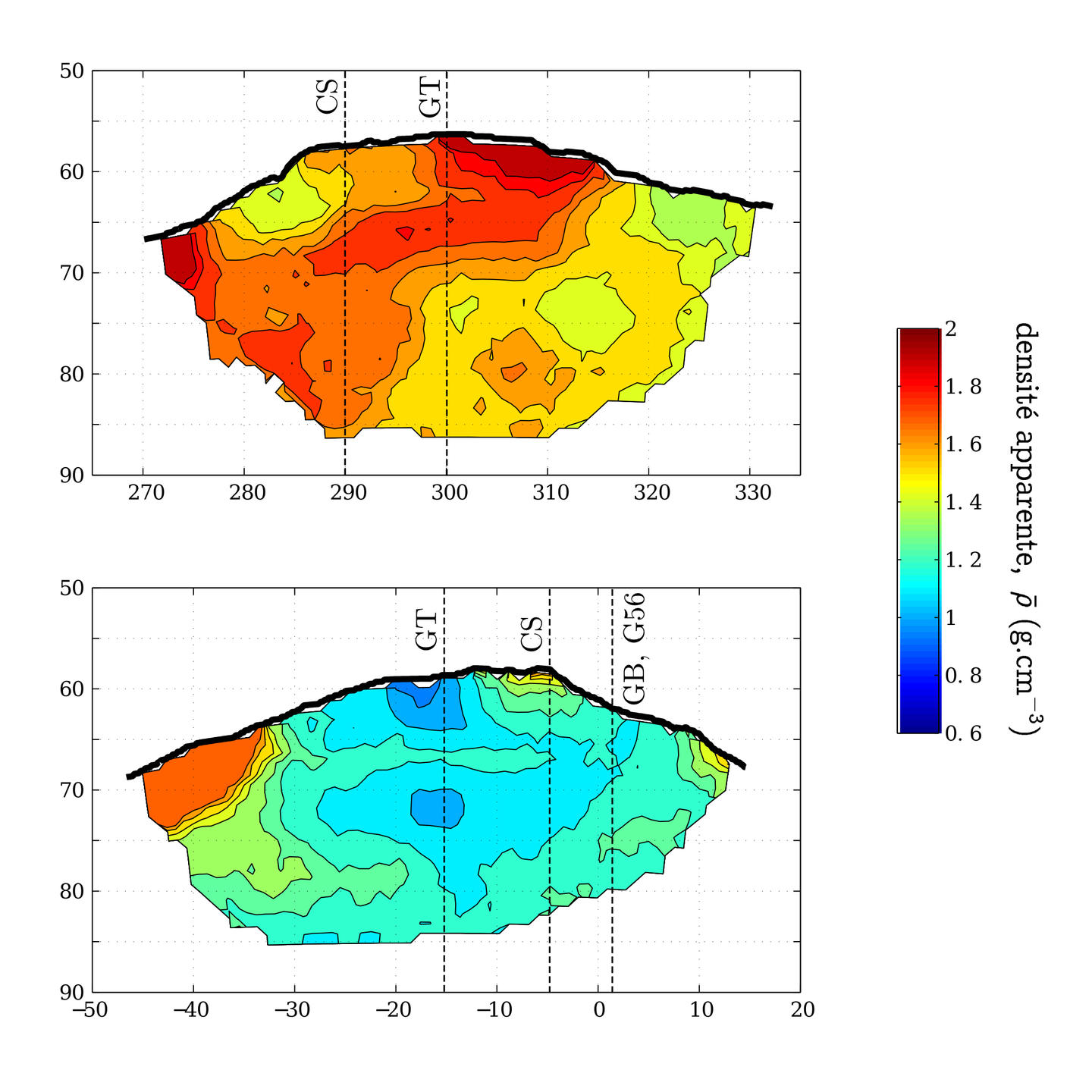 In any case, the experimental work being carried out on La Soufrière is eliciting a great deal of interest elsewhere in the world. New Zealand wishes to acquire muon telescopes, while scientists from the Géosciences laboratory and the INPL should soon be placing their detectors on the Soufrière Hills volcano in Montserrat, an island near Guadeloupe partly destroyed by an eruption in 1995, resulting in a completely new lava dome. However, it should be emphasized that muon telescopes cannot be used to predict the onset of magma eruptions. "To detect rising magma inside the volcano, we would have to place our detectors beneath it, which is obviously impossible," Gibert points out.

Muon telescopes are already arousing interest in other disciplines. In hydrology, they could image the movement of water masses beneath the karst plateaus of southeast France (and elsewhere). Some are also hoping to rely on them to evaluate the safety of locations selected for the deep storage of radioactive waste or CO2, while industry is keen to use them to take a fresh look at its own processes.

Opinion
Water management: should we be “environmental plumbers”?
Geophysics