The fruits of Pollia condensata, a wild African plant, owe their shimmering color to biological liquid crystals.
Juliano costa/COMMONS WIKIMEDIA
Share
Share
Known for their use in flat screens, liquid crystals are also naturally present in both plants and animals. An essential tool in fundamental research, their study has opened up immense perspectives for applications, notably in the field of biomimetic materials.

Biological liquid crystals (LCs) were discovered as early as 1888 by the Austrian botanist Friedrich Reinitzer (1857-1927), who observed strange colored phenomena when analyzing carrot root extracts under the optical microscope.

However, "when compared to the synthetic liquid crystals used in flat screens, which have been the subject of considerable study since the end of the 1960s, biological LCs have received much less attention from scientists, even though they are ubiquitous and crucial to many biological processes!” observes Michel Mitov, a physicist in the Liquid Crystal team at the CEMES1 and author of a recent review article on current knowledge in this field.2 “I hope that this paper will help draw fresh attention to the subject and trigger new research opportunities,” he explains.

They are everywhere in nature!

Liquid crystals are not a special material. They constitute a stable state of matter, in the same way as the crystalline, liquid and gas states. As their name—an oxymoron—suggests, they have the properties of both a liquid (fluidity) and crystalline solid (optical properties, etc.). That said, some may be completely solidified.

Unlike the liquid crystals found in flat screens, where particles are preferentially oriented in the same direction, in most biological LCs they are arranged as a helix. It should also be noted that this specific, so-called "cholesteric" organization (referring to the cholesterol derivatives in which this was observed for the first time in the 19th century) concerns—either transiently or permanently—most of the molecules that are essential to life. “This is notably the case of DNA, cell wall cellulose in plants and fruits, collagen in bones, cornea or fish scales and chitin in the exoskeletons of insects and crustaceans,” says Mitov.

DNA provides a good illustration. “Some ‘simple’ chromosomes containing low levels of histone proteins and devoid of a ‘nucleosome’ structure can indeed display a cholesteric LC organization. That is the case for the DNA of bacteria or single-cell algae called dinoflagellates, as demonstrated back in 1965 by the French biologist and physicist Yves Bouligand, a pioneer in this area,” explains the biologist Françoise Livolant from the LPS3 in Orsay, near Paris. With her team, she recently demonstrated that this cholesteric structure could also transiently concern the DNA of bacteriophages,4 viruses that kill bacteria. 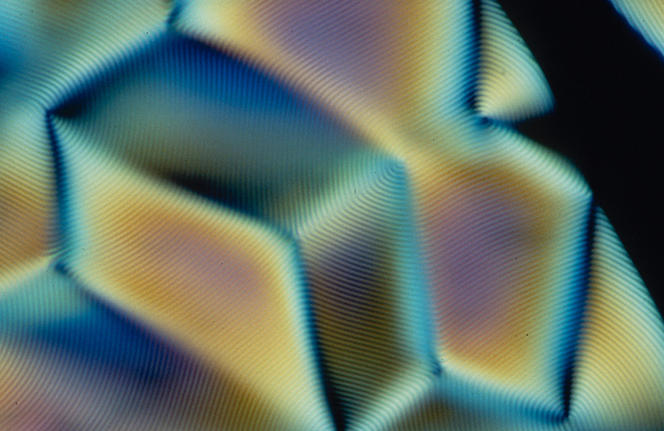 DNA in the liquid crystal phase. At a certain DNA concentration, the molecules align themselves in parallel to form a so-called “cholesteric” structure. 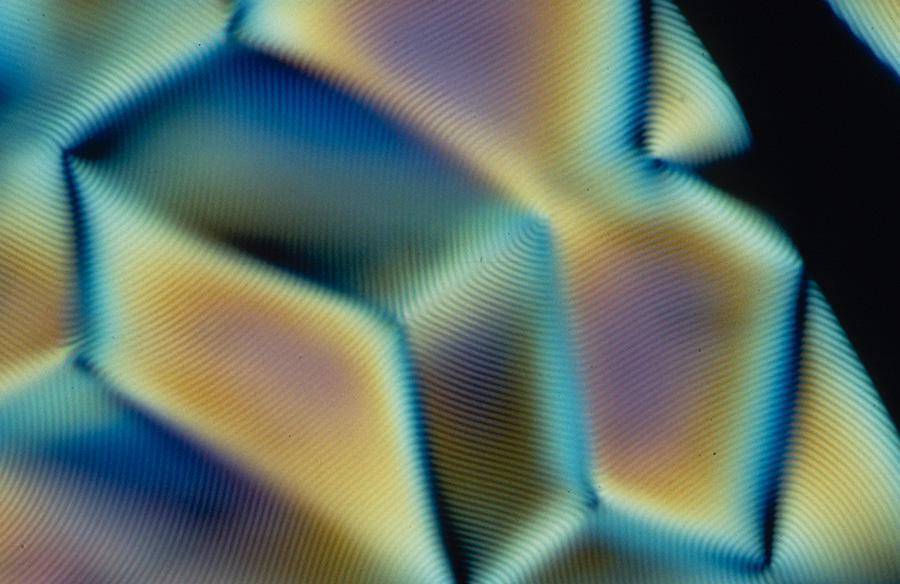 The cholesteric organization of biological molecules endows living matter with a variety of crucial physical properties. It enables the optimization of DNA compaction in the nucleus of cells (when unwound, chromosomal DNA can reach a length of two meters!), and strengthens the shells of arthropods (80% of characterized animal species), our bones and fish scales. It is also the reason for the iridescent colors of certain fruits or insect cuticles.

For example, biological liquid crystals give an intense electric blue color to the fruits of Pollia condensata, a plant from Africa. “In 2012, the British team led by Silvia Vignolini at the University of Cambridge analyzed the structure of these fruits using transmission electron microscopy. It appeared that their iridescent color results from the cholesteric arrangement of LCs in the cellulose strands of their skin, and thus not from pigments that selectively absorb light, as is frequently the case for colors in the natural world,” notes Laurent Heux, a physical chemist at the Cermav5 in Grenoble. 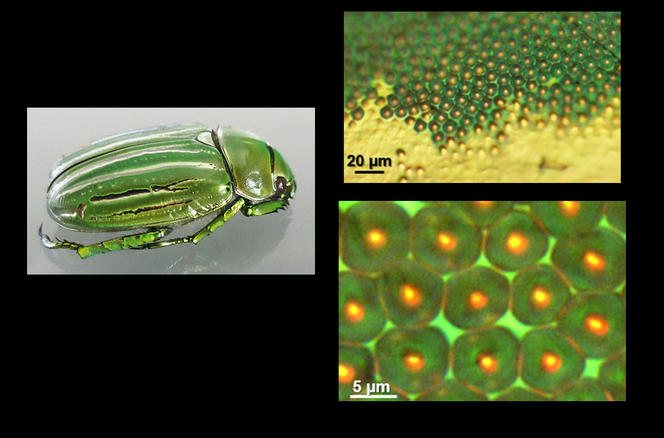 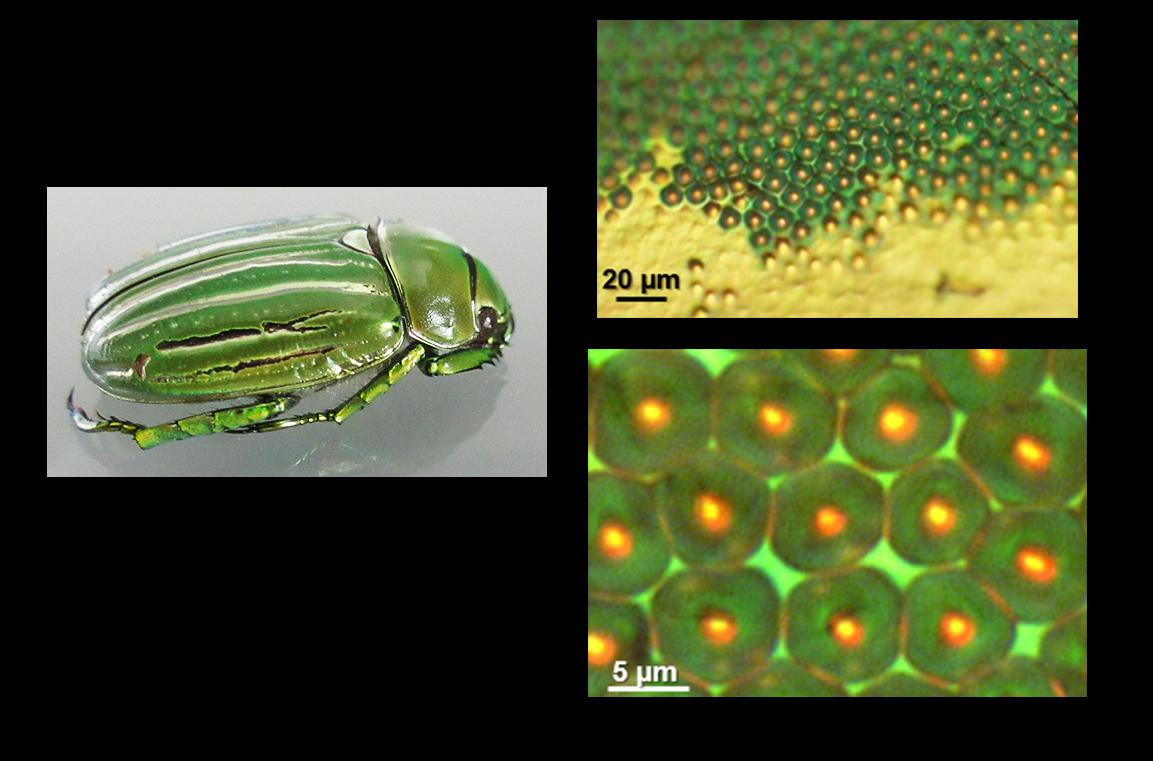 The cuticle of the Chrysina gloriosa scarab beetle (left) with its alternating green and silver stripes, owes its iridescence to the cholesteric liquid crystal organization of its chitin molecules. Top right: microscopic view of the interface between the green and silver stripes of the cuticle. Bottom left: enlarged view of the polygonal texture of a green stripe.
M. MITOV
M. MITOV
Share
Share

Indeed, the helicoid structure of cholesteric LCs endows them with the ability to reflect light. “The color depends on the helical twist (editor’s note: a complete turn of the helix): if the pitch is very tight, reflection occurs towards the blue or even ultraviolet range; if the helix is loosely twisted, reflection is in the red or infrared range, and the color also changes with the angle of observation,” points out Mitov.

Cholesteric LCs are therefore the reason for the shimmering colors of the Chrysina gloriosa scarab beetle whose cuticle of cholesteric chitin displays bright green and silver stripes. Mitov’s team recently studied this insect in greater detail.6 They found that "the silver stripes behave like broad mirrored strips reflecting all wavelengths of visible light and beyond. As for the green stripes, we discovered that they contain a network of micro-mirrors that focus light in different patterns—spots or rings—depending on the incident wavelength.”

Yet what is the purpose of these beautiful iridescent colors? According to Mitov, they may have different functions, depending on the species concerned. “The fruits of Pollia condensata may be designed to attract birds and thus facilitate the distribution of seeds; in the case of silvery beetles, the purpose may be camouflage in the environment, and for shoals of fish, they may provide optical communication so that each fish can orient itself in the right direction, depending on the type of light reflected by its neighbors (pattern, polarization), etc.”

At present, biological LCs are still raising numerous fundamental questions: why can the twisted structure be found in such varied biological edifices? Why is there a predominance of left-handed torsion? What are the different possible functions of biological LCs, etc.? The answers may prove crucial to both fundamental research and potential applications—which are numerous—notably in the fields of biomaterials and regenerative medicine. 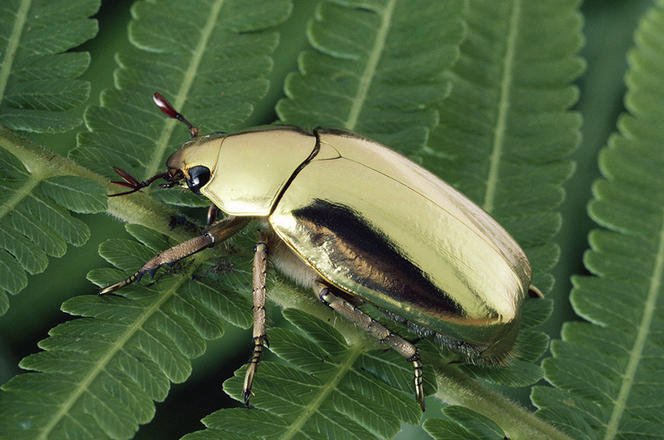 The iridescent cuticle of silver scarab beetles (here the golden scarab beetle of Costa Rica) appears to have developed as camouflage. 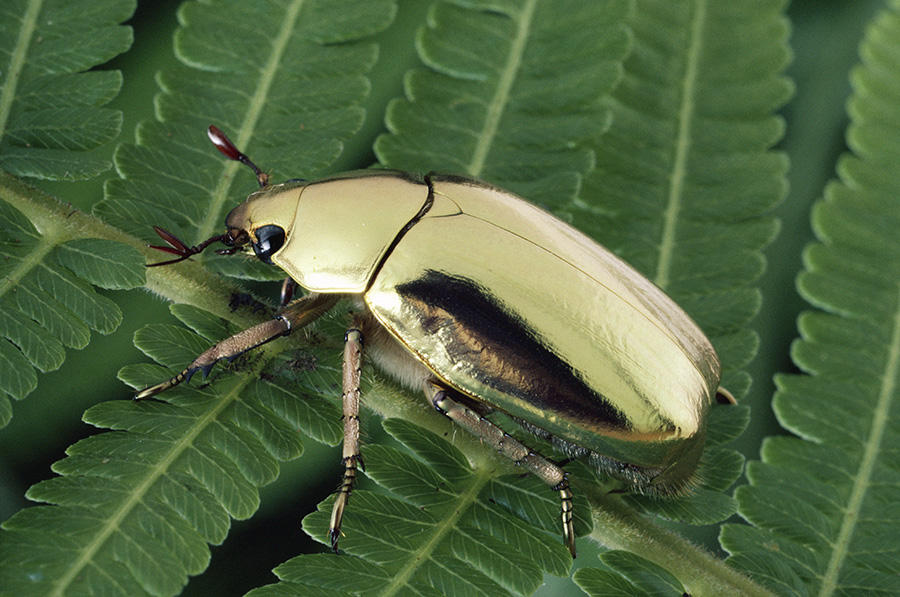 Some scientists are already working on applications inspired by these LCs. Gervaise Mosser of the LCMCP7 is one of them. “When an organization reminiscent of the molecules observed in stabilized liquid crystal phases in the bone or cornea is reproduced from purified collagen, it is possible to obtain biomimetic materials (editor’s note: inspired by living organisms) that could serve as implants with a lower risk of rejection or complications in the event of a graft,” she says.

Thanks to funding from the French research foundation (Fondation pour la Recherche Médicale), her team has developed dense and transparent collagen matrices, which locally display LC organizations that mimic those found in the cornea.8 A few months ago, this material was grafted into rabbits at the Rouen University Hospital, in Normandy. “The outcome, which we expect in a few weeks’ time, will determine the next step in this adventure, notably in terms of its potential transfer to humans.”

In Grenoble, Heux and his colleagues are reproducing in the laboratory the LC organization of cellulose observed in the fruits of Pollia condensata.9  In the longer term, this work could lay the foundations for the development of biomimetic materials for photonics, the branch of physics devoted to studying and manufacturing components to generate, transmit or process optical signals.

Yet it is difficult to go any further at this stage. "Scientific publications in this field— including those by specialists in optics such as Silvia Vignolini—are not very explicit as to the precise nature of potential applications,” Heux points out. It is clear that for both fundamental and applied research, a great deal remains to be discovered and understood in this area. Endowed with fascinating properties, biological liquid crystals offer a tremendous challenge for the future.

See author's bio
The Mystery of the Mehrgarh AmuletPrevious
Where Have all the Farmland Birds Gone?Next