Home / Articles / In Arizona, a Miniature Earth under a Dome

In Arizona, a Miniature Earth under a Dome

Home / Articles / In Arizona, a Miniature Earth under a Dome

In Arizona, a Miniature Earth under a Dome

Aerial view of Biosphere 2 in Oracle, Arizona.
Steven Meckler/UANews
Share
Share
Biosphere 2, an immense scientific project born in the 1980s, is a miniature version of our planet recreated in the middle of the Arizona desert. Initially intended to prepare for stays on Mars or the moon, the prototype is now used to conduct environmental research and anticipate how ecosystems adapt to climate change.

The silhouette of the Biosphere 2 science complex1 dances on the horizon in the heat of the Arizona desert. The building, which is made entirely of glass and resembles a giant greenhouse, is home to a miniature Earth. While walking through a tropical forest beneath its big glass top, do not be surprised by the overhead fan or the piping on your right. In a curious mix of mechanics and nature, large devices recycle air amid the plants, thereby operating the giant machine that is Biosphere 2. Look up and you will see treetops bumping up against the ceiling. Listen and you will hear the waterfall marking the beginning of the water cycle. The hot and humid atmosphere of the forest gives way, without the least border between them, to the salty smell and warm air of an artificial ocean. All in all, five miniature biomesFermerA vast biogeographical region stretching beneath the same climate, characterized by the vegetation and animal species that have adapted to life there. Examples include the tundra, tropical rainforest, savanna, or coral reef  connect within the overall ecosystem which measures over one hectare. You will never go so quickly from a savanna to a mangrove forest by way of a desert.

Biosphere 2 was created in the late 1980s, and is to Earth system science what a particle accelerator is to physics. It enables a fundamental exploration of environmental reactions within a controlled system. Imagine a place that is entirely hermetic, sealed to the ground by 500 tons of stainless steel plates. The structure loses little air, but it does depend on external variables. Depending on the temperature, the air either dilates or contracts, thereby running the risk of breaking open the enclosure. This is why the platform is equipped with a "lung," a sixteen-ton structure that rises or descends according to internal pressure. This marvel of engineering offers scientists a unique field of play. "Since 2014, the CNRS, which is associated with Biosphere 2, has taken advantage of this one-of-a-kind facility to better understand feedback effects between climate change, the carbon cycle, and the water cycle, along with the responses of habitats to these modifications," explains Régis Ferrière, director of the iGlobes laboratory2 based in Tucson. While the focus of research has evolved over the years, the primary objective of Biosphere 2 has not changed: to understand the functioning of our planet and our impact on the biosphere. 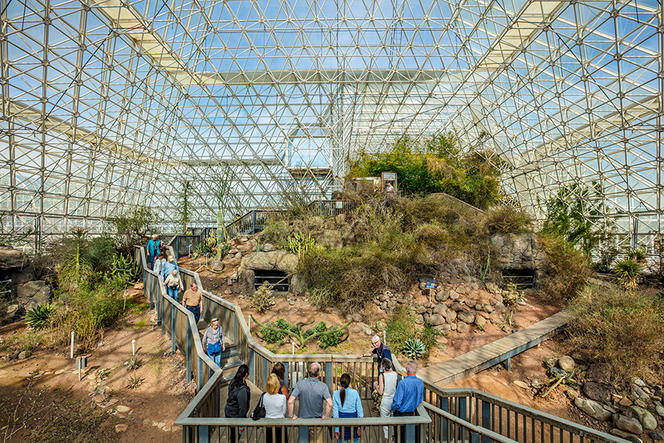 Visitors explore the area corresponding to the desert. 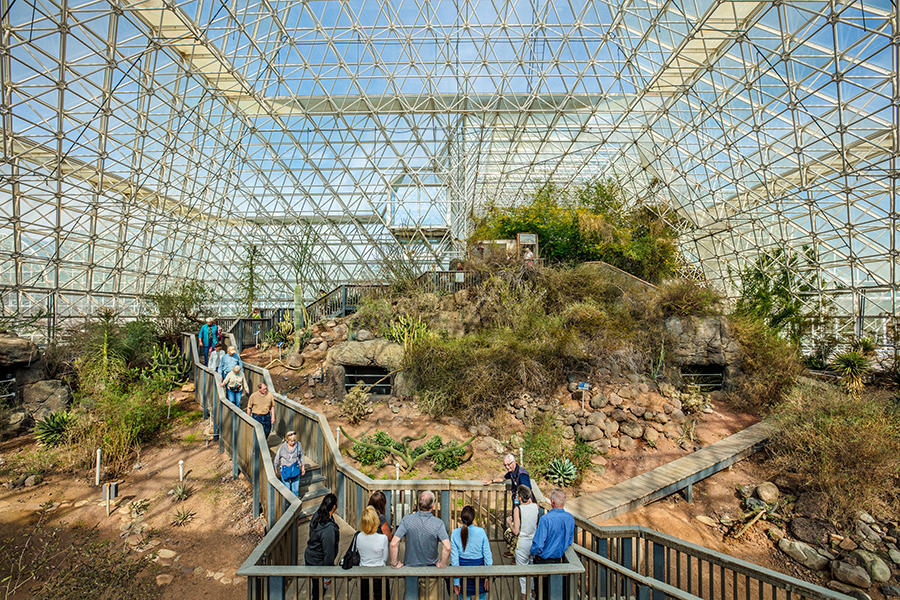 Next stop: the Moon

Initially conceived as a model for lunar or Martian colonization, the Biosphere 2 experiment was named after the first biosphere, the Earth. In the 1990s, two experiments in self-sufficiency were conducted to explore our capacity to live autonomously. "At the time, this research highlighted the need for a patchwork of all the planet's biomes in order to be autonomous. It was maybe a little simplistic, but it does remain an open question," Ferrière adds.

Initial experiments were non-conclusive. The first attempt was marked by a drastic loss of oxygen within the platform, whose cause went unidentified. The second was abandoned after just a few months, demonstrating that humans actually know little about how their own environment functions.

"In 2007, under the leadership of Joaquin Ruiz, the Vice President for Innovation at the University of Arizona, and Peter Troch, Professor of Hydrology, a new phase started, placing this facility at the heart of research that cannot be conducted elsewhere. The key issue was to take advantage of the unique qualities of the facility to better understand ecosystems and how they function."

The Response of Habitats

All habitats are currently subject to environmental stress, which influences their dynamics and evolution. Facilities such as Métatron in France, which studies how animal and plant populations react to climate change, and Biosphere 2—both of which include responses across an entire ecosystem—play a crucial role in understanding how the environment reacts when faced with changes in climate. "What's unique about Arizona is the presence of a small patch of tropical forest in very close proximity to some of the best environmental science laboratories in the world. Since they were created approximately 30 years ago, the plant communities have had time to stabilize. Today, they are the subject of innovative studies conducted under such controlled conditions, for instance with volatile organic compounds." 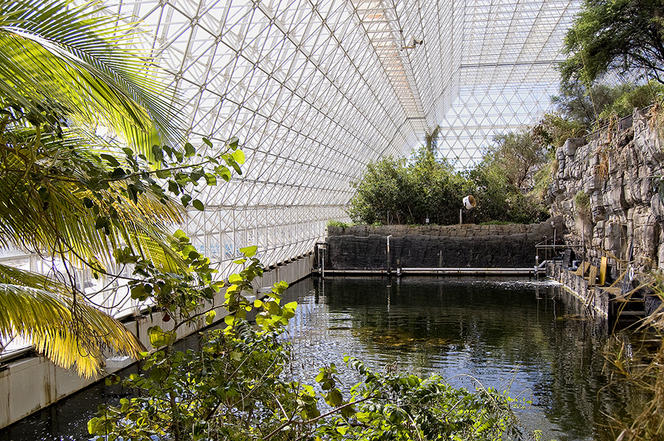 With nearly 685,000 liters of total water volume, the area recreating an ocean allows for the simulation of a Caribbean coral reef ecosystem. 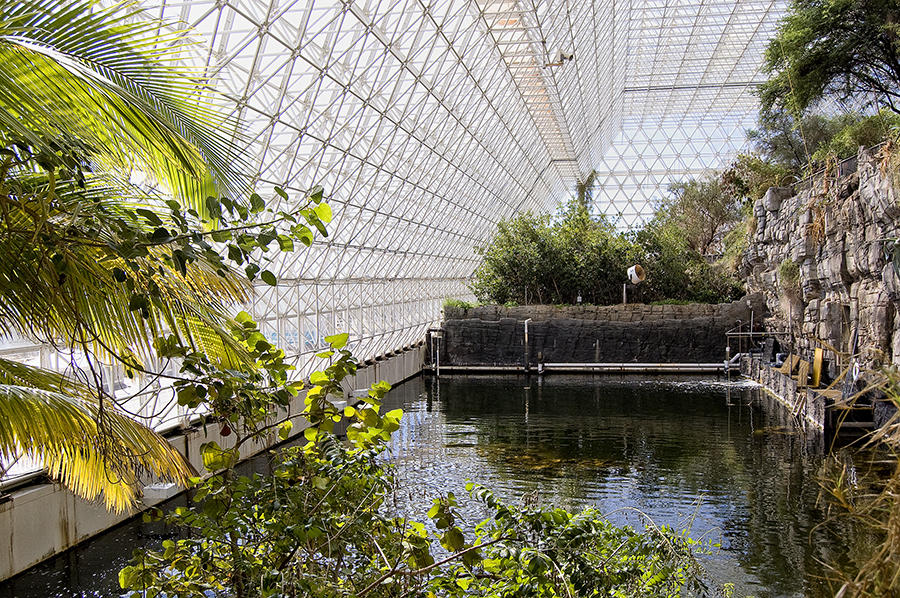 These gaseous organic species, which are important actors in atmospheric chemistry, have an impact on the greenhouse effect as well as ozone concentrations. Studying their composition and involvement in the functioning of plants on such a scale is difficult to implement in a natural setting, due to the greater number of sources, meteorological conditions, etc.

The team of Professor Laura Méredith, a specialist in Ecosystem Genomics at the University of Arizona, has succeeded in observing such phenomena by taking advantage of Biosphere 2’s closed system, which frees scientists from a number of constraints.

A little further, a consortium of international teams led by Diane Thompson, Professor of Geosciences at the University of Arizona, is exploring the complex effects of variations in atmospheric CO2 on the functioning of ocean ecosystems. "We analyze the genetic diversity response of coral reefs to changes in climate,” Ferrière points out. “Are there genetic variants of coral that are more resistant than others to changes in temperature or seawater pH? How do different genetic varieties interact and jointly respond to the effects of climate change?" Each biome indeed has its own specific set of issues.

Landscape Evolution and the Carbon Cycle

Beneath large glass chapel-like structures, three artificial hills measuring 11 by 6 meters—studded with probes and electronic sensors—are used to study the water and carbon cycles of an entire drainage basinFermerNatural geographic area collecting the precipitation that feeds into a body of water. . Sprinklers release rain of varying intensity onto that basalt-based soil that is characteristic of semi-arid zones.

"We’re trying to grasp the soil’s carbon footprint,” Ferrière continues. “While the altering of minerals is a process that traps CO2 in the soil, soil respiration is a mechanism that goes the opposite direction, with a series of living processes that release CO2 into the atmosphere. We want to know how the two balance out under different conditions. The interaction is further complicated by the fact that the alteration is also influenced by the activity of microorganisms in the soil."

A similar miniaturized system at Écotron, an entirely confined and controlled climate simulator located around Paris, is supplementing this experiment.

"The decomposition of organic matter by the enzymes of certain microorganisms is a crucial link in the carbon cycle. Climate change, however, imposes genetic selection on microorganisms, as well as their functional properties and capacity to secrete enzymes. We are using the two facilities of Biosphere 2 and Écotron to influence climate and understand how the carbon cycle changes as a result." The data collected is then fed into a network of models to obtain a global view of how entire ecosystems function, in an attempt to improve future climate projections. 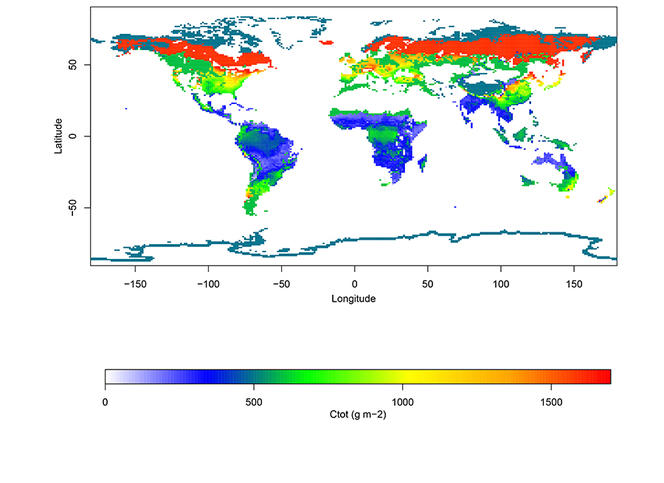 This modelization of terrestrial carbon stocks simulates the decomposition of organic matter. This model, which was configured based on observation and data from experiments on carbon cycles conducted at Biosphere 2 and Écotron at the CNRS, helps visualize the areas where carbon stocks will be the largest (in red). 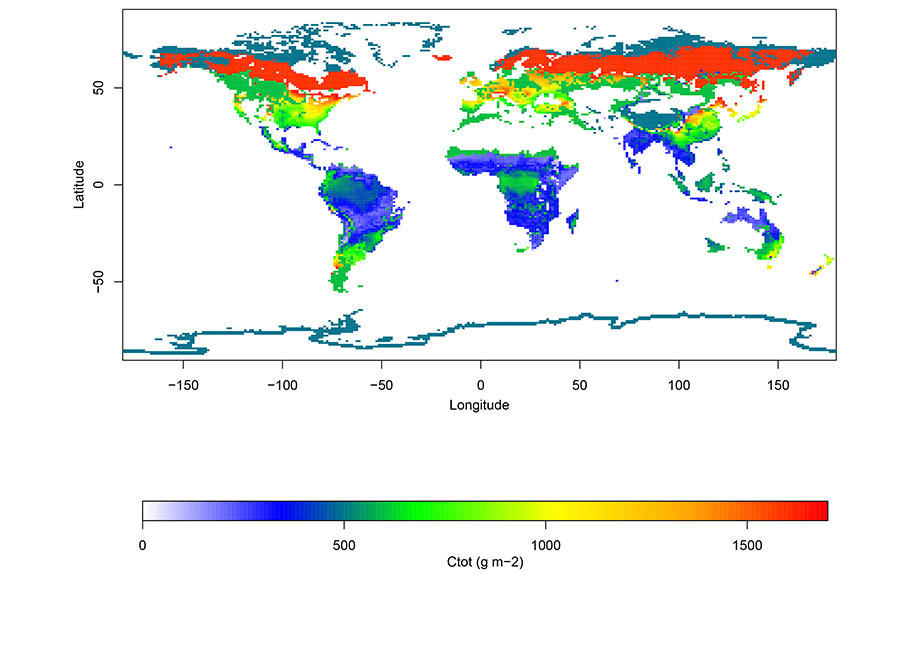 This modelization of terrestrial carbon stocks simulates the decomposition of organic matter. This model, which was configured based on observation and data from experiments on carbon cycles conducted at Biosphere 2 and Écotron at the CNRS, helps visualize the areas where carbon stocks will be the largest (in red).
Elsa ABS, Régis FERRIERE
Elsa ABS, Régis FERRIERE
Share
Share

A Platform Focused on the Future

A unique global center for scientific experiments, Biosphere 2 also enjoys a rich history, which inspired the researcher Brigitte Juanals, from the Centre Norbert Elias.3  She was a visiting researcher at iGlobes during the spring of 2018 and  is now conducting an analysis of how the organization's communications, coupled with the media attention it has garnered, contributed to defining its identity in our society. "The evolution of Biosphere 2 reflects major societal evolutions with respect to human interaction with their natural environment. I believe that the various aspects of Biosphere 2 can be approached by its role in the media landscape, as the media quickly took an interest in the project," Juanals explains. From its initial explorations that were concerned with conditions for human survival, then the preservation of species and later climate change, Biosphere 2 remains a platform focused on the future. Understanding its role in our society, and how it connects with the concerns of various periods, also helps us better understand what tomorrow holds in store.