Since 2013, the Étoiles de l’Europe (Stars of Europe) award has shined a light on European initiatives launched by French scientists. Rewarding both scientific expertise and the capacity to coordinate large international teams, this prize is given each year to twelve researchers and their respective projects. The 2018 edition, which was held on December 5 at the Musée du quai Branly — Jacques Chirac, included three CNRS members among its winners: André Gourdon and his nanometric gates, Sévérine Gomès for her work on measuring heat at the nanometric scale, and Ruxandra Gref for the use of nanoparticles to bolster antibiotics.

These three projects collectively received twenty million euros in financing from the European Union, that is to say over three quarters of their total budget. Since late 2013, Horizon 2020 (H2020) has served as the EU’s program for financing research and innovation. Intended to last for seven years, H2020 is drawing to a close having distributed 65 billion euros to a plethora of scientific teams and companies connected to innovation. Of the ninety billion euros earmarked for the H2020 program, fifteen have not yet been allocated.

Between ERC projects, which are centered on a researcher and his or her team, and broader international collaborations, the European Commission finances French scientists to the tune of approximately one billion euros per year. What’s more, 16 % of French projects that apply are selected, the highest success rate in Europe.

André Gourdon, a Senior Researcher at the Centre d’élaboration de matériaux et d’études structurales (CNRS), coordinated the PAMS1 project to help transition from microcomputing to nanocomputing. The project succeeded in designing logic gates—the elementary building blocks of digital circuits—that consist of just a few atoms or a single molecule, but that can nevertheless compute binary numbers. This subsequently enabled the replacement of certain transistors and diodes with nanometric equivalents, thereby further miniaturizing computing. Researchers accomplished this by digging a narrow trench in a layer of hydrogen grafted onto silicon, and then using atomic wires to transmit the electrons.
In all, eight teams collaborated from 2013 to 2017. “We worked a great deal on products that are too reactive to be prepared in a solution,” Gourdon adds. “We synthesized precursors to stabilize them, and then removed this protection once everything was in place on a chosen surface.” As a result, this research has expanded the range of nanometric equivalents for components in electronic circuits, once again with an eye toward the overarching goal of miniaturization.

Running counter to certain trends in which a well-known researcher surrounds him or herself with postdoctoral fellows on temporary contracts, Gourdon praises the principle of major European programs. “With PAMS we had many permanent employees who were genuinely engaged. That matches my vision of research: a collaborative project in which we convince the best European specialists to work with us. We give teams a boost, and enable everyone to work together.” In addition, he praises the management flexibility offered by European programs, and the possibility of developing ambitious, high-risk projects over the long term. Like Séverine Gomès, he also stresses the support provided by project managers in more calmly conducting such vast projects.

Étoiles de l’Europe also recognized Quantiheat,2 once again within the realm of the infinitely small. This project filled major gaps in the measurement of thermophysical values at the nanoscale. Since heat is a data point that is closely monitored during the design and use of materials of all sizes, the development of nanotechnologies is hampered by the lack of reliable information on the subject.

Under the leadership of Séverine Gomès, Senior Researcher at the Centre d’énergétique et de thermique de Lyon (CNRS/INSA Lyon/Université Claude Bernard), researchers have developed metrology tools and protocols based on scanning probe microscopy to analyze heat transfer at the nanoscale. This is a crucial step in obtaining materials that can isolate or dissipate heat on an infinitely small level. Twenty-one Quantiheat teams thus worked on the same test samples, which were specifically designed for the project.

“The lack of measurements was identified by the ‘Micro et nanothermique’ CNRS Research Network3  over ten years ago, yet it took until a 2012 conference in Spain for European industrial actors and research groups to join me,” indicates Gomès. “The project appealed to the European Commission, which financed it. As researchers it is not often that we feel supported, and this award offers both excellent recognition and encouragement.” 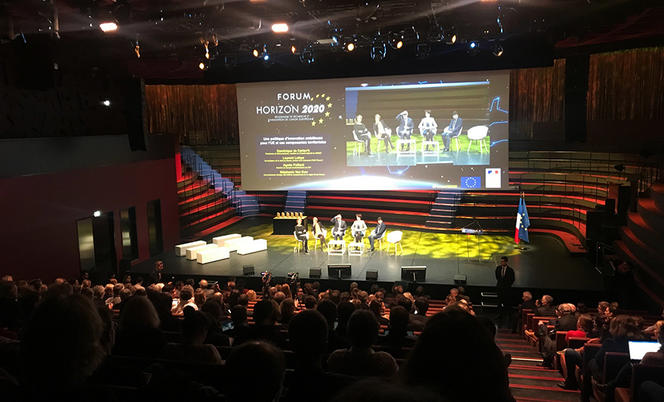 The 2018 edition of the "Etoiles de l'Europe" award ceremony was part of the yearly Forum H2020 event at the Quai Branly museum in Paris. 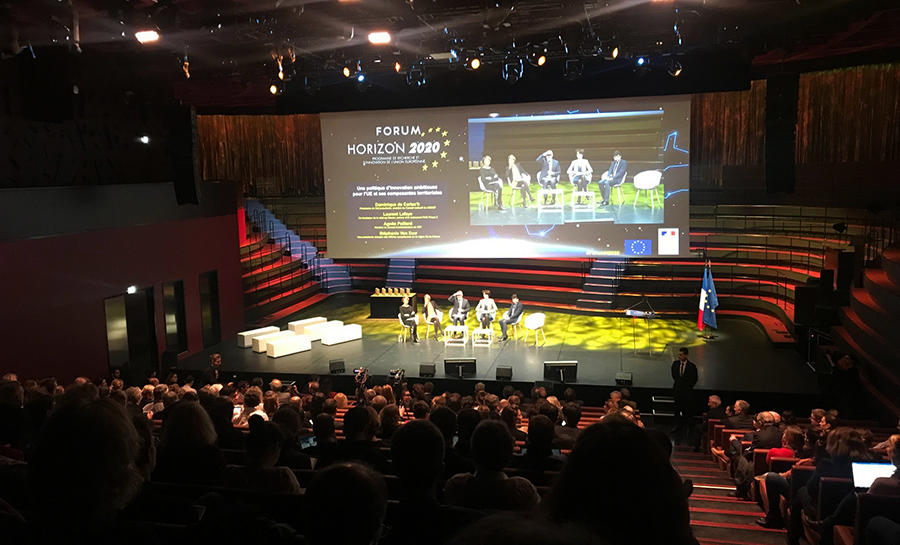 The 2018 edition of the "Etoiles de l'Europe" award ceremony was part of the yearly Forum H2020 event at the Quai Branly museum in Paris.
CNRS
CNRS
Share
Share

An Étoile de l’Europe was also awarded to Ruxandra Gref, Senior Researcher at the Institut des Sciences Moléculaires d’Orsay (CNRS/Université Paris-Sud), for her coordination of Cyclon Hit. The goal of this project is to increase the effectiveness of antibiotics and combat bacterial resistance to treatment.

Researchers essentially used organic molecules shaped like a cage, such as cyclodextrins, in order to protect antibiotics from degradation, increase their bioavailability, and reduce their toxic side effects. The “cage” particles acted as Trojan horses, reducing the bacterial load by a factor of a thousand among rodents infected by tuberculosis. Good results were also obtained against several other infections, such as those due to salmonella and staphylococcus aureus. A team even designed a “cage” nanocarrier that is endowed with an intrinsic antibacterial effect, besides its capacity to transport a synergic “cocktail” of active molecules.

“This project was extremely productive, with almost eighty publications, not counting those still ongoing,” says Gref with enthusiasm. “Most of the partners had already collaborated in another European project, CYCLON, on the treatment of cancer using nanotechnologies based on cyclodextrins. These many years have enabled us to establish strong and lasting cooperations.”