Valéria Nicolosi, an ERC-laureate, inaugurating in April 2016 one of the ten most powerful microscopes in the world (NION UltraSTEM) at Trinity College, Ireland.
AMBER, TRINITY COLLEGE DUBLIN
Share
Share
The European Research Council (ERC) celebrates its tenth anniversary this year. Acclaimed by the scientific community, the prestigious European research program can take pride in a nearly flawless track record.

Its founding divided scientific history into two eras: “before ERC” and “after ERC.” Before, the responsibility of funding exploratory research was not shared within the European Union. The only support available was for networks to promote cohesion or programs geared towards economic development. But that situation changed in 2007 with the Treaty of Lisbon, which made it an EU priority to develop a “society of knowledge”—and more cutting-edge research, an idea actively promoted in Brussels by several research lobbies. As a result, the European Research Council (ERC) was founded in 2007 with the mission of funding “science at the frontiers of knowledge,” inspired by the ideas of researchers from all disciplines. Scientists can apply for various types of grants: Starting Grants and Consolidator Grants for young researchers (respectively 2-7 and 7-12 years after completing their dissertation) and Advanced Grants for established researchers. The calls for projects are divided between 25 thematic panels in three disciplinary fields: the physical and engineering sciences: social sciences and the humanities; and the life sciences.

A breath of fresh air for European research

“It has been a tremendous success: for the first round of Starting Grants, the ERC received some 9,000 applications,” recounts French mathematician Jean-Pierre Bourguignon, who chaired the mathematics panel at the time and has presided over the ERC since 2014. Despite the program’s highly selective nature (with an average acceptance rate of 11%), enthusiasm continues unabated.

Indeed, who can resist the chance to secure a €1.5 to 2.5 million budget? Never before had such sums been offered for totally independent five-year research projects. The ERC came as a breath of fresh air for European research at a time when public budgets were being pared down to the minimum. “The ERC is pure oxygen for French research, as it enables scientists to think in the long term and pursue truly creative work,” says Bruno Chaudret, a 2015 Advanced Grant recipient and president of the CNRS Scientific Board.

For its fortunate grant recipients, the ERC is a game-changer. “Its support has been a real boost, both scientifically and in terms of career advancement,” reports Véronique Cortier of the LORIA,1 who received a Starting Grant in 2010. “It is also extremely worthwhile from a human point of view. I was able to set up a highly specialized team, and my work on electronic voting systems progressed by leaps and bounds.” Of course, this opportunity also involves a great deal of hard work and new responsibilities.

Beyond the benefits for individual recipients, the ERC has a collective effect. Project holders can organize their research as they see fit, forming their own team with an average of six co-workers (PhD students, postdoctoral fellows or more experienced researchers). In all, the 7,000 projects funded since 2007 have involved some 50,000 researchers throughout Europe. Furthermore, the universities, schools and research institutions that host the projects receive 25% of the total funding (“overheads”), which is far from negligible. “At the CNRS, we do our utmost to channel most of this sum back to the project in the form of laboratory resources,” notes CNRS Chief Research Officer Anne Peyroche. 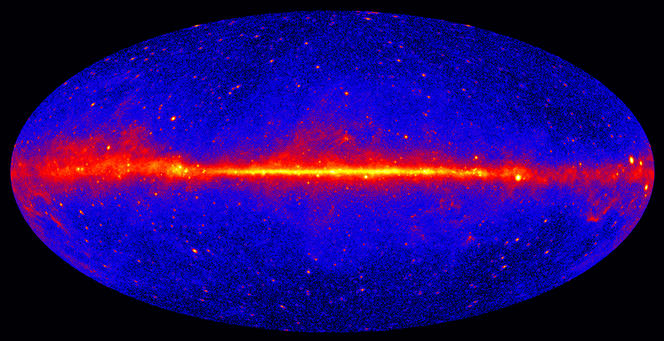 View of the sky captured by NASA's Fermi telescope. Marianne Lemoine-Goumard, winner of an ERC grant in 2010, uses this data to explore pulsar nebulae. 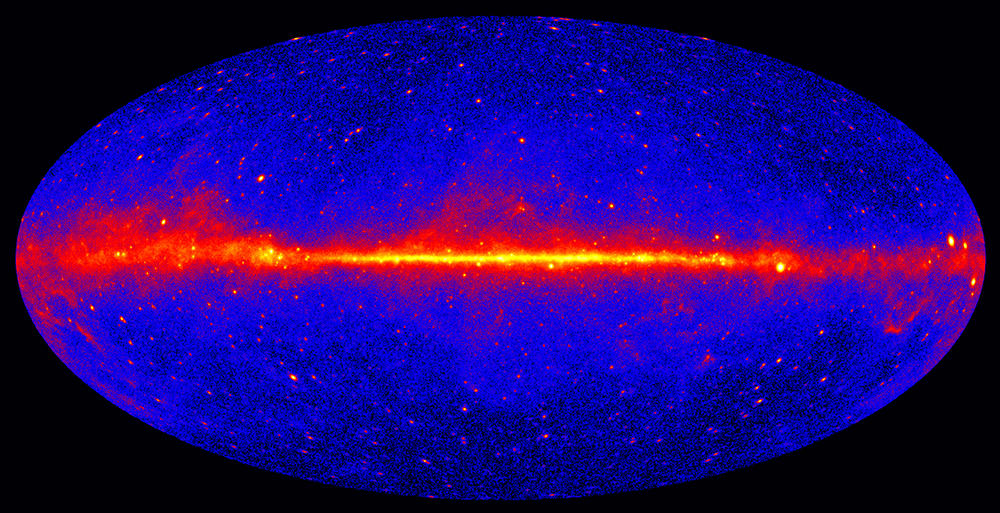 The results speak for themselves: in ten years, six ERC grant recipients received a Nobel prize and another three were awarded the Fields Medal. The Dutch scientist Ben Feringa, one of the three winners of the 2016 Nobel prize in chemistry, had obtained two Advanced Grants for projects on chemical molecular motors. In 2015, an initial evaluation of 200 completed ERC projects showed that 71% had led to scientific breakthroughs and significant advances in their respective fields. As Bourguignon points out, “basic research would more aptly be called 'exploratory', since 20% of the projects are applied or technological in nature.” Moreover, the grant applicants tend to focus on topics that address the pressing problems of our time, like energy and the migration of populations. “The ERC is funding 125 projects on energy, with particular emphasis on the various types of batteries, for a total of €250,000,” he adds.

To encourage this type of effort, the ERC’s Proof of Concept program allows researchers to explore practical applications for their work. This is the case of Valeria Nicolosi (Trinity College, Ireland), who sold the rights to a type of flexible battery stemming from her research on graphene to an industrial buyer. Another example is Ann Heylighen (University of Leuven, Belgium), who is thinking of new ways to improve disabled access to living areas, including the creation of a consulting service for architects, based on feedback from the people concerned.

Within the European Commission, the ERC’s mode of governance constitutes another innovation. Rather than reporting directly to the administration in Brussels, it is managed by a Scientific Council assisted by an Executive Agency. Of course, that does not exempt it and its grant recipients from meeting the Commission's requirements in terms of expenses! Nonetheless, the 22 scientists on the ERC Scientific Council have adopted a project evaluation process that is now a reference worldwide. “The Scientific Council is responsible for appointing the members of the panel—whose sole criterion for selection is scientific merit—from among the finest specialists in their fields,” Bourguignon explains. The ERC is also known for its commitment to open access, gender equality and scientific integrity. 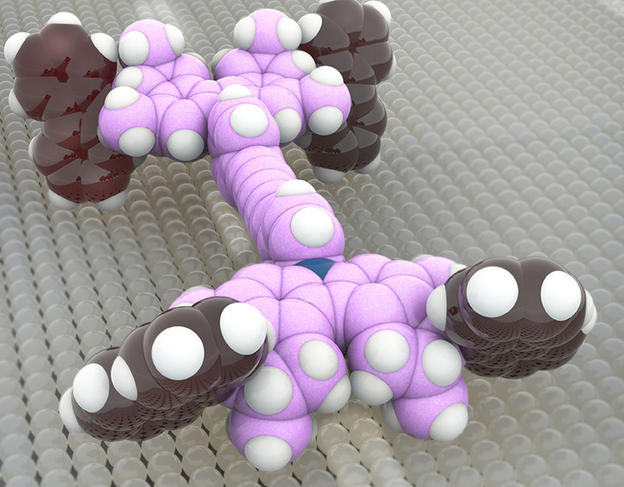 Ben Feringa, one the three Nobel Prize winners of chemistry in 2016, worked on this molecule car as part of his ERC projects. 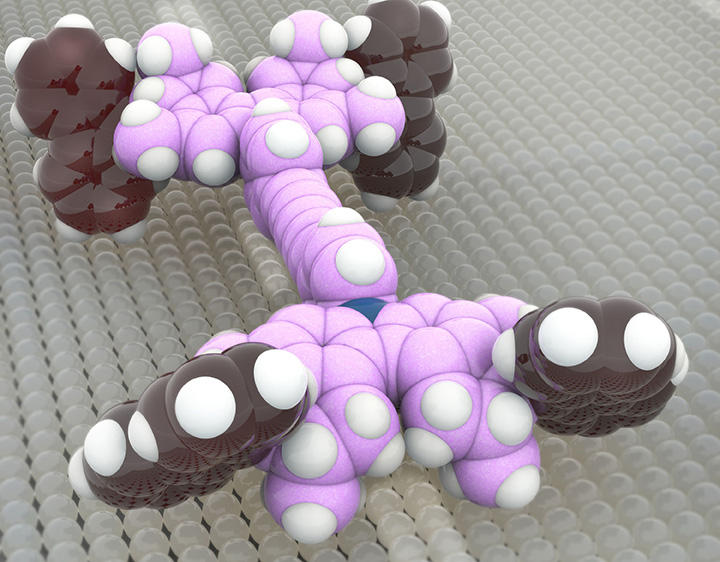 A budget to match

Keeping pace with the success of its program, the ERC’s annual budget has risen from €300 million in 2007 to €1.6 billion in 2016. “Today, the Executive Agency has about 450 employees managing 5,000 active contracts,” Bourguignon reports. Another achievement is the influence that the ERC has had on the organization of research around the world, with several countries adopting its model on the national scale. In France, the National Research Agency (ANR) recently introduced a program called Tremplin-ERC (“ERC springboard”) to fund researchers whose strong proposals were not selected by the ERC for lack of financial resources—and help them submit further applications.

The ERC's influence has changed the functioning of research. “Free from any institutional constraints, researchers are developing their own ideas, overthrowing the established order,” notes Philippe Roussignol, the ERC national contact point (NCP) in France. “We must bear in mind that one of the ERC's goals is to nurture a new generation of researchers with the leadership capacity to manage large-scale scientific projects.” This new context has elicited criticism of the program’s “elitism,” as well as its tendency to unintentionally disadvantage less charismatic personalities, larger collective projects (e.g. in particle physics) and countries providing less organized support for their applicants (mainly in Central and Eastern Europe). In addition, women researchers account for only 26% of all grant recipients, even though they have been more successful than men at Consolidator and Advanced Grants since 2015. Lastly, the emphasis placed on project holders has in some cases revived the debate surrounding the policy of excellence. As far as the CNRS is concerned, “the ERC is one form of excellence among others," Peyroche asserts. "Many of our researchers are raising fundamental questions and taking science forward. Which is, after all, what really matters.”

Given its overall performance, the future of the ERC could look safe. Yet in 2015,  the EU Commission attempted to slash its budget as part of the Juncker Plan. It ultimately backed down as a result of the outcry from the scientific community, supported by institutions such as the CNRS and Max Planck Gesellschaft. In fact, other ideas have been put forward to change its status to an intergovernmental organization or independent foundation, a structure integrated into the EU Commission, etc. Hence the ERC president’s caution at a time when ongoing research programs are being re-assessed halfway through, and the next EU Framework Programme is being developed: “In ten years, the ERC has become indispensable in Europe, yet we cannot take anything for granted. The goal, of course, is to consolidate our funding and independence—especially administrative—in order to improve the organization's efficiency and increase the number of its beneficiaries in Europe.”

Discover the new website "The CNRS and the ERC". It features testimonials of past laureates and compiles useful resource for researchers who wish to apply for grants.

0
Yves Meyer, an Exceptional MathematicianPrevious
River Seine: Preparing for the Flood Next