The difficulties associated with orientation in space are the same in real life as in the virtual world.
dusanpetkovic1 /Stock.Adobe.com
Share
Share
Sea Hero Quest is a video game created by neuroscientists to measure orientation abilities in space. Impairment of this capacity can actually be a sign of Alzheimer's disease. The huge success of the game enabled researchers to gain access to the results achieved by four million people across the globe, a first for a study of this type.

In medical research, the volunteer 2.0 is a far cry from the former cliché of the human guinea pig: at home or on public transportation, they now use a Smartphone… to play a video game — as it happens, Sea Hero Quest. Whether in its traditional or virtual reality version, this free game presents a number of navigational and orientation challenges to a ship's captain. Yet in this fictional world, the player's performance doesn't just serve to progress through the game's levels, but is also carefully recorded and transmitted, with the participant’s consent, to a team of neuroscience researchers specialising in the detection of Alzheimer's disease.

The scientists involved, who are part of the Laboratory of Digital Sciences of Nantes (LS2N),1 University College London and the University of East Anglia in Norwich (UK), have access to the giant database generated by the four million players of Sea Hero Quest. For Antoine Coutrot, a researcher at the LS2N, the primary objective was precisely to establish the largest catalogue as possible. "In the scientific literature for neuroscience, cohorts contain between 50 and 100 candidates when things go well," Coutrot laments. "For our study on Alzheimer's, we wanted to reach planetary scale." This was meant to avoid one of the primary pitfalls of current studies, whose reproducibility is often tricky, as "results vary too much when measurements are made again on other people," he explains. 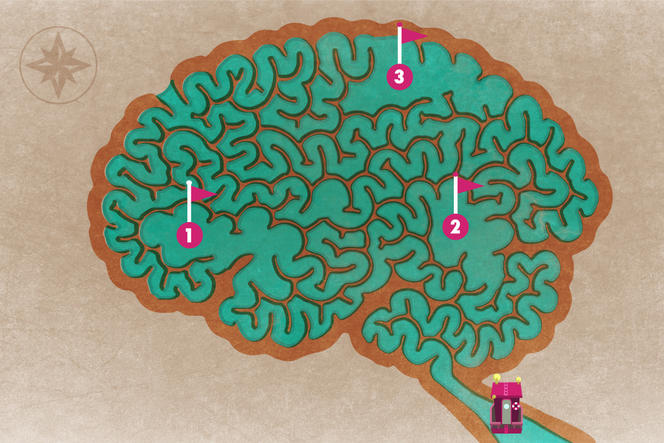 After memorising the map for each level, players must navigate as quickly as possible towards the buoys (points 1 to 3). 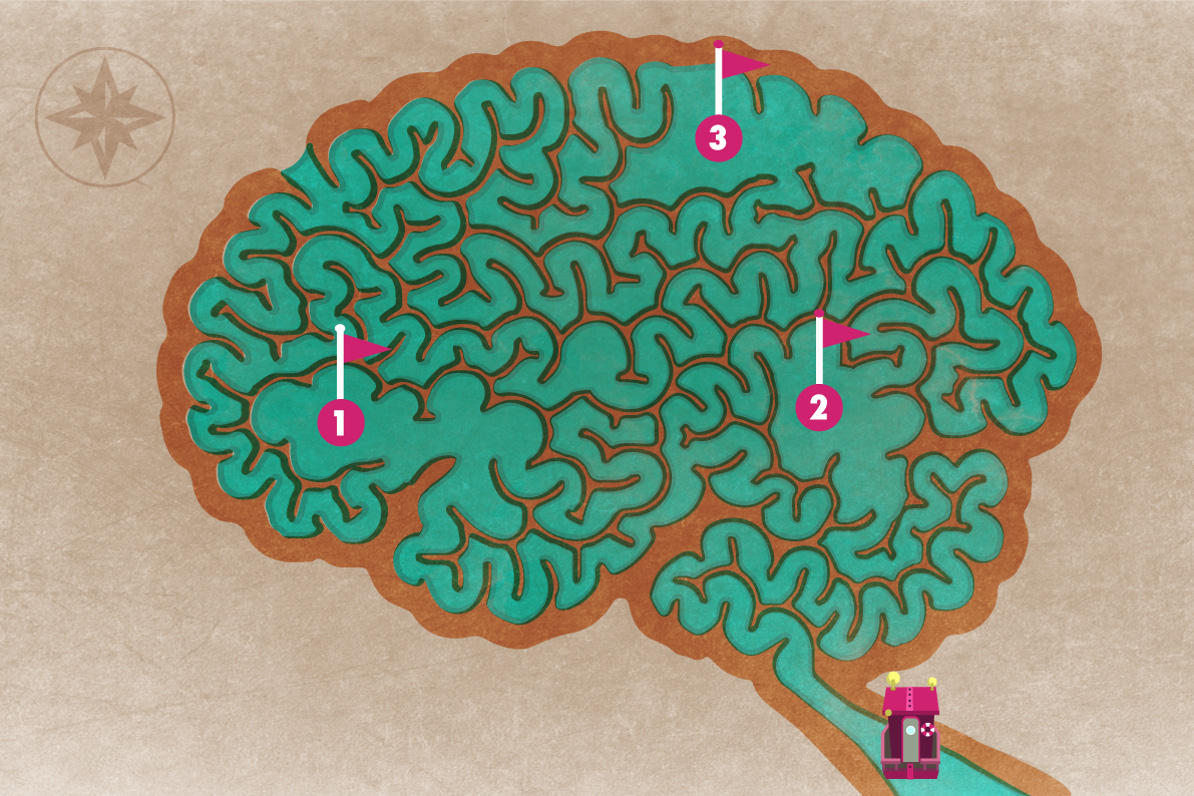 After memorising the map for each level, players must navigate as quickly as possible towards the buoys (points 1 to 3).
Diana QUACH
Diana QUACH
Share
Share

The initiative came in 2015 from the company Deutsche Telekom, which contacted University College London, where Antoine Coutrot was conducting postdoctoral research, and the University of East Anglia. The researchers quickly realised that in order to attract as many people as possible, they couldn't design the game themselves. They therefore called on a professional developer, Glitchers, which already had multiple mobile games to its name. Through a few months of exchanges, tasks and exercises derived from the scientific literature were integrated in an entertaining and pleasant way.

"The game was released in May 2016, and was available for free on Apple Store and Google Play," Antoine Coutrot points out. "We were expecting to have a few thousand players. There were actually hundreds of thousands, and later millions. Quite a nice surprise!" The researchers subsequently extracted the orientation performance of four million individuals, which they then cross-referenced by age, gender, and country. To prevent any risk of bias resulting from playing video games on a regular basis, the researchers asked a team of volunteers to engage in orientation exercises in the streets of Paris and London, and then ensured that the performance coincided with the results from Sea Hero Quest.

A first round of results, published in 2018, showed that age was a major factor in orientation skills, apart from Alzheimer's: our ability to orient ourselves decreases with age. Then came gender, and finally background. "Nationality has an impact that is highly correlated to each country’s GDP:  education and opportunities to travel inside and outside of one's country influence the way individuals orient themselves in space," emphasizes Antoine Coutrot. "Similarly, the better performance of men, often observed in the literature, depends on the degree of gender equality in the country under consideration. The differences are highly pronounced in Egypt and Saudi Arabia, but virtually disappear in Scandinavia. The importance of culture and society on spatial orientation could not have been measured without a data set of this scope." 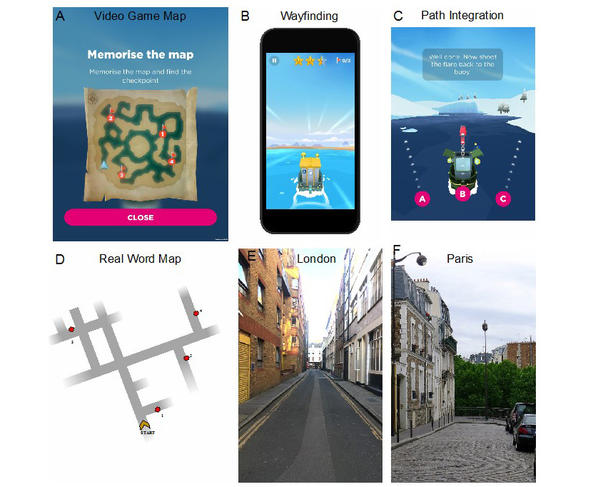 A group of volunteers had to memorise a map and navigate through a labyrinth, first in the game and then in the real world, in order to confirm that the capacity for orientation was similar in both worlds. 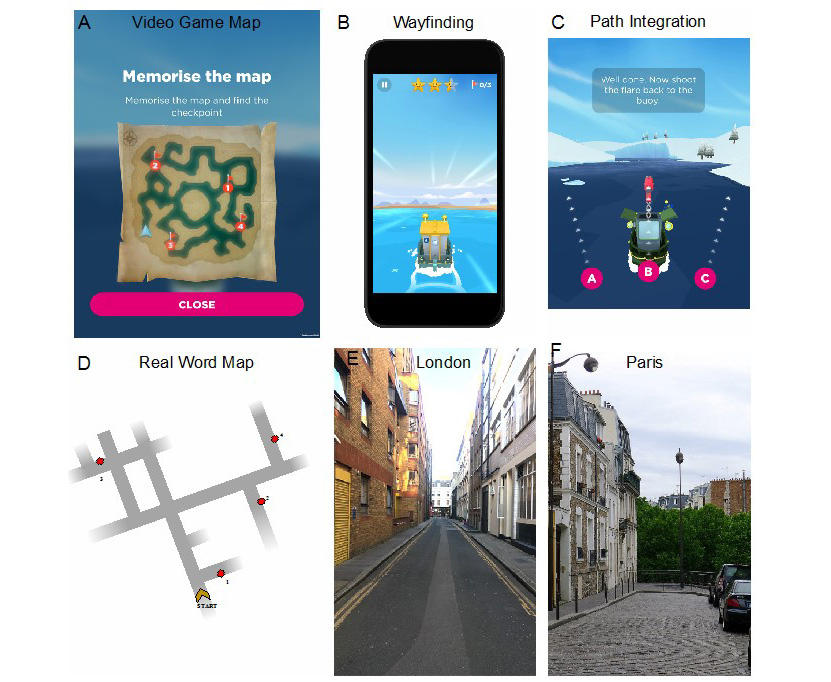 The second round, focusing on Alzheimer's, has just been published in the journal PNAS. The researchers compared the results of Sea Hero Quest with the early symptoms of Alzheimer's disease. Their conclusion is that people faring poorly compared with individuals of the same age, gender, and background are more prone to Alzheimer's disease, even when traditional tests do not detect anything.

They especially have a higher chance of carrying allele 4 of the apolipoprotein E (ApoE), which quadruples the risk of developing Alzheimer's, and is present among approximately 20% of the population. While the game is not intended to serve as a screening tool, its database could provide a reference to doctors during diagnosis. If an elderly woman has trouble with orientation, this could help determine whether these difficulties are normal for her demographic group, or if they are cause for concern.

Artificial intelligence to the rescue

Today the researchers are continuing to use this huge stock of data, which triggers the interest of other laboratories, prepared to collaborate. "Impaired orientation can be measured in diseases other than Alzheimer's," Antoine Coutrot explains. "It is connected to areas in the deep brain related to memory, such as the hippocampus. We are exploring the list of cognitive abilities and diseases that can be quantified in this way, such as epilepsy or post-traumatic stress disorder." Because this work requires the help of artificial intelligence (AI), the scientist is currently working on machine learning. The goal is to train algorithms to identify groups of individuals at-risk, aside from the most obvious cases, such as the elderly. AI could also determine whether seemingly different groups share certain behaviours, and attempt to understand why. This goes to show that even for researchers, it is difficult to orient themselves alone amid the data of four million land dwellers...