Home / Articles / A new rover to land on Mars

A new rover to land on Mars

Home / Articles / A new rover to land on Mars

A new rover to land on Mars

While Mars remains an inexhaustible source of inspiration for Hollywood films, it equally fascinates NASA, which has made its exploration a priority. Since the early 2000s, the US space agency has successfully carried out eight missions1 designed to study its geological and climate history. The next step in this programme is the upcoming launch from Cape Canaveral of a massive Atlas V rocket carrying the Perseverance rover on a new mission dubbed Mars 2020, which will land on the Red Planet on 18 February 2021.

Packed with cameras and high-tech scientific instruments, the rover, approximately the size of a car, aims to answer the question that has been nagging the astrophysics community ever since the early days of Martian exploration: could Mars have once been home to life? “After focusing on the presence of water on the planet and on its habitability, Mars 2020 marks the third and latest step in a series of missions, and will be primarily dedicated to the search for signs of fossil life," says Sylvestre Maurice, an astronomer at the IRAP2 in Toulouse (southwestern France). With the support of around 200 scientists, engineers and technicians from several CNRS and French university laboratories,3 the scientist helped develop the SuperCam laser camera, one of seven scientific instruments carried by the Perseverance rover. Based on many of the features of the Curiosity rover’s ChemCam deployed on Mars in 2012, SuperCam was enhanced with new functionalities such as Raman and infrared spectrometers. “These techniques, the first of their kind to be used on the Red Planet, can identify bonds between atoms and the way in which molecules are organised. As a result, they are able to detect complex structures favourable to the preservation of biosignatures in SuperCam’s targets,” he explains. 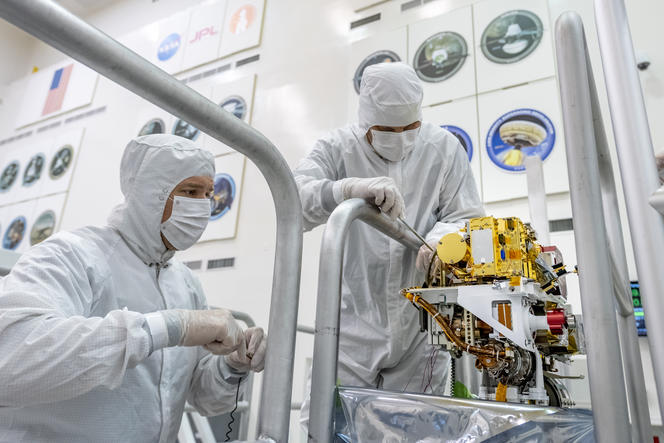 Engineers install the SuperCam instrument on the Perseverance rover at NASA's Jet Propulsion Laboratory (JPL) in Pasadena, California on June 25, 2019. 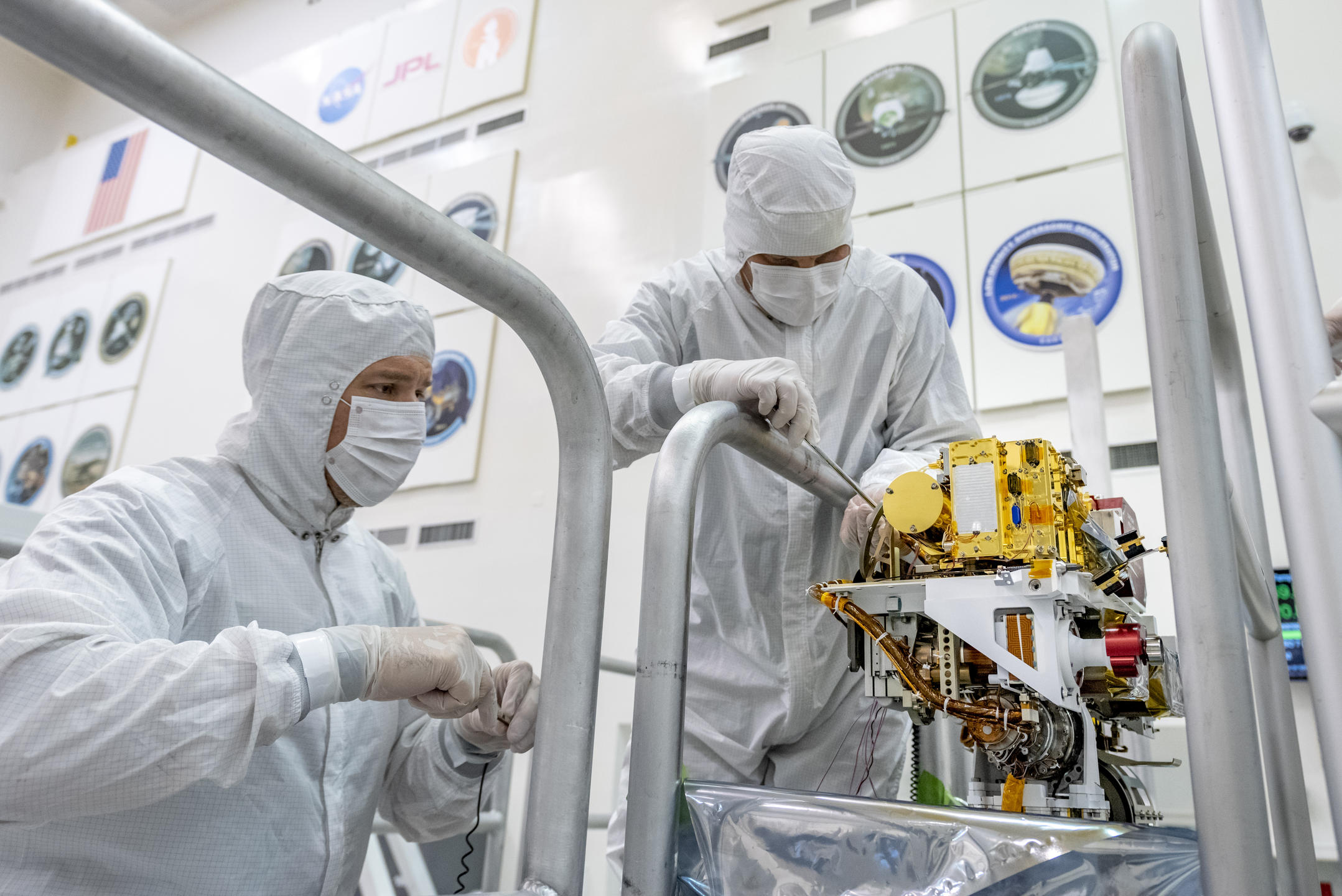 Landing on an ancient lakebed

To maximise their chances in the search for Martian biosignatures, the Mars 2020 team chose the Jezero crater as their landing site. Approximately 3.5 billion years ago, this area, 45 kilometres in diameter, was home to a vast lake to which several rivers converged, forming deltas whose remains are still visible today.  The very early presence of water, together with extensive sedimentary deposits, makes Jezero a particularly promising environment for the detection of traces of life. The site also includes a wide range of geological features, which will help Mars 2020 achieve its other primary goal, namely the collection of some thirty soil core and rock samples reflecting the geological diversity of the planet. “Once the samples have been enclosed in metal tubes kept inside the rover, they will be sealed and stored on the Martian surface, and eventually brought back to Earth during a future sample return mission scheduled by 2030,” Maurice explains. 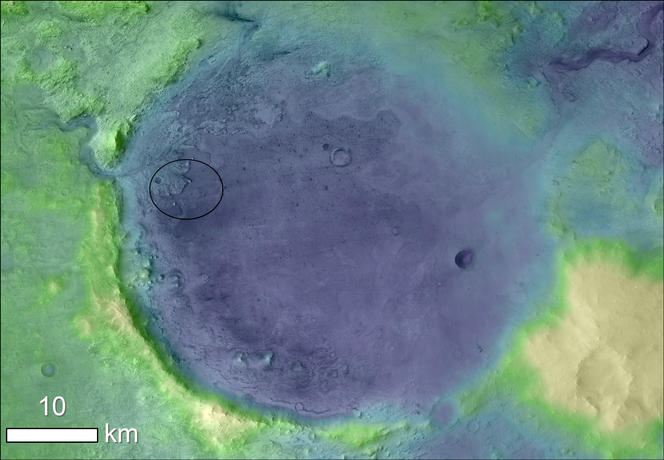 View of the Jezero crater, the landing site chosen for the Mars 2020 mission. 3.5 billion years ago, this area housed a large lake and traces of fossilized microbial life may have been preserved there. 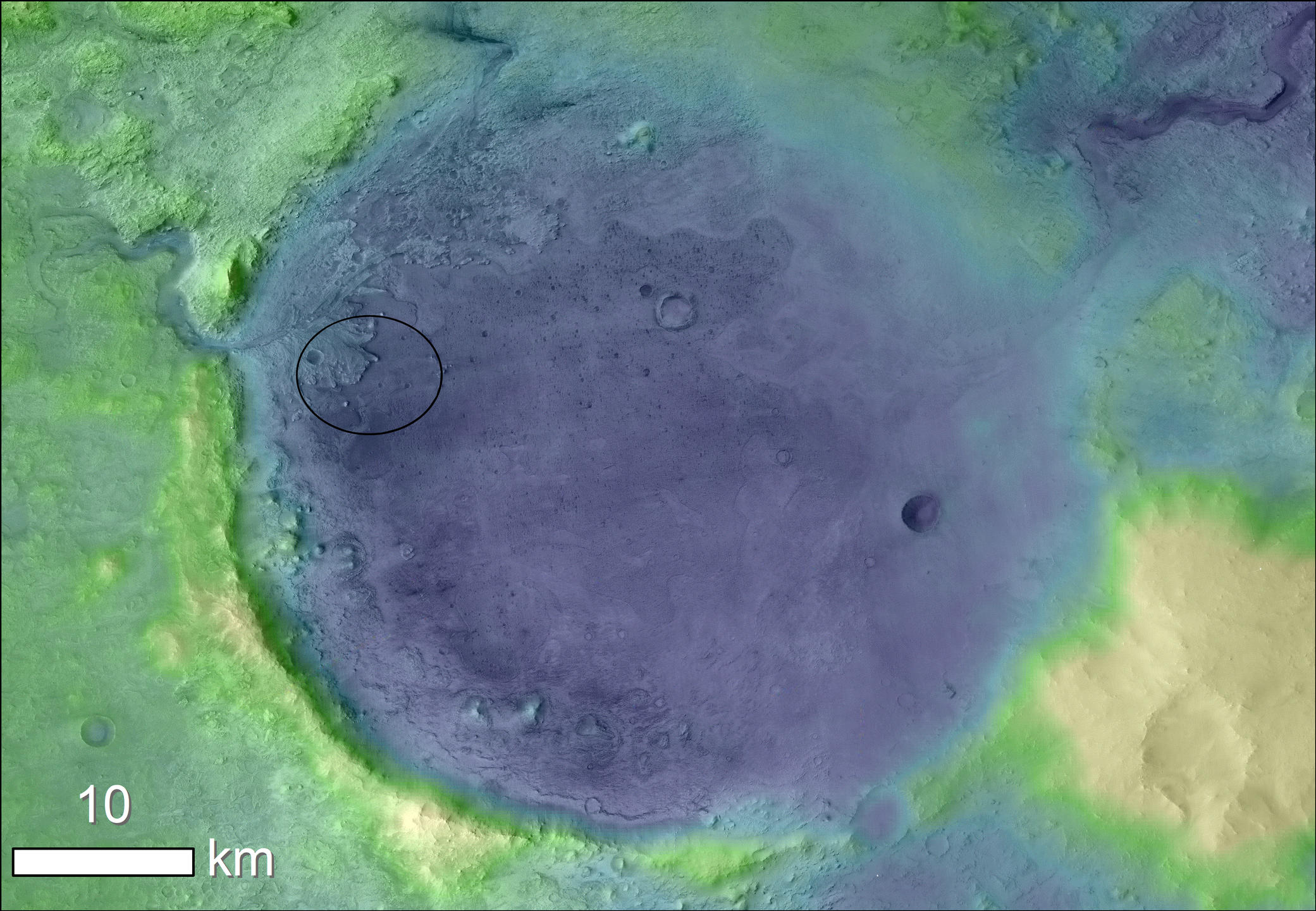 This unprecedented sampling operation will be carried out using the SuperCam instrument. Its high-resolution colour camera attached atop Perseverance’s mast will make it possible to accurately determine the geological and environmental context associated with each sample of rock or regolith thanks to the analysis performed by the instrument's three spectrometers.4 In addition, SuperCam will be the very first scientific instrument sent to Mars to be equipped with a microphone. “By listening to the impact on the rocks each time the laser is fired, this system will provide information about the hardness of the geological samples targeted,” Maurice says. “The device will also be used to pick up the sound of the Martian wind and detect possible signs of wear and tear to the equipment by continuously recording the noises made by the rover.” 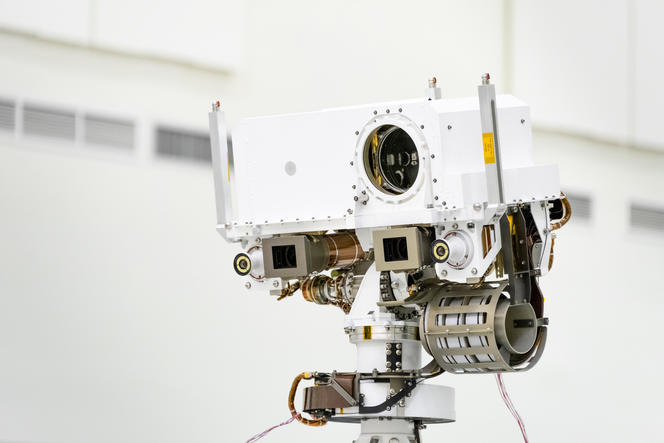 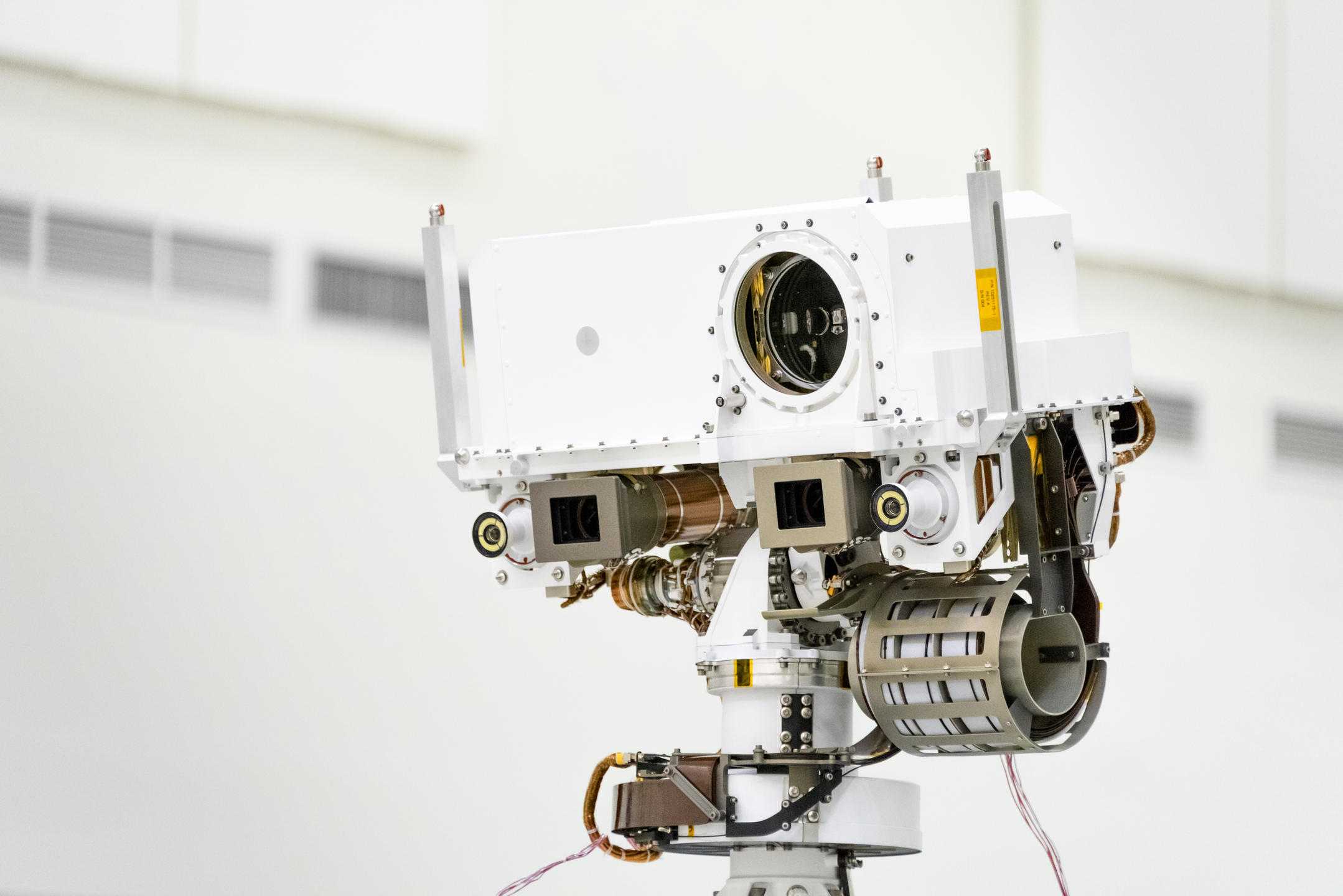 Filled with cutting-edge technology, the SuperCam laser camera took five long years to develop by several French research laboratories. “Although from the outside the instrument looks like Curiosity’s ChemCam, which our team had previously helped to design, it contains three additional analysis technologies packed into exactly the same volume. This required the miniaturisation of numerous components,” explains Pernelle Bernardi, a systems engineer at the LESIA,5 in charge of the specifications and performance of the SuperCam. This was a major challenge that the French team met with flying colours. However, just as the production of the flight model to be mounted on the rover neared completion, things went badly wrong when the optical component of the instrument was being tested inside a heat chamber in November 2018. The temperature rose to nearly 250 °C, well above the acceptable limits, quite literally “roasting” the instrument. 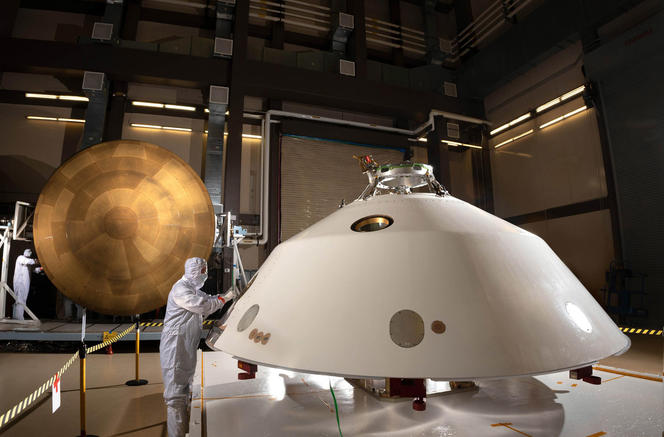 The heat shield (left) and rear hull (right) will protect the rover to its final destination. 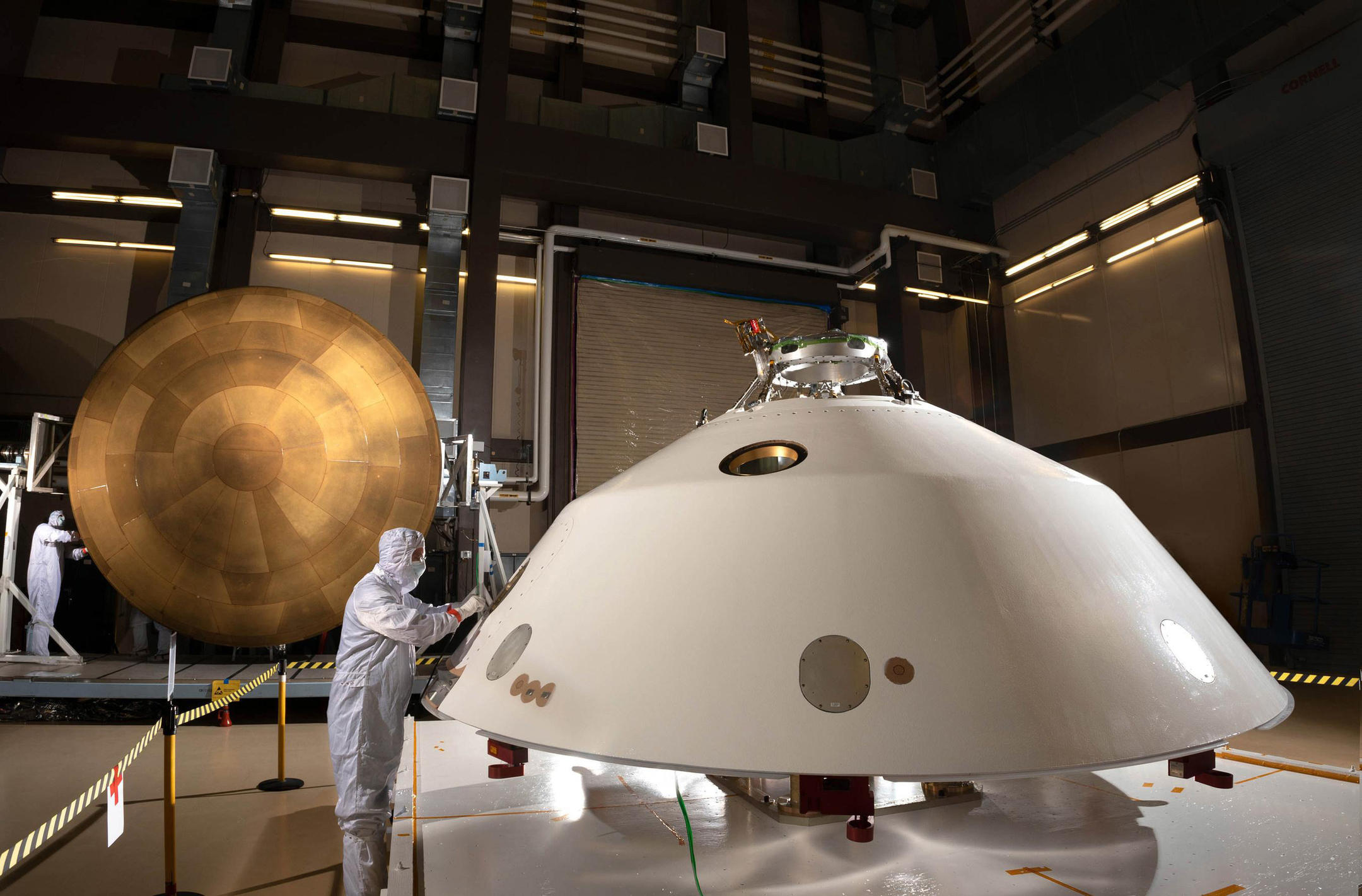 The heat shield (left) and rear hull (right) will protect the rover to its final destination.
LMS
LMS
Share
Share

Following a crisis meeting with US mission officials and representatives from the French space agency, CNES,6 the decision was taken to rebuild the entire laser camera, using all the available spare parts. The French team worked flat out, day and night, and rebuilt the instrument in six months, even managing to enhance its performance. “The primary mirror of the first SuperCam’s telescope had a tendency to deform when cold, which resulted in a significant widening of the focus point of the infrared laser beam,” Bernardi explains. “The November 2018 incident therefore gave us the opportunity to replace this defective mirror and thereby significantly improve the laser shot.”

Completed in June 2019, the upgraded version of the SuperCam was then shipped to NASA's Jet Propulsion Laboratory in California in order to be attached to the top of the rover mast. “We visited the site several times last year to ensure that the instrument's laser beams were still perfectly aligned during tests carried out in an environment very close to that of Mars, and it was indeed the case,” says Bernardi, who was awarded the CNRS 2020 Crystal Medal for her key role in the construction of the device. A few weeks before the Covid-19 crisis broke out, the fully-assembled rover had reached the Kennedy Space Center at Cape Canaveral and was docked to the descent vehicle. It was then placed in the capsule that will enter the Martian atmosphere, this structure being itself attached to the cruise stage, which will fly the entire system to its final destination. Sheltering behind its heat shield, Perseverance is now waiting for the green light from NASA to begin its long journey to Mars.

See author's bio
How the brain manages our appetitePrevious
COVID-19: Sniffer dogs to the rescue? Next