Wastewater treatment plant.
Uzfoto/Stock.Adobe.com
Share
Share
Testing sewage for Covid-19 could help predict future outbreaks. The Obépine project, which analyses wastewater, could use the concentration of the virus in human faeces to develop an early alert system in France.

On 5 March 2020, only ten Covid-19 cases had been detected in Paris. And yet, the new coronavirus was already present in the city’s sewers. If someone had analysed the wastewater back then, they would have known the low number of positive cases was misleading and that Paris was already in the midst of a crisis, with hospital admissions soon going to soar.

That month, with health services near breaking point, the concentration of the virus in the city’s wastewater had multiplied by more than a hundred until, in early April, the number of cases fizzled out and began to decline rapidly. In the matter of weeks, it dropped to a thousand times lower than during the peak. The drastic confinement measures imposed by the authorities had successfully stopped the spread of the epidemic.

Presented in April, prior to publication, by a consortium led by the R&D division of Eau de Paris, the city’s water management service, these conclusions demonstrated the usefulness of wastewater in tracking SARS-CoV-2 levels and pointed to the possibility of an early-warning system. Developing such a system is the purpose of the Obépine project which brings together several laboratories,1 with the support of the French Ministry of Higher Education, Research and Innovation (MESRI).

The programme aims to use samples from different water treatment plants to monitor the presence of the virus across France and to forecast its spread. Due to the urgency of the crisis, it had to hit the ground running. According to Christophe Gantzer, deputy director of the Laboratory of Physical Chemistry and Microbiology for the Environment (LCPME)2 in Nancy (northeastern France), data from 30 French cities is now available, and the network is expanding with the addition of new water treatment providers. Starting this autumn, Obépine will centralise information from some 150 sewage plants.

Getting ahead of the virus

According to Yvon Manday, a researcher at the Laboratoire Jacques-Louis Lions3 and director of the Carnot Smiles Institute, the virus can be found in human faeces three to four days before the onset of symptoms in approximately 50% of those infected. This tracking method is interesting because the increase of the virus in wastewater foretells a rise in hospitalisations. The crisis has shown the importance for hospitals to stay one step ahead of a sudden flood of patients. A mere 48 hours can be enough for medical and logistics teams to prepare for the onslaught, which Obépine could enable.

In the race against a much-dreaded second wave of infections, the project will assist the authorities in their decision making. Do bars and restaurants need to close in one city, should testing be stepped up in another, and a third be locked down? The project will provide information that will help find the most suitable response to each situation.

Should a worrying trend be observed in a town or region, Obépine will increase wastewater testing and collect samples upstream of sewage plants, enabling researchers to map affected areas and follow the progression of cases more easily. 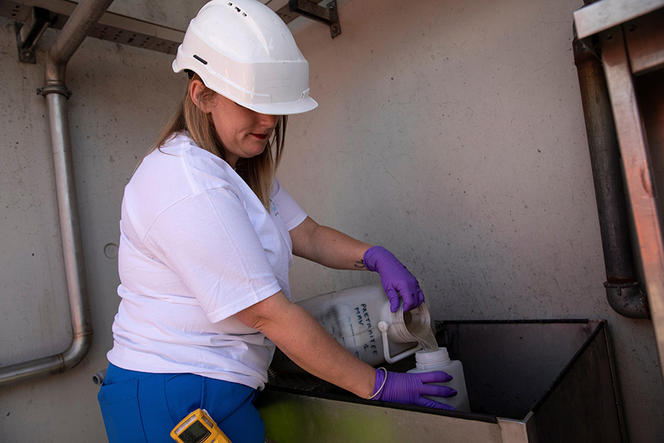 Testing at a water treatment plant (July 2020, Noisy-le-Grand, near Paris). Researchers from the Obépine project are seeking to forecast Covid-19 outbreaks by measuring the concentration of the SARS-CoV-2 virus in wastewater. 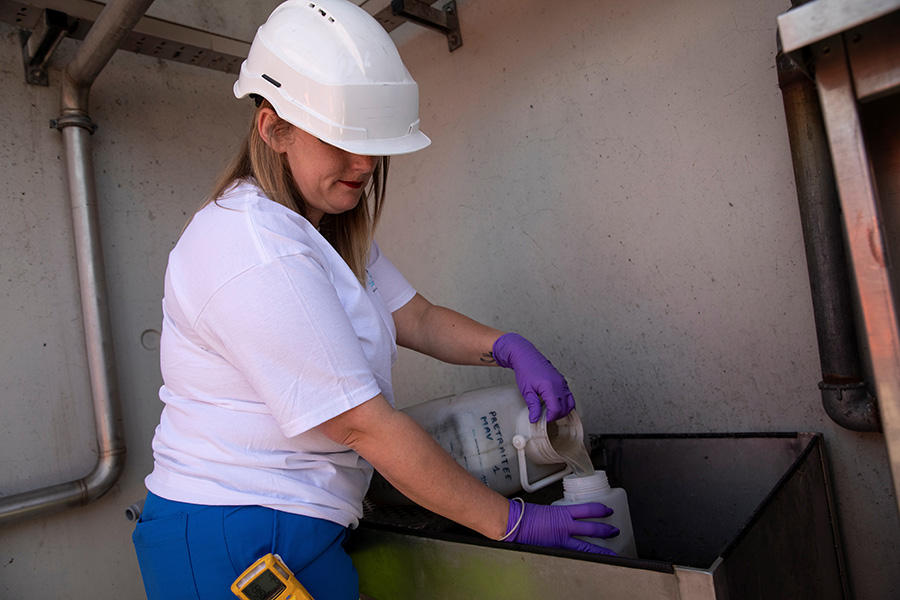 Testing at a water treatment plant (July 2020, Noisy-le-Grand, near Paris). Researchers from the Obépine project are seeking to forecast Covid-19 outbreaks by measuring the concentration of the SARS-CoV-2 virus in wastewater.
Thomas SAMSON / AFP
Thomas SAMSON / AFP
Share
Share

The scheme originated from the unlikely collaboration between the LCPME, the laboratoire d’Eau de Paris, and the LMGE4 in Clermont-Ferrand (central France). In March, independently from one another, each team proposed a water analysis project to the government's “CARE” Covid-19 research coordination task force.5

Seeing that the proposals were very similar, the task force instructed them to get together and make a joint submission. All under lockdown and speaking through video conference, the confined scientists harmonised their approach and methodology. “We grouped our projects in order to gain a more representative geographical coverage. In one weekend the project was ready,” said Jean-Luc Bailly, a researcher at the LMGE. This is how the Obépine project got off the ground.

The mission got the green light in early July to roll out the network in the autumn 2020 in tandem with the French Ministry for Solidarity and Health, the Ministry of the Interior, and the Ministry for Ecological Transition. Researchers hope the sampling, analysis, processing and presentation of data protocols will be ready in the next two to three months, just in time for winter and the subsequent risk of an increase in cases.

Dealing with the diluting effects of rain water

The project involves Obépine receiving at least two weekly samples from partner water treatment plants, each of which uses an automatic system that collects half a litre of water over 24 hours and places it into a refrigerated container destined to be sent off to an Obépine laboratory. Filters and centrifuges are then used to concentrate micro-organisms in the sample, which in turn will be tested using the PCR method which will make it possible not only to detect SARS-CoV-2, but also measure the concentration of genomes per litre.

Once the data has been gathered, the scientists process the information, all the while being confronted with several challenges. Heavy rainfall over a city, for example, can dilute the wastewater and therefore lower the concentration of the virus. The Obépine teams are working on two main workarounds aimed at refining their methods. The first is looking to lower the detection threshold of the virus in wastewater, which now stands at 400-500 genomes per litre. According to Bailly, the lower the threshold, the quicker the authorities can be alerted. 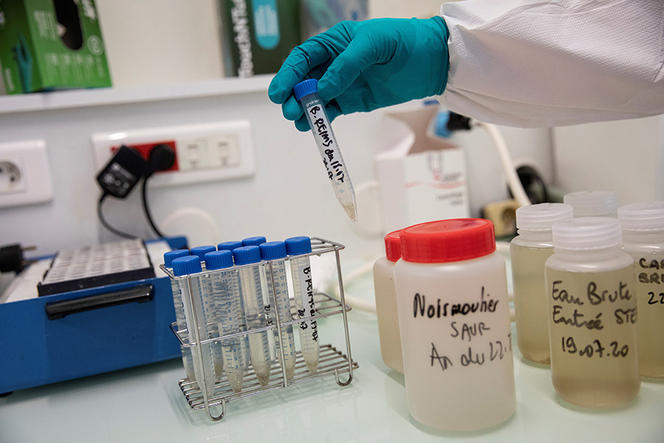 A wastewater sample used to detect the virus (Eau de Paris laboratory, July 2020, Ivry-sur-Seine, near Paris). Refinements to the method are in the pipeline to better estimate the number of people infected in a given location. 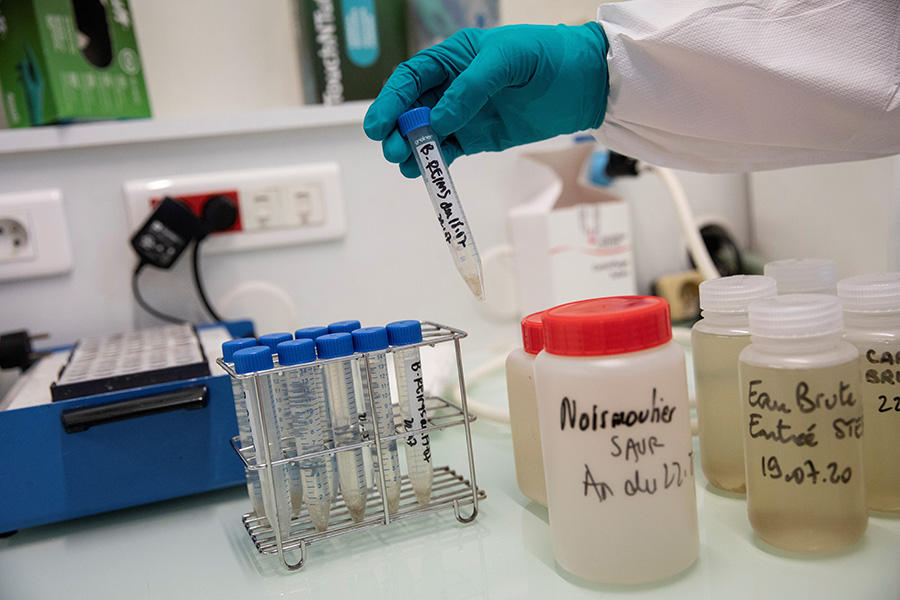 A wastewater sample used to detect the virus (Eau de Paris laboratory, July 2020, Ivry-sur-Seine, near Paris). Refinements to the method are in the pipeline to better estimate the number of people infected in a given location.
Thomas SAMSON / AFP
Thomas SAMSON / AFP
Share
Share

The second is looking to infer the number of infections in a given location from the medium concentration of the virus in the water. “We are looking to complete in a few months what would normally take four years of research,” says Maday.

A water sample “library” for future use

According to the researchers, Obépine will still have its uses when Covid-19 is finally under control, as it  touches on new fields of research, such as wastewater epidemiology. This discipline, at the interface of medicine and environmental science, was successfully used in the fight against polio. According to Gantzer, the virus that causes polio has practically been eradicated due to vaccination. During the fight against the disease, in order to check if a country was free of polio, wastewater was analysed. This method has been used for 30 years, prompting the teams to apply it to the coronavirus.

Wastewater can help detect other pathogens too. Laboratories taking part in the Obépine project have also analysed it for the presence of viruses that cause hepatitis and gastroenteritis, outside of a formalised surveillance structure such as the one surrounding SARS-CoV-2. These analyses are also able to detect what humans consume, whether legally or not. Levels of illicit drugs and medication can also be traced in wastewater. With its network of some 150 water treatment plants, Obépine could lead to a wide array of epidemiological studies. Anything found in wastewater could therefore be studied over time and across the country.

The researchers are proposing to set up a wastewater “library” in which the frozen samples collected could eventually constitute a historical archive for scientific research. Should a menacing new pathogen appear, it could help go back in time to determine when it appeared and understand its spread. Such a library would have been invaluable during the present crisis.
Beyond today’s fight against Covid-19, Obépine could become a permanent structure and a unique tool in epidemiological research to help prepare for future health emergencies.

Sebastián Escalón
See author's bio
New tools to help “predict” forest firesPrevious
Is there a point of no return in ecosystems?Next