The forest of Fontainebleau is home to rock art treasures

The forest of Fontainebleau is home to rock art treasures

It is a unique prehistoric heritage. A genuine treasure trove only a suburban train journey away from Paris. In a 1 800 km2 area stretching from Nemours to Rambouillet, the Fontainebleau Massif is home to over 2 000 engraved rock shelters hidden among its eroded sandstone boulders. Some of this rock art dates back to 20 000 years ago, and is attributed to Cro-Magnon humans. However, most of the engravings have been dated to the 8th millennium BC, in other words to the Mesolithic period. This was the age of the last hunter-gatherers, just before the Neolithic revolution. It is a period that archaeologists still have much to learn about, and that the Fontainebleau site could help to shed fresh light on. Yet before then, much remains to be clarified about the dating and significance of these puzzling engravings, which are essentially made up of repetitive geometric patterns.

It is with this goal in mind that Boris Valentin, professor of archaeology at Université Paris 1 - Panthéon-Sorbonne, and a member of the prehistoric ethnology team at the ArScAn laboratory,1 has been conducting a mission in this area of the Paris region since the spring. The prehistorian heads a team of researchers from various backgrounds and disciplines, all driven by the desire not only to gain a better understanding of this enigmatic rock art, but also to preserve it. They have six weeks in which to meticulously examine some twenty rock shelters, and have begun their campaign with one of the most remarkable of them, the “Grotte à la Peinture” the Painted Cave.

Entrance to the Grotte à la Peinture, in the forest of Fontainebleau.

To get to it, a suburban train takes you from Gare de Lyon in Paris, to Nemours Saint-Pierre. After a ten-minute drive through charming little villages into the forest of Fontainebleau and past the Dame Jouanne, a well-known spot popular with outdoor rock climbing enthusiasts, you're nearly there.

At the edge of the forest, in a maze of rocks, oaks, ferns and Scots pines lit by a sun that's already warm for the season, Valentin and his team of four young researchers meet up and take stock of the equipment they'll need: trowels, notebooks, cameras, spotlights, bread, Camembert and chocolate, they’ve got everything . And today's research site is only a ten-minute walk away.

“These engraved rock shelters were mainly discovered by volunteers,” the cheerful, bespectacled 56-year-old professor tells me as we set off. “In 1975, after some 450 shelters had been inventoried, the GERSAR group for the study, research and protection of rock art was set up. Forty-five years' exploration of the forest have since enabled its members to discover another 1 500 or so. They continue to search the Fontainebleau Massif every weekend, and constantly come across new ones. They also make a major contribution to protecting the rock art complex, which is located in a very popular area visited each year by 10 million people, who frequently cause damage to this priceless prehistoric heritage out of sheer ignorance.” 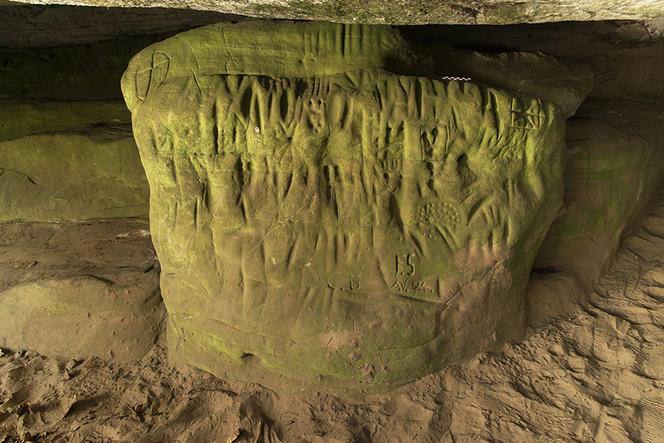 Panel in the Grotte à la Peinture. Hikers have engraved their initials “F.S.” and “C.U.” among the geometric patterns from the Mesolithic, hence the urgency to protect this heritage. 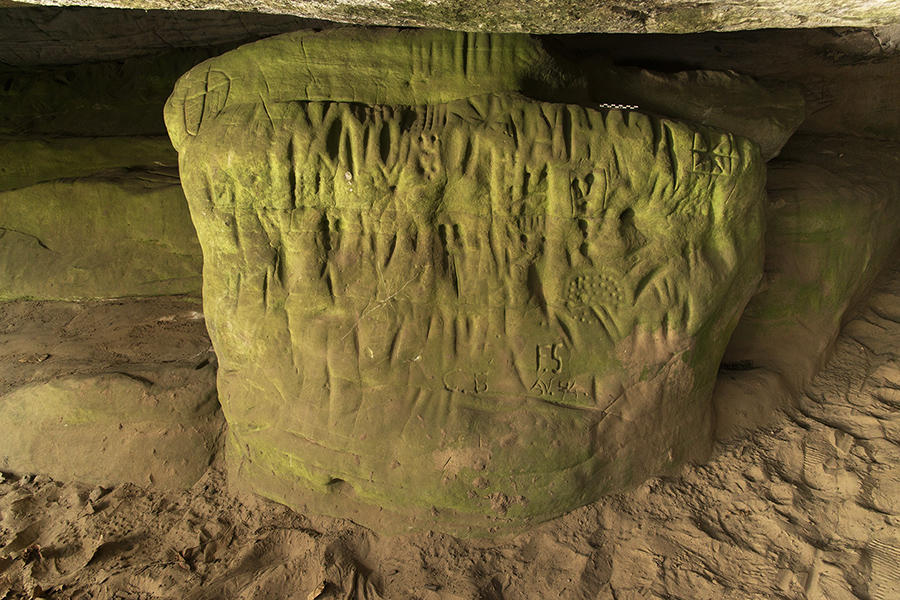 Panel in the Grotte à la Peinture. Hikers have engraved their initials “F.S.” and “C.U.” among the geometric patterns from the Mesolithic, hence the urgency to protect this heritage.
Emilie Lesvignes
Emilie Lesvignes
Share
Share

Proof of this is apparent as soon as we enter the Grotte à la Peinture, so named because its ceiling is decorated with ochre-coloured streaks. An engraved rock measuring 1 metre by 2 metres immediately catches the eye. Beneath a series of grooves and dots that have been clearly worn down by time, deeply engraved initials – “F.S.” and “C.U.”, are obviously not Mesolithic! “To a layperson, these sets of geometric patterns don't look prehistoric, and therefore don't appear to have any value,” the researcher explains. “It is up to us to raise the public’s awareness of their scientific importance, and this entails describing them very accurately.”

Two members of the team, the archaeological photographer Émilie Lesvignes, and Éric Robert, a senior lecturer at the French national museum of natural history, are doing just that. In front of an engraved rock face (a panel, in technical language), they have set up two spotlights. Kneeling in the cold sand, they have just started to record the patterns, one armed with a notebook and pencil, the other with a camera. “Our goal is to analyse the patterns in as much detail as possible – their shape, position and depth – as well as the surrounding context: the morphology of the rock, its colour, the slightest natural crack,” Robert explains. “For a long time, surveys were carried out using tracing paper on the wall, but this process tended to cause the rock to crumble,” Lesvignes adds. “Today we rely on digital methods. By taking a large number of images from different angles and processing them with dedicated software, we can obtain detailed reconstructions of the decorated walls, their dimensions and the relief of the engravings.” 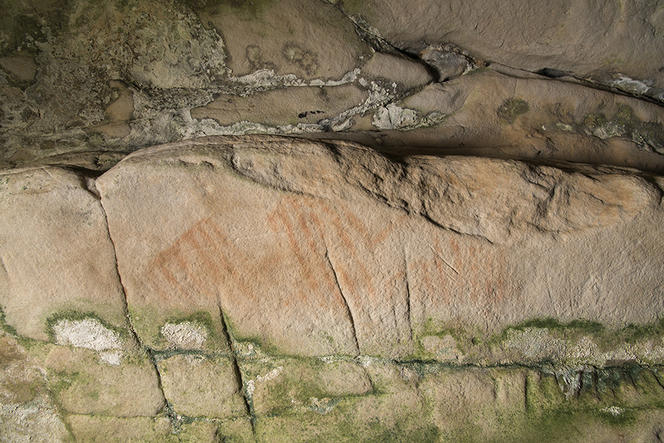 Ceiling of the cave, decorated with ochre-coloured streaks. 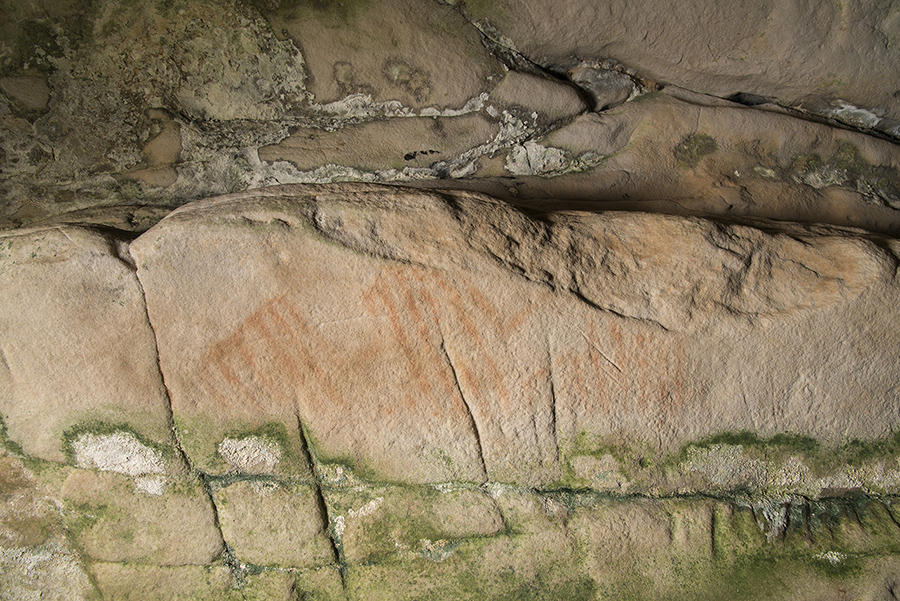 Based on this information, the researchers can then attempt to date them, for example. “The panel we are studying belongs to a larger unit, one part of which has collapsed,” Robert explains. “When we unearthed this detached piece, which can be viewed in a nearby village where it is on display, we discovered archaeological remains that are typical of the Mesolithic. A detailed analysis of the block still in place will enable us to compare it with the collapsed one, and thus confirm this dating.”

An artistic trend in the Mesolithic

However, the Mesolithic covers a long time span, from 11 500 Before Present to 7 000 BP. The question is at what point during this period, and for how long, did prehistoric artists work in the Fontainebleau Massif? It is precisely to try to answer these questions that Colas Guéret, a CNRS researcher at the ArScAn laboratory, together with PhD student Alexandre Cantin, are today hard at work at the Grotte à la Peinture.

“We found objects called armatures, which are characteristic of the early Mesolithic (between 11 500 BP and 10 000 BP) in the vicinity of several decorated caves,” explains Guéret, who is conducting his research only a stone’s throw away from Lesvignes and Robert. “These include triangular arrowheads two to three centimetres in size, and barbs –  teeth placed on the sides of the arrow – as well as waste materials called microburins. As it happens, these fragments of weapons are clearly worn, which shows that they were recycled and re-used to engrave the walls. So these are valuable clues, which have helped us to narrow down the dating of the engravings.”

A lengthy analysis of the archaeological material discovered at Fontainebleau, mainly carried out by the young researcher, has provided evidence that early Mesolithic humans were just as artistic as their Palaeolithic ancestors, something which until then had been a matter of debate. 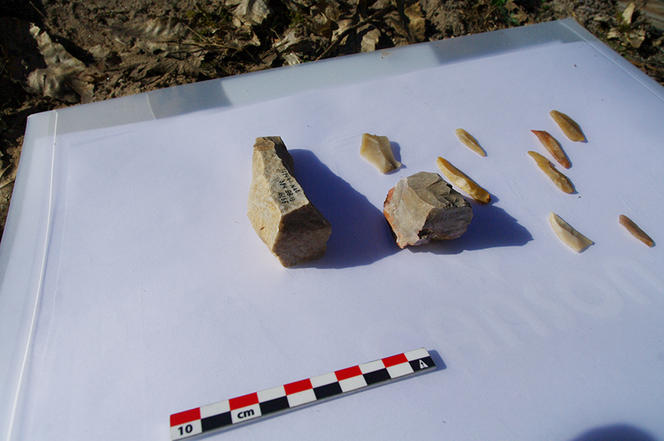 The site has revealed the presence of numerous objects, or armatures, such as arrowheads and microburins, which were used for the engravings and will need to be analysed. 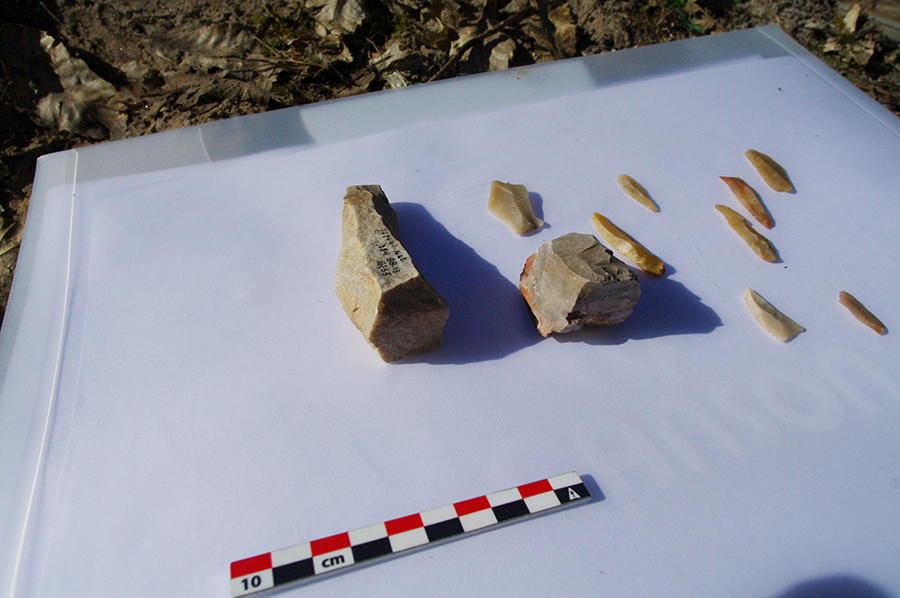 However, many questions surrounding rock art in the Paris region remain unanswered. “We have no idea how long this artistic movement lasted,” Guéret adds. “Was it 2 000 years, 500 years, or even less? Was it linked to the increasingly sedentary lifestyle at that time? We actually believe that, around the 8th millennium BC, populations moved around less and were becoming more firmly rooted in specific territories. The decorated caves of Fontainebleau may have been part of this new trend, this gradual transition. That would be consistent with the few clusters of burial sites that have been discovered elsewhere in the Paris area, and which provide evidence of relatively long-term settlement in one place. But we still have to prove it!”

At the end of the spring, a new archaeological campaign will begin in the cave, and is expected to last three years. Guéret and Cantin will carry out trial excavations, divide the zone into one-metre square plots, and then into one quarter of a metre squares, dig each sedimentary layer at a time (usually, the deeper the layer the older it is), carefully sift all the sediments and pick through them using tweezers.

“That's the most tedious and time-consuming part of the job,” Guéret explains. “Every 15 minutes of excavation means two days of sorting. But it's an essential step, because we have to collect everything: remains of microfauna, fragments of arrowheads, pieces of burnt hazelnut, and so on, in order to get a better understanding of the history of such rock art complexes.”

Grids, grooves and dots by the thousands

The other key to trying to decipher these elements is to study their location in the landscape. During these three years, Cantin will analyse the distinctive features of the decorated shelters, as compared to those which, although sometimes located right next to them, are devoid of engravings. Are they preferentially found on the Fontainebleau Massif's higher ground? Are they positioned in a particular way? Are they made of a type of sandstone that is particularly easy to cut?

Once over, will this challenging archaeological work reveal what these Mesolithic artists were trying to express when they engraved thousands of aligned grooves in the sandstone? “They are much harder to interpret than the figurative animal paintings typical of the Palaeolithic, such as those in Lascaux southwestern France,” Cantin replies. “It is currently believed that the decorated caves of Fontainebleau were not exclusively dedicated to engraving, because they were also inhabited. The material found there is characteristic of day-to-day occupancy, such as the remains of fires, animals that had been eaten, and so on. So we don't really think that they were designed as places of worship. That said, they may nonetheless have had a ritual significance.” 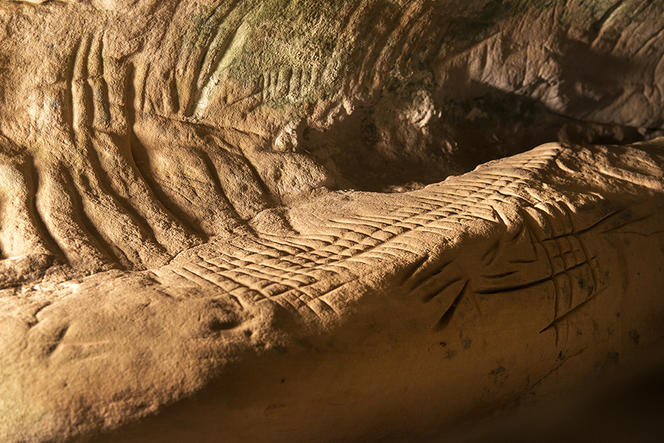 These sets of geometric patterns (grids, grooves and dots) have been dated to the 8th millenium BC. The meaning of these repetitive gestures remains mysterious. 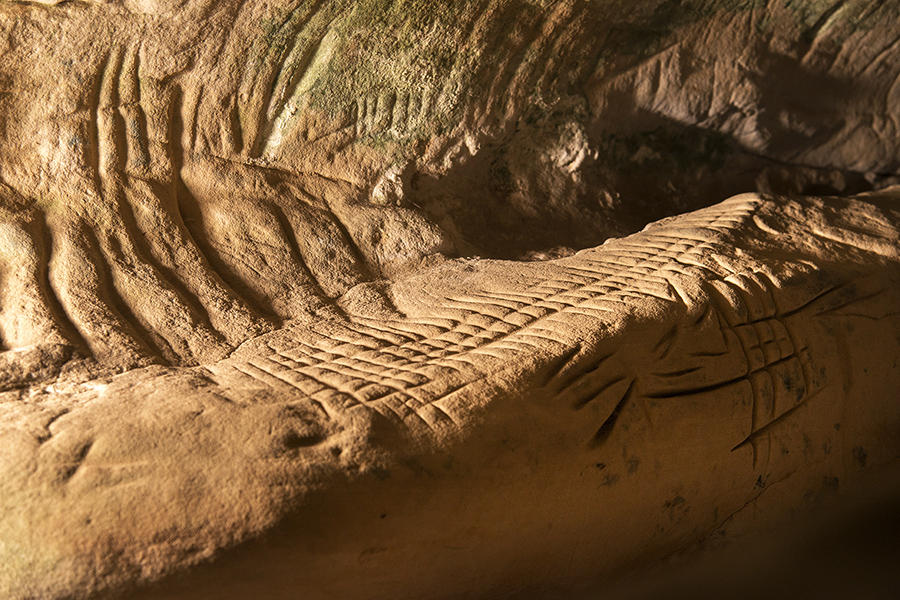 These sets of geometric patterns (grids, grooves and dots) have been dated to the 8th millenium BC. The meaning of these repetitive gestures remains mysterious.
Emilie Lesvignes
Emilie Lesvignes
Share
Share

It's early afternoon, and the sun is as hot as in May. The Camembert sandwiches have been washed down with coffee. To the right of the engraved panel where Robert and Lesvignes have resumed their observations, Valentin is exploring one of the narrow passageways in the Grotte à la Peinture. Wherever you look, to the right, to the left, upwards, almost all the walls, which are so close together he can hardly move, are covered with engravings, a succession of mysterious grids, grooves and dotted lines.

“We have worked out that it must have taken these Mesolithic people about 20 minutes to cut a single groove. And just look how many there are! Even if these shelters were not places of worship, I can't help but think of a religious act – in the sense of a repetitive gesture that has no utilitarian purpose,” Valentin says, as he examines each millennia-old groove with his spotlight. “Maybe it was a kind of exercise in prehistoric piety!” he smiles. “We'll probably never know the exact meaning of these engravings. But our work should enable us to get to know these 8th millennium Parisians a little bit better.” And remember, you can admire their work – but not touch it! – just by hopping onto an ordinary suburban train.

See author's bio
Jean Dalibard receives the CNRS 2021 Gold MedalPrevious
The story of AIDS, from fear to fight Next