Home / Articles / The Enigma of Antimatter

The Enigma of Antimatter

Home / Articles / The Enigma of Antimatter

The Enigma of Antimatter

Electron trajectories (curves turning to the right) and positrons (curves turning to the left) generated in a bubble chamber subjected to an intense magnetic field.
GORONWY TUDOR JONES, UNIVERSITY OF BIRMINGHAM / SCIENCE PHOTO LIBRARY
Share
Share
The relation between matter and antimatter has puzzled scientists and sparked experiments on a gigantic scale. The physicist Marie-Hélène Schune explains.

The first Night of Antimatter was held in fifteen cities on 1 April 2019  to celebrate the advances and mysteries in this cutting-edge field of research. What exactly is antimatter?
Marie-Hélène Schune:1 Matter and antimatter are formed by completely symmetric partners, with each elementary particle of matter having its corresponding image in antimatter. These partners share many identical properties, such as mass, lifetime, and spin, but they differ with regard to electric charge, and some of their quantum properties are inversed. The encounter of matter and antimatter prompts their annihilation and the release of energy. The positron, which was the first antimatter particle to be detected, is the antiparticle of the electron: it has the same mass, but its charge is positive. In general, subatomic antiparticles are simply referred to as "bar": the counterpart of the u quark is the ū antiquark, pronounced "u-bar." There are also antineutrons, antiprotons, and antiatoms. The heaviest antielement observed is antihelium 4, which consists of two antiprotons and antineutrons, and was obtained in 2011 at the Relativistic Heavy Ion Collider in the United States, located on Long Island. 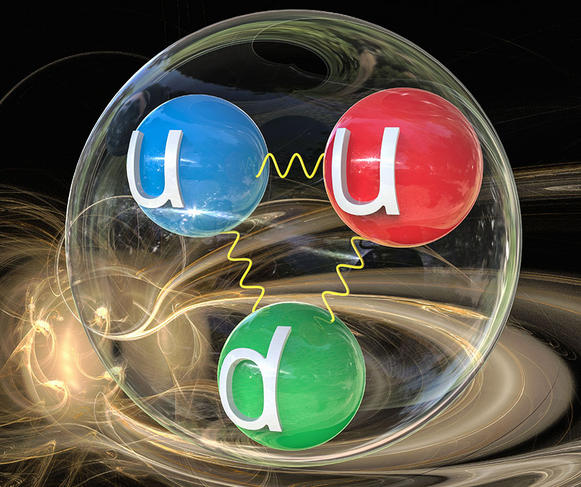 Artist's impression of a proton with two u quarks (blue and red) and a d quark (green). The forces between quarks are connected by gluons (yellow). 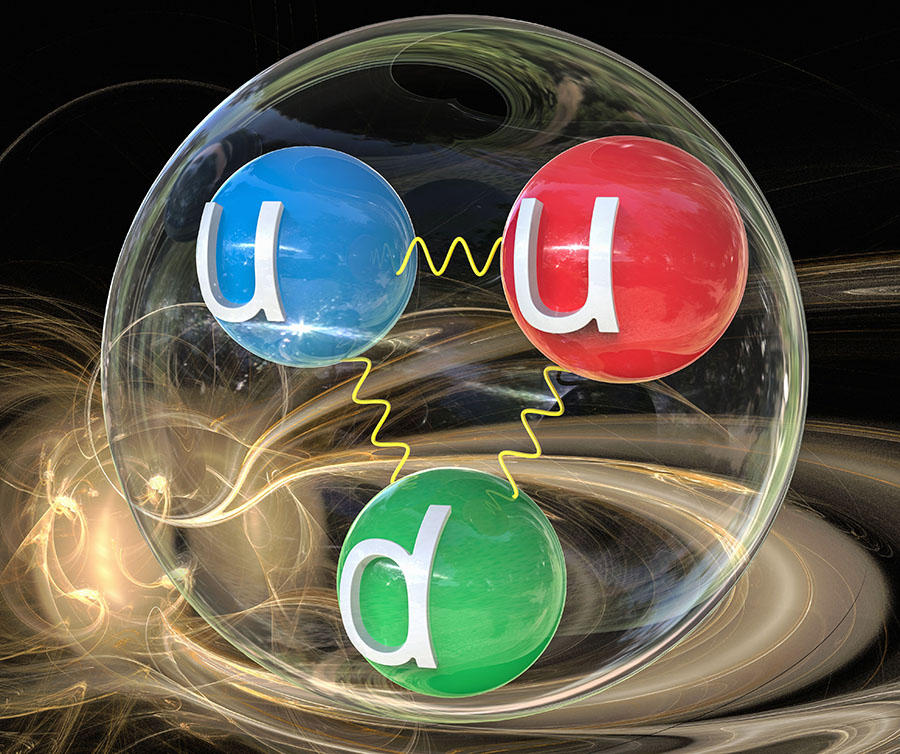 Why are researchers so interested in antimatter?
M.-H. S.: In most cases in particle physics, matter and antimatter have identical roles. Until the 1960s, it was even thought that matter and antimatter had fully symmetrical behaviors. The discovery in 1964 of a different behaviour between matter and antimatter complicated the picture, a phenomenon that is known as CP violation.2 We come across a major problem when we turn to the theory of the Big Bang, as well as observations of the evolution of the Universe. The Big Bang started out from pure energy that produced as much matter as antimatter. Both of them should have mutually annihilated one another, yet we exist today thanks to an excess of matter. Where does this difference come from, and where is the missing antimatter? Some theories suggest the presence of antigalaxies. However, we have never found the signature of the contact zones between matter and antimatter, which should release an enormous amount of energy with a very distinctive signature. The observable Universe is completely dominated by matter, and this implies the existence  of a violation of CP-symmetry. The Standard Model of Particle Physics does contain CP violation, but in too small an amount to explain the Universe as we currently observe it. In other words, something doesn't "fit." In particle physics we are therefore more interested in listing and understanding the conditions in which CP-symmetry is violated than in antimatter itself. This is the objective of the many experiments conducted in particle accelerators, such as the LHCb3 experiment at the LHC (Large Hadron Collider) at CERN.4

What are the known cases?
M.-H. S.: For now they involve s, b, and c quarks—respectively strange, bottom, and charm5—in addition to their antiquarks. The first CP violation was discovered in 19646 for strange quarks, followed by bottom quarks in 2001, while charm quarks date back only to mid-March of this year at the LHC! Neutrinos have also been studied from this perspective. Some theories imply that they can be their own antiparticle, however nobody has yet observed the signature of such a phenomenon. It's an extremely interesting field, but it's not my speciality.

How are your experiments on quarks and antiquarks at the LHC proceeding?
M.-H. S.: CP violations are phenomena that are rare and difficult to capture. Recording them amounts to finding a needle in multiple haystacks, so our procedures generate an enormous number of events. What's more, quarks and antiquarks cannot be observed individually, but only within hadrons, which is to say the subatomic particles that they make up with gluons. I work at the CERN collider as part of the LHCb experiment. In the LHC collider about  2500 bunches of one hundred billion protons are set turning in one direction, and the same amount  do the same in the other direction. This leads to forty million proton-proton collisions per second, and creates an enormous number of hadrons containing b and/or c quarks and a similar amount of antihadrons containing  b-bar or c-bar antiquarks. We use enormous sensors stretching across dozens of meters to measure the passage of particles, with a precision of the order of the micron. The quantity of data is gigantic, and must be sorted in order to retain only those events that are of potential interest. This choice must be made in just four microseconds. All of these technological challenges can be successfully met only as part of a large international experiment, bringing together nearly a thousand researchers. Finally, each team can draw from the immense pile of available data according to their area of interest. 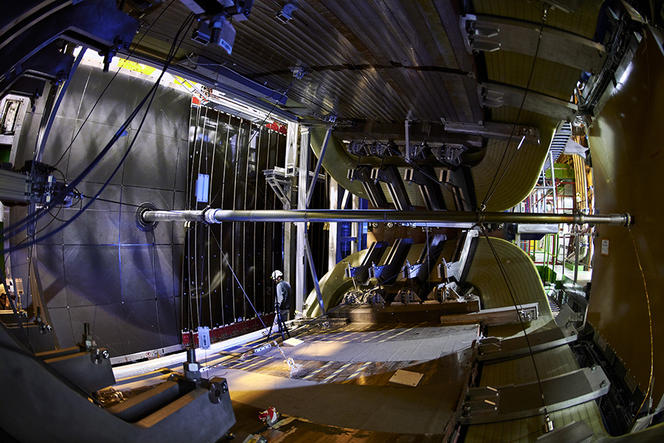 The LHCb experiment at CERN will enable the observation of quark production and disintegration. 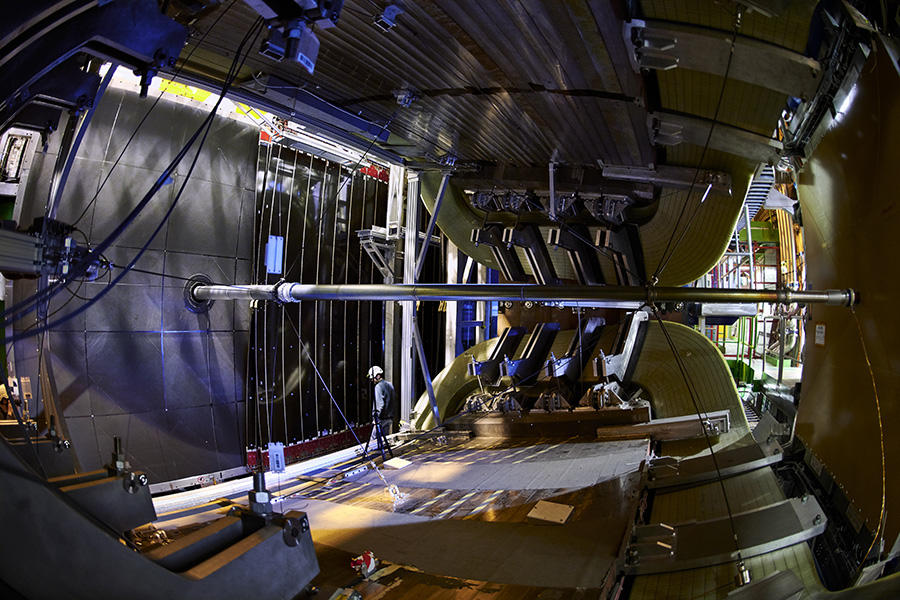 Can antimatter be observed outside of these immense accelerators?
M.-H. S.: Yes, I could cite for example the Alpha Magnetic Spectrometer (AMS) aboard the International Space Station. This detector is actually fairly similar to the sensors that we use in our experiments in particle physics: it measures the curve of charged particles that cross through it in order to determine their electric charge and impulse. It can also provide information regarding particle mass.  For example, if the mass measured is compatible with that of an electron and the charge is positive, we are in the presence of a positron, the antiparticle of the electron. We also observe antimatter using Positron Emission Tomography (PET). We inject the patient with glucose containing a small quantity of radioactive nuclei that emit positrons, which mutually annihilate with the electrons in the patient's body, thereby emitting photons with distinctive energy. Detectors can then spot them, indicating those places where the glucose attached.

Article
First-ever physical model consistent with the history of the...
Physics

Article
Is ventilation the ultimate weapon against Covid-19?
Matter