Home / Articles / Seeing in the Dark?

Seeing in the Dark?

Home / Articles / Seeing in the Dark?

Seeing in the Dark?

How has the chlorine used in phototherapy to eliminate tumour cells been found to interact with the visual system?
motortion /Stock.Adobe.com
Share
Share
The treatment of certain cancers using dynamic phototherapy has revealed an unexpected side effect: patients can see better at night. Using molecular simulation, scientists have now succeeded in clarifying the mechanisms that underlie this surprising visual acuity.

This is an unforeseen side effect of dynamic phototherapy, a technique that combines light and a photosensitive medication to treat cancers of the skin, oesophagus or bronchi, as well as certain bacterial infections. “In the early 2000s, published articles reported on patients being treated with chlorine e6, a photosensitive molecule, who were upset to start seeing silhouettes and outlines in the dark,” explains Antonio Monari, a chemist at the LPCT1 who specialises in molecular simulation.

The principle underlying phototherapy is well known: the drug is activated by a laser beam focused on the tumour – infrared radiation with shallow penetration in the tissues – and destroys cancer cells by producing singlet oxygen, a highly reactive oxygen species. But how does the chlorine e6 used to eliminate tumour cells interact with the visual system? This is what Antonio Monari and his colleagues sought to determine by applying a novel method in biology: molecular simulation that can mimic biochemical reactions entirely on a computer, without any need for a lab bench or microscope. 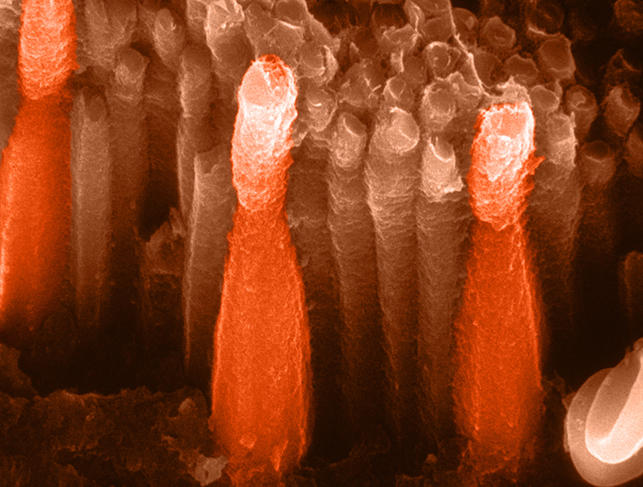 In theory, the rods (in red) in the photosensitive receptors of the eye are not sensitive to the infrared radiation that predominates at night.. 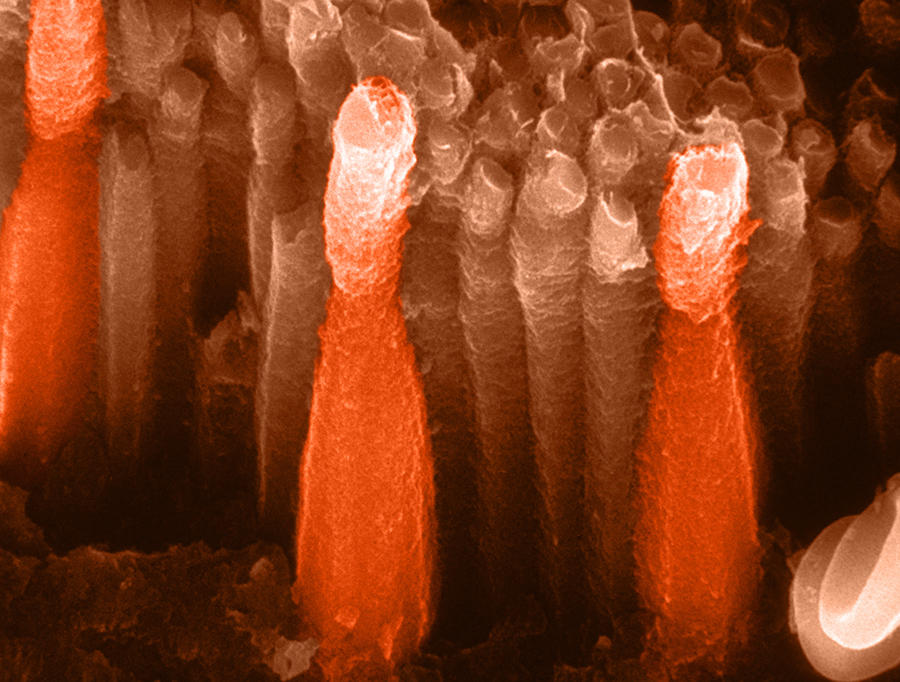 During the visual process, light is collected by a series of receptors in the retina, the cones and rods. The latter contain large quantities of rhodopsin, a photosensitive protein that can absorb visible light thanks to an active compound called retinal, which derives from vitamin A. “When it receives light, retinal changes its chemical structure and dissociates itself from the protein, allowing translation of the light signal into an electrical signal that can be interpreted by the visual cortex,” explains Antonio Monari. Under low light levels, and particularly at night, the predominant light radiation is no longer in the visible domain but at higher wavelengths (the infrared level) to which retinal is not sensitive. That is why we cannot see in the dark like many other animal species.

“Thanks to experiments carried out by biologists in recent years, we now know that under infrared light the chemical structure of retinal is modified after the injection of chlorine (isomerisation) in the same way as when it receives visible light. This explains the increase in night-time visual acuity,” the scientist explains. “However, we did not know precisely how rhodopsin and its active retinal group interacted with chlorine. It is this mechanism that we have now succeeded in elucidating via molecular simulation.”

This method has been used by biologists for around a decade, and thanks to algorithms integrating the laws of Newtonian and quantum physics, which are both active at the atomic level, it is able to mimic the functioning of a biological system over time. The movement of each atom is modelled as a function of its attraction or repulsion with respect to neighbouring atoms, as well as the breakdown or creation of chemical bonds.

“For our simulation we placed a virtual rhodopsin protein inserted in its lipid membrane in contact with several chlorine e6 molecules and water, or several tens of thousands of atoms,” the researcher adds. “Our super-calculators ran for several months and completed millions of calculations before they were able to simulate the entire biochemical reaction triggered by infrared radiation. This reflects the extreme complexity of these phenomena, which occur within a few hundreds of nanoseconds.” 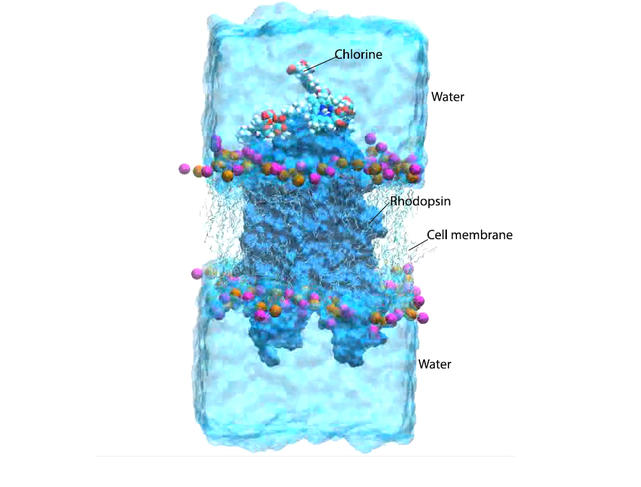 Screen capture of the digital molecular simulation performed during these experiments. It is possible to see the chemical interaction between the chlorine molecule used for phototherapy and the rhodopsin present in the receptors of the eye. 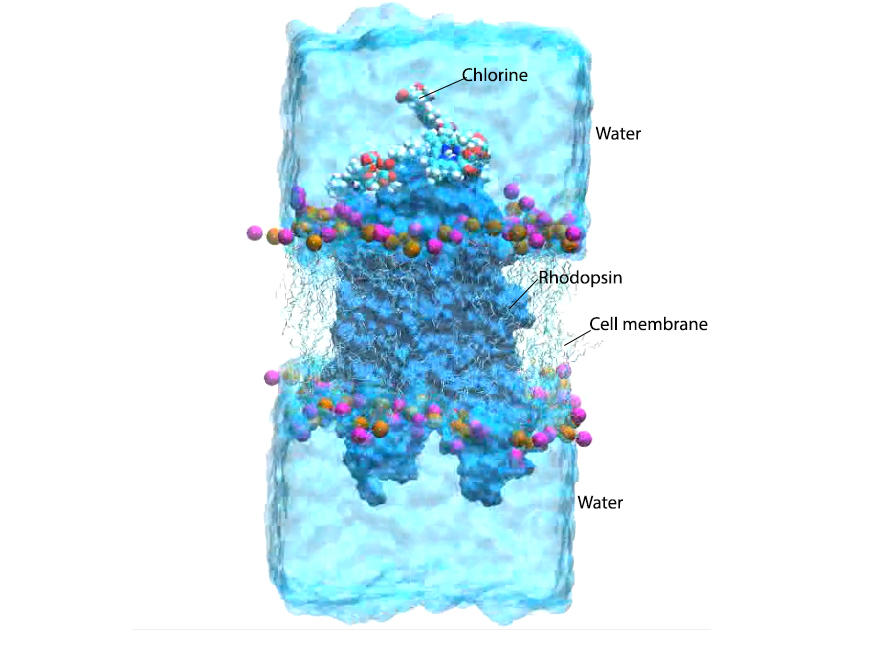 By absorbing infrared radiation, chlorine e6 interacts with the oxygen present in the eye tissues and transforms it into reactive, or singlet, oxygen, as has been observed in cancer lesions. Antonio Monari and his colleagues at the Spanish universities of Alcala de Henares and Valencia, and at Nankai University in China, have succeeded in showing that this singlet oxygen penetrates the rhodopsin molecule and accumulates alongside the retinal, causing its isomerisation. “As we are using low-level infrared radiation – quite unlike the power of the laser beam used in phototherapy –no sufficient reactive oxygen is produced to trigger the destruction of eye cells,”the researcher emphasises. “Enough though to cause a slight improvement in night-time vision.”

In the longer term, understanding this mechanism could make it possible to neutralise this side effect in patients treated with dynamic phototherapy. It also opens up interesting prospects for the development of alternative treatments for blindness or hypersensitivity to light. “One could thus imagine reproducing this mechanism and improving it to allow people to see at night, but intentionally this time,” the scientist points out.

These findings demonstrate the value of molecular simulation in understanding biological systems. “It is still early days, as it is difficult to mimic systems that involve very large molecules. Yet molecular simulation is already being used to shed light on fundamental mechanisms – for example, why certain DNA lesions are better repaired than others – and enable the selection of potential therapeutic molecules by mimicking their interaction with a chosen target,” the scientist concludes.

See author's bio
How Long Have we Been Talking?Previous
Revealing the Amazing Amazon ReefNext