Frédérique Plas/CNRS PHOTOTHEQUE
Share
Share
After having received the Gruber Prize in Cosmology last May, the astrophysicist Jean-Loup Puget, emeritus senior researcher at the CNRS, was awarded the Shaw Prize in Astronomy on September 26 in Hong Kong. These major prizes are in recognition of the scientist’s work, which in particular has furthered our knowledge of cosmology, and interstellar matter.

“What do I think of Jean-Loup Puget? That’s easy: everyone loves him!” exclaims François-Xavier Désert, a former doctoral student with the astrophysicist. “He brought together the energy of many researchers and pushed them along together on a major project: Planck.” Jean-Loup Puget, CNRS emeritus senior researcher at the Institut d’astrophysique spatiale1 and at the physics department of the École Normale Supérieure (ENS), is indeed one of the founding figures behind the renowned satellite of the European Space Agency (ESA). It is for this groundwork that this year he has been awarded the Shaw Prize,2 dubbed the Nobel Prize of the East, and which is awarded annually in September in Hong Kong. This prestigious prize is also being awarded to him in recognition of two other key contributions to astrophysics. First, his first detection  of the cosmic infrared background radiation, and second, his suggestion that big aromatic carbon molecules compounds are a major components of the interstellar medium. A member of the French Science Academy, Jean-Loup Puget was also awarded the Gruber Prize3 in May 2018 alongside Nazzareno Mandolesi and the Planck Consortium.

From Larousse to astronomy

“My father, who worked as hospital  nurse , was the son of domestic attendants. As a child, he received only elementary school education and he was self-taught and passionately interested in everything, and bought tons of various books. It was in fact through reading the Larousse Encyclopedia that I became interested in astronomy!” At the technical secondary school in Chalon-sur-Saône, he was very quickly noticed and sent to a scientific preparatory school in Lyon, before rapidly entering the Ecole Normale Supérieure in Cachan .  Giving up the plan of a golden career in engineering, he leaned towards the more precarious but far more stimulating option of research.

On beginning his first years at the ENS in Cachan, in 1966, he was passionately interested in particle physics. “I loved theoretical physics, but I wasn’t good enough at mathematics to continue research in this discipline.” After obtaining  a prestigious  master diploma in theoretical physics at the University of Orsay. “During an intership for my postgraduate diploma, I worked on a model of the universe that  would contain as much matter and antimatter. In short, at the ripe old age of 23, I was already active in cosmology…”

And he was not his family’s sole standard-bearer. His younger brother, Pascal, completed a doctorate in chemistry, which led him among other things to become a project manager  on various astronomyinstruents on the ground and in space . “Our parents were delighted: we did the studies which they had never had access. Unconsciously, we must have seen that accomplishment as a way to get even with life.”

After obtaining his postgraduate diploma, Puget began his first level of doctoral thesis, which he completed in a single year.  During a year at CERN, he worked to characterize the annihilation process for matter and antimatter at energies much lower that what had been measured in the acclerators.4 On completing these studies, he left in 1970 to join NASA’s Goddard Space Center to analyze data from the SAS-2 satellite for searching evidence of such large scale annihilation in the universe. It was there that he discovered his current subject of predilection: radiation remnants left in the cosmos from earlier stages of the universe… something called “cosmic background radiation.” The most well known of all, the cosmic microwave background, a sort of echo of the Big Bang in the form of radio waves, was discovered in 1965 by Arno Penzias and Robert Wilson. 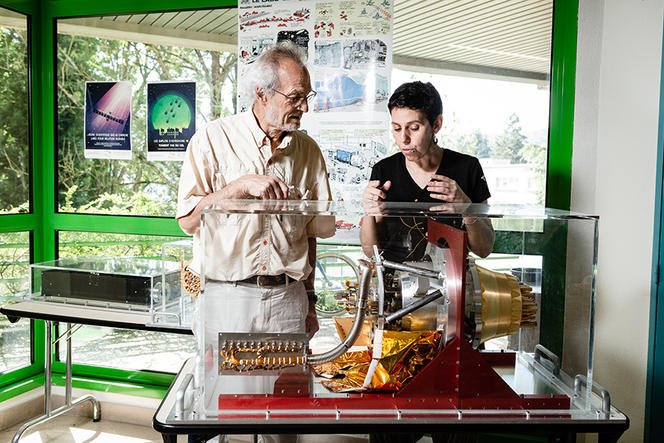 Jean-Loup Puget with Nabila Aghanim, fellow researcher in cosmology and key to the Planck mission which he helped create. 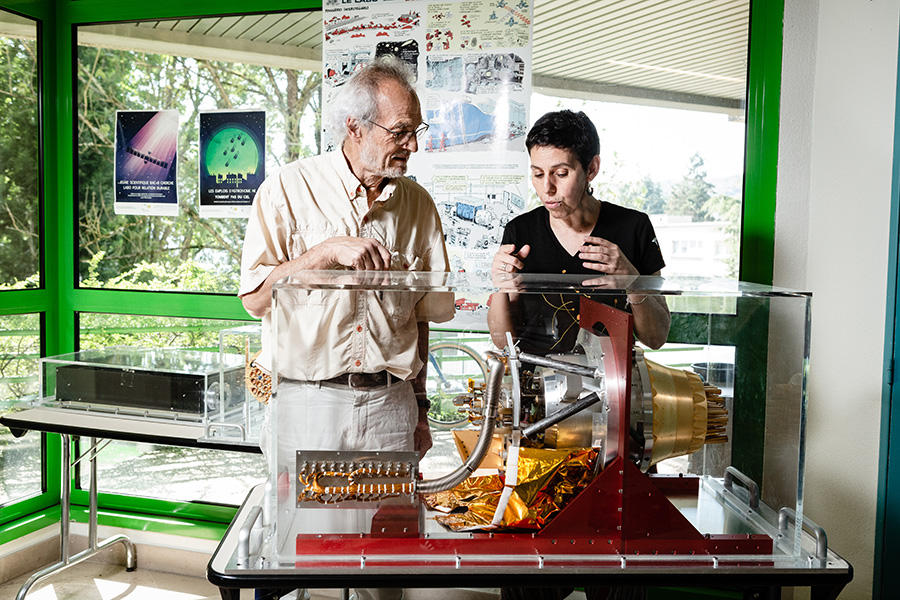 Towards the far infrared

However, during his time at Goddard Space Center, Jean-Loup Puget became interested in other luminous fossils  that had kept the information of the history of star formation for cosmic archaeologists, and in particular, the diffuse infrared background produced by part of the star light that had been absorbed by dust from the time of the formation of all galaxies .  The existence of this background noise for the moment was predicted to exist but its intensity was very uncertain. The researcher and his team, which includes François-Xavier Désert and François Boulanger, detected it in data from the Cosmic Background Explorer (COBE) satellite. “Here we had in our hands a precious tool for charting the history of the stars and galaxies via the emission of the dust contained in the universe.”
In 1996, Puget’s career took off. Amongst his other achievements, he created the Institut d’astrophysique spatiale (1998-2006) in Orsay and became a mission scientist with the ESA’s Infrared Space Observatory (ISO). Some years earlier, IRAS  had detected a in our laxy and other galaxies  an emission of mid infrared radiation from the interstellar medium not predicted by the the dust model  that the interstellar medium was supposed to contain . Jean-Loup Puget and his colleague, Alain Léger, understood that this strange signature was that of polycyclic aromatic hydrocarbon (PAH) molecules, and that these large molecules in fact formed one of the main components of the interstellar medium.

When his head is not in the stars, Jean-Loup Puget is often to be found at sea. “I am very keen of sailing, and I’ve done a lot of sailing in the Far North, around the Faroe Islands, Iceland and so on.” This accounts for his athletic demeanor, and his weather-beaten complexion that contrast with his silvery beard and hair. “In fact, I met my wife  on a  Les Glenans  sailing shool cruise boat . We did a lot of sailing with our children, even when they were still very young .” The young Sea Cadets grew up to take up the scientific mantle of the Puget family and both work for the time being in the automobile industry engineers .

Father of the Planck satellite

Whether at sea or gazing at the stars, the details of the Planck satellite were working themselves out in his mind. “In 1993, my team and I proposed to design a small satellite for the Cnes, Samba, devoted entirely to analyzing the diffuse cosmological background. At the same time, Nazzareno Mandolesi was working at the University of Bologna on a similar project, though sensitive to the lowest frequencies: Cobras. When the ESA issued a call for tenders for its third medium-sized mission (M3) for 2000, the two proposals were combined.” Cobras-Samba was selected in 1996 and was ultimately renamed the Planck satellite. Since 1995, Jean-Loup Puget has been the scientific manager of HFI, the high-frequency instrument aboard the satellite.

Has he already got a plan of Planck 2.0? “I’m leaving that to the younger generation! Nevertheless, I’m trying to make my experience available for potential post-Planck projects such as Pristine. And anyway, I’m officially retired now.”

1973 Enters the CNRS
1988 Awarded the CNRS silver medal
1995 Becomes manager of the high-frequency instrument aboard the Planck satellite
1998-2005 Director of the Institut d’astrophysique spatiale
2002 Enters the Science Academy
2018 Receives the Gruber Cosmology prize and the Shaw Astronomy prize.

Slideshow
Ten samples that have marked the history of chemistry
astrophysics