The Rinecker Proton Therapy Center in Munich, Germany. This center uses some of the most advanced proton therapy technologies.
AMELIE-BENOIST / BSIP
Share
Share
Hadron therapy is especially indicated for tumors resistant to chemotherapy and radiotherapy, or inoperable due to their localization in vital organs. A new research center and treatment facility, CYCLHAD, was just unveiled. It promises to make this cutting-edge technology more accessible.

Each year, cancer affects 384,000 new patients in France. Of these, 150,000 undergo radiotherapy, either alone or combined with chemotherapy or surgery. In most cases, this treatment results in complete remission, but it is unfortunately not always successful. This is where hadron therapy can make the difference.

“Hadron therapy is indicated especially for tumors resistant to chemotherapy and radiotherapy, or inoperable due to their localization in vital organs: e.g., brain tumors, skull base, face or neck tumors, tumors close to the heart or the eye, and so on,” explains Jacques Balosso, professor of radiation oncology and radiotherapist at the University Hospital of Grenoble.1 This treatment could concern 15,000 patients each year.

Made up of protons and neutrons, elementary particles that belong to the hadron family (from which the technique derives its name), these ions are accelerated in enormous devices which diameters range from a few meters up to 20 meters known as synchrotrons or cyclotrons. The speeds are prodigious and may be as high as 73% of the speed of light, i.e., some 219 000 km/s. They are focused in a beam measuring less than 1 mm in diameter. 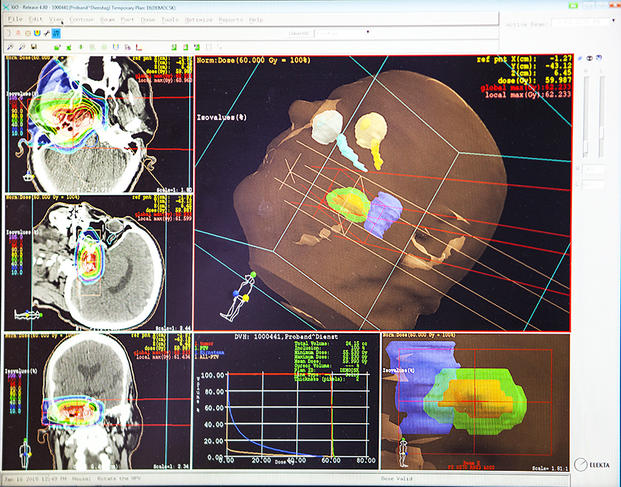 Proton therapy involves irradiating cancer cells by focusing a proton beam into the heart of the tumor, while preserving the surrounding healthy tissue. 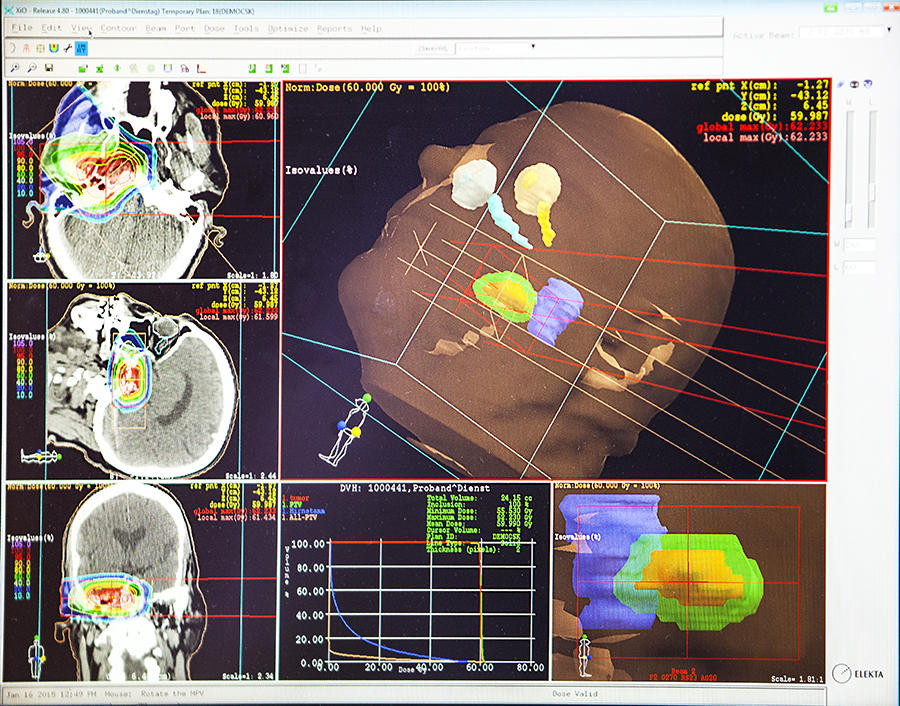 In theory, hadron therapy beams are more accurate than X-rays. When using carbon ions, they also appear more effective. But most importantly, “charged ions deliver most of their energy to the targeted tumor (Bragg peak), ensuring that maximum damages can be inflicted on tumor tissue while sparing adjacent healthy cells,” explains Cussol. Initially proposed in 1946 by the American physicist Robert Wilson, proton therapy was first used in patients in 1954 in the United States; the use of carbon therapy began in 1975, also in the United States. Since then, “some 150,000 patients worldwide have been treated using proton therapy, with almost 14,000 treated in France; 23,000 have received treatment with carbon ions, of whom 20,000 were treated in Japan, the leader in this field,” explains Balosso.

… But further research is needed

Nevertheless, many questions still remain unanswered: what are the exact physical and biological effects of hadron therapy on tissues? What is the real efficacy of this treatment? What is its potential toxicity? How can its anti-tumor potency best be developed and applied? These crucial questions constitute an important challenge for researchers. Hadron therapy research, currently being conducted by a dozen laboratories within the CNRS alone is “highly interdisciplinary and involves the fields of radiobiology, nuclear physics, chemistry, cell biology and molecular biology, and of course medicine,” stresses Sylvain David, deleguate scientific director in charge of interdisciplinarity at CNRS’s Institut National de Physique Nucléaire et de Physique des Particules (IN2P3).3

A major challenge in physics consists in better assessing a phenomenon that could profoundly alter the effects of carbon therapy, namely the fragmentation of carbon ions. “In contrast with X-rays and protons, these ions may break down into smaller particles when colliding with atoms inside the human body. Since they are lighter, these secondary particles can travel far beyond the initial target, potentially damaging healthy tissue,” explains Daniel Cussol. To learn more about this phenomenon, the researcher and his group are currently attempting to “determine the nature of the fragments thus produced, their direction of emission, their energy, and so on, for each type of atomic nucleus present in human tissue that may be hit by carbon ions. Tissues are made at more than 95% of atoms of hydrogen (H), carbon (C), nitrogen (N), oxygen (O) and calcium (Ca) in proportions dependent on the individual tissue type.” This is a tedious but  essential task. In a recent study,4 researchers fired carbon ions at 4 targets consisting respectively of C, H, O and Ti (used to mimic Ca). “Our results, in the form of tables and graphs, are posted on a dedicated website for the scientific community,5” the physicist points out.

Turning a drawback into a benefit

These data should give doctors and biologists greater control over the efficacy of carbon therapy. They should also lead to the development of new control and imaging equipments. “These secondary fragments created by collisions between atomic nuclei generate radiation that may exit the human body. They may thus be detected using imaging techniques such as positron emission tomography (PET), enabling the dose deposited by the ion beam to be monitored in real time during the treatment adds Cussol. This means a drawback can actually become a benefit. 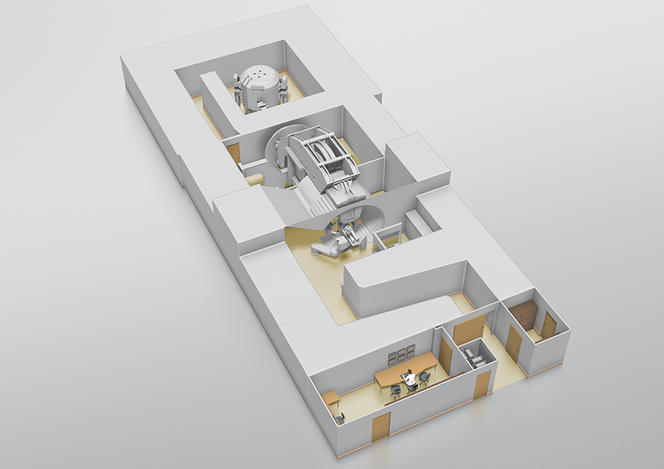 3D model of the ProteusOne® accelerator built in Caen. 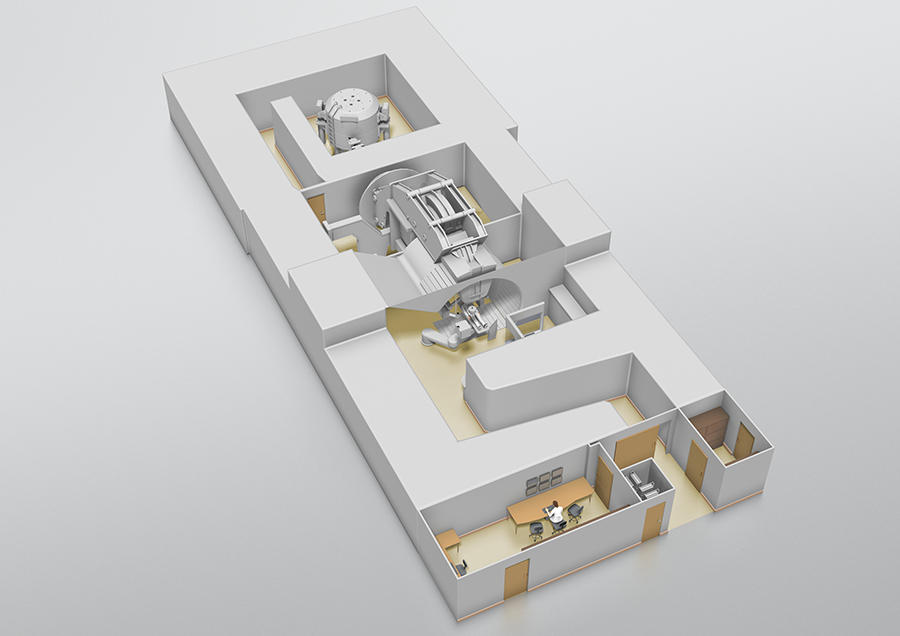 A dozen trials to evaluate the superiority of hadron therapy

A key challenge facing doctors is to accurately verify the superiority of hadron therapy—and of carbon therapy in particular—over competing treatments. To this end, a dozen phase 3 clinical trials are currently underway. “In December 2017, we launched a study for 250 patients recruited at some 20 centers across France. Half of them will undergo treatment at the carbon therapy center in Italy CNAO, while the other half will receive conventional radiotherapy or possibly proton therapy in France. The aim of this study, funded by the French social security and conducted under the legal responsibility of the Hospices Civils de Lyon, is to assess and compare relapse-free survival, overall survival, toxicity and full costs for these different treatments,” explains Jacques Balosso. The preliminary results will be available in 5 to 7 years. To accurately determine the benefit/risk ratio of hadron therapy, detailed studies are needed of its effects on both tumors, particularly those involving tumor hypoxia (areas of tissue deprived of oxygen) and refractory to conventional radiotherapy, and healthy tissue, especially in the brain. This is a specialized area for biologists.

The benefits will be scrutinized down to the molecular level

At the Cyceron platform in Caen, the team led by the biologist Myriam Bernaudin6 is carrying out a number of experiments on cells, tissues and animals using biomedical imaging (MRI or PET) to study the effects of hadron therapy on the brain. According to Bernaudin, “we are trying to determine whether, in contrast to conventional radiotherapy,7 hadron therapy exerts a beneficial effect on macrophage populations (immune cells) by reducing levels of M2 macrophages, which enhance tumor development.”
Also in Caen, but at the CIMAP,8 teams of physicists, chemists and biologists are conducting an interdisciplinary investigation of the effects of hadron therapy on both cells (particularly in 3-D bio-printed tissue) and molecules. “We irradiate biological molecules (e.g., DNA, amino acids) with carbon ions and then attempt to determine whether any compounds are created that are potentially toxic for healthy cells and tumor cells,” explains Amine Cassimi, director of CIMAP. Clearly, there is still much to be done in hadron therapy research. 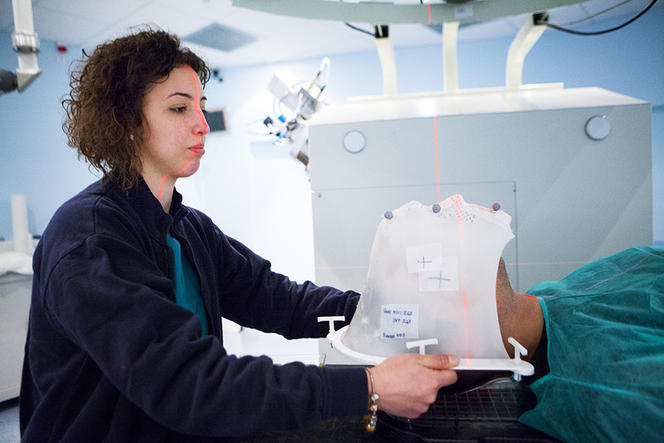 The National Center for Oncological Hadrontherapy in Milan, CNAO (Centro Nazionale di Adroterapia Oncologica) is one of the only centers in Europe with carbon therapy technology. 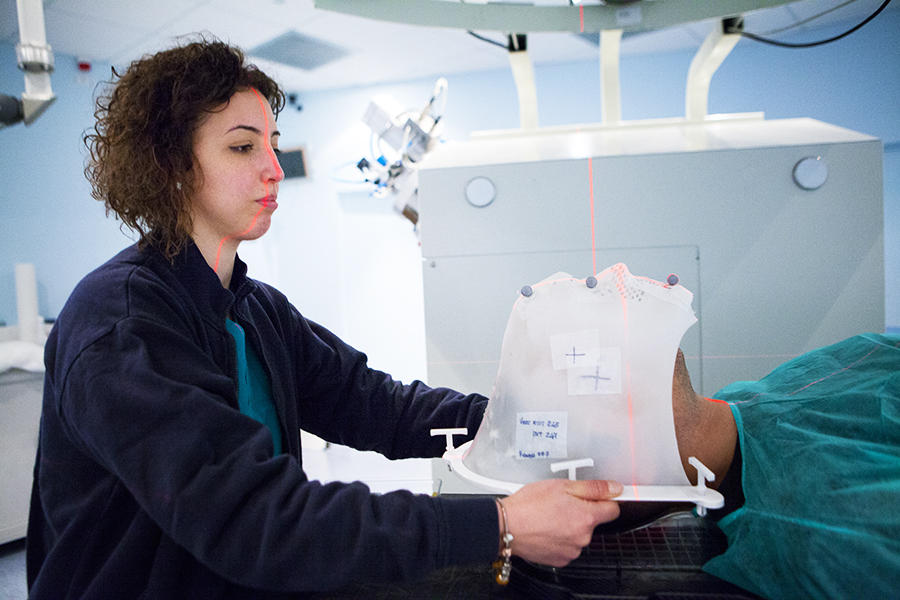 Sylvain David regrets the fact that “access to proton and carbon ion beams is still too restricted.” This is hardly surprising since at present, France operates only two centers dedicated to proton treatment, with the priority given to therapy rather than to research: the Proton Therapy Centre at the Institut Curie in Orsay and the Centre Antoine Lacassagne in Nice. The new center to be inaugurated in Caen in July will be the third. The field of carbon therapy is even more restricted: while Japan has 7 facilities devoted to this technique, with Germany having two, and Italy and Austria one each, so far there are none in France. “French researchers must turn to accelerators at research centers such as the Large National Heavy Ion Accelerator (Grand Accélérateur National d'Ions Lourds, GANIL) in Caen, where the beams generated do not have the same characteristics as medical beams. Otherwise they must rely on carbon ion accelerators situated elsewhere in Europe or in Japan,” laments Sylvain David.

“This greatly hinders our research,” observes Bernaudin. “Since we have access to the GANIL beam only once or twice a year, our last study took a entire 4 years to be completed, whereas with weekly access one year would be enough. At the moment, carbon therapy centers around in the world provide easy access for animal studies. Nevertheless, such studies are crucial to investigate such phenomena as the potential effects of therapy on cognition (memory, etc.).”

Happily, things are moving forward thanks to the Archade program.9 Following its launch in 2007,10 this large-scale project comprises three phases: construction of the CYCLHAD center11 between 2015 and 2018 and the acquisition of a first proton therapy machine, ProteusOne®, at a total cost of €76.5 million; development from late 2018 onwards of a second accelerator, the cyclotron C400, devoted to carbon therapy, at a total cost of €55 million; and acquisition of this second device in 2023. The inauguration on July 5 of the CYCLHAD center and of ProteusOne® marks the official completion of the first phase. “This device will extend access to proton therapy in France,” enthusiastically announces oncologist Jacques Balosso.  “It will enable patients to be treated starting mid-July, eventually providing therapy for up to 345 subjects each year, a third of whom will be children,” proclaims Philippe Lagalle, CEO  of the CYCLHAD company. 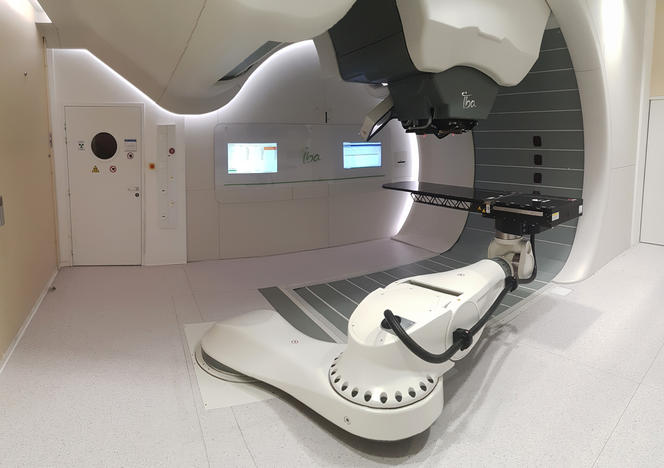 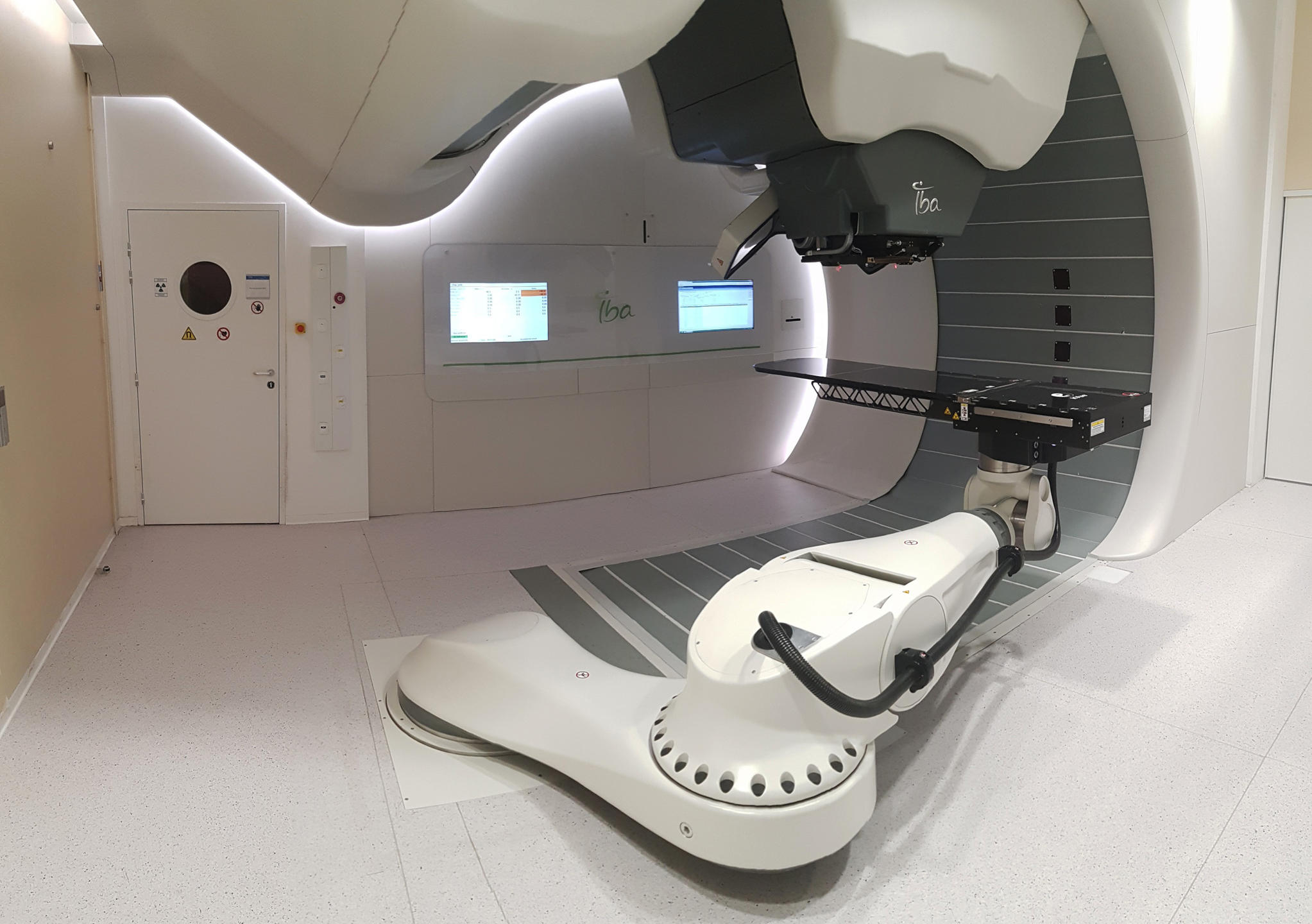 The researchers are looking forward above all to the second accelerator due in 2023. “This ion accelerator will be used for treatment and research in equal proportions,” promises Philippe Lagalle. “Most likely, it will also be the first in the world to strongly facilitate testing of carbon therapy on animal models.” French research on hadron therapy thus seems set for a bright future.