Gender power relations in mammals are less rigid than thought

Gender power relations in mammals are less rigid than thought

Female ring-tailed lemurs with their young sitting on a tree trunk in the Berenty Reserve, Madagascar.
Cyril Ruoso / Biosphoto
Share
Share
Among mammals, what are the mechanisms that govern the relations of power between males and females? A review paper by an international scientific consortium challenges a number of preconceived notions: in many mammal societies there is an alternation of dominance, or even a balance of power between the sexes. Two of the co-authors, Eve Davidian and Élise Huchard, provide their insight.

Identifying the bases of the asymmetries of power between the sexes is one of the oldest questions in evolutionary biology. Nearly 50 years ago, the discovery of the first female-dominated mammal societies heightened interest in the matter. How did this come about?
Eve Davidian:1 Historically, issues of dominance between the sexes have not attracted much consideration because power was presumed to be a male prerogative. The discovery of species like lemurs and spotted hyenas, whose females dominate access to resources, has shown that male supremacy was in fact not a given for mammals.
Élise Huchard:2 In another major finding at the time, it was observed that, although males rule in chimpanzees, among the bonobos, one of the most closely related species, females are the dominant sex. This naturally changed our point of view on the common ancestors of apes and humans.

How did you produce this review?
E. H.: The first step was to take stock of the existing knowledge and subject it to a critical analysis, pinpointing the possible obstacles to our understanding of power variations between males and females in mammal societies. We then drafted a theoretical framework, proposing hypotheses based on established data and new breakthroughs. 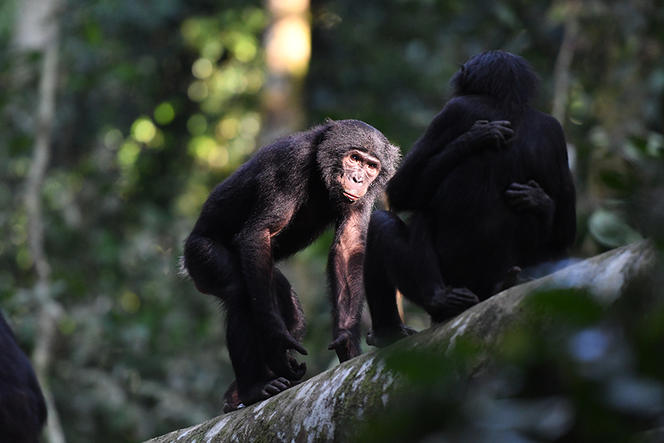 Bonobos are known for their gender-egalitarian dominance structure. In this photo, taken at the Kokolopori Bonobo Reserve in the Democratic Republic of the Congo, an adolescent male approaches a female to initiate a grooming session. 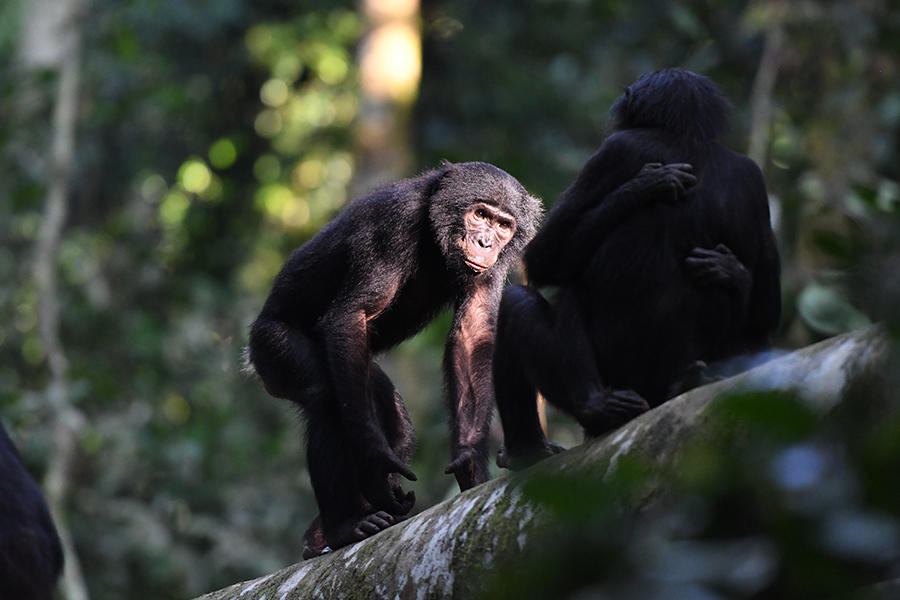 E. D.: Each of the authors has a specific expertise based on the empirical study of different species. Élise has worked with baboons and meerkats, and I specialise in spotted hyenas. Another colleague has investigated lemurs, another bonobos, etc. Together we tried to identify the characteristics of each species while maintaining an overall vision.

The historical hypotheses for explaining intersexual power asymmetries were incomplete. Why is this?
E. H.: Some of the theories focused on physical attributes that facilitate the assertion of power over other individuals – the dominant males are usually larger and more aggressive. This is especially true in the case of my own preferred species, chacma baboons. Other postulates mentioned asymmetries of motivation: the societies dominated by females are those in which the latter show greater motivation than the males in conflicts, for example to access food. The third type of conjecture concerns sexual selection. Evolutionary biology often states that fertile females have greater freedom in choosing their partners than males, since these are often more numerous in a given adult population. If, in certain species, the females prefer smaller or more deferential partners, the males will eventually evolve to become smaller or more deferential than the females, making it easier for the latter to dominate. However, this scenario has hardly ever been observed in practice.

Also, because they are based on a binary vision that tends to oppose male- and female-dominated species, the main shortcoming of the historic hypotheses is that they cannot be verified since there are not enough female-dominatant species to compile meaningful statistics.

Indeed, there are species in which the relations between the sexes are quite balanced, like the grey wolf, and others that show more flexibility…
E. H.: Wolves are a perfect example of a good balance of power, with durable monogamous couples. Their societies are so egalitarian that it’s quite often impossible to tell whether one gender dominates the other. This is a common characteristic of monogamous species, a group that also includes meerkats. Like wolves, they form a cooperative society, with a couple that reproduces and members of their family, often their adult offspring, helping raise the latest litter. Regarding flexibility, there are species – like the spotted hyenas, capuchin monkeys and bonobos – in which the alpha individual is male in certain groups and female in others. 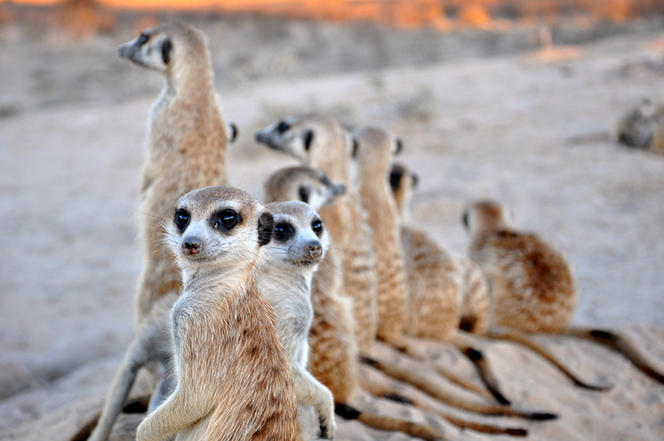 A small group of meerkats resting near a burrow in the Kalahari Desert in South Africa. Among meerkats, only the group’s alpha couple mates and there is no clear relation of dominance between the male and female of the couple. 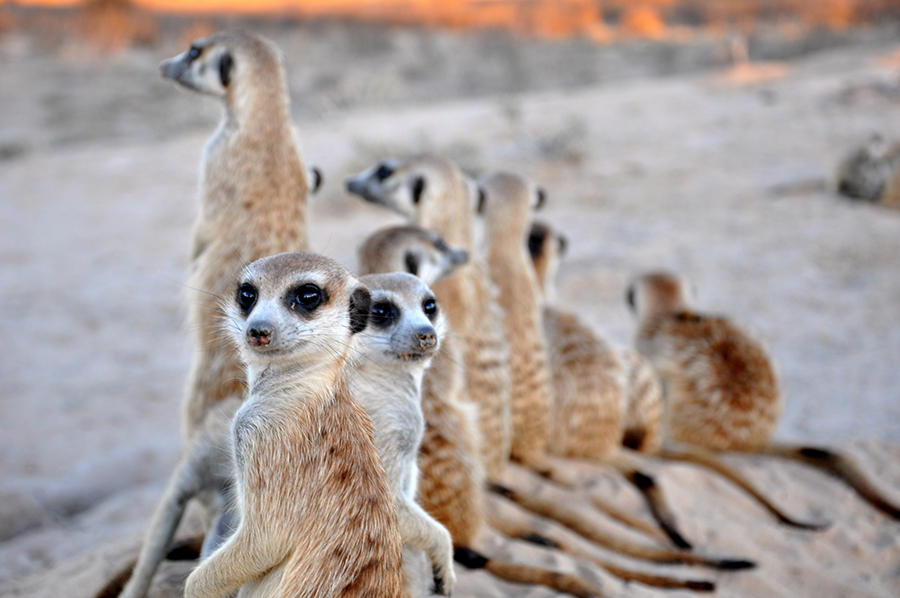 A small group of meerkats resting near a burrow in the Kalahari Desert in South Africa. Among meerkats, only the group’s alpha couple mates and there is no clear relation of dominance between the male and female of the couple.
Élise Huchard
Élise Huchard
Share
Share

What criteria did you use to define the concept of power?
E. D.: We focused on two main types of power: over access to physical resources, like food and shelter, and to reproduction. In animal societies, these are the situations that generate conflict, more so than leadership, a third type of power reflecting the role of each individual in the group’s collective decision-making.
E. H.: We looked at how individuals take responsibility for resources: if there is only one fruit tree, who controls access to it? And we posited as a central hypothesis that reproductive power – which sex decides when and with whom coupling can take place – ultimately results in social power and supremacy over resources.

While coercion and sexual dimorphism constitute an evolutionary vector favouring male dominance, female power emerges through multiple channels. Could you describe them?
E. H.: In order to maintain or bolster their reproductive control, females adopt strategies to counter sexual monopolisation by males, which is quite strong among chacma baboons: the alpha male can follow a female for several consecutive days, throughout her entire fertility period, preventing any other males from coming near her so that she cannot mate with anyone else. To avoid this, the females can go into hiding in order to mate with the partner of their choice. The case of the fossa, a terrestrial carnivore native to Madagascar, also provides an amusing example. The females are sexually receptive once a year for a period of a few days, during which they climb trees. All of the males in the forest line up at the foot of the trees and try to join them. The females, from their superior position, are more easily able to decide which males are allowed to come up and which are not. Another illustration is the banded mongoose: the females sometimes sexually solicit the males of another group, which can result in a territorial battle between bands of males. The females then take advantage of the chaos to mate with the male of their choice.
E. D.: For some species, the strategies are morphological rather than behavioural. Female spotted hyenas, for example, have an elongated clitoris that prevents the males from engaging in any forced coupling. The females can thus use reproductive power to gain social ascendancy, making male cooperation or even deference a condition for access to reproduction. It’s important to understand that, in most species, males can either force or negotiate reproductive access. Yet when the female controls it, the males are obliged to negotiate, while being at a disadvantage. Over the long term, this leverage point allows the females to assert social dominance. 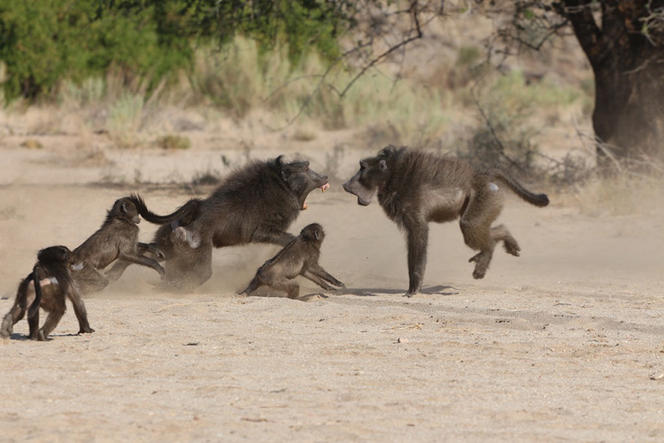 Two male chacma baboons in Tsaobis, Namibia, competing for access to a higher social rank or to an ovulating female. The power relations between the sexes are highly imbalanced among this species, with males wielding strict social dominance over females. 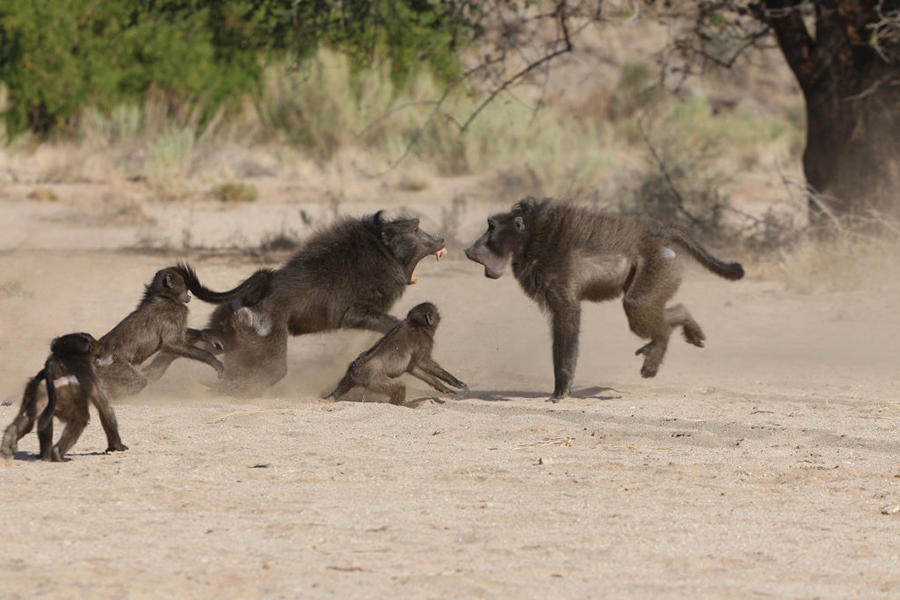 Two male chacma baboons in Tsaobis, Namibia, competing for access to a higher social rank or to an ovulating female. The power relations between the sexes are highly imbalanced among this species, with males wielding strict social dominance over females.
Élise Huchard
Élise Huchard
Share
Share

Can the ecological and social environment give rise to watersheds, either temporary or evolving, in these relations of dominance?
E. D.: The case of the red fox illustrates the flexibility of the social and reproduction system on an ecological scale. Members of the species are usually polygynous, but those in Alaska are a particular case. When an El Niño weather phenomenon considerably reduced the abundance of black-legged kittiwakes, one of their favourite prey birds, the foxes adapted by forming smaller groups, temporarily adopting monogamy, which fosters more egalitarian relations between the sexes than polygynous systems.
E. H.: On the other hand, the tipping point that characterises the differences between chimpanzees and bonobos evolves over time. Our paper focuses on reproductive control. Female chimpanzees develop a sexual tumescence that indicates ovulation. The males can thus monopolise the females during these periods, with the alpha males fathering most of the group’s offspring. But among bonobos, the females’ sexual tumescence is quasi-permanent, and therefore not a reliable indicator. The males thus have two choices: to keep concentrating on one female (monogamy) or to mate randomly with as many partners as possible, which seems to be their preferred option. This key aspect may have allowed the females to retain reproductive control. We know that female bonobos develop very strong friendships among themselves, which could also explain their dominance, but we believe that these bonds are the result rather than the cause of this dominance. 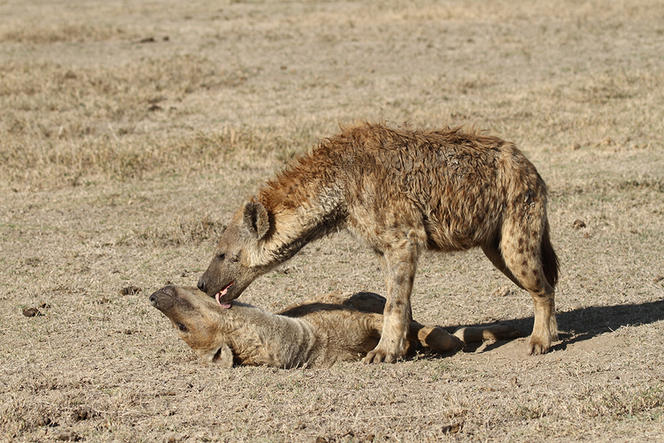 Among spotted hyenas, the structure of the female’s genitals (they have no vaginal opening and copulation takes place through their elongated clitoris) prevents the males from mating with them by force. 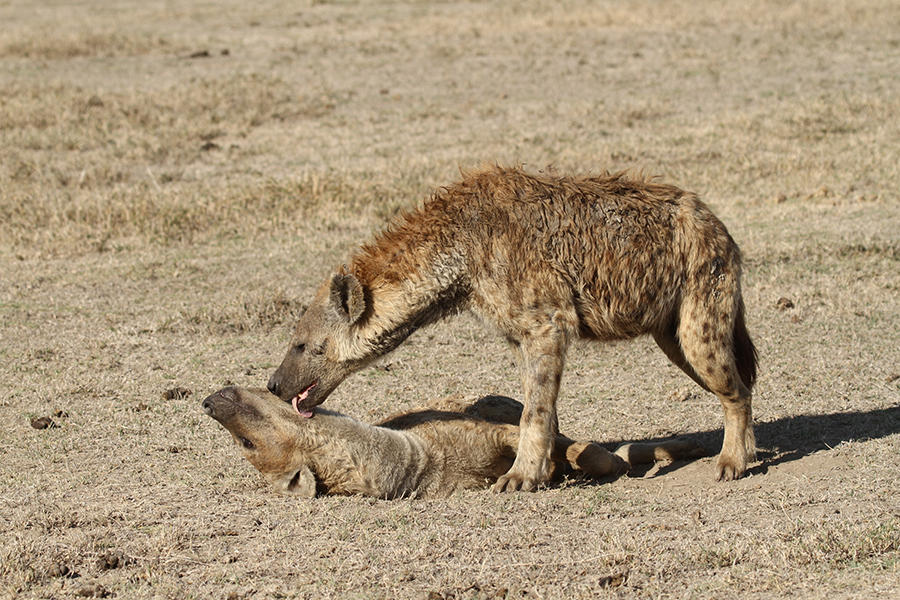 Among spotted hyenas, the structure of the female’s genitals (they have no vaginal opening and copulation takes place through their elongated clitoris) prevents the males from mating with them by force.
Oliver Höner
Oliver Höner
Share
Share

How can your review encourage further research on power inequalities between genders in animals but also in humans?
E. D.: The tools that we propose make it possible to quantify the sexual and social power relations between males and females in various animal societies. These resources should be especially useful for testing the ideas that we put forward, in particular for animals whose intersexual dominance relations have not been extensively studied. This is the case of monogamous species, as well as those whose males and females live separately and only gather together during the mating season, like African elephants and some dolphins, including the Indo-Pacific bottlenose dolphin. 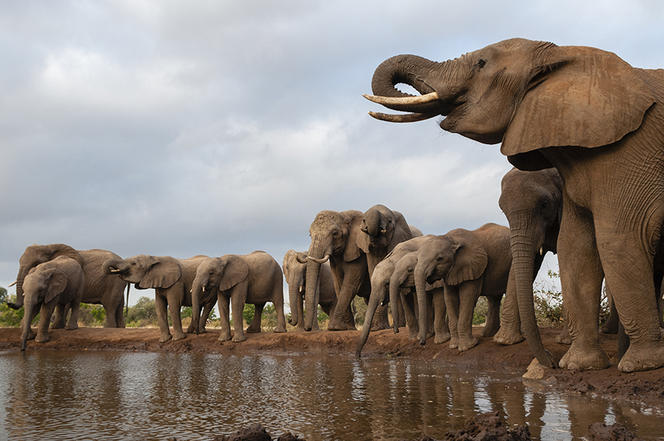 A troop of African bush elephants (Loxodonta africana) drinking at the Mashatu Game Reserve in Botswana. 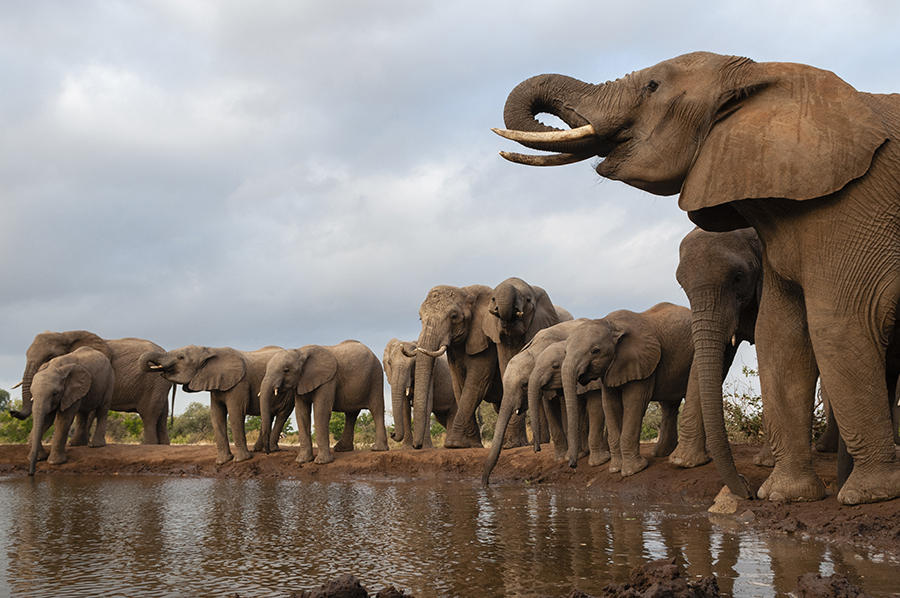 E. H.: Our human species has evolved under selection pressures, some of which we share with other primates. Yet cultural evolution also transforms the determining factors that can be observed in human societies in relation to other mammals. For example, can the issue of control over women’s bodies, and thus over reproduction, in humans be seen as part of a broader question encompassing other species? As zoologists, it is very difficult for us to answer that question. It’s up to anthropologists to assess whether the framework that we propose here can be useful in their work.

Video
What stressed squirrels can teach us

Article
How Many Sexes Are There?