Fossil Fuels: Drilling where it Matters

Fossil Fuels: Drilling where it Matters

In the quest to widen access to our planet’s limited reserves of fossil fuels, “fracking” has emerged as a drilling technique that injects pressurized water into shale rock deep underground: tiny fissures opened up this way connect to kerogen pockets from which hydrocarbons, namely oil and gas, can then be collected. First devised in the 1940s, the practice has expanded more broadly worldwide since the 1990s. Yet, as well as raising some environmental concerns, fracking doesn’t always live up to its promise, with fuel production sometimes petering out unexpectedly.

Could the failure of certain fracking operations to deliver as hoped be explained by the structure of the organic matter from which fossil fuels are extracted? This is what a French-American team rallying together the CNRS, the Massachusetts Institute of Technology, the Shell Technology Center in Houston (Texas) and the Total Technology Center in Pau (France), set out to explore. To find out, the scientists generated 3D images of the pore structure of fossil-fuel source rocks at a record subnanoscale before exploring, via computer simulations, how hydrocarbon molecules flow between these pores.1 By identifying the influence of pore size on the ease of fuel extraction, these findings pave the way towards new strategies for oil and gas extraction—with fewer risks of unwelcome surprises.

It's all about the Kerogen

Fossil fuels, whether exploited in the form of oil, natural gas or coal, derive from the same precious source: kerogen, an organic substance formed from decomposed living matter that gradually hardens into carbon-rich solid rock. Over time, as the matter is buried further underground, pressure or geothermal heat will break down its molecules into gas or oil that can be released by drilling. Variable in composition, kerogen has no specific chemical formula, and little was known about its structure until a group of scientists came up with a computer-simulated model of its nanostructure in 2016.2

Two years down the track, two members of this group—Roland Pellenq and Franz-Josef Ulm, both co-directors of the international joint research laboratory <MSE>2,3 this time joined by others, namely Daniel Ferry’s group at the CINaM4—have continued their kerogen investigations and gone on to set a new milestone. “Our study presents the first-ever 3D images of the nanopore network within a complex material of this type at subnanometer resolution,” Pellenq announces.

Given the intricacy of kerogen structure, the research group savvily combined techniques to produce a realistic model of kerogen's nanoporosity. In this way, the materials scientists, physicists and geologists used, as a base, experimental images of kerogen structure captured via electron tomography by zapping three tiny samples with a beam of electrons emitted by a transmission electron microscope. They then “superimposed these with data on kerogen texture obtained by digital-simulation calculations.” The 3D images of the three samples, thus reconstructed, come in at a resolution of under one nanometer—or 50 times better than previously achieved for this substance’s structure.

To check their suspicions that rock maturity—a question of exposure to heat and pressure over geological time—has an impact on pore size, the scientists chose to compare samples collected from different sites. Sure enough, their images show that immature kerogen has larger, more isolated pores while mature kerogen is riddled with finer, tightly interlinked pores. “Not only this,” adds Pellenq, “connectivity even proves to hinge on pore size: pores only link up when their diameter falls under a minuscule 2 nanometers.” 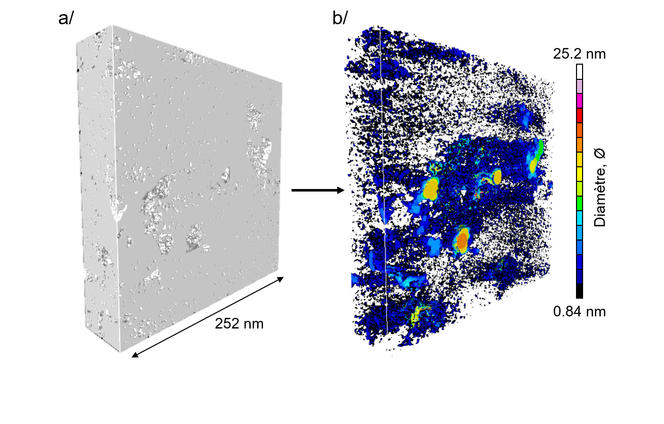 Using a high-resolution system called electron tomography, researchers probed a tiny sample of kerogen to determine its internal structure. At left, the sample as seen from the outside, and at right, the detailed 3-D image of its internal pore structure. 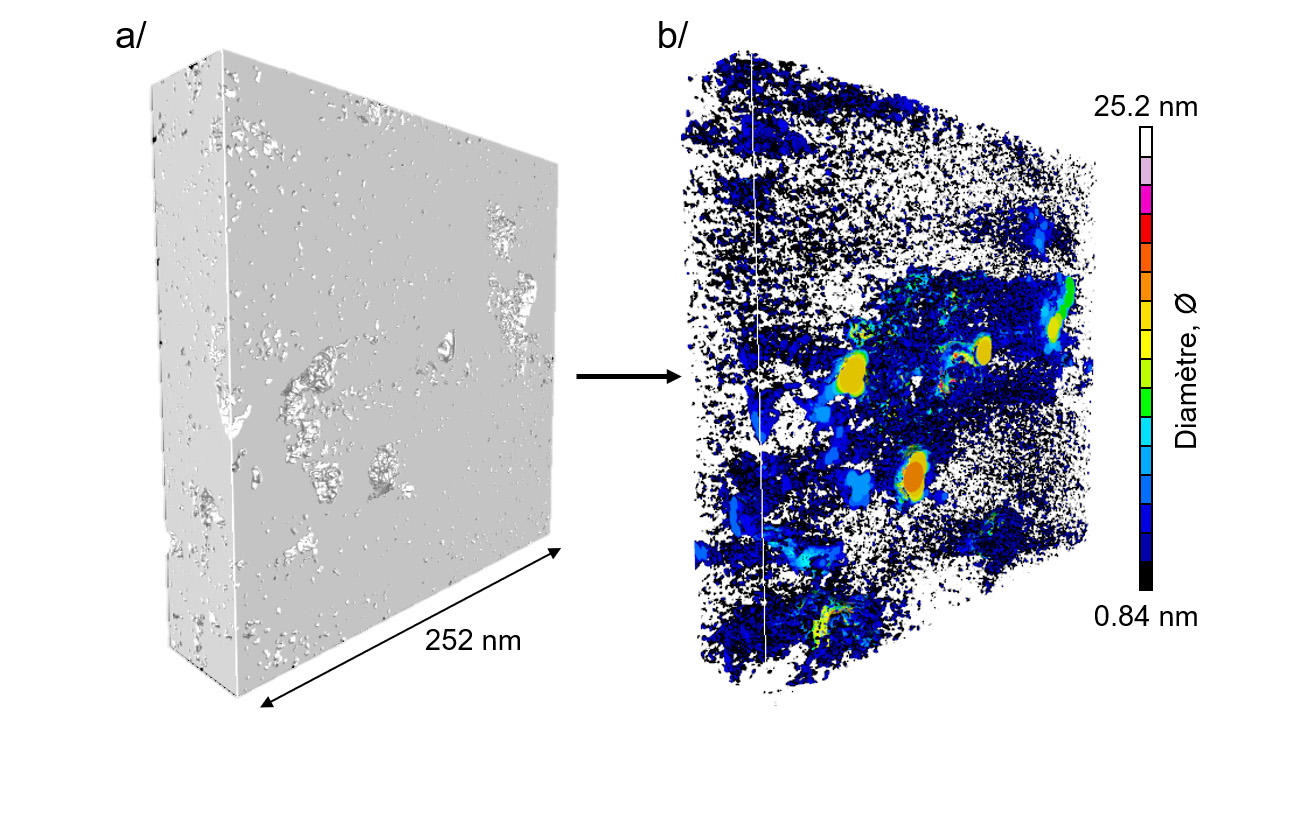 So how does all this affect the flow of hydrocarbon molecules through kerogen? With rock pores on such a small scale, everyday fluid-dynamics equations do not work. Instead, the researchers had to devise a specific mathematical model that factors in both adsorption (the tendency of a thin layer of molecules to adhere to a surface) and diffusion—two opposing phenomena that come into play when nanopores are at stake.

“Resulting simulations confirmed that hydrocarbon molecules are more likely to be recovered in the case of mature kerogen connected pore networks," says Pellenq. In other words, the observed cases of fuel production suddenly drying up can be explained by the immaturity of a kerogen deposit as hydrocarbon molecules get trapped inside its unlinked pores.

Now that the team has flagged the influence of kerogen pore size on a site’s minability, the door is open for the development of more effective fuel-extraction strategies. “These findings offer a guide on which sites to choose for drilling, by avoiding bedrock which will yield little or no fuel due to weak connectivity of its nanopores,” Pellenq notes.

Naturally, more targeted drilling will also help to hem in unnecessary risks of earthquakes and groundwater pollution associated with fracking. This, incidentally, isn’t the first time that the team has contributed to new fossil-fuel drilling approaches that foster smarter resource management: the <MSE>2 director points out that they “previously showed that using CO2 rather than water as a fracking liquid offers a solution for storing CO2 in kerogen, while significantly boosting production without an intensive use of water.”

And while this particular project has focused on kerogen and optimized drilling strategies, engineering and technological developments in a range of fields stand to benefit from this approach to decipher other complex substances. “Coupling computer models and electron tomography can also shed light on the nanotexture of cement hydrate as well as of combustion-engine particles from car or aircraft engine exhausts,” Pellenq suggests.

See author's bio
When Algorithms Target Athlete DopingPrevious
In Arizona, a Miniature Earth under a DomeNext