The series The Expanse depicts humanity in the twenty-third century, spread throughout the entire Solar System. For humans, gravity has become unbearable, and is used by some as an instrument of torture.
Alcon Entertainment/Sean Daniel Company/Collection ChristopheL
Share
Share
Space travel, an old human dream, is still no pleasure cruise. It involves major physiological and psychological challenges that researchers are working hard to take up.

At the end of 2020, Elon Musk, the dashing boss of the American aerospace company SpaceX, claimed to be totally confident in his company’s ability to send a first manned mission to Mars as early as 2026. However, before humans can set foot on the Red Planet – around 227 million kilometres from Earth – and return, a number of obstacles will need to be overcome that are not only technical, economic and political but also, as is too often overlooked, biological and psychological.

On the biological level, “spaceflight can cause disorders that are likely to affect astronauts’ health and/or prevent them from completing their missions successfully,” says Marc-Antoine Custaud, professor of physiology at the Université of Angers Mitochondrial and Cardiovascular Physiopathology (MITOVASC) laboratory1 in western France, and co-coordinator of a book2 published in 2020 on human physiological adaptation to space travel.

The main problem is the absence or reduction of gravityFermerAttractive force, such as that exerted by the Earth on objects on its surface, pulling them towards its centre and keeping them on the ground. when in space. For even if we are not aware of it, our bodies need to be constantly exposed to this force, which has helped shape life on Earth for millions of years. If it declines or disappears, “deconditioning” can occur, impacting all our organs and especially our muscles, bones and cardiovascular system. 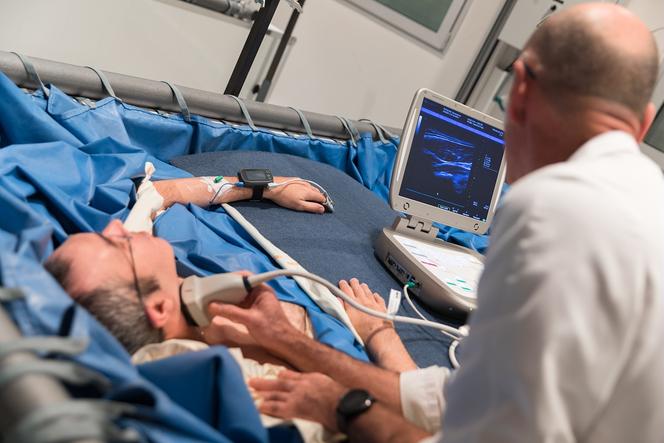 Dry immersion experiment at the MEDES Space Clinic in Toulouse (southwestern France). This model makes it possible to simulate the effects of weightlessness on the body and try a new preventative method aimed at reducing its impact (November 2018). 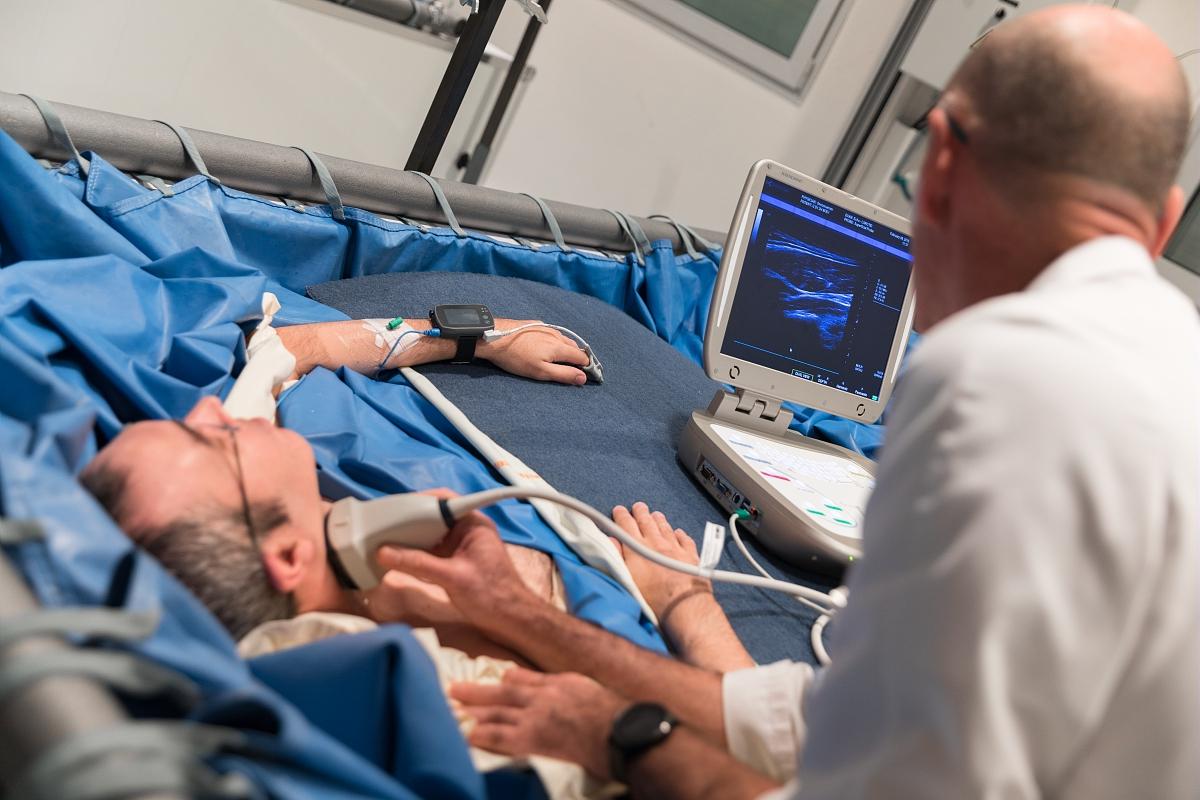 “In the absence of gravity, the leg and back muscles are no longer used and become weaker. Bones  lose calcium and the heart, its ability to pump blood through the body. Metabolic conditions caused by the lack of physical activity appear, such as an increase in blood lipid levels,” Custaud explains. As for the vestibular system, the organ located in the inner ear that is responsible for balance, “in space it no longer perceives the acceleration caused by gravity. As a result, once back on Earth, it interprets this acceleration as being due to motion, which explains the great difficulty astronauts have in standing up right when they first walk after landing”, points out Gilles Clément, CNRS senior researcher at the Lyon Neuroscience Research Centre (CRNL).3

In recent work,4 Custaud and his team have shown that microgravity can even impact cells: in weightlessness, the endothelial cells that line the interior of vessels and help dilate them are not sufficiently stimulated by blood flow, which prevents them from fulfilling this function properly.

Ever since the beginning of spaceflight in the 1960s, researchers have sought to develop ways of countering microgravity-related ailments through strategies designed to limit deconditioning during flights, such as endurance and resistance exercises to reduce muscular, bone and cardiovascular disorders, vibrations to reproduce impacts on bones, and so on. Such solutions are relatively effective for spaceflights in low orbit at altitudes of around 500 kilometres, and for lunar flights lasting a few weeks or months. However, “for extended space missions such as those planned for Mars, they will not be sufficient”, says Stéphane Blanc, CNRS senior researcher at the Hubert Curien pluridisciplinary institute (IPHC)5 in Strasbourg (northeastern France), who was appointed director of the CNRS’s Institute of Ecology and Environment (INEE) last February. Hence the need to improve these procedures.

“Comprehensive studies are underway in the United States, Europe, China, Russia and other countries to try and determine the amount and type of exercise to be carried out during long periods in space, the combinations of strategies that should be prioritised, and so on,” Blanc explains. It is also necessary to determine “the type of nutrition to adopt in order to limit muscle and bone loss, and whether food supplements and medication should be provided to that effect”, Custaud adds.

However, in addition to the complications described above, spaceflights to Mars and beyond could also bring about other physiological alterations for which there are as yet no specific countermeasures. For instance, “this type of mission could impair the vestibular system of the inner ear (which is also used to assess vertical speed) to such an extent that, in the event of a manual landing on another planet, this could cause the pilot to over- or underestimate the descent velocity, and increase the risk of a crash,” Clément explains.

“A mission of this kind could also affect ‘sensorimotor performance’, the ability to coordinate vision and motion and thus perform accurate movements. This could be detrimental to managing precise tasks on Mars, such as pressing the right button at the right time,” adds Lionel Bringoux, a neuroscientist at the Marseille Institute of Movement Science – Etienne-Jules Marey (ISM).6 The researcher has recently studied the ways in which our brain is able to adapt and make neuromuscular adjustments in microgravity,7 which can be reproduced on Earth by means of parabolic flightsFermerA flight in which an aircraft temporarily and repeatedly follows a parabolic trajectory so as to create a situation of weightlessness for around twenty seconds.. In a nutshell, the physiological dysfunctions that can occur specifically during extended spaceflights need to be further investigated, and appropriate solutions developed. 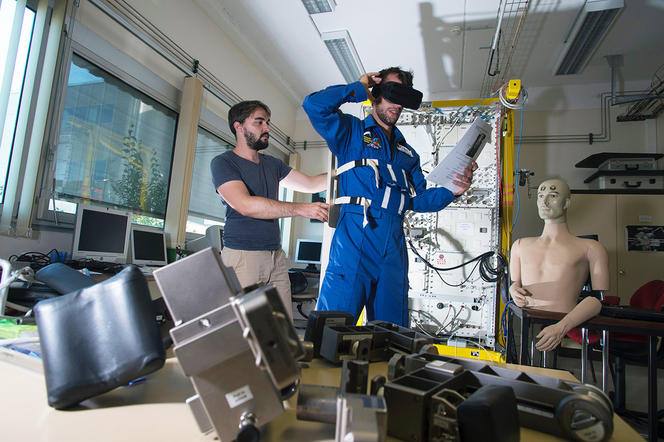 The GRASP experiment, devised by the CNRS and Université Paris-Descartes, aims to test the impact of weightlessness on hand-eye coordination and assess how the nervous system adapts to that environment (Toulouse space centre, 16 August 2016). 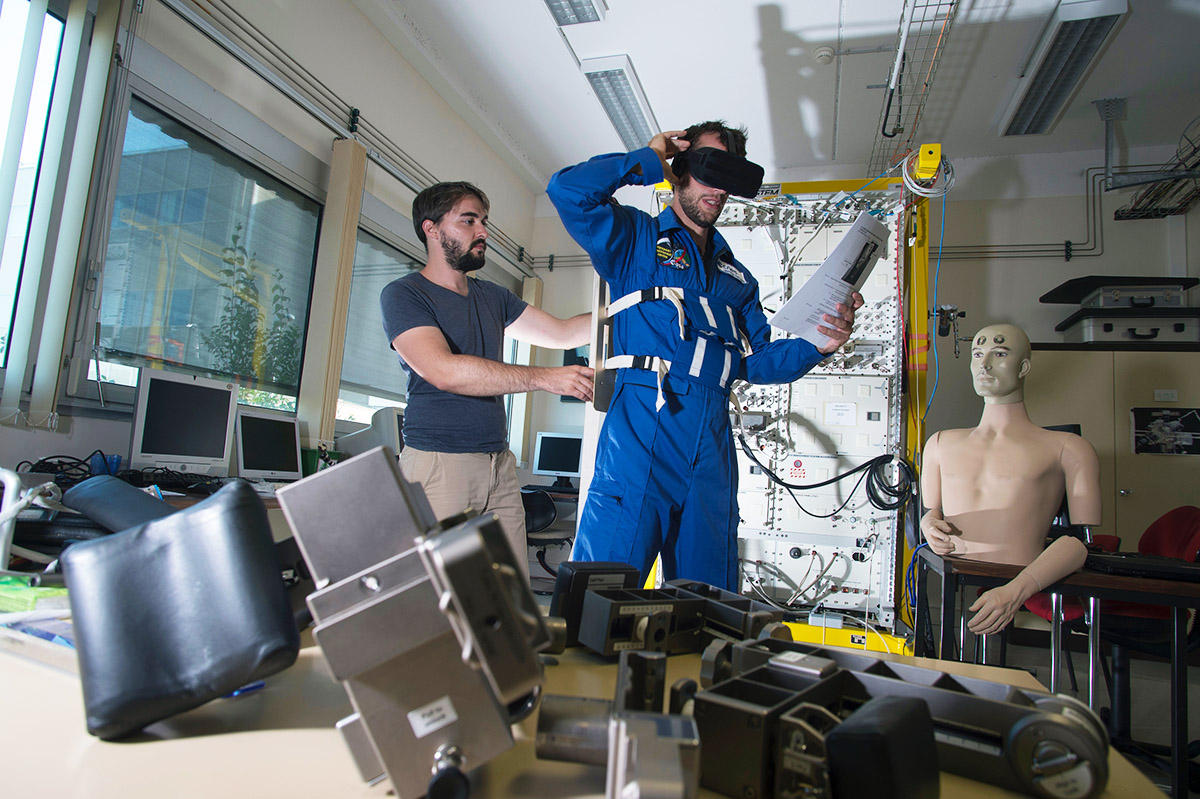 This is precisely what Michele Tagliabue’s team at the CNIC laboratory8 in Paris is working on, as part of the GRASP experiment. Initiated in 2016 by the French astronaut Thomas Pesquet during his Proxima mission on the International Space Station, the project aims to test the impact of long exposure to weightlessness on hand-eye coordination (where vision helps guide movements) and devise countermeasures to ensure that gestural precision is maintained. The team will also take part in the study “Pilote”, which is due to be conducted during Pesquet’s new Alpha mission, launched in April 2021, and whose aim is to look at how, in microgravity, the brain succeeds in combining visual and haptic information (relating to the sense of touch) to handle high-precision tasks such as controlling a robotic arm or a space vehicle.

The lack of gravity is not the only constraint astronauts will face. For journeys to Mars and beyond, other sources of physiological disorders will need to be taken into account, especially cosmic radiation. On Earth, life is protected from these streams of high-energy particles, which mainly originate in the Sun, by our planet’s magnetosphere. The International Space Station, orbiting at an altitude of 400 kilometres, is also kept safe by this sort of magnetic shield, whose range does not however extend as far as Mars. 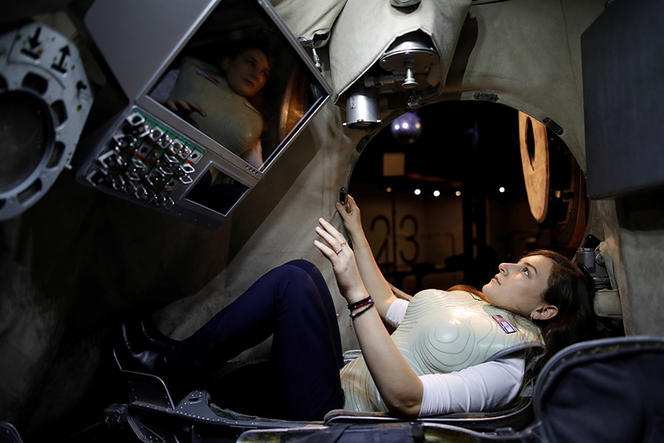 Demonstration of a prototype vest developed by the start-up StemRad to protect astronauts from radiation. 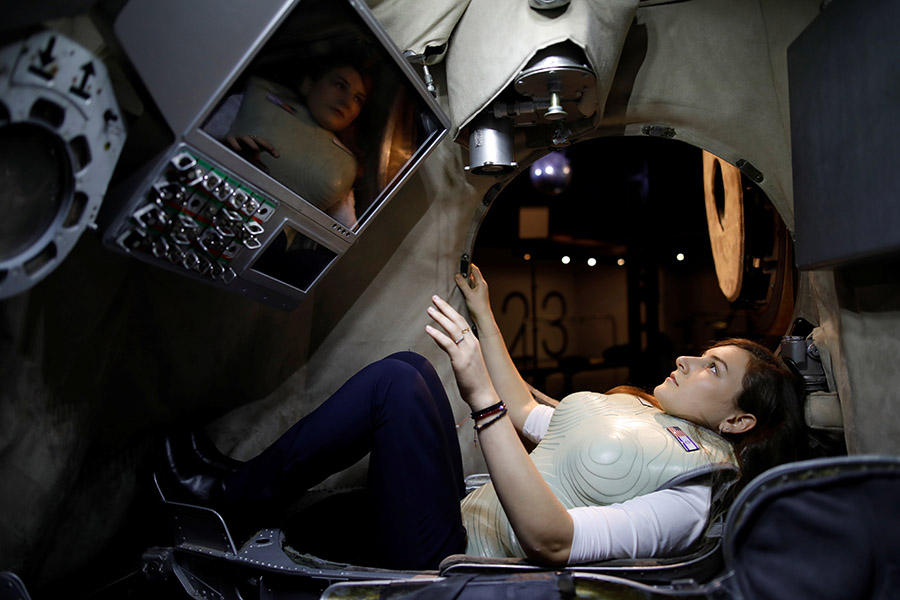 The problem, as Blanc explains, is that “cosmic radiation can cause potentially lethal cancerous tumours”, which requires the development of effective, inexpensive protection systems. Several promising approaches are being explored, such as “deploying an antiradiation shield around the spacecraft, integrating protective features into the astronauts’ spacesuits, devising antioxidant-based food supplements, and so on”.

Apart from physiological barriers, an expedition to Mars will also have to overcome the psychological issues inherent to our human condition. Extended spaceflight will mean prolonged confinement with a limited number of people, with no way of communicating with the Earth in real time. As previously demonstrated by various experiments in extreme, remote, confined environments, such as the Concordia Station in Antarctica, this type of situation can exacerbate stress and lead to conflict among crew members. “All the conditions for murder are met when you put two people in a cabin measuring six by six metres and leave them there for two months,” Russian cosmonaut Valeri Ryumin is quoted as saying. 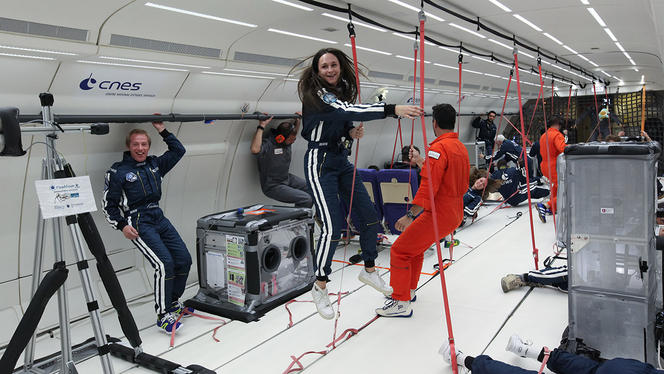 In an effort to understand the body’s reactions to microgravity, experiments are carried out during parabolic flights. This one was performed in 2017 by the Marseille Institute of Movement Science (ISM) on board the Airbus A310 Zero-G. 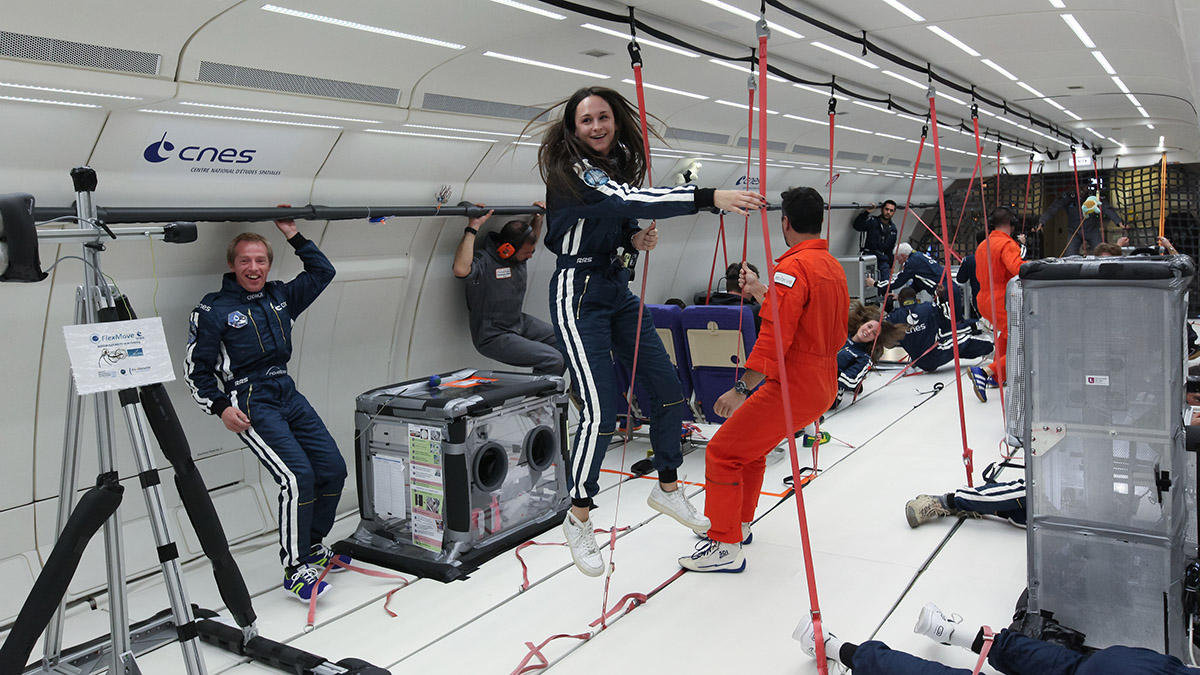 “Even when the participants are volunteers, remoteness and confinement are daunting challenges,” say psychologists Michel Nicolas, at Université of Bourgogne, and Benoît Bolmont, from Université of Lorraine, co-authors of one of the chapters in the book “L’Humain et l’espace”. The two scientists believe that certain factors could compound the risks, and in particular “cultural and gender-related differences within the crew”, which “could cause stress and interpersonal conflicts linked to language and cultural diversity”. According to Custaud, “it will be necessary, when selecting the team, to determine beforehand whether it should be mixed, international, and so on.” Finally, there remains a crucial question that also relates to our physiology: could journeys to distant regions of space cause the human species to evolve to such an extent that a return to Earth’s gravity could only be achieved at the cost of severe suffering or an increased risk of rapidly dying from a heart attack, rather as foreseen in the sci-fi series The Expanse?

“To induce major physiological changes, there needs to be a series of selection pressures caused by the environment, which gradually results in individuals with the best-adapted physical characteristics being more likely to survive and eventually be selected. However, it takes tens or even hundreds of generations for a process of this kind to occur, and extended spaceflights are unlikely to last more than a few years at most,” Custaud points out. He nonetheless stresses that “subtle changes can arise, linked to so-called epigenetic chemical modifications, which don’t happen in the DNA sequence itself but in its immediate surroundings”. Such alterations, which can take place in a single generation and be passed on to offspring, modify gene expression and in this way can cause small, environmentally-related functional variations that are not immediately noticeable, such as “a higher risk of developing a cardiovascular disease or diabetes, or reduced susceptibility to space sickness”.

In any case, given the physiological and psychological hurdles that need to be overcome before man can hope to walk on Mars, the opportunity to verify whether such micro-evolution can happen is not around the corner. Neither is the launch of such an expedition, whatever SpaceX’s whimsical boss may think. And yet, as Custaud insists, “we’re nearly there! The hugely competitive atmosphere between the various space powers in this field is the best spur to making this journey possible”.

See author's bio
Is ventilation the ultimate weapon against Covid-19?Previous
Modern-day slavery is the exploitation of vulnerabilityNext

Article
Pasteur beyond the legend
physiology

Video
Breathing on top of the world

Article
A Sedentary Lifestyle is the Sworn Enemy of our Health