Home / Articles / Biomechanics off to a flying start in BMX racing

Biomechanics off to a flying start in BMX racing

Home / Articles / Biomechanics off to a flying start in BMX racing

Biomechanics off to a flying start in BMX racing

Quarter-finals of women's BMX racing during the 2020 Tokyo Olympic Games in Japan, Ariake Urban Sports Park.
Matthew Childs / Reuters
Share
Share
BMX racing, which has been an Olympic sport since 2008, is the cycling event that requires to apply the greatest force to pedals. Researchers at the Pprime Institute were approached to help competitors and their trainers better assess their movements and improve their performance.

High-level athletes have to make increasingly quick and precise movements. Science is more and more being sought out in this quest for precision and accuracy, especially in the run-up to major events such as the 2024 Paris Olympic Games. At the interface between engineering, mechanics, and medicine, biomechanics is among the most valued disciplines for improving performance. “Biomechanics is the application of mechanics to living systems, in particular the human body,” explains Mathieu Domalain, an academic at the Pprime Institute (P').1 “Traditionally there are two approaches. The first, which is also mine, involves studying movements, but other scientists are interested in the resistance of materials and biological tissue. My colleagues and I are developing a more macroscopic methodology in which we analyse for example the effort exerted by muscles and joints.”

Domalain's research initially involved ergonomics as well as physical medicine and rehabilitation, in an effort to support physicians in their diagnoses and choice of therapeutic solutions best adapted to each patient. These studies were notably conducted with Poitiers University Hospital, in western France. Domalain then gradually concentrated on palaeontology, using the morphology of fossils to gain a better understanding of the links between physical activity and the evolution of the human lineage. He also and mostly focuses on high-level sport.

BMX rider in waiting position behind the starting gate. The backpack contains a system recording the force exerted on the pedals (analysis conducted in 2019 near Paris, at the training and competition track used by riders from the French national team).

BMX rider in waiting position behind the starting gate. The backpack contains a system recording the force exerted on the pedals (analysis conducted in 2019 near Paris, at the training and competition track used by riders from the French national team).
Laboratoire Pprime
Laboratoire Pprime
Share
Share

“In this context, biomechanics can steer performance. Trainers and their teams have their eyes and experience, while we rely on numbers to contribute to the gestural technique that is used, so that athletes and their staff can make informed decisions. We help them understand the human body in performance situations, based on the analysis of speed, joint angle, and intersegmental coordination. That's how they'll shave off that tenth of a second that makes the difference between first and second place.”

The Pprime Institute where Domalain works was sought out by the French cycling federation (FFC) to provide scientific support for its trainers. Over the last thirty years, the research centre has been working with various organisations to study sport gestures, especially with the French National Institute of Sport, Expertise, and Performance (INSEP), and the Poitiers-based Centre for Sports Resources, Expertise, and Performance (CREPS). The latter is tasked, among other things, with training the managers of sport federations and help youth attain high levels of athletic performance. The CREPS in Poitiers is distinctive in that it has its own research and development unit. “The CREPS provides expertise that is tailor-made for the sport and trainer, with concrete solutions and ongoing support. As researchers we do not share the same time scale, but there is genuine complementarity in terms of know-how.” 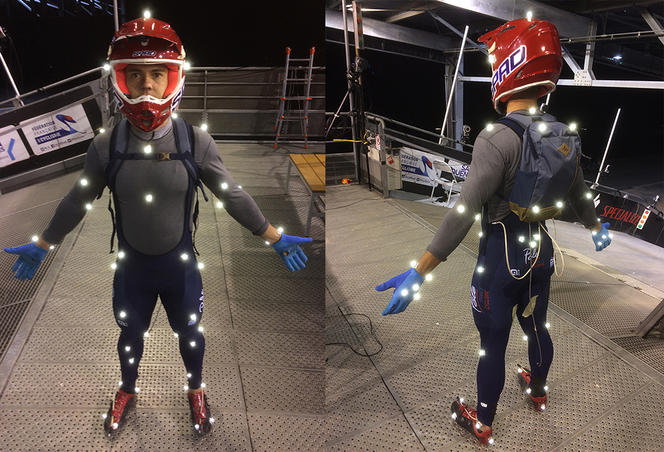 This rider is equipped with retro-reflectors (grey balls) that can be seen by the electro-optical camera system. They are placed at each major joint, and reflect radiation that is picked up by the cameras, making it possible to follow the trajectory and perform kinematic analysis of the gestures. 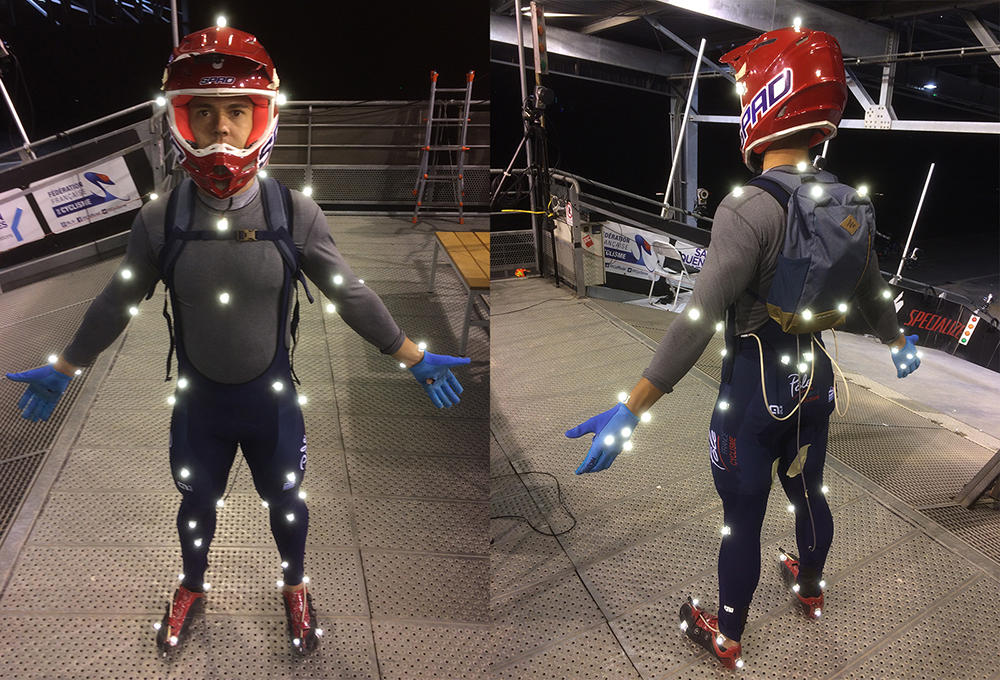 This rider is equipped with retro-reflectors (grey balls) that can be seen by the electro-optical camera system. They are placed at each major joint, and reflect radiation that is picked up by the cameras, making it possible to follow the trajectory and perform kinematic analysis of the gestures.
Laboratoire Pprime
Laboratoire Pprime
Share
Share

The Regional Centre for Innovation and Technology Transfer (CRITT), located in Châtellerault, about twenty minutes from Pprime, is dedicated to sports and leisure, and is headed by a former P' PhD student. These three organisations, united through the CAIPS centre for the analysis of sport images and performance, offer a particularly attractive ecosystem for providing sport federations with performance improvement support. The request from the FFC was in connection with BMX racing. BMX actually features in two different forms at the Olympic Games: racing involves eight competitors on a pump track dotted with bumps and banked turns, while freestyle requires to perform figures on the ground and in the air. P' researchers study the effectiveness of each rider's gestural technique, as well as the influence of equipment characteristics, such as the geometry of the bicycle frame, the length of the pedal cranks, etc.

For this purpose, they use the traditional tools of biomechanics, especially an electro-optical system consisting of fifteen high-speed cameras, which capture motion thanks to the reflective markers attached to anatomical landmarks. Algorithms use the coordinates of the recorded points to analyse movement dynamics. The effort also involves the analysis of forces. “For BMX, we use special sensors to better understand the interactions between the foot and the pedal. BMX riders are the cyclists who exert the greatest force on their pedals, as the trial only lasts about 40 seconds, during which they sprint, jump, and take particularly sharp turns. The equipment can measure the magnitude of these forces as well as their orientation, thereby ensuring the effectiveness of the pedalling movement.” The sensors were designed by Sensix, a company that grew out of the research of a former P' doctoral student, although the institute is also seeking to develop its own measurement devices.

Assignments are on the increase as the 2024 Paris Olympic Games draw near. In late 2020, following a call for research proposals relating to Very High-Performance Sport led by the French authorities, six projects were allocated eight million euros. Domalain is participating in one of them, PerfAnalytics, headed by Lionel Reveret at the French National Institute for Research in Digital Science and Technology (INRIA) in Grenoble (southeastern France). “The purpose of PerfAnalytics is to provide measurement tools – especially video – for daily use by trainers. We have all of the necessary equipment in the laboratory, but it is not suitable for embedded measurement.” Numerous studies are underway, for instance on modified exercise bikes, which are necessarily different from their competition counterparts. This difference is even greater with BMX racing, as it is impossible to simulate the rider's jumps or the bumps in the track, essential to the sport.

Motion reconstruction based on a modelling of multibody dynamic systems. The green arrow indicates the force exerted on the pedal.

The objective is therefore to conduct measurements and analyses at training and competition sites. This can be done via wireless transmission, the miniaturisation of sensors, and the development of alternatives to the reflective markers used in motion capture. Artificial intelligence tools, including deep learning, have also been designed to directly analyse the data from more traditional video cameras. All of which should significantly bolster the arsenal available to trainers and competitors.