Home / Articles / Athletes and Scientists Together for the 2024 Olympics

Athletes and Scientists Together for the 2024 Olympics

Home / Articles / Athletes and Scientists Together for the 2024 Olympics

Athletes and Scientists Together for the 2024 Olympics

Eliott PIERMONT/REA
Share
Share
This month saw the launch of Sciences 2024, a research project that is unprecedented in France. Its objective is to optimize the performance of French athletes, and to contribute to their success at the Olympic and Paralympic Games that will take place in Paris in 2024. Christophe Clanet, a CNRS physicist and the director of the project, explains.

What is Sciences 2024?
Christophe Clanet:1 It’s a program that we launched at the École polytechnique in early 2018 with Frank Pacard, director of teaching and research, in view of preparations for the Paris Olympic and Paralympic Games in 2024. It is designed to help athletes in their quest for improved performance, across 40 Olympic and 20 Paralympic sports. It currently involves approximately fifty researchers and one hundred students in the hard sciences from eleven of France’s grandes écoles2 and universities should join this program soon as well. Until now, it has essentially been teams from the Sciences et techniques des activités physiques et sportives (STAPS) and the medical sciences that have been involved with athletes. This is therefore the first time in France that physicists, mechanical engineers, and mathematicians have jointly engaged with athletes. The collaboration between athletes and researchers will lead to the implementation of  500 research projects over the next five years, 50 of which were selected in July by our Scientific Board. These include, for example, two projects being conducted at the École polytechnique on racing wheelchairs and the jumping blades used in Paralympics track and field.

The ambition of French athletes for this Olympiad, formulated by the Minister of Sports Laura Fessel, is considerable...
C.C.: The goal is indeed to win 15 medals at the Paralympic Games, and to double the number of Olympic medals, which has been stuck at 40 for six Olympiads. Quite a challenge.

This is therefore the first time in France that physicists, mechanical technicians, and mathematicians have jointly engaged with athletes.

To date, the only countries that have doubled their number of medals in two Olympiads are Australia in Sydney in 2000, and Great Britain in London in 2012. They leveraged every avenue for improving performance, including creativity, spirituality, talent, quality of life and medical treatment, nutrition, and psychology, along with technology and science. Of course, we are not saying that science is the cornerstone for sports success, but it can contribute by supplementing existing measures.

How can physics and mathematics help athletes get on the podium?
C.C.: Whatever the type of race, the gap that separates the winner from second place is less than a percent: it’s on the order of a hand in swimming (or 20 centimeters out of 100 meters), a boat length in rowing (20 meters out of 2 kilometers), or a foot in the biathlon... as when Martin Fourcade won the race at the PyeongChang Games in 2018. This means that if you gain just one percent by reducing the friction of skis on snow, for instance, you can go from second to first place. Two years ago, my laboratory and that of Lydéric Bocquet at l’École normale supérieure in Paris were sought out by the team of the biathlete Martin Fourcade to design a ski wax adapted to the temperature and humidity conditions in Korea. Optimizing equipment specifically for an athlete can enable him or her to gain those precious percentage points.

How did you define your research objectives?
C.C.: The researchers involved in Sciences 2024 are really working for athletes. Our work thus begins with an extraction phase, in which we attend training sessions and discuss with the athletes, their trainers, and federation technical staff. Together we identify a list of questions that we believe we could answer. Finally, they establish priorities based on this list. We set to work in our laboratories, and then meet with them again. They have three types of needs: to develop a measuring tool (new sensor), validate their beliefs, and identify an optimum. For example when you look at rowing, where the most important thing is that the athletes row in unison, we are working on designing a tool that can measure the synchronization of rowers and oars. Today it's the trainer's eye that does this type of measurement. This type of measuring tool will offer monitoring over time, which is invaluable for making progress. 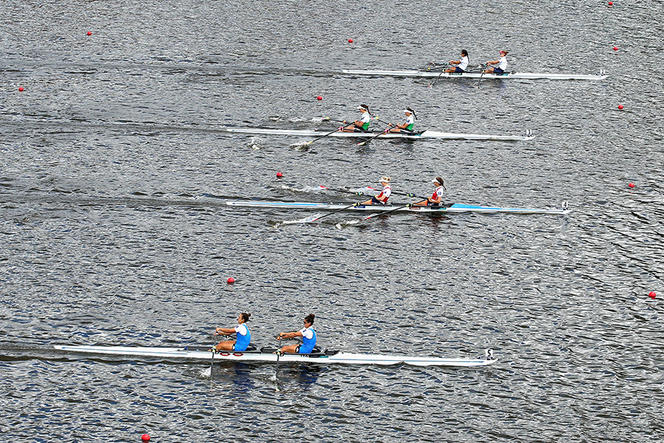 Scientists are working on a tool to measure the synchronization of rowers. Pictured here is the finish from the women's "double scull" at the most recent European Championship held in Glasgow on August 4, 2018. 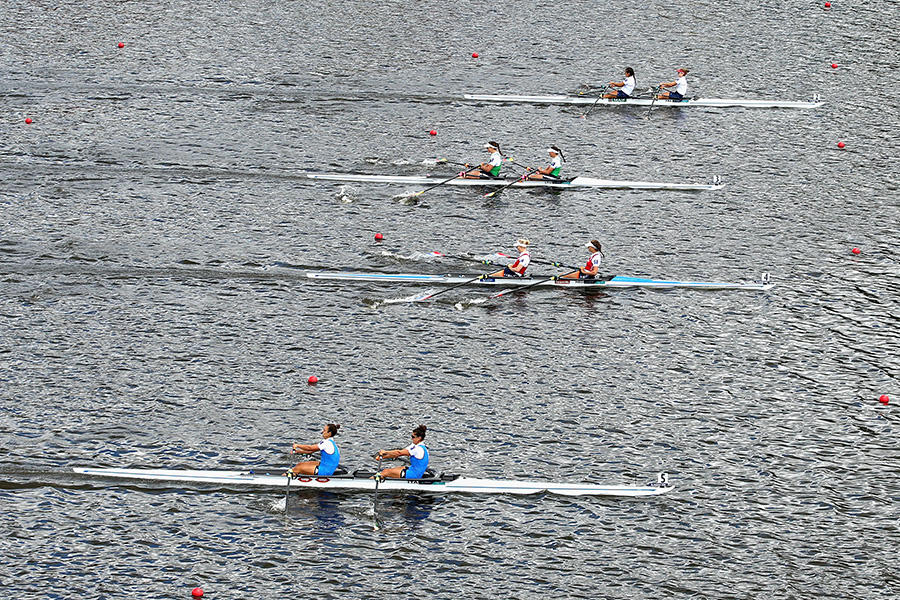 So you give them the means to verify whether their intuitions are right.
C.C.: Yes, that's the second type of question, as athletes ask us to validate or invalidate their beliefs. For instance, certain national rowing teams have been rubbing their boat with emery for years, because they are convinced that a coarse hull moves faster than a smooth one. This question, which was a priority for the athletes, represented a materials science problem for our physicists: we are going to study the surface friction of textured and smooth surfaces, both hydrophilic and hydrophobic, and correlate it with navigation speeds. We will also determine the optimal shape for the hull–symmetrical like today’s oars, or asymmetrical–and hope to eventually have one produced by a French manufacturer (current high-performance hull manufacturers are either Italian or German).

Finally, you’ve identified the ideal equipment or conditions for use.
C.C.: That's the third focus of our research. Athletes want us to define optimums for them. In wheelchair racing, for example, they wonder what tires they should use—wide or narrow—and at what pressure to reduce friction on the Tartan track.

The goal is to win 15 medals at the Paralympic Games, and to double the number of Olympic medals, which has been stuck at 40 for six Olympiads.

If they are too wide or underinflated, the wheels have a large contact surface. If they are too thin and overinflated, they sink into the track's surface, generating significant friction. We’re therefore trying to develop a rule to find an optimum for each track. Another example is in the Paralympic long jump, in which athletes have followed Franck Barré's example by jumping off of their prostheses. So it's a question of designing the prosthesis that is best adapted to each person's physiological properties. And this is something that can’t be neglected, given that the German Olympic champion Markus Rehm jumps a meter further than the person who comes in second...

Is this all fair competition?
C.C.: When it involves "mechanical" sports, in the sense of sports in which you use a "machine," it is important to define what falls under "cheating" or technological doping. As in cycling, which forbids external sources of energy, whether it be by battery or hidden motor, the fight against technological doping will become an issue in the same manner as the fight against medical doping. The question is whether we give exactly the same equipment to each team, or whether each nation has the right to use its own, which is currently the case. Under these circumstances, each country can optimize its sports equipment, of course on the condition of being able to finance research, which is very burdensome. It’s no coincidence that the rankings of countries based on their number of medals and their gross domestic product are almost identical. However, this also depends on the will of each country to invest in sports research; if Great Britain places second in the number of medals today, even though it was thirty-sixth in 1996, it’s because it funded this sector. This is not yet the case in France, where there was very little exchange between science and sports. For that matter, we had to launch a fundraising effort for dissertation subjects and postdoctoral positions connected to Sciences 2024, as each project costs 200,000 euros. 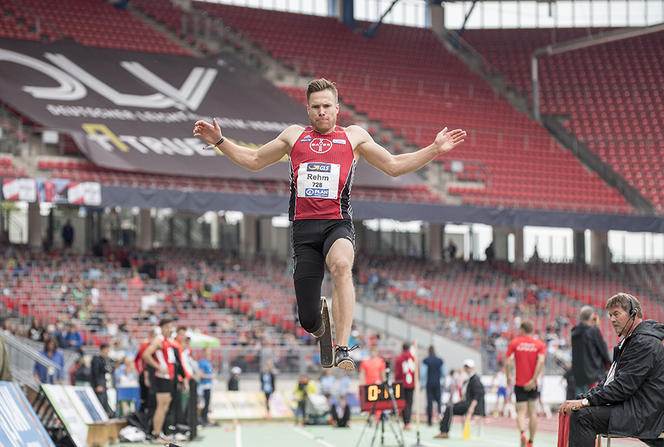 The research will attempt to find an "optimum" for the prostheses used by Paralympic athletes. Pictured here is Markus Rehm, the world record holder in his category for the long jump. 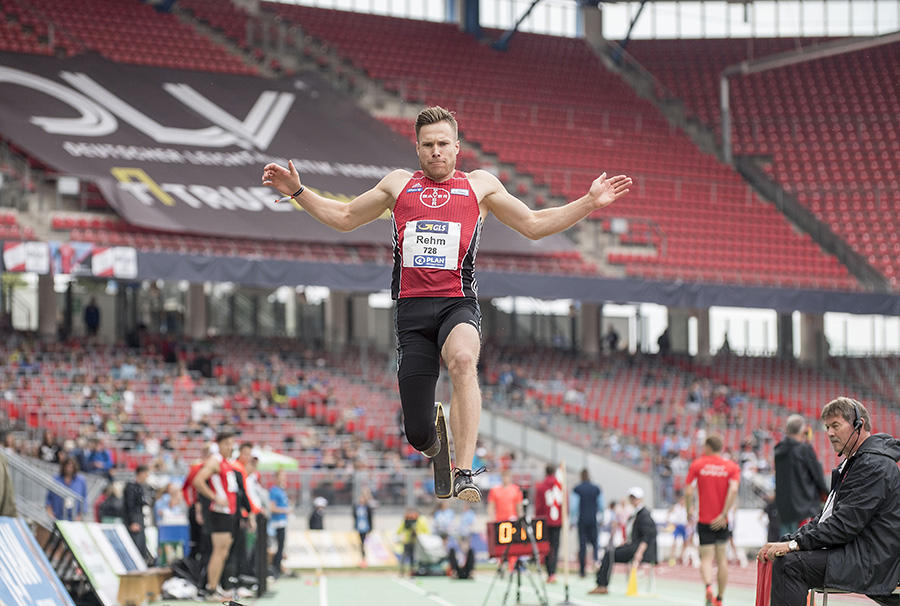 Has this collaboration between athletes and researchers borne fruit on other levels?
C.C.: Yes, because beyond the performance of athletes at the Paris Games, this project will continue through the development of technical innovation, which can potentially be of use to a wider public, for instance with the prostheses or wheelchairs developed in Paralympics. It will also help launch startups, such as Phyling, which specializes in the development of specific high-performance sensors, data gathering, and analysis. In the area of health, our work on weightlifting, through which we have characterized the typology of muscle fibers for athletes, will let us identify early-onset muscle illnesses in collaboration with the Garches hospital (Hauts-de-Seine). Finally, Sciences 2024 will use Roxana educational kits to promote the teaching of science in junior high schools and high schools, through the use of examples drawn from sports. This project is led by our ambassador, the Olympic Silver Medalist in swimming, Roxana Maracineanu. Together this series of actions will create the legacy of Sciences 2024.

Article
Biomechanics off to a flying start in BMX racing