In cities, the food that sparrows find may be too high in carbohydrates and too poor in protein, which would affect the development of chicks.
LUNYANSKIY/FOTOLIA.COM
Share
Share
Over the last decades, sparrow populations dramatically decreased in European cities. Recent studies point to noise and food as key factors in this decline.

“In only a few decades, the sparrow has practically disappeared from London," points out Frédéric Angelier, from the CEBC.1The bird has even been put on the red list of endangered species in the UK. While this alarming observation has already been confirmed by a host of other studies in Europe, the reasons for this decline are still unknown. Angelier and his colleagues2 therefore decided to look further into this phenomenon. After describing the harmful role of urban noise, their latest study shows that food in urban environments, mostly derived from human activity, could contribute to sparrow population losses in cities, by affecting chick survival and growth.

The city sparrow, a sentinel species in danger

Although living among humans proved quite beneficial to sparrows for thousands of years, their recent decline suggests that something may have gone wrong. This is all the more of concern as the sparrow is a sentinel species: it acts as an early indicator of environmental change. Studying it in its ecosystem, whether it be a city or rural area, can help researchers assess the impact of such change. “The sparrow is subservient to the urban medium: it relies on humans for its habitat and food in cities, “says Angelier. It is constantly confronted to the transformations—sometimes quite drastic—of this environment. Studying it sheds light on how urban biodiversity, and to a certain extent, human beings themselves, can be constrained or limited.” Beyond their evident differences, man and sparrow are vertebrates, and therefore share similar mechanisms, the researcher points out. Studying sparrows can thus provide invaluable information on how a host of factors affect human physiology.

The sparrow is subservient to the urban environment: it relies on humans for its habitat and its food in cities.

The latest CEBC survey was carried out over three months in 2013 in the western region of Poitou-Charentes (France). Over that period, 110 sparrows—68 adults and 42 chicks—were studied in four sites (Niort and La Rochelle for urban centers, and Villefollet and Villiers-en-Bois for the rural sites). “This gave us an overview of the impact of urbanization on the size of the birds, their physical condition, stress levels etc.,” explains Angelier. “The specimens, captured with nets, were measured, weighed, and blood samples were taken. They were released almost immediately on the same spot, with no harmful consequences.

More precisely, researchers measured the sparrows’ fat and muscle reserves, the size of their beaks, legs, and wings, as well as levels of hematocrit and corticosterone, the stress hormone.

“Our study demonstrates that urban individuals are smaller in size, which strongly suggests that they do not develop optimally in urban centers. Furthermore, we also showed that the chicks had more fat than their rural counterparts, pointing to significant dietary differences which could explain that their development is not quite as satisfactory,” explains Angelier.

In cities, sparrows' diet could be too rich in carbohydrates and too low in proteins. These birds are very opportunistic and consume any food available. Although granivorous, they rely on insects for their protein intake. Yet to make up for the lack of insects in urban centers, they might instead turn to food from human sources. “If urban food has its advantages, especially in winter, when grains are scarce, the shortage of protein-rich insects in cities could be one of the main causes of sparrow population decline,” adds Angelier. This deficient diet has a significant impact on the nutritional and physiological state of sparrows and their offspring.

It could also have indirect consequences on the development of chicks, which lack protein-rich food, but also on the fertility of adults, as their physical condition would not be optimal during reproduction.

Is diet alone to blame? “We need to be careful at this stage,” says Angelier. “There can be many reasons for this situation. The urban environment is very complex and characterized by a number of factors, such as food, of course, but also atmospheric pollution, artificial lighting, electromagnetic waves, or noise.” The latter was investigated by the same team in a previous study, which concluded that constant city noise could disrupt the singing of birds and seriously affect the behavior of sparrows and their chicks. The perpetual commotion interferes with their ability to find suitable mates. Furthermore, parents quickly take flight—the uninterrupted noise increases their vigilance—especially to compensate for poor auditory perception of threats in their environment. While this adaptation increases the parents' chances of survival, it reduces that of chicks. Noise pollution also means that parents cannot always hear their chicks and feed them when needed. “It is possible that a combination of all these factors can exceed the capacity of organisms living in urban environments to adjust or adapt, which could explain their recent decline,” says the researcher. 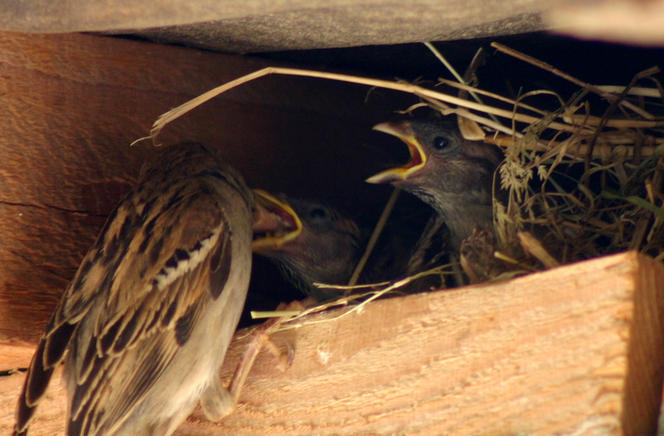 The non-stop hubbub of the cities prevents sparrows to hear their chicks and feed them when needed. 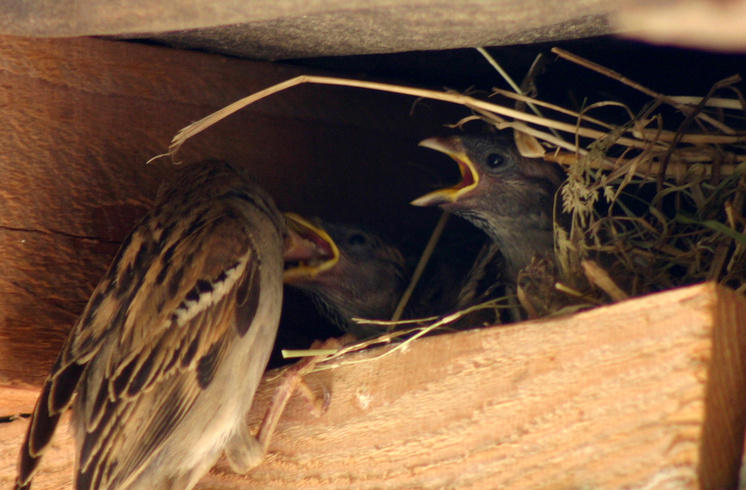 An extensive research project on plummeting sparrow populations, to be conducted on a larger scale in collaboration with the Museum national d’Histoire naturelle3 and the League for the Protection of Birds in the Paris region4is underway. This study, which involves more than 30 sites and 900 sparrows, is currently in its 13th annual observation phase. For the CEBC team, its findings, expected next spring, will confirm the results at the national level in France. “To raise awareness, it is necessary to identify not only the environmental factors that affect these bird populations, but also study the physiological mechanisms that help them adapt or not to changes. To this end, a multidisciplinary approach that ties in ecology and physiology is essential,” Angelier concludes.

Article
Pasteur beyond the legend
ornithology