Home / Articles / Rising from the Ashes

Rising from the Ashes

Rising from the Ashes

This box kept at the Institut de France was used to transport six charred papyrus scrolls in 1802 .
C. DELATTRE
Share
Share
Researchers have developed a new X-ray technique to see the contents of ancient rolled-up scrolls without opening them. This can prove invaluable for studying extremely fragile or partly damaged samples.

Using a new X-ray imaging technique, an international collaboration1 including researchers from the IRHT2 succeeded in revealing some of the contents of two charred papyrus scrolls without unrolling them. Buried by the eruption of Vesuvius in 79 AD, the rolls of parchment were part of a library uncovered in Herculaneum’s so-called “Villa of the Papyri” in the mid-18th century. Preserved by thick layers of volcanic material, hundreds of them have survived to this day, although their extreme brittleness prevents them from being opened unharmed. 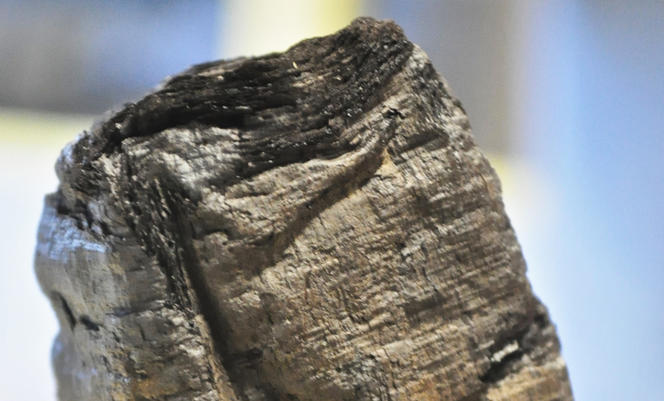 Detail of the carbonized scroll PHerc.Paris.4. 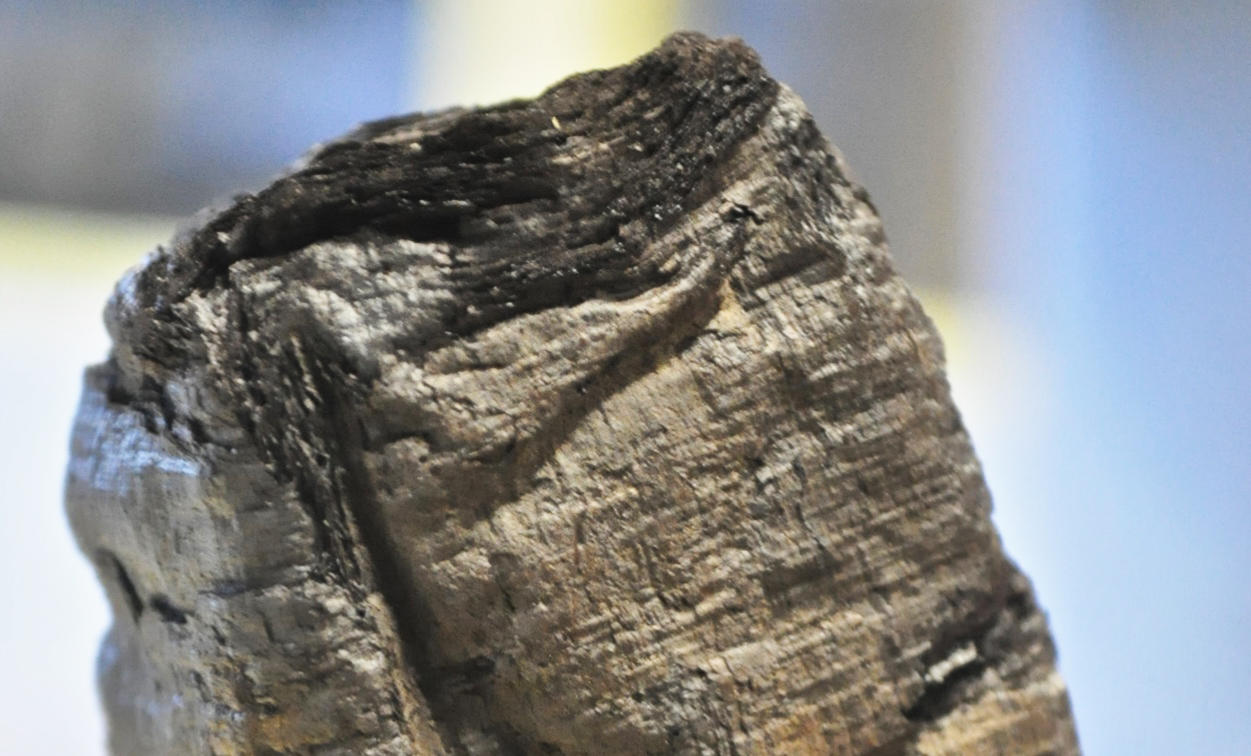 While previous attempts to decipher rolled-up manuscripts using conventional X-rays proved unsuccessful,3 X-ray phase-contrast tomography (XPCT) enabled this breakthrough. The experiment was conducted at the Grenoble synchrotron (ESRF), the only such facility in Europe that can achieve the high energy levels required to obtain sufficient image quality for that purpose. Based on refractive index variation, the XPCT technology makes it possible to distinguish between the carbonized paper and the carbon-based ink obtained from smoke residues that was used in antiquity, notwithstanding their similar densities. 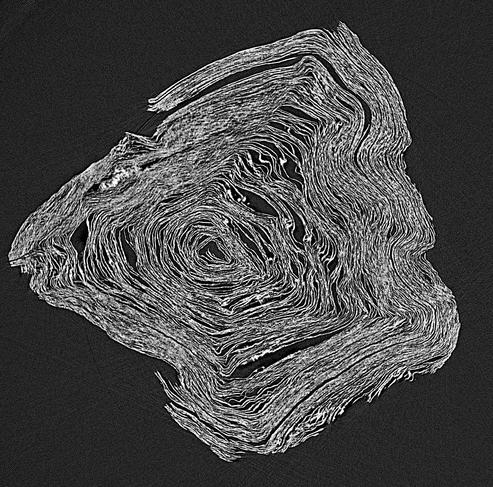 Volume rendition of the reconstructed papyrus, which highlights the huge complexity inside the scroll. 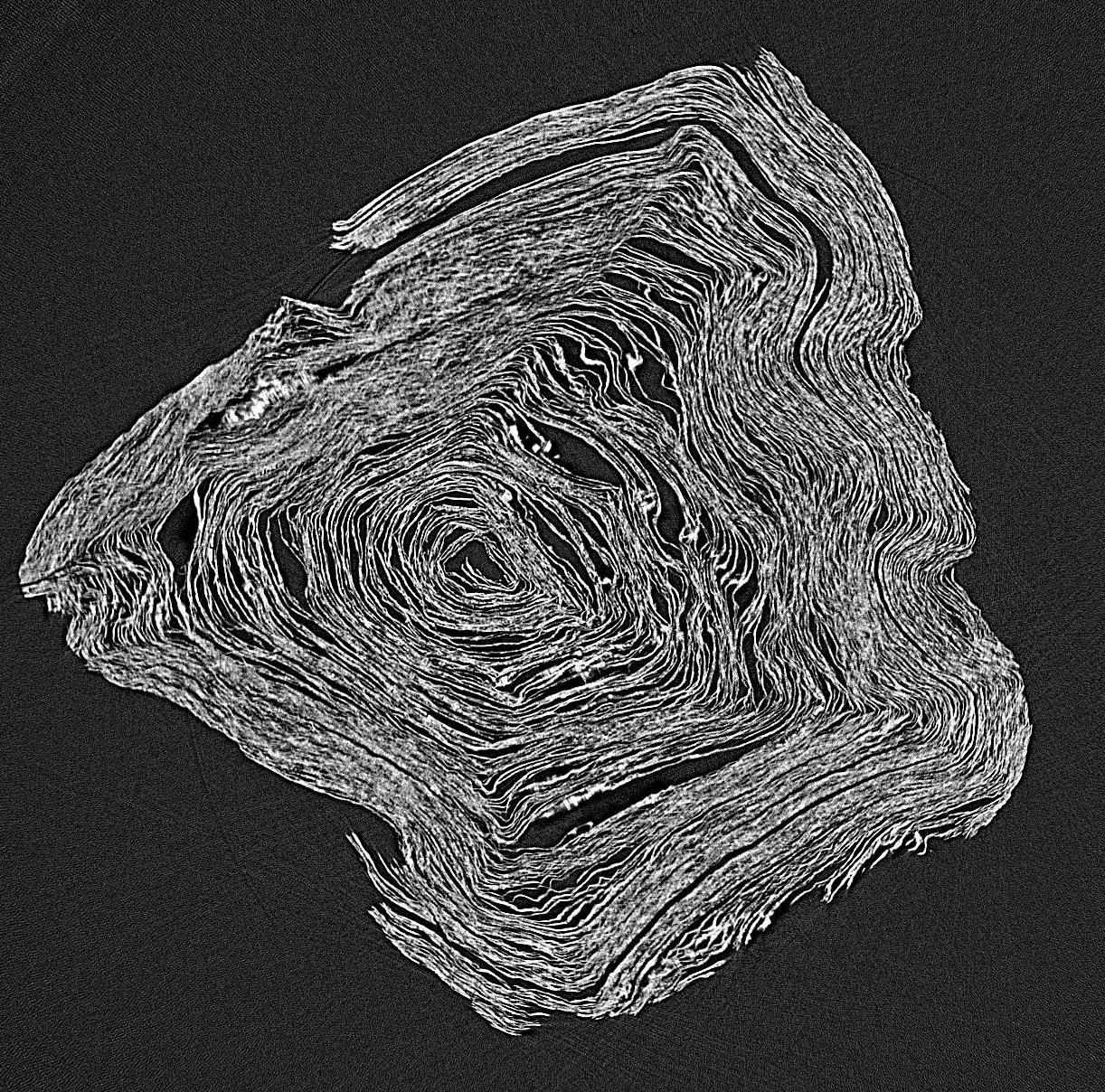 In addition, XPCT exploits the fact that the ink does not penetrate into the papyrus fibers and stands in very slight relief (a few hundred microns) to amplify this contrast and highlight the letters. The researchers could therefore read words and characters buried under several layers of paper.

After years of research on the Herculaneum scrolls, papyrologist Daniel Delattre, CNRS senior researcher emeritus at the IRHT and co-author of the study,4  was confident that “the fast pace of technological progress would lead to satisfactory results sooner or later.” So satisfactory, in fact, that the researchers were able to date one of the two papyri—from a collection of six presented as a gift to Napoleon in 1802 and kept at the Institut de France—to around 50 BC. The team also identified Epicurean philosopher Philodemus as its likely author. “This was an emotional 2000-year leap back in time,” all the more so as there exist no copies of these texts, the scientist points out.

Looking to the future

This discovery could eventually lead to deciphering the Herculaneum scrolls that remain intact, the others having been damaged by repeated attempts to unroll them over the past three centuries—often with disastrous results. Yet this is still some way away. “We must improve the legibility of letters, which is far from optimal at this stage, as well as try and automate the analysis and processing of thousands of images reconstructed from scans,” the papyrologist says.

Many scrolls have been damaged by repeated attempts to unroll them—often with disastrous results.

In addition, the internal spiral structure of the scrolls—deformed, entangled, and sometimes stuck together by the pressure of the pyroclastic flow5—makes the researchers’ undertaking even more challenging. Enhanced Digital Unwrapping for Conservation and Exploration (EDUCE), a software developed in 2006 at the University of Kentucky (Lexington, US) to flatten and unroll papyri digitally, is being improved in the hope that it can be used successfully on the Herculaneum scrolls.

Meanwhile, the “Villa of the Papyri,” antiquity’s only surviving library, may keep its secrets a little longer. Yet “it is early days,” notes Delattre, who trusts the charred manuscripts will eventually provide a better insight into ancient Greek literature and philosophy. Frozen in time for the past 2000 years, their message, it seems, is about to reach us.

Opinion
The thousand and one facets of glass
Archaeology