Mangroves: An Asset to Treasure

Mangroves: An Asset to Treasure

Rhizophora mucronata (pictured here in Mayotte) is a particular type of mangrove that has very characteristic stilt roots (that shoot from the trunk).
F. FROMARD/ECOLAB
Share
Share
Research teams are studying mangroves across the globe to explore the crucial role these ecosystems play for the well-being of local populations and the planet.

On December 9, 2014, a tanker carrying 350,000 liters of bunker oil collided with acargo vessel in the Sundarbans region of Bangladesh, threatening part of the world’s largest tidal mangrove forest, a UNESCO World Heritage Site. Mangroves are forest ecosystems that cover nearly three quarters of the world’s tropical coastlines, where their ability to adapt helps them flourish in intertidal zones with large variations in water flow, sediment flux, and saline content. They offer invaluable ecosystem services by limiting coastal erosion, acting as a buffer zone against cyclones and tsunamis, and by trapping and storing carbon. They are rich in young shrimp and fish that eventually migrate to nearby coastal waters, thus providing an important source of food for local populations. Despite their importance, they have shrunk by 30% over the last two to three decades, and continue to decline at an alarming rate of one to two percent each year, primarily due to shrimp farming in many parts of the world.

Surprisingly, there have been few detailed studies of mangrove forests, and growing international interest in recent years has not succeeded in slowing the retreat of these ecosystems. CNRS and IRD1 teams have acted to fill this informational gap by investigating mangroves from various scientific perspectives. They have also helped launch the CNRS/IRD’s 2015 Year of the Mangrove initiative, to raise public awareness of their importance, both in France and its tropical overseas territories, which boast some of the world’s best-preserved forests.

The French island of Mayotte, located in the Comoro Archipelago off the coast of Madagascar, is home to ex- tensive mangrove forests, which are, however, subject to considerable strain from increased urbanization and population density. To help balance the island’s demographic ex- pansion with the preservation of its natural habitat, researchers from the EcoLab2 worked with local authorities to set up a large-scale experiment aimed at testing the depolluting capacity of mangroves. 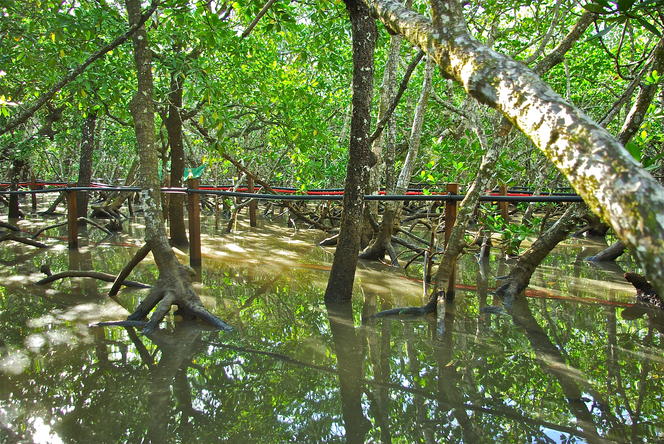 In Mayotte, the experimental plot of mangroves (Rhizophora mucronata) is criss-crossed by a network of pipes that release wastewater under controlled conditions. 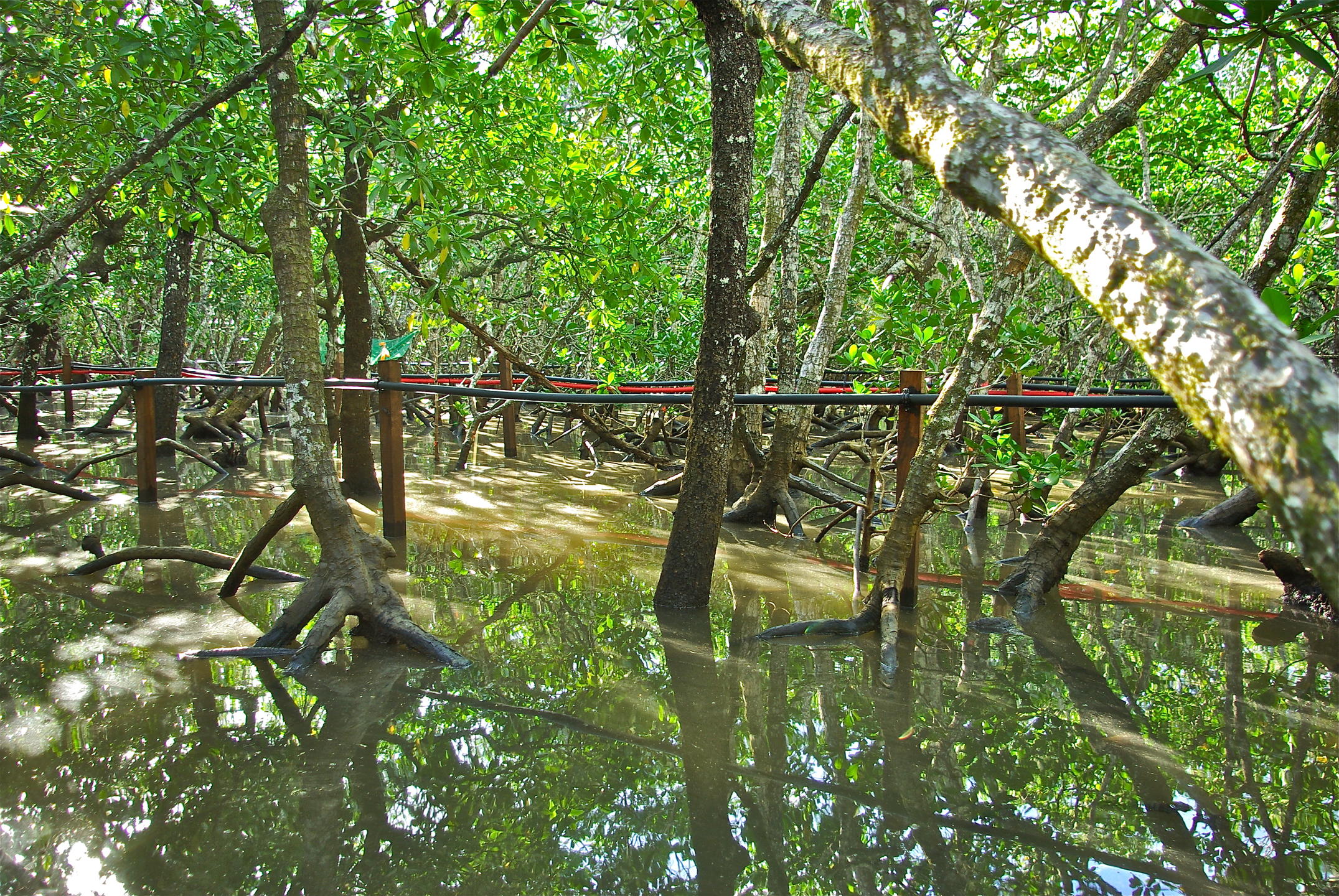 “We established a network of homes to collect domestic wastewa- ter,” explains EcoLab researcher and group leader François Fromard. “We then introduced this water into different plots of mangroves to track how they filtered out pollutants such as phosphorus and nitrogen, and the effect this has on the ecosystem in general.”

Scientists observed that the mangrove plots exposed to wastewater actually grew faster than other plots, as the forests were able to capture and integrate the pollutants into their biomass. Researchers are now conducting microbiological research to determine how pollutants such as nitrogen are absorbed, and what effect increased levels will have on the sediment, water, and fauna living within the ecosystem. 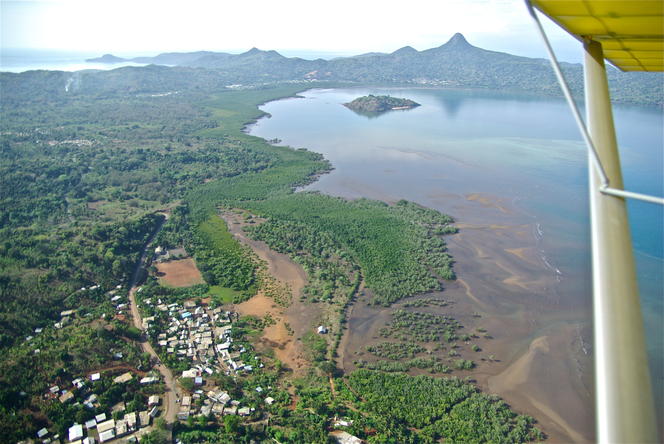 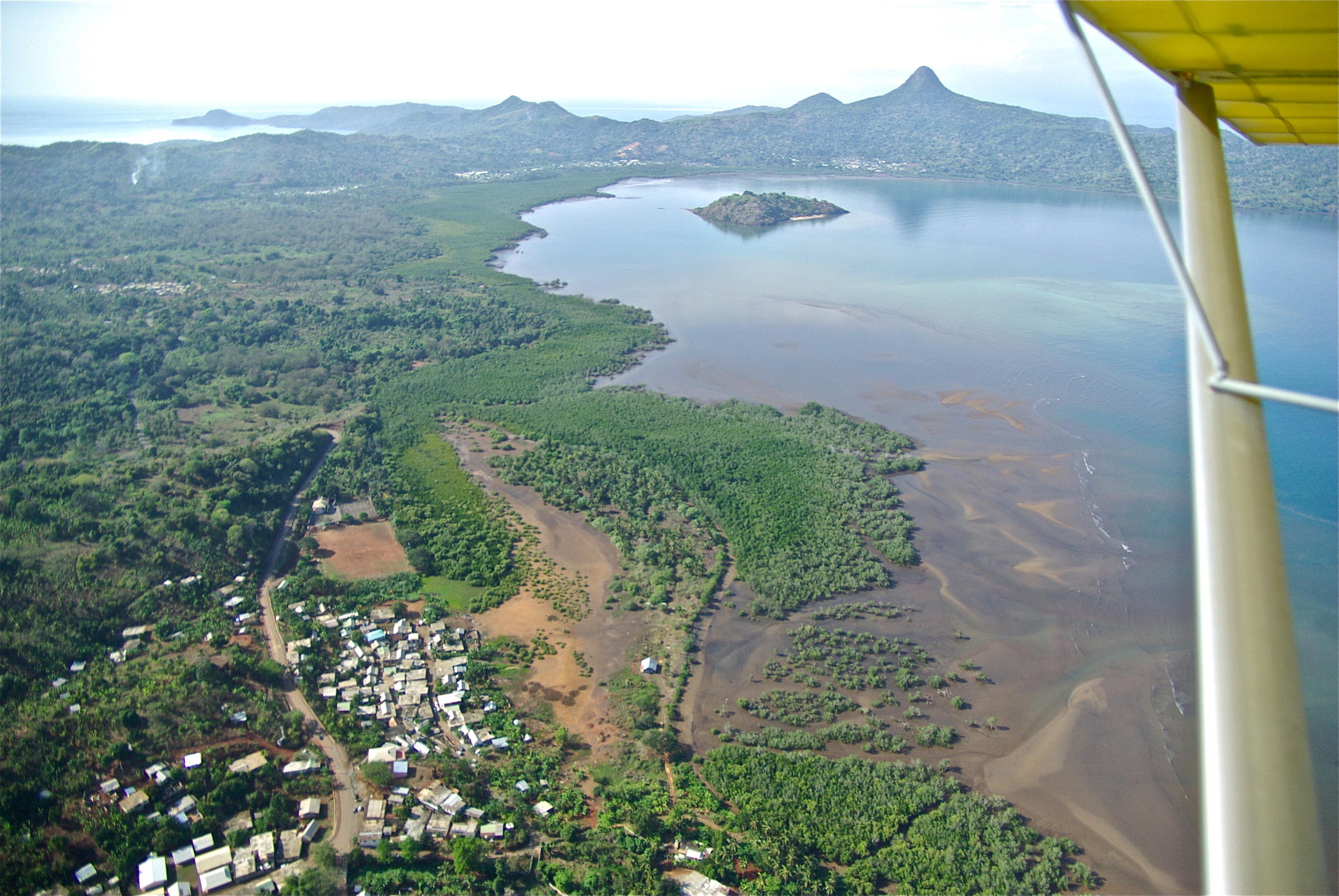 Fromard and his colleagues are also studying the mangroves of French Guiana, another overseas territory, but in South America. The mangroves here have experienced little human impact, but are subjected to a very active coastline that can advance or recede by two to three kilometers a year. This is due to the huge amounts of sediment deposited at the mouth of the Amazon River, which extend the coastline until erosion allows the sea to move inland. 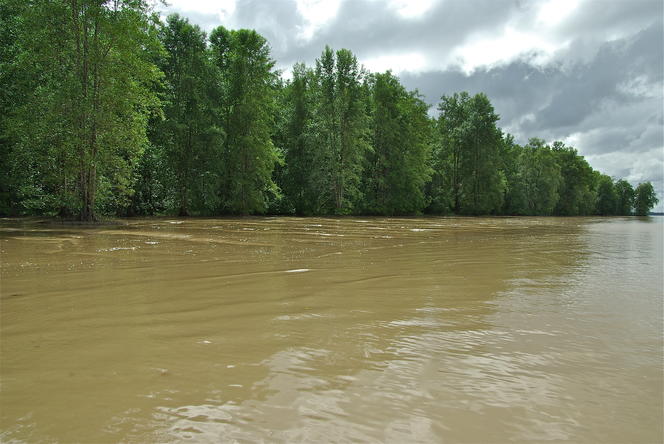 The Avicennia germinans that line the Oyapock river estuary (in French Guiana) are characteristic of mangrove vegetation . 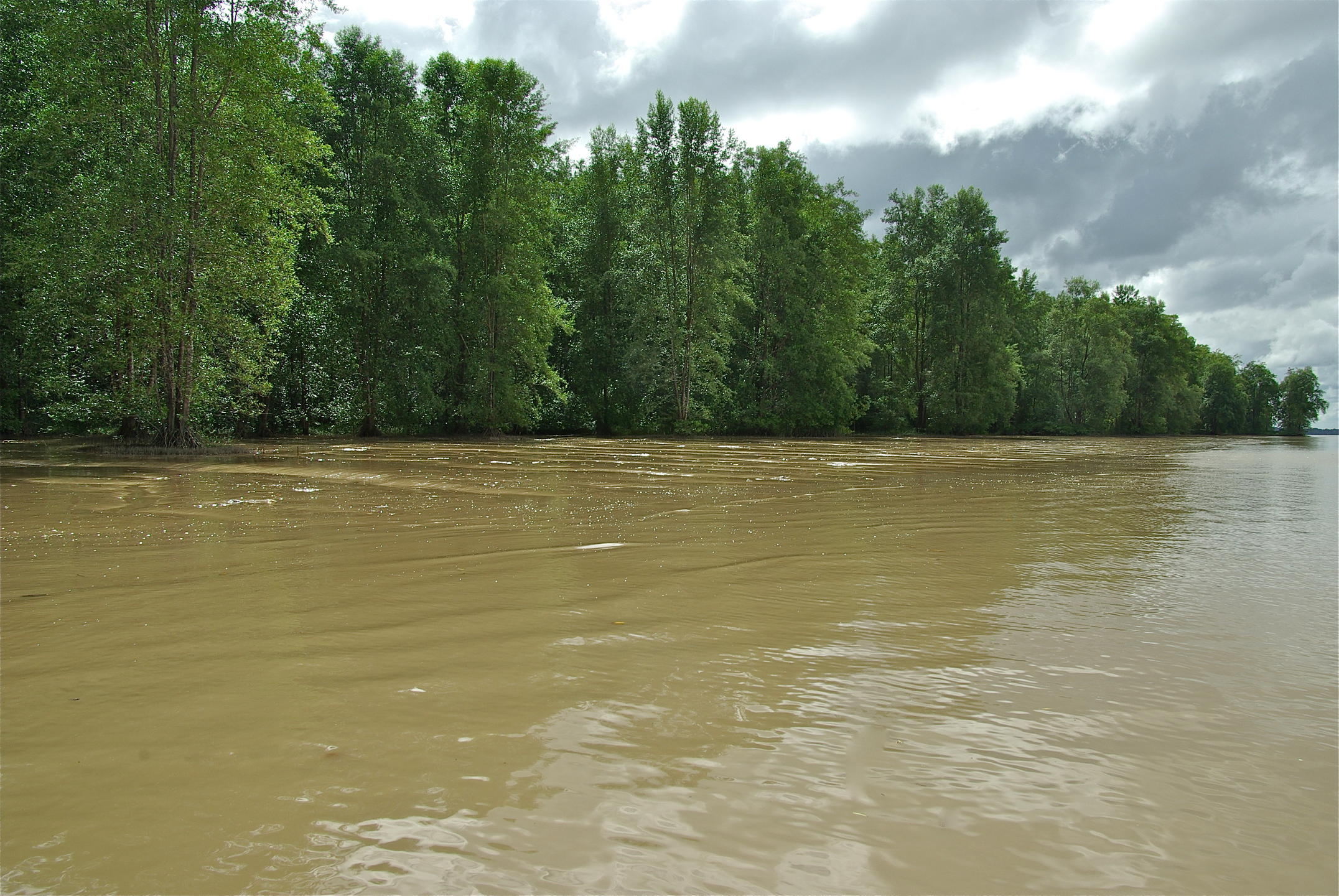 “This pattern of expansion and retraction works roughly in 30-year cycles,” notes Fromard. “We therefore created a database of coastal images, using aerial photography and satellite images going back to the 1950s, to determine how this cycle is being affected by climatic factors such as global warming, and how much carbon is released during periods of retraction.”

The vitality of local mangroves also applies to the rich biodiversity that thrives in the ecosystem. Emma Michaud and her colleagues from the LEMAR,3 a partner lab in the ANR4 Biomango project5 which aims to study and preserve the mangroves of French Guiana, and observe the fauna that lives in sediments of mangrove forests, such as small shellfish, worms, and crabs.

“Crabs are abundant, around 100-500 per square meter, and play an important role through their bioturbation activities, boring into the mud on the floor of the mangrove forests,” points out Michaud. “Water passes through the holes they create, oxygenating the environment, which in turn allows other organisms to grow—and local biodiversity to expand.” 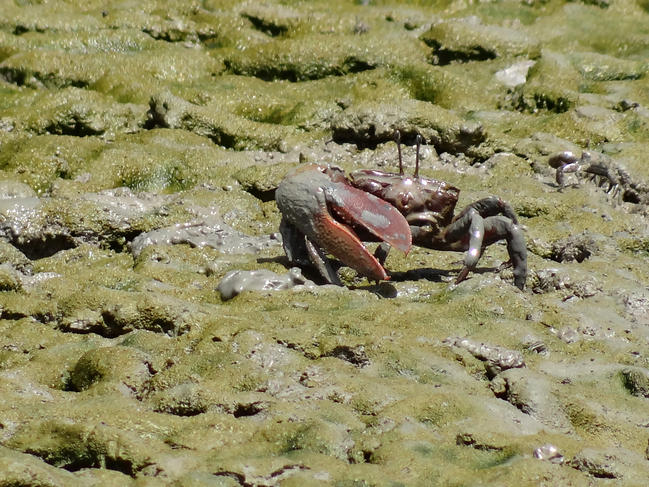 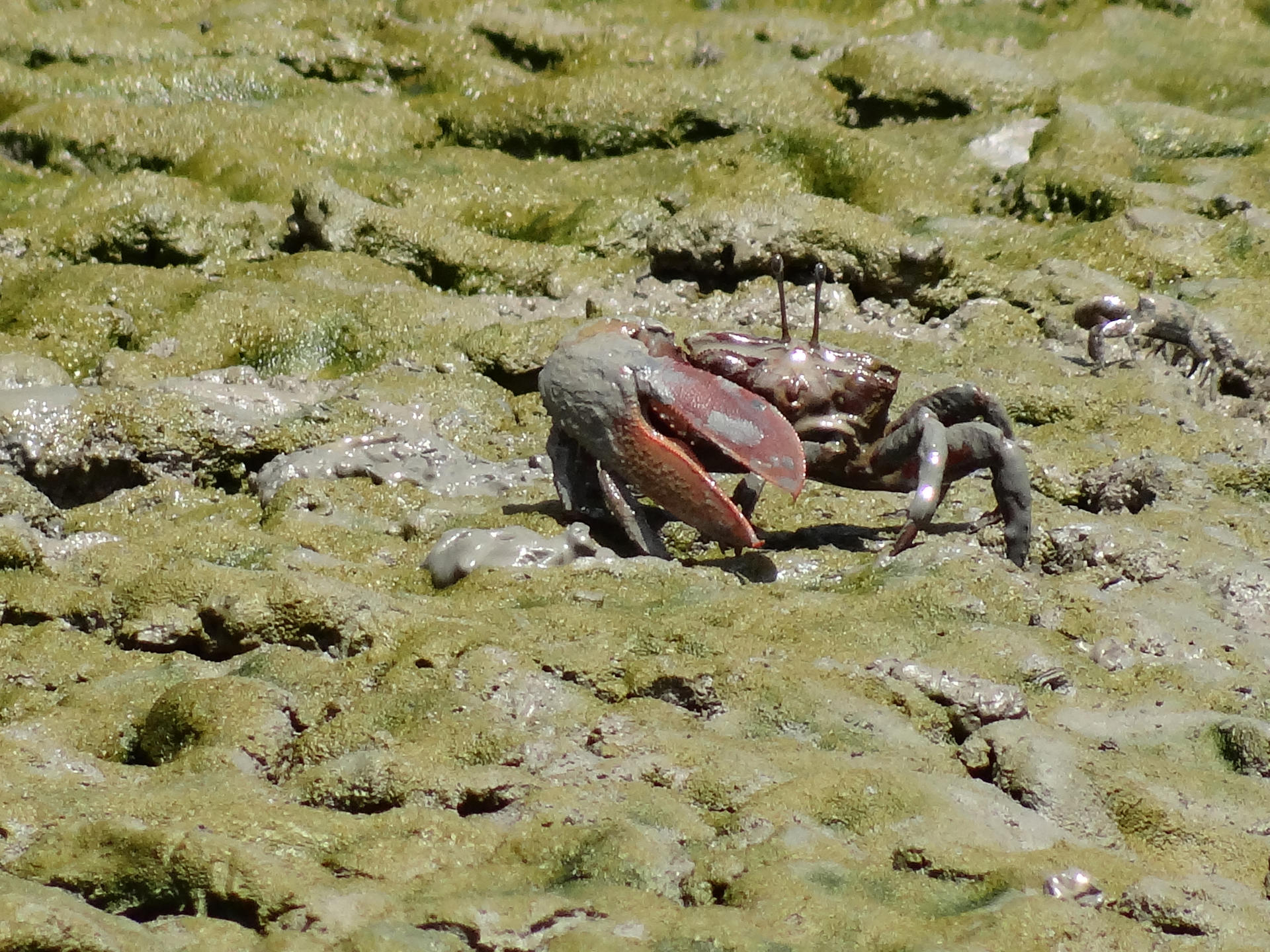 The increased oxygen also gives rise to certain types of bacteria that can rapidly decompose organic elements such as fallen leaves. “We do not yet know what overall impact these bacteria have on the ecosystem’s dynamics, including carbon sequestration or mineralization,” concludes Michaud. “However, projects are underway to shed more light on this area, as well as to list the ecosystem’s various species, about which there is little information.”

IRD and CNRS researchers based in New Caledonia have been studying local mangroves to improve under- standing of their carbon sequestration capacity, and how this capacity is evolving in the face of climate change. “New Caledonia is an ideal location to study,” notes team leader Cyril Marchand,6 “because its mangroves are well-preserved—some enjoying UNESCO World Heritage status— while being subject to significant human pressure such as deforestation, aquaculture, and mining.”

Marchand and his colleagues set up measurement equipment in man- grove forests, including ultrasound detectors mounted on tripods to gauge rising water levels and sediment flow, and an eddy covariance tower to record gas concentrations and 3D wind patterns. The measurements allowed them to calculate CO2 flux from the ecosystem to the atmosphere, and isolate the factors contributing to carbon sequestration, such as sediment water content, and temperature.

The resulting data sets also helped researchers identify a new factor, that of sediment surface biofilm. Consisting of plant-like microorganisms, it reduces the flow of CO2 from sediment to the atmosphere, thereby increasing the mangrove’s carbon sink effect. Further studies of the impact of the biofilm could help establish more accurate carbon budgets.

Slideshow
Are Fragmented Forests a Threat to Birdlife?