Jean Dalibard standing before the optical table in one of the Kastler Brossel Laboratory’s experiment rooms, 16 June 2021.
Frédérique PLAS/LKB/CNRS Photothèque
Share
Share
A brilliant physicist and a leading specialist in cold atoms, an area that is central to light-matter interaction, Jean Dalibard has been awarded the CNRS 2021 Gold Medal, one of France’s highest scientific distinctions.

“This building was home to the first French cyclotron, a particle accelerator built at the Laboratory of Nuclear Chemistry headed by Frédéric Joliot-Curie.” In his office at the Collège de France, located in the heart of Paris’s Latin Quarter, Dalibard enjoys relating the achievements of his illustrious predecessors. But on this fine spring day, it is his story that we have come to hear. A physicist at the Kastler Brossel Laboratory, member of the French Academy of Sciences, former professor at École Polytechnique, and holder of the Collège de France Chair in Atoms and Radiation since 2013, this explorer of the quantum world has now received the 2021 CNRS Gold Medal. He welcomes the distinction with humility. “It is an individual award resulting from the judgment of individuals with whom I share the same method and values, namely the scientific method, along with the doubt and confidence that underlie it.” A passionate researcher and instructor, Dalibard has contributed to the emergence and influence of the new discipline of cold atoms. During his career, 30 years of which were spent at the CNRS, he has distinguished himself through his approach combining theory and experiments. His pioneering research has enabled considerable advances in atomic physics, where light can act on matter. Among other achivements, he was behind the development of quantum technology, such as the magneto-optical trap for cold atoms. We also owe him the very first experiments on quantum whirlpools in cold atom gases, which defy all intuition.

As far back as he can remember, Dalibard has always wanted to do science. He was born in 1958, in a family environment where machines played a prominent role. His childhood was especially marked by two things, the windmill of his miller grandfather, whose every gear he can still remember vividly, and 20 July, 1969, the day humans set foot on the Moon. “I wanted to be in NASA’s control room. I did not so much dream of walking on the Moon as building the machines that sent humans there.” Then life and its lot of (illustrious) encounters led him towards somewhat more basic research. These firstly included his high school teachers, and how they taught the world, which gave him his taste for physics. 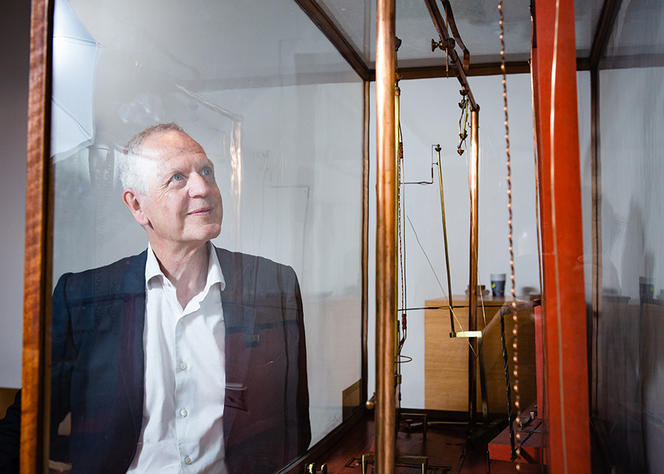 The medallist at the Collège de France, in front of an amperage table. 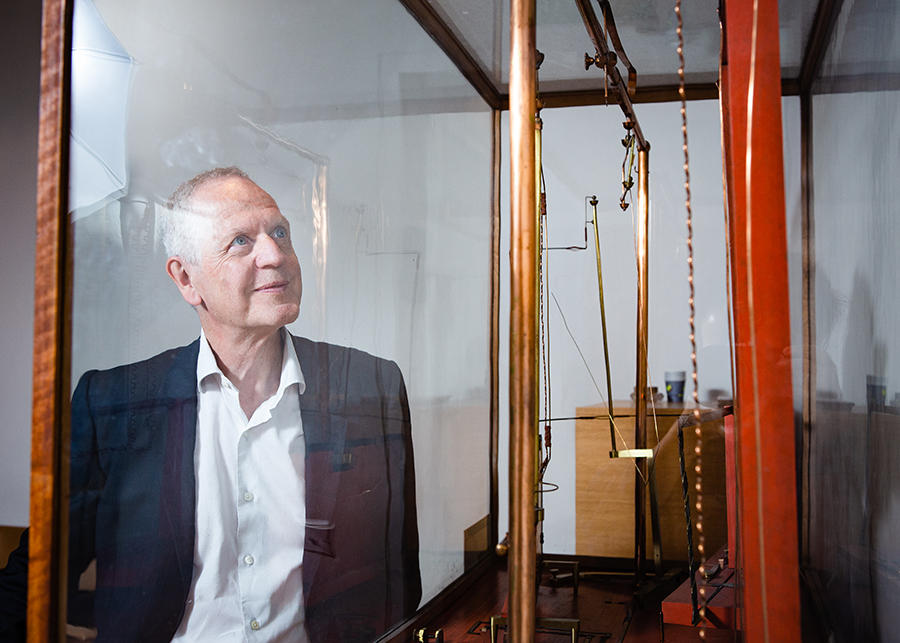 Then came a “traditional” path: École Normale Supérieure and Université Paris-VI, where he studied up through the agrégation in physics, which he received in 1981. At the time, he still was not sure he wanted to embark on an academic career, but “everything unfolded naturally”, he remembers. “My thesis, supervised by Claude Cohen-Tannoudji, my joining the CNRS in 1982, where few were selected and few applied, my first steps at the Institut d’Optique with Alain Aspect (winner of the 2005 CNRS Gold Medal), a position as a lecturer at École Polytechnique from 1989 to 2002, and then as a professor beginning in 2003. One could say that I was fortunate enough to often be in the right place at the right time,” Dalibard says in jest.

The cold that comes from light

Dalibard was fortunate enough to witness – and contribute to – the blossoming of the brand new research field of cold atoms, which is to say the ability to precisely manipulate and control the movement of gas atoms using light from lasers. In counterintuitive fashion, light is an invaluable ally here, as it can generate cold up to one billionth of a degree above absolute zero, or -273,15 °C. It does so by rendering atoms virtually immobile within an “optical molasses”. When hot, atoms become agitated, releasing a great deal of energy. However, with the help of lasers, when a photon collides with an atom, the latter recoils, just as a a cannon moves backwards when fired. The atom’s speed is slightly modified, by a few centimetres per second. By repeating the operation 30 million times per second using a laser, the atoms are cooled, allowing exotic states of matter to appear. “We thus produce a quantum material with properties that are radically different from the fluids or solids we encounter everyday.” Studying these exotic properties, measuring time with great precision (by building atomic clocks), and validating fundamental theories of physics that were previously no more than thought experiments are only some of the possible applications of the cooling of atoms. However, at the time this field of research was in its infancy, and interested few researchers. The very first observation of a trapped and cooled ion, along with a conference by Claude Cohen-Tannoudji in 1979 (“Manipulating Atoms”), convinced him to commit to this new discipline. “It was a fine scientific adventure to be pursued, it was believed at the time, for a few years. I remember a congress in 1985. We thought it would be the last. In retrospect, we realised that we were familiar with only a tiny portion of this new field of research.”

Yet the notion that light can order matter was not new. In 1916, Albert Einstein established the theoretical basis for interaction of radiation and matter. In France, Alfred Kastler (Nobel Prize in Physics in 1966) contributed his light-cooling effect in 1950. But it was mostly the advent of tunable lasers in the 1970s that opened up new possibilities, such as the emergence of truly spectacular effects in the manipulation of atoms by light. Dalibard would also try his hand at domesticating atoms. In 1986, during a conference in Helsinki (Finland), he laid out the principles for the magneto-optical trap, an apparatus that has become standard in laboratories worldwide for trapping atoms by cooling them with a pair of laser beams. 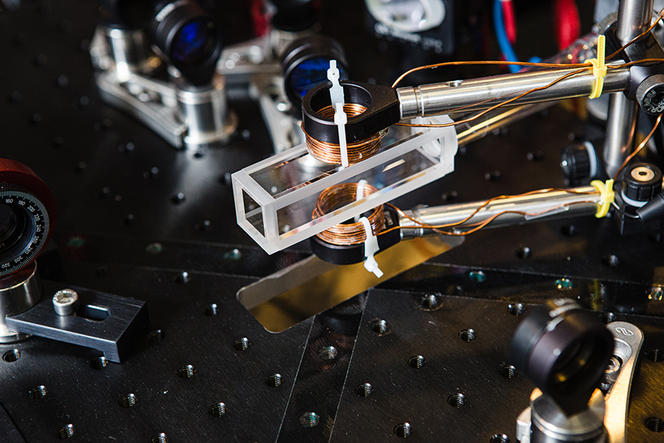 This optical table, equipped with a magneto-optical trap consisting of an ultra-high vacuum cell, can trap atoms in the cell’s centre along the axis of the spools. This experiment was conducted by Jean Dalibard’s team in one of the LKB’s experiment rooms. 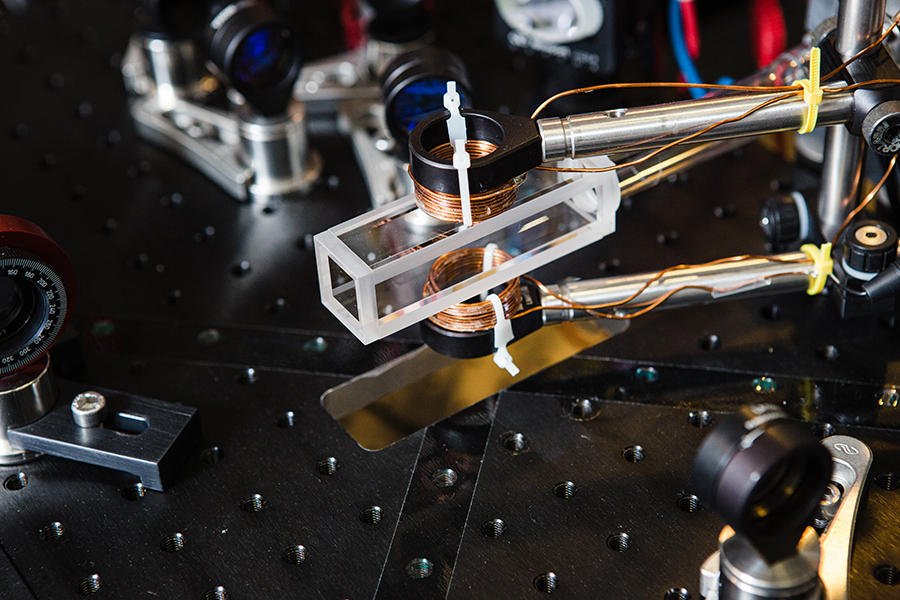 Since then, Dalibard has never ceased to play with light and matter, which he believes are “essential to the physical world”. He was fortunate enough to combine experimentation and theory, thereby “assembling the pieces of a puzzle”. He set out to complete this task at the Kastler Brossel Laboratory, where he trapped a few atoms in light cages using lasers, and cooled them using the “Sisyphus effect.” Atoms found themselves in the unfortunate role of the Greek hero condemned to endlessly push his boulder up the mountain, having to continually climb hills – of potential. Their energy quickly waned, until it was too low to reach the following peak. “Our particles end their journey practically motionless, at the bottom of wells created by standing light waves,” the physicist explains. Going (ever) further, in the 1990s he and his colleagues developed a new approach, the theoretical Monte Carlo wave-function method also known as “quantum trajectories,” which has been used by many researchers to simulate the behaviour of systems of atoms and photons in various experimental situations.

The laser cooling of atoms nevertheless has its limits. Until then, physicists were essentially interested in the individual behaviour of cold atoms. The transition to the collective – quantum – behaviour of cold gases was enabled in the mid-1990s by the new technology of evaporative coolers. “This is about eliminating the particles with the most energy, keeping only the slowest ones. The combination of these two coolings made it possible in 1995 to achieve a new state of matter also predicted by Einstein in 1925, the Bose-Einstein condensate.” In these confined environments, millions of atoms placed in the same energy state and rendered undistinguishable from one another begin to march like little soldiers, behaving like the photons in lasers. Some gases become superfluids, acquiring the amazing ability to flow without any viscosity.

Fascinated by gas condensates at the Kastler Brossel Laboratory (LKB) in the early 2000s, Dalibard and his team began a study of this quantum matter by observing quantum whirlpools in cold atom gases. When the gases are cooled very quickly, holes, or more precisely vortices, form. The scientist is still studying these quantum vortices, their shapes, and their dynamics today. Beautiful physics, in his opinion. One of his greatest joys was to be among the first to observe these brand new phenomena. 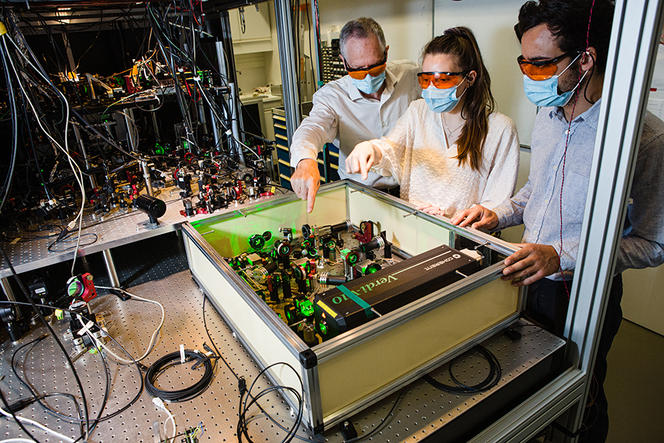 With Chloé Maury and Brice Bakkali-Hassani, around an optical bench in an LKB experiment room, discussing the experiment in progress (Bose-Einstein condensate). 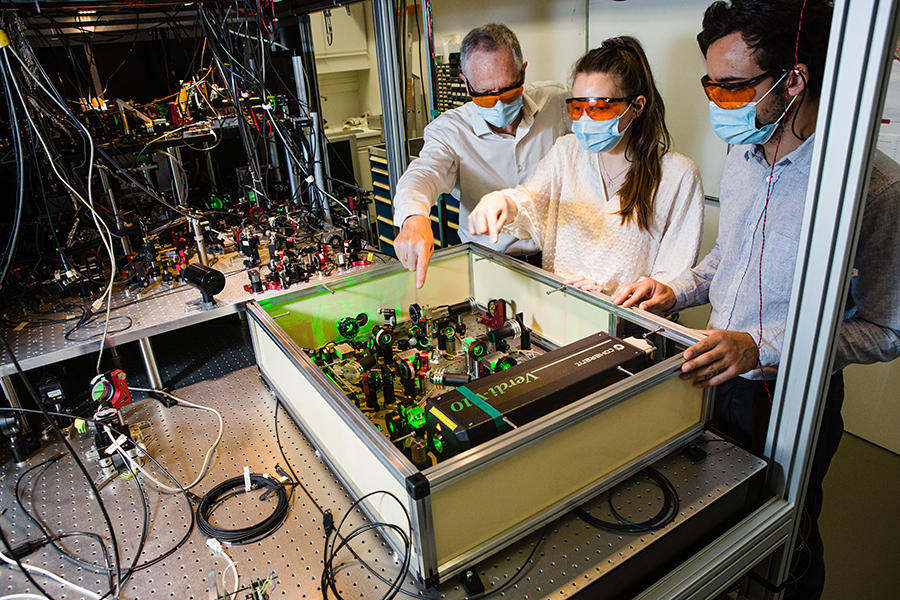 Recently, he has taken an interest in the quantum simulation of problems beyond today’s computing capacity, namely by using ultracold quantum gases. Due to their characteristic dimensions, physicists are notably trying to use these Bose-Einstein condensates as quantum simulators that can help them solve highly complex problems. These offer a platform for creating and studying quantum systems in perfectly controlled conditions, by simulating situations that overlap condensed matter physics, nuclear physics, and astrophysics. Not simple, but elementary.

Our discussion ended in one of the physicist’s laboratories at the Collège de France, where his students are meticulously installing an entirely new experiment like it was just another construction set. A sign that here too activity has resumed after a difficult year for research.

The Covid-19 pandemic was also an opportunity for Dalibard to fully devote himself to his research. “We experienced it as a change in temporality: we were no longer the masters of the clock. While nobody wants this situation to happen again, or to drag on forever, the impact on research was not entirely negative. The development of online conferences, for example, enabled us to create a data bank of scientific knowledge, accessible to all and entirely unprecedented.” This eminent researcher, who for over 30 years has taught and communicated his passion for physics to the general public, deplores the low percentage of women in his discipline, a phenomenon that he does not understand. “Why this shortage? We are depriving ourselves of so many minds in our laboratories. Don’t listen to those who say that mathematics, physics, and basic sciences are not for young girls.” The physicist calls for establishing new female models with whom women can identify, alongside the iconic Marie Curie. A final point that is very close to his heart is scientific teaching at school, “the poor relation of education”, he regrets. “Why aren’t people more concerned?” For in  his opinion, “reasoning” should be added to the trio of reading, writing, and counting.