First Ten Years of the LHC: the Adventure Continues

First Ten Years of the LHC: the Adventure Continues

Detector of the CMS experiment in the open configuration, enabling access to the interior of the detector during prolonged shutdown of the LHC accelerator.
Patrick DUMAS / LHC / CNRS Photothèque
Share
Share
After ten years in operation, the CERN particle accelerator located on the border between France and Switzerland has reshaped the physics of elementary particles. It will restart in 2021 with even better-performing facilities.

The LHC (Large Hadron Collider) has now been running at full capacity for a decade, together with the four experiments that detect the particles produced by collisions between protons, one of the components of atomic nuclei. At a rate of around 30 million times a second, the huge accelerator collides protons at speeds close to that of light, in a tunnel measuring 27 kilometres in circumference. 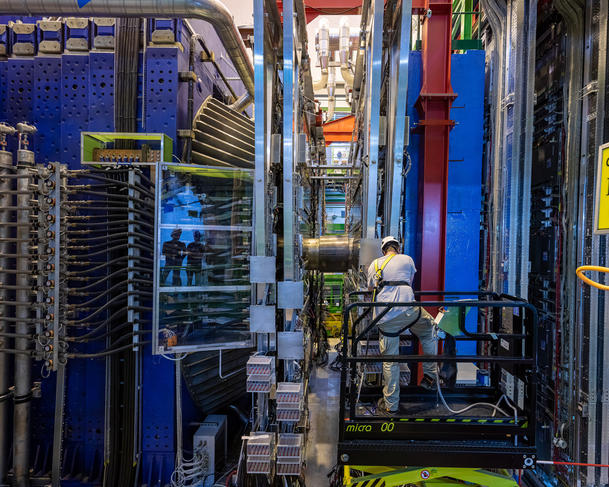 Dipole magnet (on the left in blue) and different detection planes of the muon spectrometer of the ALICE (A Large Ion Collider Experiment) experiment. 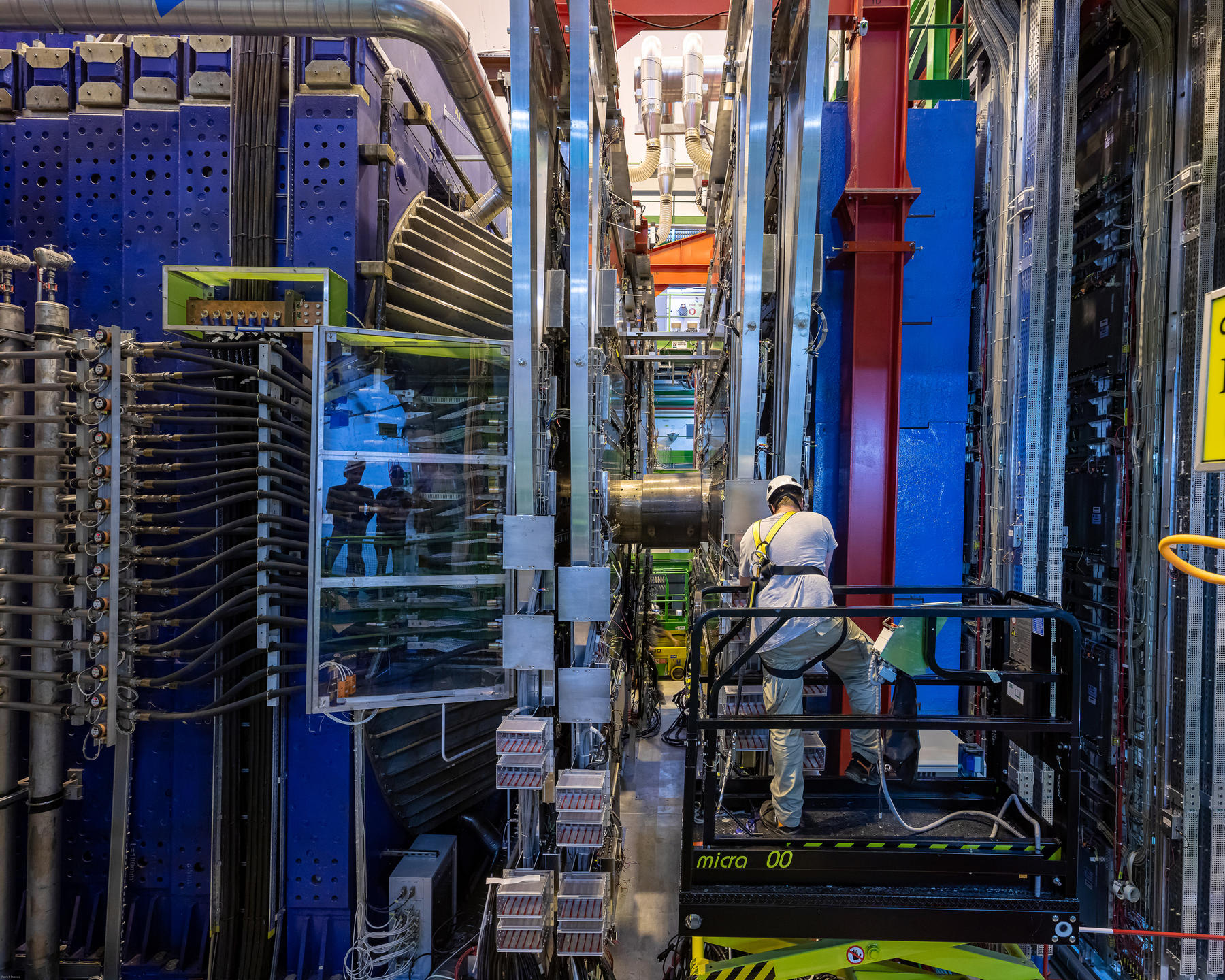 The thousands of researchers, engineers and technicians taking part in this unprecedented scientific venture at CERN near Geneva (Switzerland) seek to shed more light on the physics of elementary particles and hence on the fundamental laws of the Universe. Ever since the launch of the most extraordinary particle physics experimental facility ever designed, there has been a wealth of surprises and discoveries, including a Nobel prize along the way. And this is only just the beginning. With the installations currently being upgraded to boost their performance, the project is scheduled to last until at least 2037.

The LHC is based on a simple principle: every time the accelerated protons collide, their accumulated kinetic energy is transformed into “grains” of matter, as a result of the equivalence between matter and energy. These newly-formed particles provide clues about the elementary processes that gave rise to them.
Around twenty years ago, the proponents of the LHC calculated that, in order to detect significant phenomena, the protons needed to reach an energy of 7 teraelectronvolts (TeV), roughly that of a mosquito in flight but squeezed into a volume a trillion times smaller. This is why such a huge accelerator was needed, as well as four exceptional detectors, ATLAS, CMS, LHCb and ALICE, to observe the tiny particles produced by the collisions. ATLAS, for example, is a 40-metre long cylinder that has a diameter of 22 metres and a weight of 7,000 tonnes, while CMS, with a 15-metre diameter and a length of 21.5 metres, weighs in at a staggering 12,500 tonnes. 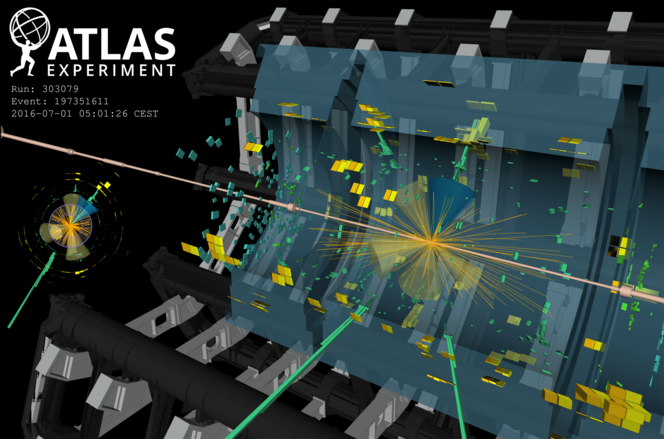 Higgs boson produced together with two top quarks in ATLAS. 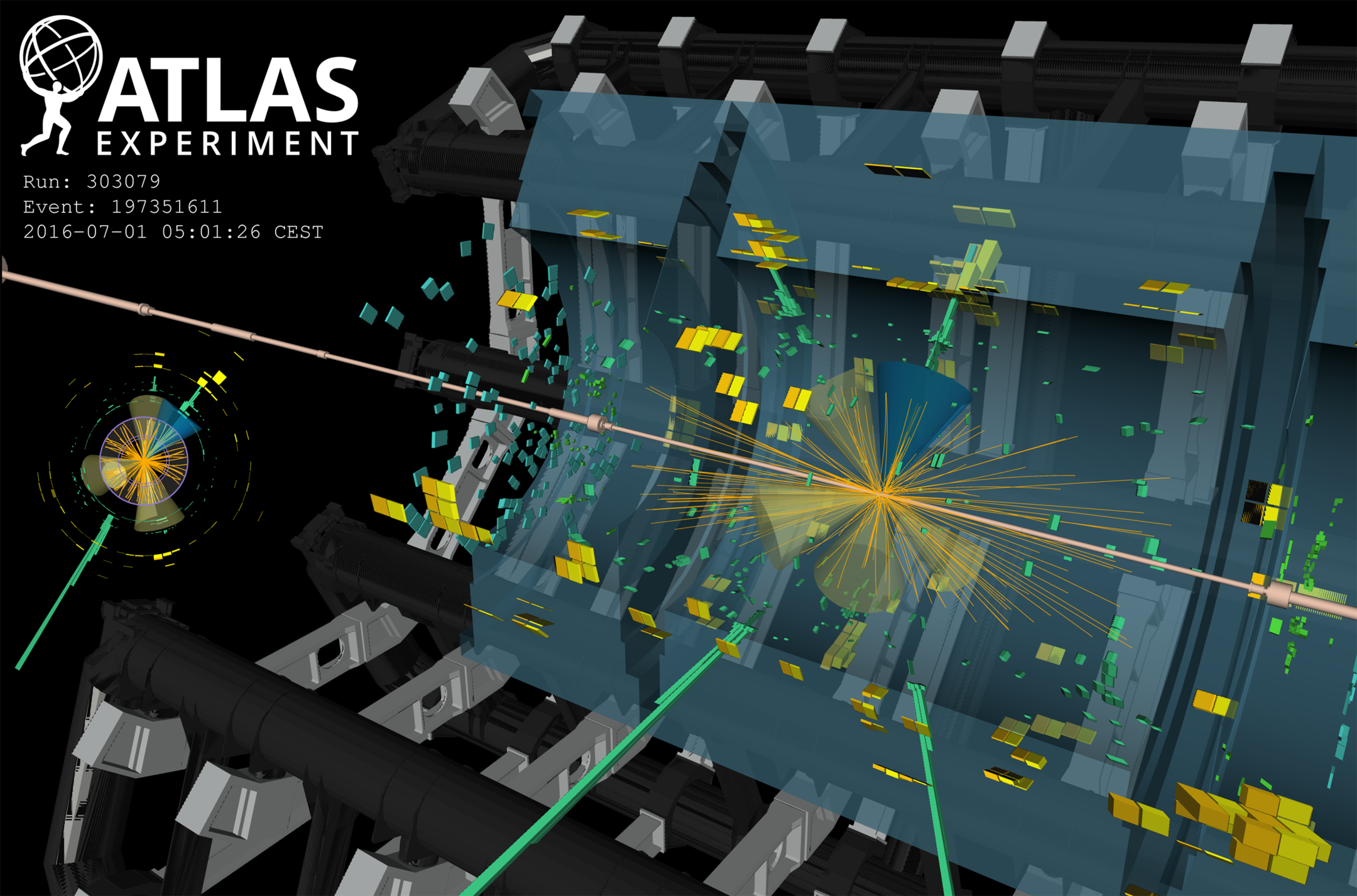 French scientists have played a significant role in each of these international collaborations. As Laurent Vacavant, deputy scientific director at the CNRS’s National Institute of Nuclear and Particle Physics (IN2P3), explains, “France provides 14% of the CERN budget and covers 10% of the cost of the detectors. Specifically, ten IN2P3 laboratories are involved in the four experiments, with 250 researchers, 280 engineers and technicians, and around a hundred PhD students working on a permanent basis, in addition to about 150 staff from the CEA's Institute for Research into the Fundamental Laws of the Universe.” Over the past ten years, French teams, alongside 600 institutes and universities from across the world, have been involved in designing and building the detectors and analysing the results, as well as in operating and maintaining the facilities.

The LHC brings together several experiments designed to find answers to a number of distinct or related problems. ATLAS and CMS are what are called discovery detectors. As Vacavant points out, “with their tens of millions of sensors, they can collect data in every possible area”, which enabled them to finally track down a particle that, ten years ago, was purely hypothetical: the Higgs boson. The existence of this particle, thought to give nearly all other molecules their mass, had been predicted since 1964, but never detected. 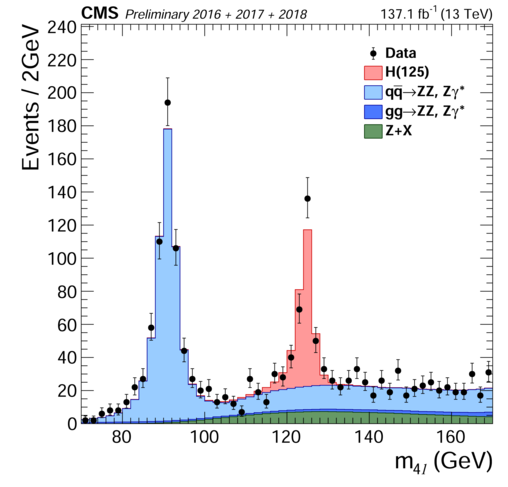 Detection in the CMS of the Higgs boson decaying into 4 leptons (one of the ways it was discovered in 2012). 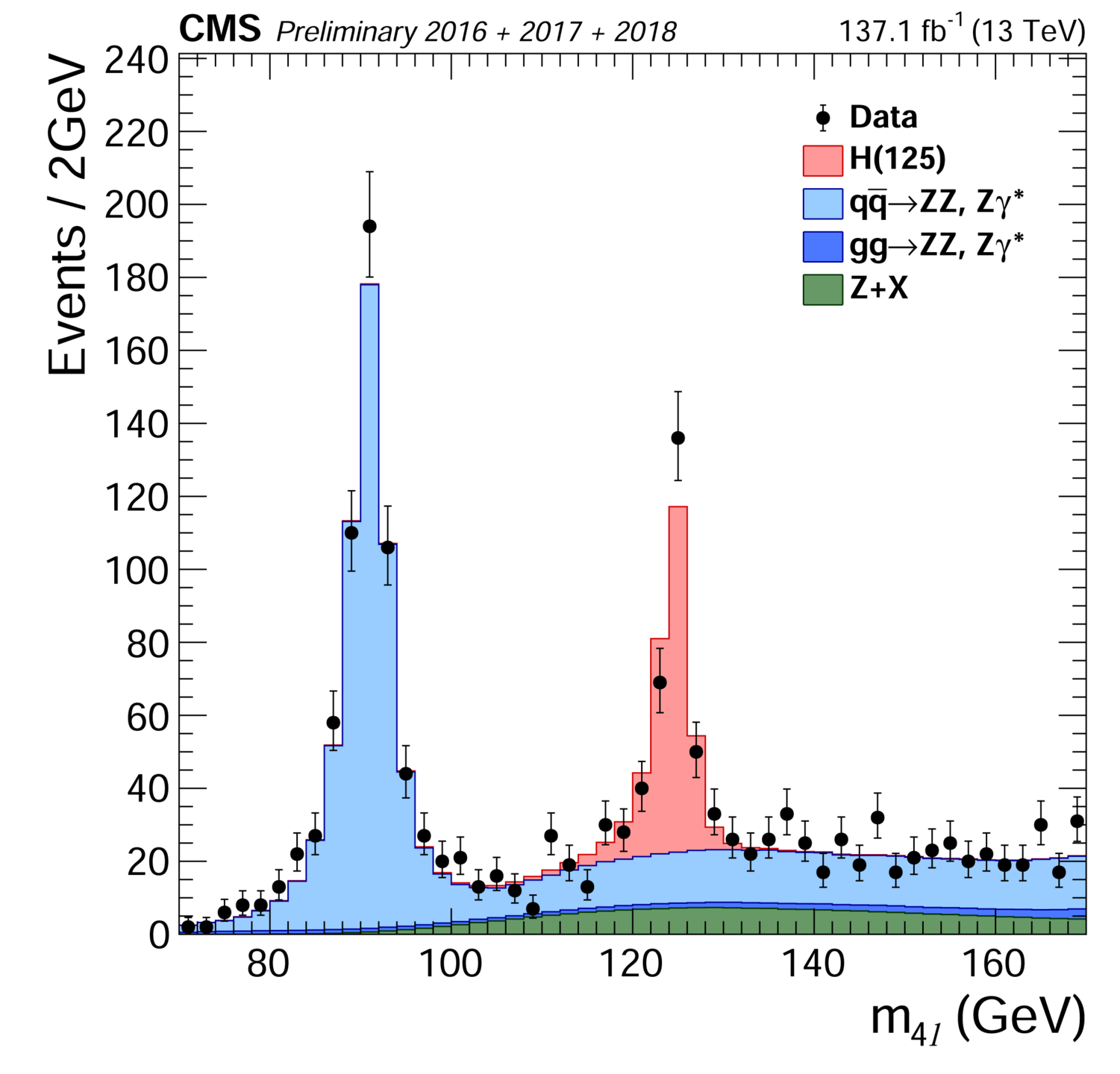 Detection in the CMS of the Higgs boson decaying into 4 leptons (one of the ways it was discovered in 2012).
CERN / CMS
CERN / CMS
Share
Share

Yet the power of the LHC enabled surprisingly fast progress to be made. As Isabelle Wingerter-Seez, in charge of Atlas-France until 2017, explains, “at the start, we thought it would take five or six years before we spotted anything. But as early as 2011 we began to notice a signal emerge from the noise, and in 2012 we were able to confirm that the Higgs boson was there!” Didier Contardo, who heads CMS-France, recalls: “we knew how best to detect it, the experiments and the analysis chain proved to be as successful as expected – if not more so – and both detectors observed the same thing at the same level of accuracy.” The discovery was announced on 4 July, 2012 in the CERN main auditorium. And the following year, François Englert and Peter Higgs, the scientists who had hypothesised the boson back in 1964, were awarded the Nobel prize (having died in 2011, Robert Brout could not receive the award).

The Higgs boson provided the missing piece of the Standard Model of physics (SMP), which describes all known elementary particles and their interactions (except for gravity). ATLAS and CMS, however, were also designed to discover unknown elementary particles and uncover new physics not described by the Model. To explain the nature of dark matter (article in French), the value of physical constants, or the absence of antimatter (article in French) in the Universe, it is necessary to go beyond the SMP – except that, much to everyone’s surprise, ten years of hard work failed to produce any evidence of new physics: “we didn’t spot even the tiniest hint of something that didn’t fit the Standard Model,” Wingerter-Seez explains. 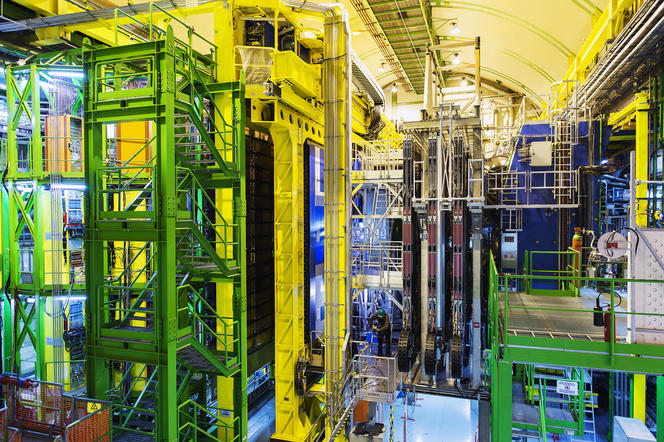 The LHCb was designed to study the slight asymmetries between matter and antimatter. 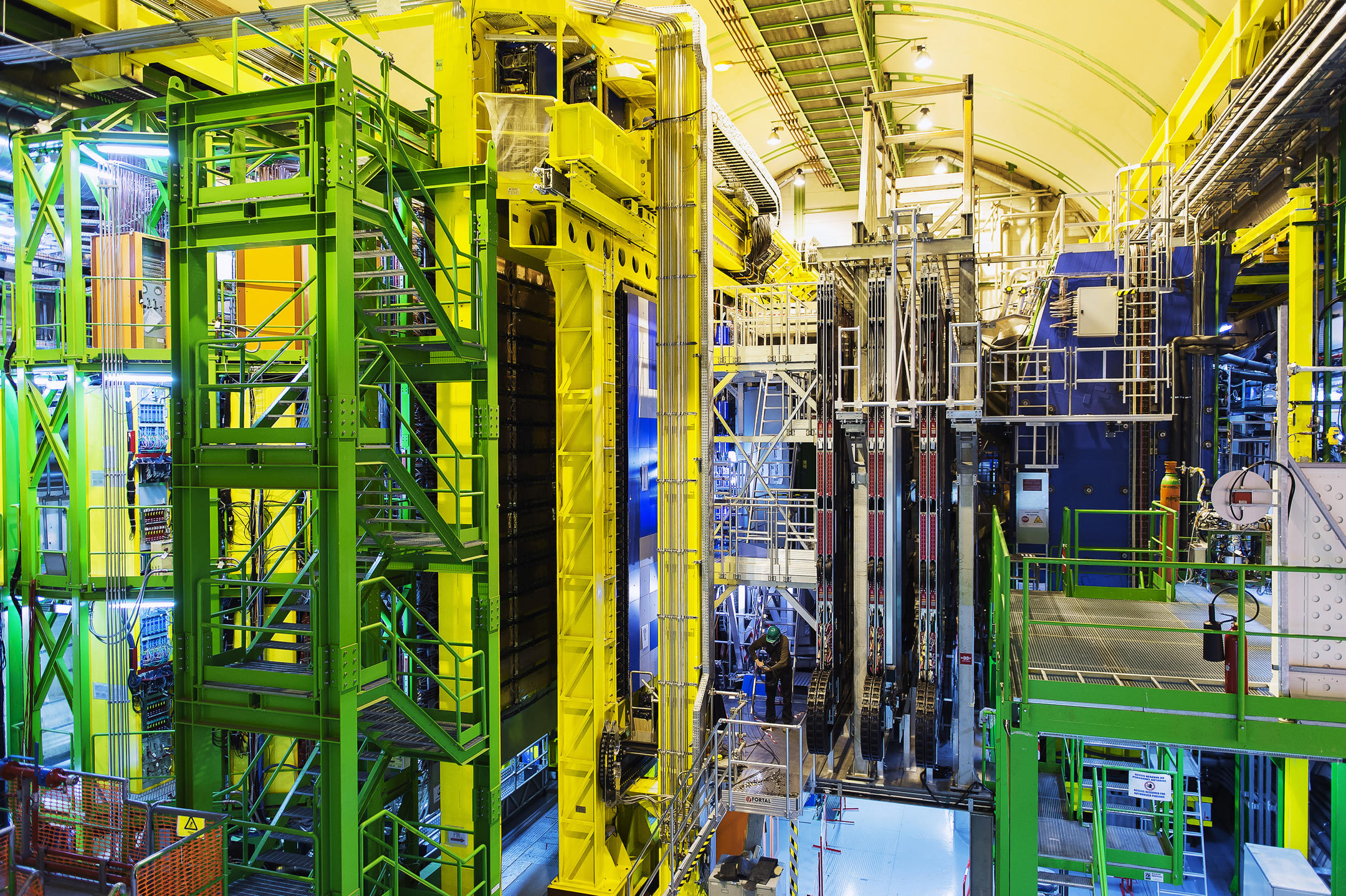 Could it be that new physics simply doesn’t exist? Or that it exists in ways that haven’t yet been thought up? Or are its signals more exotic than those sought by the detectors? Nobody knows as yet. Therefore, having followed the most obvious leads, the experimenters are now hunting painstakingly for new clues. “We’re searching in less accessible areas for unusual processes, complex observables, models of new physics that were in principle less popular, and so on,” Contardo confirms.

Consequently, after the initial euphoria of its discovery, researchers have now embarked on a meticulous study of the Higgs boson, in particular to determine how it interacts with each of the known particles of matter. For example, in 2018 they observed its coupling to the top quark (the most massive elementary particle known to date) and its interaction with the bottom quark. What the scientists are hoping for is that they may spot some small discrepancies from the predictions of the Standard Model.

However, the surprise might come from the LHCb experiment, which studies the decay of particles called B mesons. According to the SMP, matter and antimatter are almost identical in every way. And yet there is absolutely no antimatter in the Universe, which is one of the great mysteries of fundamental physics. This prompted specialists to compare the properties of B mesons and B anti-mesons, with the aim of detecting a possible difference that might provide a clue. 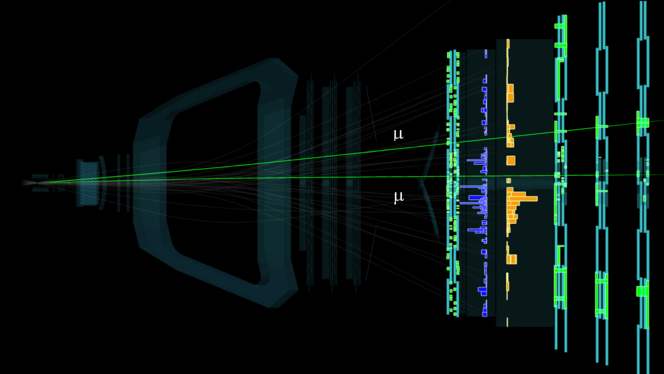 A B Meson decaying into two muons. 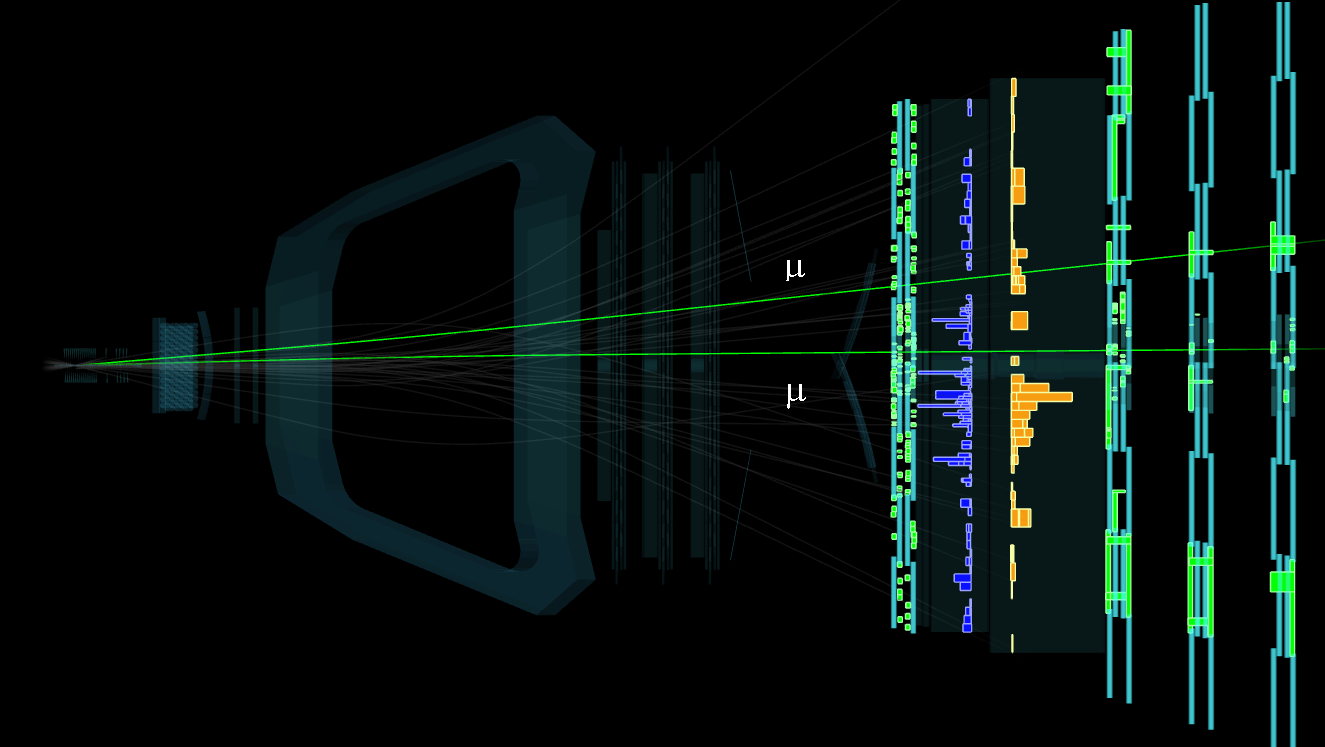 Although this isn’t the case for the time being, LHCb has nonetheless observed a number of odd phenomena in the past few years: for instance, some mesons can decay either into electrons or into their heavier cousins, muons. However, as Renaud Le Gac, who leads LHCb-France, explains, “the Standard Model states that the two processes should be perfectly identical, but according to our data this is not exactly true. Although at this stage the differences are not yet significant, they provide the most promising route to observing physics beyond the SMP.”

The CERN researchers have also made some other exciting discoveries within the framework of the Standard Model. For instance, whereas until now only particles made up of two or three quarks (such as protons and neutrons) were known, in 2017 the LHCb experiment produced a subatomic particle composed of five quarks, the pentaquark. This has helped improve the modelling of quarks and of the strong interaction, which binds together both quarks and the components of the atomic nucleus. 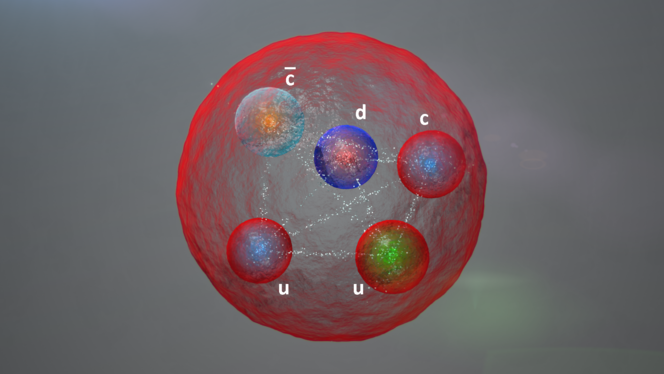 Representation of the hypothetical internal structure of a pentaquark. 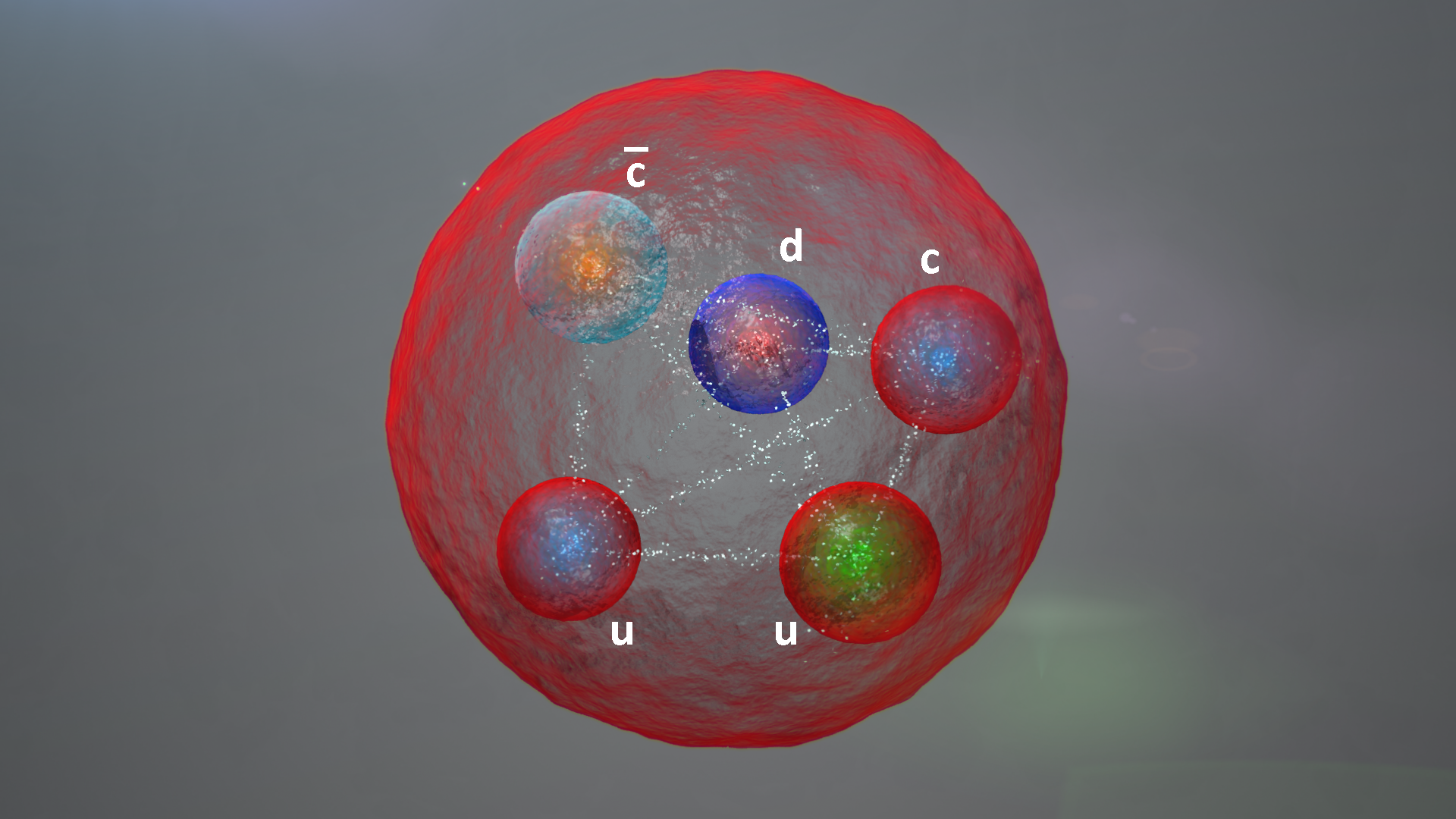 The strong force and its mediators, gluons, are also the focus of research carried out at the ALICE detector, which studies a highly remarkable state of matter called quark-gluon plasma or QGP. The latter is obtained by colliding the nuclei of lead atoms, producing an extremely hot and dense “soup” made up of quarks and gluons, which are normally confined within protons and neutrons. This is thought to be the state the Universe was in, a microsecond after the Big Bang.

As Cvetan Cheshkov, deputy physics coordinator of ALICE, explains, “the energy produced in the LHC enables us to obtain the hottest, densest and longest-lived QGP ever observed.” Aside from breaking new records, this makes it possible to study the QGP in greater detail and determine its specific characteristics using new experimental methods. For the first time last year, for example, the physicists at ALICE detected particles known as charmonium, which are formed from the plasma, when quarks and gluons recombine. This shows that the particles were in a free state just before then. According to Cheshkov,“this is one of the clearest indications that a QGP really was produced.”

In addition, the scientists were also able to specify the nature of the quark-gluon plasma. While according to theoretical models, it was expected that the primordial Universe, given its enormously high temperature, resembled a gas, it turns out that its properties were probably more like those of a liquid; what’s more, a liquid of a very special kind, since it is able to flow without any friction at all – in other words, a state of matter with no known equivalent.

Tiny droplets of QGP have also recently been observed. Half way between an extensive plasma and a collection of particles, they bridge the gap between the elementary theory of quarks and gluons, and the hydrodynamic models of the QGP used to describe its expansion and cooling.

While the LHC has already provided some answers, it has also raised new questions, some of them mind-boggling. To find the solutions, all the teams are endeavouring to crank up the performance of the accelerator and detectors, which are scheduled to resume operation in 2021. Some of the upgrades are being carried out in preparation for what is called the High-Luminosity LHC, which, after all of the analysis hardware and software have been adapted, will from 2027 see the number of collisions per second increase at least five-fold at the centre of the detectors. As Vacavant points out, “to date we have collected only 5% of the data that the LHC will produce during its lifetime.” What will particle physicists find out when they analyse this mountain of data? No one knows. However, Vacavant is convinced that “in the constant dialectical relationship between theoretical and experimental advances, we are now in a phase where it is up to the experimenters to clear the ground ahead.” In any case, one thing is certain. The LHC’s first ten years are merely the beginning of this extraordinary scientific adventure.

Opinion
The thousand and one facets of glass
Accelerator

Slideshow
The Titans of CERN