This chimpanzee is eating a plant belonging to the family Phytolaccaceae, recognised for its therapeutic properties and widely used in the pharmaceutical industry.
J.-M. KRIEF
Share
Share
What if chimpanzees, or even insects, could help us find new cures for malaria or cancer? Welcome to the fascinating world of zoopharmacognosy.

Chimpanzees eating a piece of bark to treat gastrointestinal disorders; dolphins healing extensive injuries unaided… Over the last 20 years, there have been increasing observations of self-medication in animals, mainly in primates, but more recently in insects. Could this behavior inspire humans in their search for new medicines? In any event, there is currently an upsurge in this particular field of research: zoopharmacognosy or the study of natural substances consumed by animals for therapeutic purposes.

In France, veterinarian Sabrina Krief is a leading figure in this discipline. Since 2000, she decided to let her research be guided by chimpanzees. The reason? Perhaps all the accounts she discovered in the scientific literature of certain wild monkeys eating Aspilia leaves; coarse and covered in tiny bristles, these leaves cause the rapid expulsion of intestinal parasites. But the researcher was first led to investigate this subject during her first experience in the Congo. There, she studied orphaned chimpanzees raised by humans that, after being released in their natural habitat, added to their diet plants used in traditional medicine.

How do the great apes “know” exactly how to select those parts of plants that cure them while avoiding those that are harmful? What do these plants contain? To answer these questions and determine the extent of self-medication in these animal practices, Krief combined veterinarian and behavioral observation of chimpanzees with identification of the active substances contained in the plants selected by the animals to cure their ailments. The long-term goal was to test the propensity of these substances for transposition to humans and to propose their use in the design of new drugs. Since we share 98% of our genetic blueprint with our simian cousins, what is good for them may very well also be good for us. Attracted by the novelty of her approach, the Institut de chimie des substances naturelles (ICSN) at the CNRS, where she attended the classes of senior researcher and pharmacist Thierry Sevenet, was happy to welcome her into its ranks. Today, her co-workers are continuing their investigations at the institute.

Constantly seeking new substances, the primatologist, today a lecturer at the Muséum national d’histoire naturelle1 in Paris, divides her time between laboratory work and field assignments in the Kibale Park in Uganda, an exceptional observation point for studying primates in the wild. There in an area of 20 km2 at an altitude of over 1500 meters, in the heart of the equatorial forest, between swamps and pine and eucalyptus plantations, she tracks down chimpanzees that are sick or exhibiting unusual behavior, collects samples of their feces and urine, retrieves parts of the plants they have eaten (stem, leave, fruit, bark and root), and compares them to the 300 plant parts that make up their normal diet.

One of her more interesting discoveries is the residues of Albizia: a young female chimpanzee with gastrointestinal problems was observed one morning sitting on her own and chewing the bark of this large tree with a very bitter taste and which had been ignored by her group; two days later, the high parasitic load previously diagnosed in her feces had been eradicated. More recently, it has been established that chimpanzees in this group consume a dozen different plants capable of stemming the proliferation of Plasmodium, the parasite responsible for malaria. Krief also noted that the chimpanzees ingested certain plants mixed with earth, reflecting the pharmaceutical combination process used to optimize the efficacy of certain drugs. And this, of course, would impress any pharmacist. 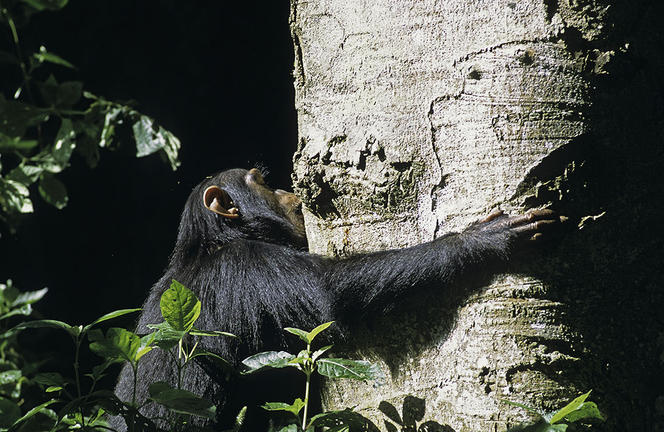 The bark of this tree, Albizia, is eaten by chimpanzees with gastrointestinal problems. 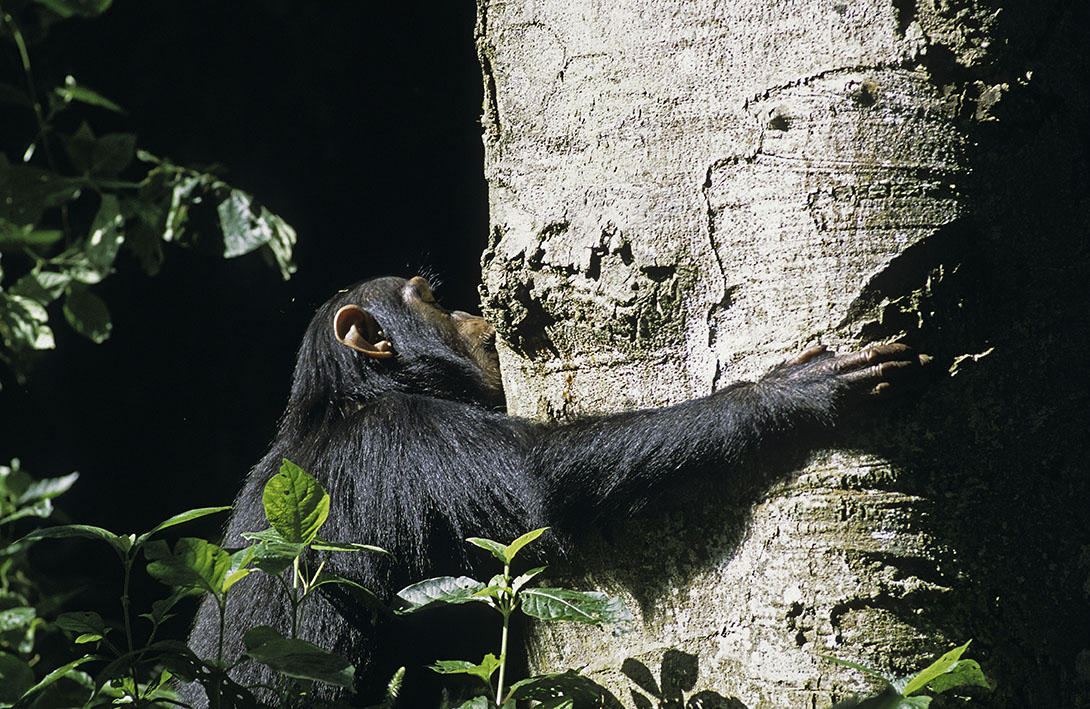 The bark of this tree, Albizia, is eaten by chimpanzees with gastrointestinal problems.
J.-M. KRIEF
J.-M. KRIEF
Share
Share

In all, after cross-referencing with the practices of local healers—whose approaches in many cases very interestingly coincide with those of the animals—almost a thousand plant extracts were selected by the researcher and her team. Ultimately, few were chosen: along with Albizia, a dozen other promising species such as the Trichilia tree, with its antimalarial properties, the bark of Markhamia, which exhibits antitumor properties, and the Warburgia tree were selected. The active substances of these plants were isolated after lengthy biological targeting studies involving the testing of antiparasitic, antibacterial, antifungal, antiviral and cytotoxic activity.

The origin of the behavior of these monkeys, today still a mystery, is the main question that continues to intrigue our researcher:2 “How did they acquire this knowledge? Is it innate or learned? We observed the use of different plants between separate but neighboring communities of chimpanzees, even though the same plant materials were available to all. Our investigations confirm today that at least part of the information involved is transmitted socially.”

What then of insects, whose self-medication practices constitute for Thierry Lefevre, researcher at the Mivegec laboratory3 in Montpellier, “the major discovery of the 2000s in this field”? That a species with more limited cognitive abilities than primates should also possess this type of faculty suggests that such behavior might result from an instinctive process commanded at the genetic level. This hypothesis was confirmed by several controlled studies on insects conducted in laboratories. “In particular, we have discovered that fruit flies can rid themselves of parasitoids by consuming alcohol, and that caterpillars only increase their absorption of a particular plant particularly rich in alkaloids after they have been infected by the larvae of a parasitoid wasp,” says the specialist, co-author of an article on animal self-medication published in Science.4

Another example: ant nests and beehives contain quantities of conifer resin, which exerts antifungal and antibacterial effects. Here we have an authentic preventive strategy! Other animals extend such health benefits to their relatives or their offspring, as may be seen in the monarch butterfly, in the first case of transgenerational self-medication to be described: although unable to cure itself, the female, when infected by a particularly nefarious parasite, successfully protected its offspring by laying its eggs on plants fatal to the intruder. Yet a true breakthrough could still be on its way: “If we were to discover that the female mosquitoes responsible for transmitting malaria, which are known to feed on flower nectar as well as blood, are also able capable of self-medication, this would represent a gigantic leap forward. One long-term perspective might be, for example to encircle human dwellings with plants that exert an antiparasitic effect on mosquitos,” explains Lefevre, whose research in Burkina Faso deals entirely with the subject. 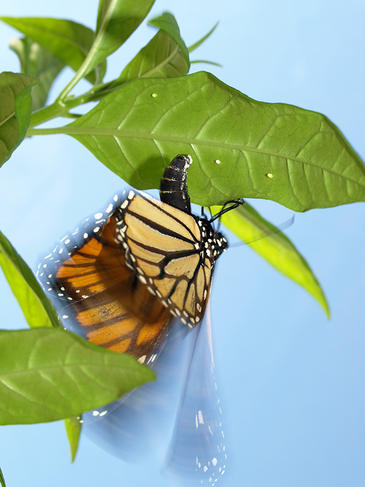 The female monarch butterfly does not lay its eggs at random. If infected by a parasite, it will choose to lay them on a plant that is fatal to the intruder. 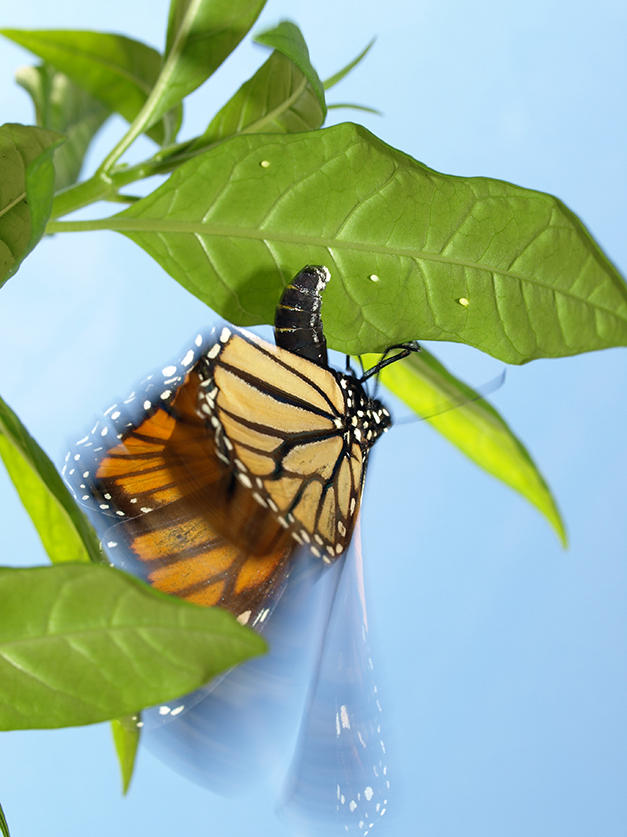 The female monarch butterfly does not lay its eggs at random. If infected by a parasite, it will choose to lay them on a plant that is fatal to the intruder.
JAAP DE ROODE
JAAP DE ROODE
Share
Share

From animal self-medications to medicines for human use?

So are medicines like these just around the corner? “We still have to wait,” says Krief. “Between collection in the forest and the market launch of a drug, there is generally an interim period of 10 to 15 years.” Furthermore, adds Sevenet, “we would have to find a new natural substance that is far more potent than existing drugs, and it would have to have a profile for use and a simple reproducible structure amenable to industrial production.” This is not the case today. It is therefore not certain that this particular path, although undoubtedly interesting, will be extremely effective, according to the emeritus senior researcher at CNRS. In the vast pharmacological quest to combat many hitherto incurable diseases, and where chance plays a crucial role, “we have to keep our eyes open,” he insists.

This article was originally published on lejournal.cnrs.fr in French in 2014.

Aurélie Sobocinski is a journalist. After starting her career in Paris, she now writes from Grenoble for national French publications. Author of a book on innovation in education, she is particularly interested in secondary schools and higher education and research.