Science Heads for the Big Screen(s)

Digiscope – Interaction of the Future

They’ve invaded our pockets, our living rooms, our offices and, little by little, they’ve conquered our public spaces. After a sprint towards miniaturization which saw screens reduced to handheld size, the tech industry is gambling on technology going the opposite direction: massive more interactive screens.

Here, on the outskirts of Paris, teams of researchers and engineers are developing visualization and immersion solutions to better serve scientific research. They call this one WILDER, a 75-screen mosaic installed on a wall covering 12 square meters which enables its users to literally step into the midst of its images.

Thanks to a resolution of over 70 million pixels, WILDER will help its users dive deeper into a variety of disciplines, all using the same tool. Visualizing physical objects like slices of the brain, maps, or other more abstract concepts can help the eye to detect inconsistencies or anomalies much more effectively than digital algorithms.

Quite unlike personal computers, which can only support a single user at a time, WILDER gives priority to collaborative work and therefore allows for new forms of interaction.

Michel Beaudoin – Chief Scientist on the Digiscope Project In order to integrate ourselves with these screens we have to reimagine everything that was already done to integrate us with desktop computers, laptops, and smartphones. In this context the screen is much larger, we move around while using it, and we often work with multiple people on the same screen. So we have to think about the kinds of interactions that will take advantage of both close proximity, for example touch, but also working from a distance, like with tablets. Everything has to be reinvented to give users the ability to manipulate whatever they’re visualizing in the most comfortable way possible.

WILDER’s screens are just one of the tools being developed within Digiscope, a collaborative platform that focuses on the study of using large format screens to work across a variety of disciplines.

Whether to advance scientific exploration, the design of complex objects, or help in decision making, Digiscope has created 11 tools to encourage the study of new forms of interaction between humans and machines.

Michel Beaudoin-Lafon Digiscope’s gamble is on putting new technology in the hands of researchers and seeing how they adapt them to their work. Now is the time to create more interactive devices that will benefit their teams. We need to observe how this alters their research practices, then combine their experiences and try to obtain solutions that can ultimately be put to use for each individual researcher while, at the same time, maintaining a generic appeal so that they can be applied across disciplines.

Among Digiscope’s 11 tools, a few are directly available to universities. At the ENS Paris-Saclay, virtual reality is on its way to becoming a viable teaching tool. Equipped with 3D glasses, the students are able to visualize a panoramic image of molecules and proteins projected on the classroom wall.

In the realms of molecular biology or fluid mechanics, this installation called SHIVA offers a particularly immersive experience: the ability to physically feel molecules in three dimensions.

Atmen Kedira – Virtual Reality Visualization Engineer We have the habit of representing virtual reality, in 3D specifically, as images that jump out of the screen. Unfortunately we can’t physically touch these images even as they pop out at us. To this end, we’ve developed a haptic system, robotic arms that enable the manipulation of these 3D objects hovering before the screen. Within bio-technology in particular, we’re able to use these arms to do what we call haptic docking, in other words watch as proteins and medicines interact, and make them collide within the projection so we can get an early sense of their interaction. In this way we can reduce the range of possibilities we would normally need to pursue in the midst of a traditional simulation, which saves a ton of time.

As we await the day these robotic arms are widely disseminated, other teams are studying the usage of simple physical objects that enable different interactions with our screens. Entirely capable of being personalized and inexpensive to make, these tokens force the user’s fingers into particular positions which provoke a reaction from tactile screens. Each token is then associated with a specific command and can launch an application or control precise elements in a digital interface. It’s another way to inject concrete reality into the relationships we have with our screens and imagine future links between humans and machines.

The Digiscope platform studies these new interactions in an intense manner within yet another device: EVE, a space completely dedicated to virtual reality. Directly connected to a wall of WILDER screens, EVE makes work possible at a distance and allows collaborators to visualize the same things on different systems.

Surrounded by screens over 5 meters high, the subject is plunged into an immersive visual and auditory environment thanks to spatial 3D surround sound. These conditions might generate discomfort in a user’s home but the engineers are working to offset them.

Jean-Marc Vesien – VR Engineer One thing in particular that we’re studying is called “simulation” or “cyber sickness.” The possibility for people to become sick when using this type of device. We expect these things and are obviously looking for ways to minimize their impact. Otherwise we’re studying particular ways in which to improve immersive experiences. We aren’t really surprised, but it’s always good to see how adaptable humans are, like how most people are perfectly capable of learning to use these systems in a matter of minutes. Thus it makes us confident that they will be widely accepted. Even so, we need to keep studying the best way to use them.

On the dawn of a possible digital revolution, science will drive the development of not only much larger screens but also screens much more useful for understanding the world around us.

A World, where the frontier between the real and the virtual has never seemed so thin.

Science Heads for the Big Screen(s)

Following the race towards miniaturization that has brought us the smaller touch sensitive screens we use every day, scientists are now trying to see a bigger picture. Thanks to increasingly innovative screens, they are designing a number of tools that allow unprecedented interactions between man and machine. Discover the future technologies being developed at France's Digiscope, a network of experimental platforms. 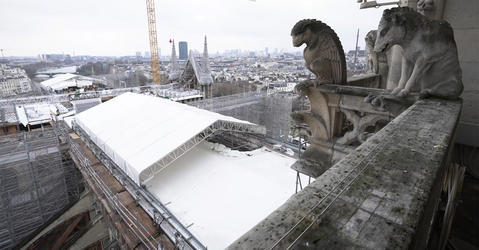