Finding Life in an Inferno

Finding Life in an Inferno

The Dallol site in Ethiopia has been sculpted by hot water rising up through the hydrothermal system.
O.GRUNEWALD
Share
Share
Last year, a group of scientists travelled to the hydrothermal site of Dallol in northern Ethiopia. In this extreme environment and against all odds, they discovered traces of life.

Seeing Dallol for the first time is like stepping onto another planet: hot-acid springs, phosphorescent green sulfur concretions, geysers spewing out toxic vapors, and brine pools make this site unlike any other environment on Earth. Located in Northeastern Ethiopia, a few kilometers from the border with Eritrea, Dallol resembles a dome of 15 square kilometers sculpted by the hot water that rises up through the hydrothermal system. Furthermore, the site rests on a two kilometer-thick salt bed right at the center of the Danakil depression, one of the hottest and most arid regions on the planet. It is barely conceivable that life could have taken residence in such inhospitable surroundings. Yet for the first time, this is what an international team of scientists1came to show.

In January 2016, this group, made up of microbiologists, geologists and crystallographers, scoured the site for two weeks.2 Their aim was to collect as many samples as possible (saltwater, hydrothermal fluids and acids, crusts, and so on) and to measure the physicochemical parameters prevailing within the basins and geysers scattered across the site. Very quickly, the scientists were struck by the levels of salt saturation, with certain brine pools approaching 50%, in other words, twice as salty as the Dead Sea. The pH levels recorded here broke all acidity records,  while temperatures regularly exceeded 100°C at the fissures of the geysers. 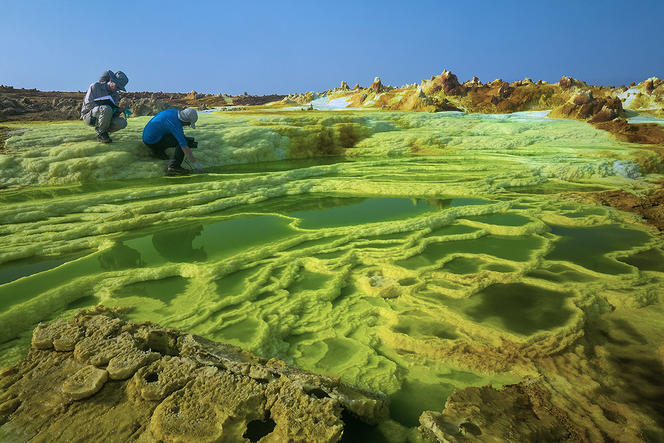 Scientists collecting samples (in this picture, Purificación López-García and Ludwig Jardillier). Certain brine pools have salinity levels that are twice those of the Dead Sea. 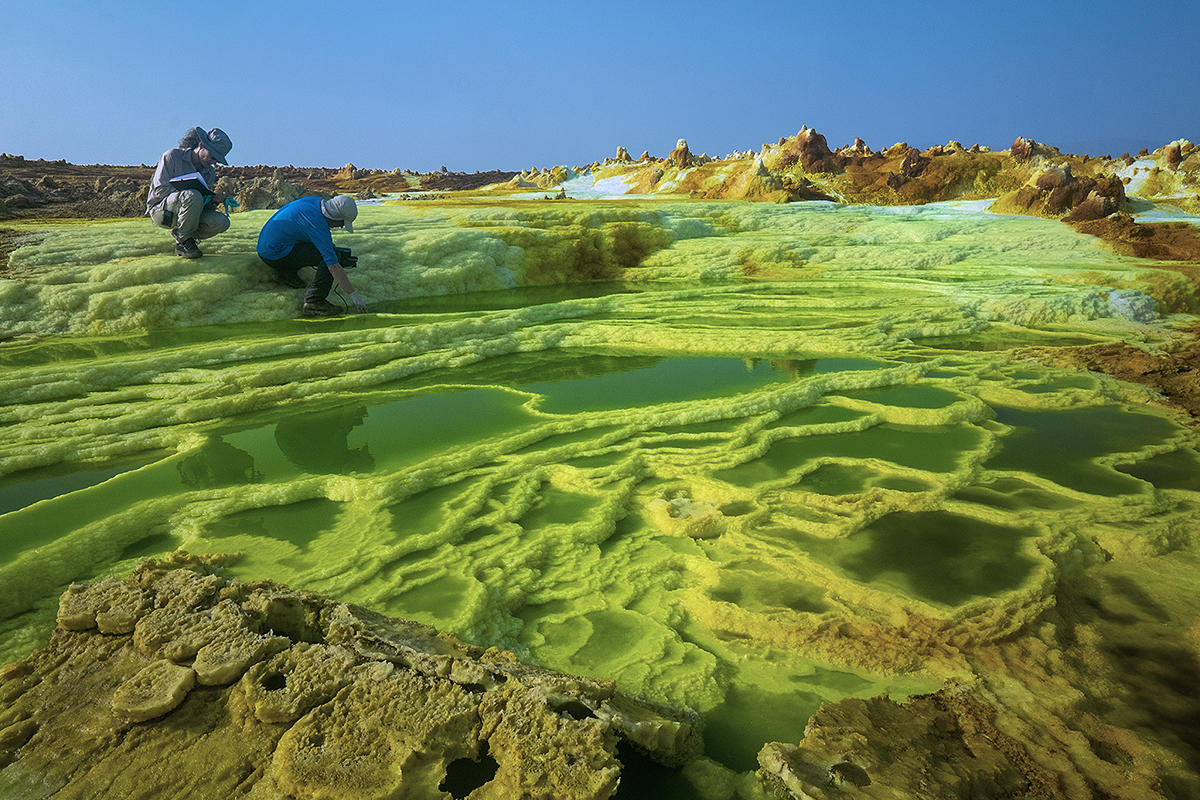 Scientists collecting samples (in this picture, Purificación López-García and Ludwig Jardillier). Certain brine pools have salinity levels that are twice those of the Dead Sea.
O.GRUNEWALD
O.GRUNEWALD
Share
Share

“Dallol is exceptional largely because of the coexistence of extreme values for these three parameters within a single environment,” points out CNRS senior researcher Purificación López-García, from the ESE3 in Orsay and organizer of the expedition, alongside team-member David Moreira. This specialist in ‘extremophilic’ microorganisms feels that Dallol could resemble common environments found on Earth over 3.5 billion years ago, when life first appeared on the planet: “Dallol is in fact a sort of open-sky scientific model that provides insight into how our planet functioned during an age when geology still prevailed over biology.”

Back in the labs

Upon her return to the Université Paris-Sud in Orsay, the biologist started to study the samples brought back from Ethiopia. The initial molecular analyses already revealed the presence of microorganisms in several samples. Using an electron microscope, the scientists also observed very small cells in a few samples. These were archaea, single-cell organisms morphologically similar to bacteria, many of which have a predilection for extreme environments such as the hydrothermal vents found in ocean ridges. “The astonishingly small size of the archaea cells we identified in our samples is undoubtedly the result of their adaptation to  environments with limited energy resources,” explains López-García. 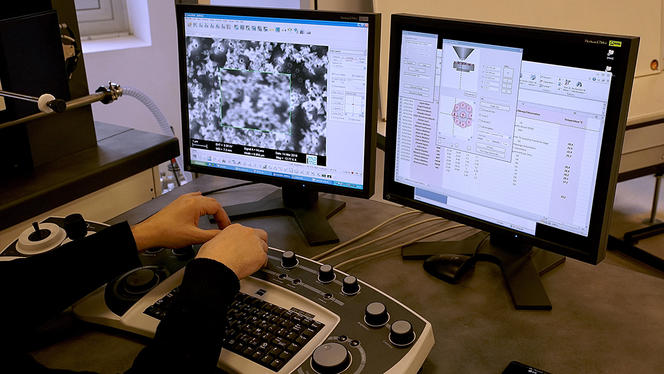 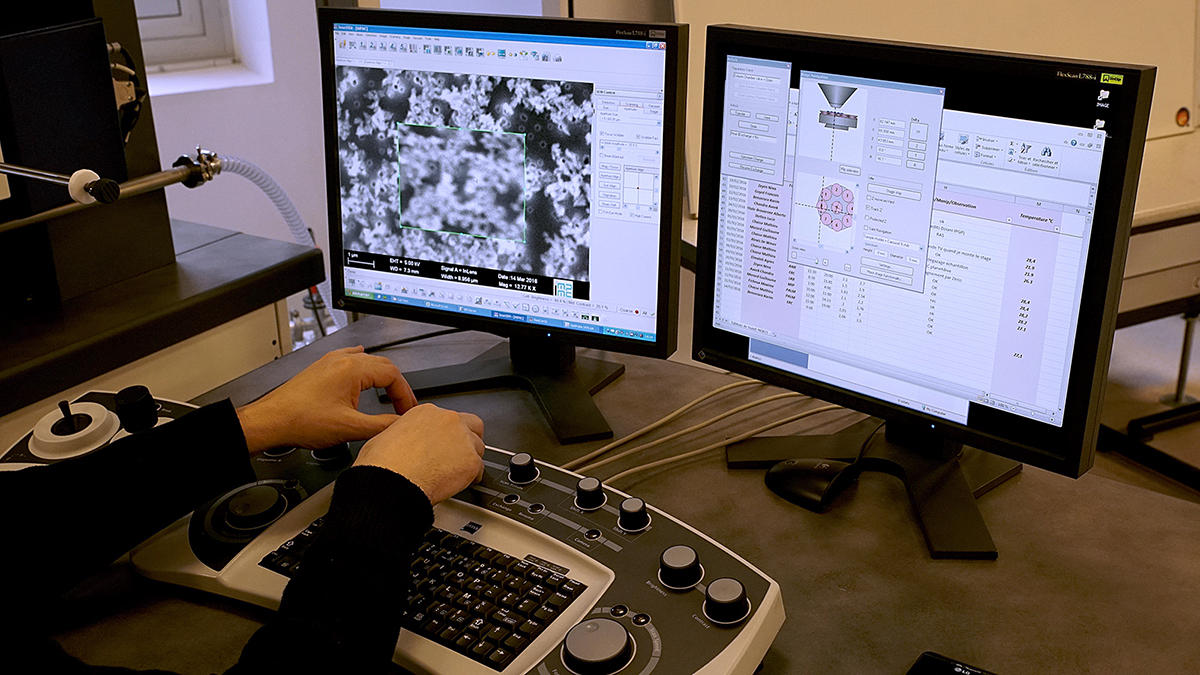 In addition to these findings, a handful of these microorganisms have been cultured in the laboratory. Thus, a few of these archaea are able to grow in salt and highly acidic culture media. Yet this surprising result by no means reflects the diversity of the microscopic bestiary of Dallol, as most microorganisms from natural samples are reluctant to grow in the laboratory. “Other ongoing studies that involve the analysis of marker genes characteristic of bacteria or archaea, as well as the analysis of their genomes, will help us assess this diversity and determine the molecular adaptations of these microorganisms to multi-extreme conditions,” adds the researcher. The preliminary findings of this environmental DNA analysis already showed that some of the Dallol microorganisms are very close—phylogenetically—to those found in brine pools near hot springs at the bottom of the Red Sea and the Mediterranean. “This backs the extremely widespread hypotheses that microbial dispersal followed by environmental selection explains the type of microorganisms present in a given ecosystems and that microorganisms adapt in similar ways to similar physicochemical conditions,” says López-García.

Although life at Dallol is now a certainty, many mysteries still surround the hydrothermal site. A further expedition may soon be organized to collect samples from hitherto unexplored regions of the dome. The researchers also plan to carry out isotopic analyses of the hydrocarbon-enriched fluids that they found especially intriguing during their first visit. “We would like to check whether this organic matter is entirely of biological origin or whether, on the contrary, part of it resulted from hydrothermal activity,” says López-García. “If this is the case, the environment around Dallol will also be of great interest for investigating the possible conditions under which life emerged on Earth.” 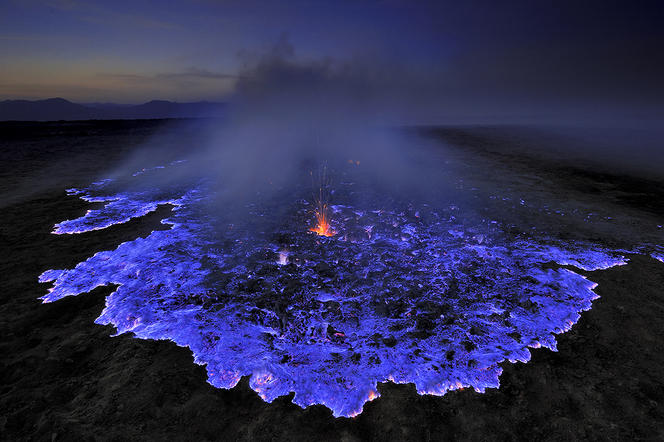 The sulfur particles present in the soil occasionally heat up and discharge these characteristic blue flames. 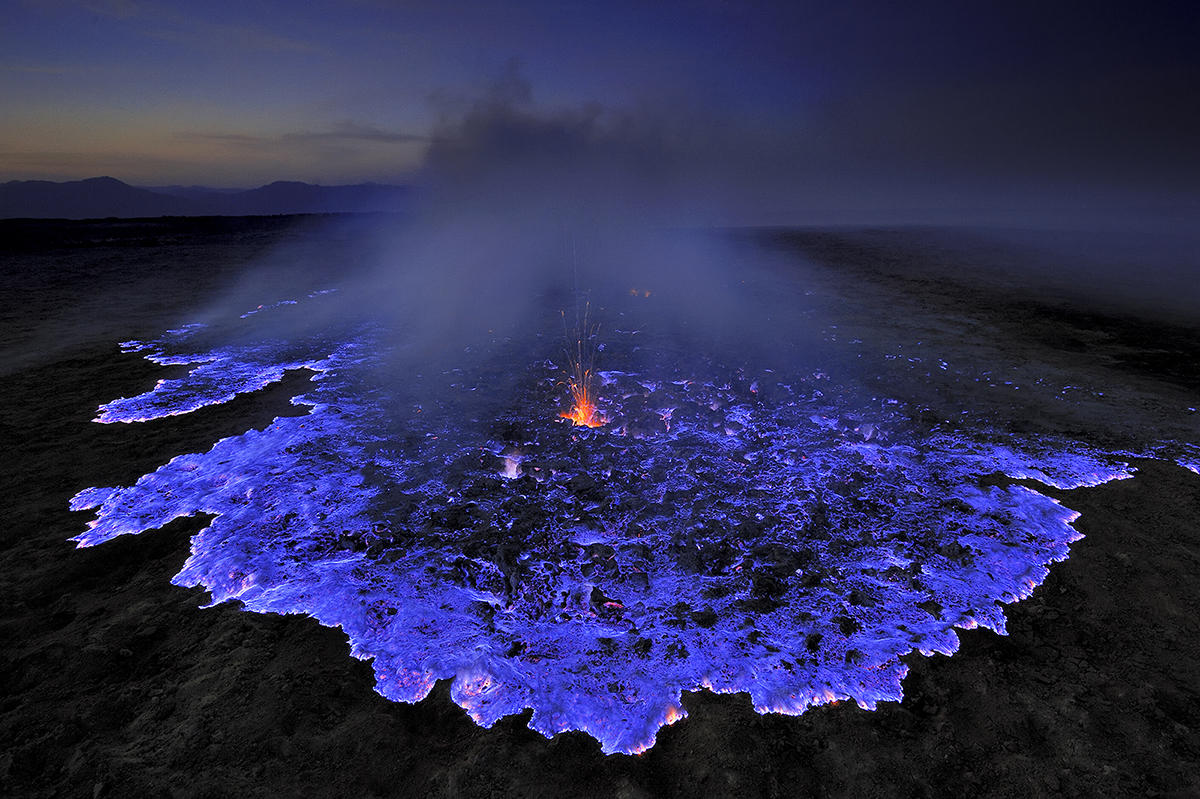 The sulfur particles present in the soil occasionally heat up and discharge these characteristic blue flames.
O.GRUNEWALD
O.GRUNEWALD
Share
Share

A quick return to the site is also the ambition of filmmaker Olivier Grunewald, whose documentary on Dallol was released this year.4 For this photographer, passionately interested in volcanology and at whose initiative the expedition took place in January 2016, there is an urgent need to better understand and protect this exceptional site. “We made this documentary to inform the general public about Dallol but also to alert the Ethiopian authorities about the need to protect the site since, as we speak, a project is afoot to mine potash, which is abundant in the subsoil of the region.” The scientists are concerned that large-scale extraction of this mineral will upset the underlying mechanisms of the Dallol hydrothermal system and eventually dry it up. To avoid the disappearance of this site, which has no equal on the planet, Grunewald and the research team under López-García are seeking to persuade the Ethiopian government to have it listed as a UNESCO World Heritage Site.

See author's bio
Astatine, an Ally against CancerPrevious
In the Days of Human ZoosNext